We are thrilled to announce the next edition of La Festa del Barolo, which will take place in Los Angeles on January 28, 2023 and in New York City from February 1 - 4, 2023. First held in 2011, La Festa del Barolo brings together growers, wine lovers from around the world and dozens of top sommeliers for a weekend event that is the ultimate Barolo experience. We have put together a tantalizing schedule for La Festa del Barolo 2023 in celebration of our upcoming tenth anniversary. We hope you will join us.

La Festa del Barolo 2023 kicks off with our first event in Los Angeles. We could not be more excited to do a Festa LA-style. The day starts with a walk-around tasting where guests will be able to sample several wines from each grower.

Later on, we will meet up for the BYOB Gala Dinner. Each grower will serve two library wines at their table, paired with Sal Marino’s brilliant cuisine. Guests are invited to share wines from their own cellars in what is sure to be a lively exchange of bottles. This is the night to bring out that rare old vintage, special magnum or unicorn wine you have been saving.

A Taste of Verduno

Our New York events begin with the first in our series of village dinners. Verduno is one of the most historic towns in Barolo, but until recently it has languished in the shadows of some of its more famous neighbors, perhaps because there are only a few estates located here. That has started to change as those estates have raised their game, in turn attracting considerable interest. Join us for this very special dinner featuring the wines of G.B. Burlotto, Castello di Verduno and Fratelli Alessandria. Hosted by Antonio Galloni.

Rare Wine Dinner: Bartolo Mascarello 1955 to… from Magnum (Waitlist Only)

"Bartolo Mascarello was the first grower I met in Piedmont, many years ago,” Antonio Galloni tells us. “I can’t think of a better tasting to help celebrate our tenth anniversary.” This intimate dinner is sure to be the event of a lifetime as we survey a number of the estate’s reference point wines. All the wines will be served from magnum with the exception of the oldest vintages, which will be poured from the traditional 1.9 liter bottiglione. Hosted by Antonio Galloni. Please note space for this event is extremely limited.

We are thrilled to welcome Aldo Vacca to New York City for this very special lunch. We will work our way through the nine 2017 Barbaresco Riservas and discuss the characteristics of each site. Furthermore, we will taste the new 2016 multi-vineyard Riserva, a wine the Produttori have made only a few times in their history, most recently in 1990. Hosted by Antonio Galloni. Please note space for this event is extremely limited.

We are delighted to welcome you to The Pool, New York City’s most iconic dining room, for what promises to be an extraordinary evening of wine, food and camaraderie. Fifteen leading Piemonte producers will each host a table and pour wines from their library. In the spirit of conviviality, we invite guests to share bottles from their own cellars. The Gala Dinner is the perfect occasion to open rare large formats and special bottles.

Antonio Galloni will moderate this very special masterclass tasting. Hear directly from the vintners as they discuss current vintages, recent trends and the influence of site during the 2018 Barolo Masterclass. Our Burgers & Barolo Winemaker Lunch, an annual tradition, will be held at The Grill following the tasting to cap things off in style. 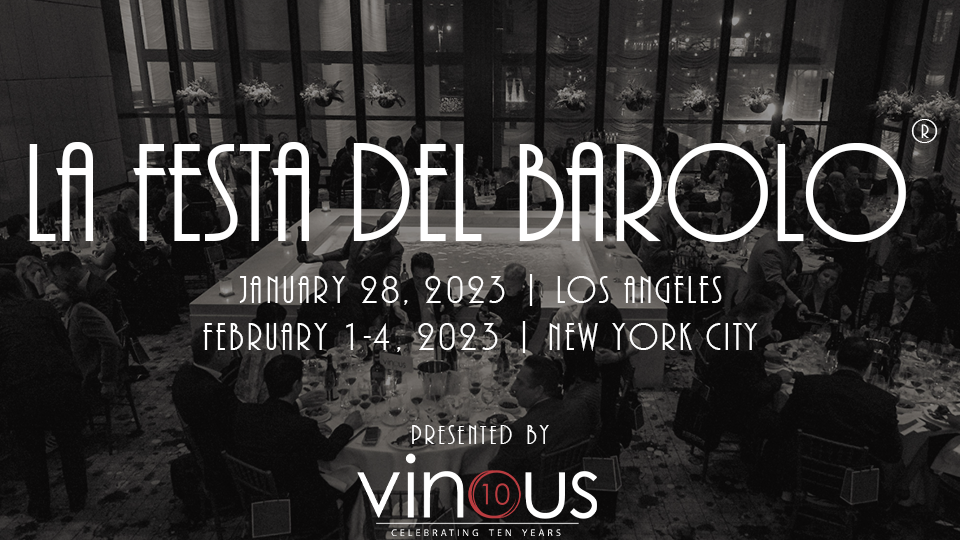 The above information is current as of September 26, 2022 and is subject to change.