It’s the rare wine among Mosel Rieslings of 2018 – a generally forthcoming, even effusive bunch – that seems to demand cellaring, and then usually only because a surfeit of sweetness is among a given wine’s generous-to-a-fault characteristics.

Continuing upstream, I offer my second of two reports on the 2018 vintage Mosel Rieslings, here including those from estates based along the Ruwer. Details concerning the nature of the 2018 growing season for German Riesling will be found, among other places on this website, in the extended introduction to my account of that vintage in the Nahe, as well as in my report that immediately preceded this one, covering the Mosel from Winningen to Wehlen. Most growers experienced their earliest-ever commencement of harvest because, even though the crop was abundant, and even allowing for locations where midsummer drought and heat caused vines to malinger or shut down, the cumulative effect of relatively ample ground water thanks to a very wet late winter, nearly unprecedented spring warmth, and early September rain to break the drought all made for metabolic precocity that no hurdles could prevent from crossing the threshold of full ripeness at a record early date.

For three decades, the top sites of Trittenheim and Leiwen have enjoyed many champions. Now, new pearls in the Mosel necklace are being polished. Beyond Leiwen, where the river disappears to the left, rises the Thörnicher Ritsch, championed by Karl Josef and Christopher Loewen; downstream from Trittenheim, the vineyards of Neumagen are being revived by (among others) Eva Clüsserath; and where the river disappears to the right can be seen Andreas Adams’ monopole Häs'chen, while high above it in a side valley looms Stefan Steinmetz’s newly acquired monopole, Dhroner Grosser Hengelberg.

Not How Soon but for How Long

Where the harvest itself differed most dramatically from one estate to another was less in starting time – though a minority of Middle Mosel growers, rather than beginning in the third week of September, waited until the end of that month or even the beginning of October – and more in how long they stayed at it. Analytically speaking, the grapes remained relatively stable through October, tempting some of those who reported an unusually leisurely and relaxed harvest to prolong picking through the end of that month, or, in rare instances, even beyond. In retrospect, the apparent stability of fruit after the third week in September may have been deceiving. Products gathered from mid-October on generally suffer a bit in terms of definition and complexity – even if those deficits don’t track with any quantifiable parameters. By contrast, to the extent that there were any decisive shifts in grape chemistry, these seem to have taken place in mid-September, in consequence of which even a difference in starting date of just a few days could significantly affect outcomes. 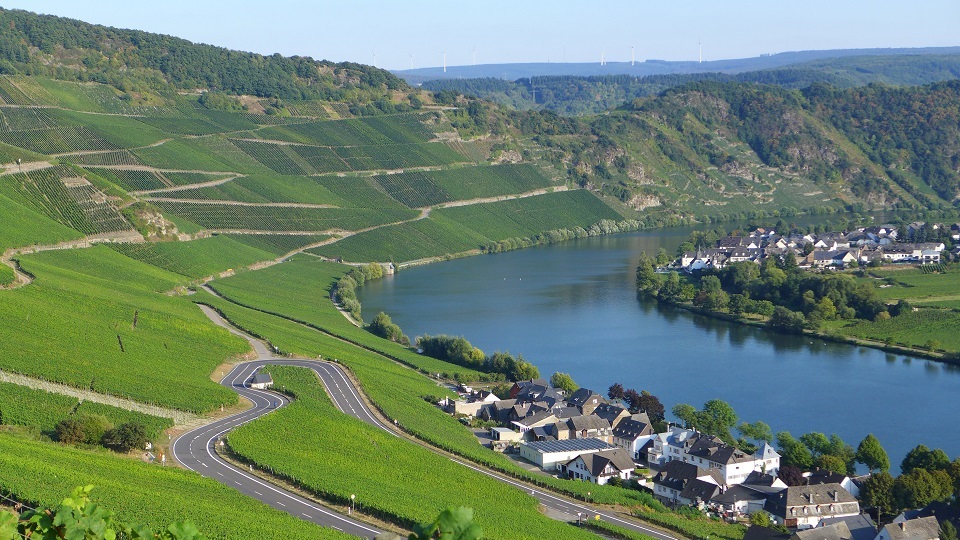 In 2018, the prodigious, often precocious Riesling-ripening proclivities of Piesporter Goldtröpfchen – whose downxfstream slopes, seen here, segue into ancient terraces in the Gunterslay – vexed some well-established growers while numerous others rendered exemplary bottlings.

Given the precocious and eventually advanced ripeness that prevailed, it’s natural enough to imagine 2018 as one of several recent vintages in which genuine Kabinett of the sort long familiar and well-loved on the Mosel would be difficult to achieve. Indeed, most growers acknowledge that it was a challenge. And yet, not a few of them succeeded brilliantly with vines from fruit picked in the mid-80s Oechsle or lower, while some (though by no means all) who attempted Kabinett from fruit in the upper 80s managed to avoid wines that taste as though they ought to have been labeled Spätlese. But those who succeeded with Kabinett almost universally agree that success was rarely possible outside of an extremely narrow mid-September window. “If we’d waited even two or three days, we would have gotten no Kabinett” was a frequent observation.

Precocious sugar accumulation in 2018 went hand in hand with acidity modest in its totality, albeit advantageously ripe (i.e., overwhelmingly tartaric). And many of the most successful producers opined that dwindling acidity as much as rising must weight was decisive in their choice of starting date. As discussed in my introductions to previous reports on this vintage as well as my coverage of a number of individual estates, various means by which acidity and freshness could be preserved – including early-morning harvest, chilling of grapes, and fractional pressing – proved critically important to overall quality. And even if this was not always reflected in the analyses of incoming musts, a striking characteristic of many vintage 2018 collections from the Mosel is an unprecedentedly wide range of finished acidities, which at the low end often dip far below seven grams per liter. That wines in the latter range so often manage to avoid tasting overly soft is to a significant extent a result of low levels of dry extract and consequently of buffering potassium, a circumstance evidenced by pH levels that are surprisingly low relative to total acidity. 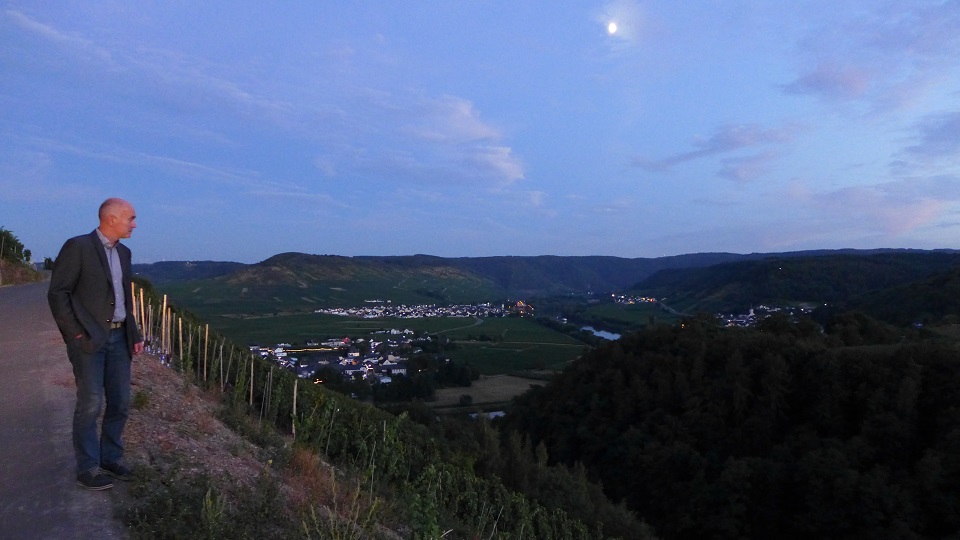 Karl Josef Loewen – already a past master at reviving the reputations of once-renowned vineyards – struggled for more than a decade to acquire a piece of Thörnicher Ritsch. In 2018, his 22nd outing with this site, he and his son Christopher managed their arguably finest-ever dry Ritsch as well as an outstanding Auslese.

Another striking feature of vintage 2018 on the Mosel is the very different sorts of collections from one estate to another, only sometimes traceable to local weather characteristics, such as how much rain fell in early September. Especially striking are the variations as regards nobly sweet wines. Julian Haart – who succeeded brilliantly in 2018 – did so with a collection that tops out at Spätlese; many other growers cited paucity of botrytis as grounds for rendering few if any nobly sweet wines. On the other hand, there are vintage 2018 collections with unprecedentedly many Auslesen, Beerenauslesen and Trockenbeerenauslesen, including those of Grünhaus and Karthäuserhof on the Ruwer, which represent high points in the recent history of those estates. Haart insisted that to achieve Auslese in 2018 in his sector “you had to have a much larger surface area than I do in any given Einzellage across which to search and select.” And yet, nearby Andreas Adam, with an equivalent but even more morcellated surface area than Haart’s, harvested two Auslesen and a BA. 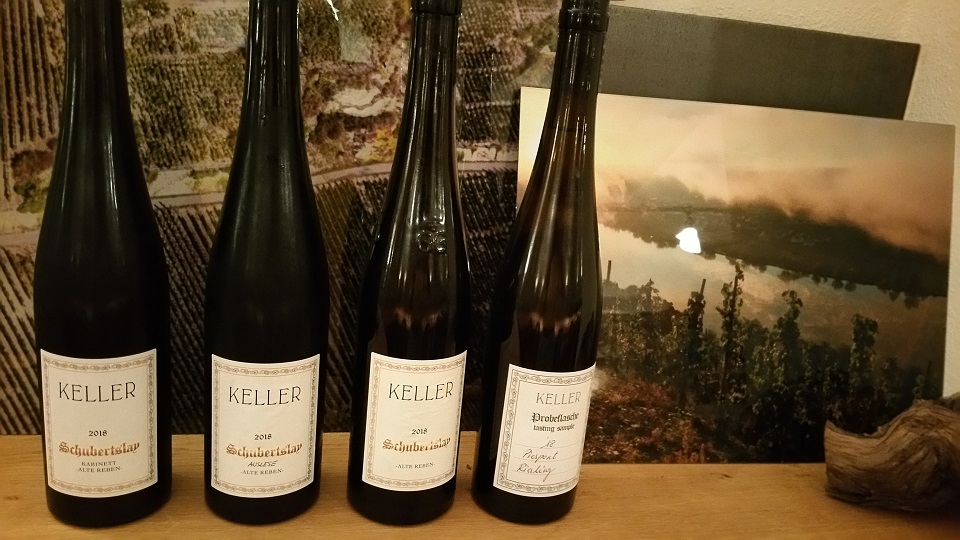 Klaus Peter Keller’s inaugural collection of bottlings from the Piesporter Schubertslay more than lives up to universally high expectations, and he had already appointed a niche in his tiny subterranean tasting room to showcase them.

Portfolios this year also differ strikingly in sheer number of wines, a fact that reflects not just divergent raw material but grower habit and grower aesthetic. In some instances, paucity of botrytis for nobly sweet wine or failure to pick early enough to achieve an estate’s usual contingent of Kabinetts led to a relatively truncated collection. Furthermore, some growers judged the differences in character from one lot to another insufficient to justify their usual practice of bottling multiple wines from the same Einzellage in the same Prädikat. This, coupled with 2018’s generous yields, results in certain wines that represent record high production volumes. On the other hand, among growers who habitually bottle small lots representing just one or two fuders and single or adjacent days of picking – Weingut Willi Haag being a striking example – 2018’s abundance is reflected in a virtually exceptional multiplicity of bottlings.

It would be misleading – and, indeed, futile – to generalize concerning which styles of Mosel Riesling proved most successful in 2018. And the already mentioned sources of diversity do not entirely account for that fact. Luck, an eye for opportunity and a balancing act in picking, pressing, vinification and élevage to optimize the potential of one’s grapes meant that in any given category – dry, Kabinett, Spätlese, nobly sweet – one grower scored striking success while another, whose long-term track record is similar, disappointed. But one broad observation is worth noting: “Easy” though 2018 may in some respects have struck most growers as being – offering abundant healthy, very ripe grapes amid gorgeous mid-September to early November weather – it is a year that separates characteristic overachievers from the pack. The list of Mosel estates that turned in any truly extraordinary 2018s is modest as well as predictable. 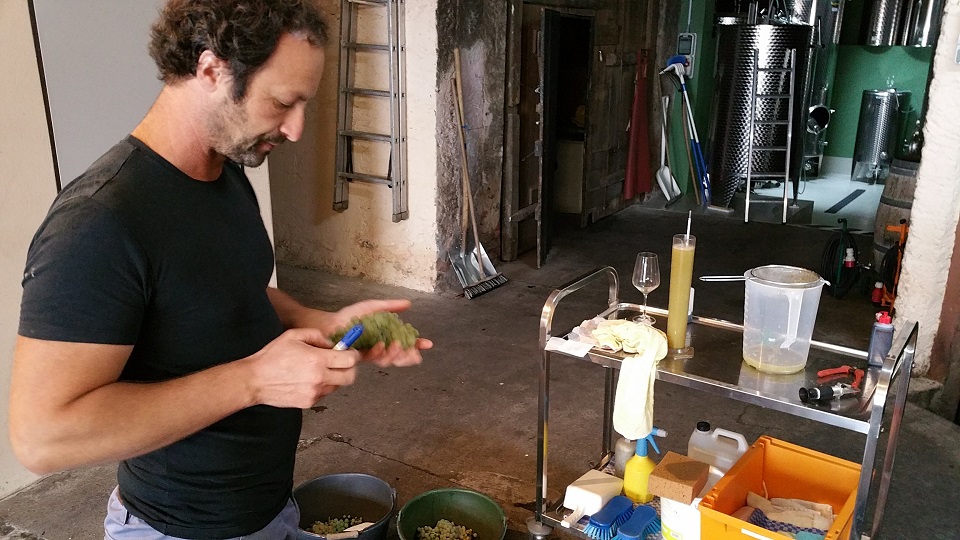 When I visited with Andreas Adam on September 13, 2018, his inaugural Pinot Noir was already cold-soaking, and he was sampling Riesling to determine which parcel would get picked the following day, “I’m not into playing poker,” he said. “75 Oechsle can easily become 90, and 9.5 acidity rather suddenly become 7.5, and then you’re in trouble.”

This report, covering the stretch of Mosel from Graach to Grünhaus, is based on visits with 29 producers – 24 along the Mosel proper and five along the Ruwer – in September and November 2019, supplemented by subsequent stateside assessment of samples that included wines from two further estates that I did not visit. Since I group my reports according to winery location, this part of my Mosel report incorporates extensive notes on the always important Saar Rieslings from Reichsgraf von Kesselstatt and Nik Weis (St. Urbans-Hof), just as my previous report “From Winningen to Wehlen” – covering 23 estates – incorporated Saar Rieslings of Markus Molitor.

Conventions regarding nomenclature and scoring are those followed in my past reports and detailed in the introductions to my coverage of vintage 2015 and 2014 German Rieslings. I reference A.P. (official registration) numbers only where this is necessary to disambiguate two otherwise eponymous wines; the registration number is assumed to be that of the year following the vintage, unless otherwise indicated. Any wine not tasted since it was bottled is, as usual, allotted a point spread rather than a single numerical rating. I rarely review a wine I have rated 86 points or lower, but I make exceptions in instances where such a wine represents good value, or a disappointment about which I think readers deserve to know in detail.