In the 130 years that precise records have been kept, the Rheingau winter of 2015-2016 was the second warmest cumulatively. Two thousand-sixteen also boasted – if that’s the word – both the warmest September and among the rainiest Junes ever. “We never got a break,” related Andreas Spreitzer, “or at least not until late in the game.” Constant rain was followed by relentless heat and drought. Those stressful conditions put particular pressure on certain sectors of the Rheingau. Thanks to optimal October weather, the relative paucity of botrytis, and must weights that increased only slowly, the 2016 harvest was not badly suited, terrain permitting, to mechanized picking, which is nowadays a fact of life for many large Rheingau estates. But strategic canopy management and leaf removal combined with immediate pinpoint reaction to peronospora (downy mildew) were critical during the wet late spring and early summer, not just to salvage the crop, but also to optimize eventual quality. And in those respects, growers relying on machines or simply short on labor were bound to be at a significant disadvantage. 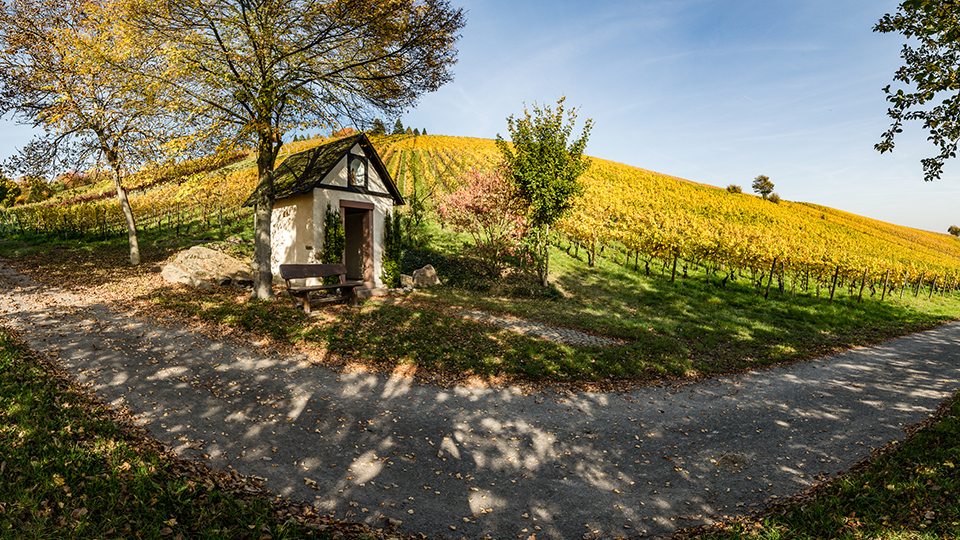 Among the highest-altitude, breeziest Rheingau sites, the Hendelberg – notwithstanding its VDP classification as an "Erste-" rather than a "Grosse-Lage" – is showing its advantages in an era of global warming, with exciting recent Rieslings from Kühn, Prinz and Spreitzer.

Handiwork in the Pursuit of Harmony

Spreitzer observed that “if you rigorously de-leaf during a wet spring you increase the danger that peronospora will attack the embryonic flowerlets.” That is precisely what happened on a wide scale in 2016, even to growers acutely aware of the aforementioned danger. What’s more, aggressive leaf removal and hedging eventually left grapes vulnerable to sunburn, subject to unfavorable phenolic evolution, and unable to take full advantage of 2016’s October opportunity. Much of the Rheingau is farmed without cover crop, and the resulting lack of competition increased the tendency for vines to become accustomed to water without end, leaving them unprepared for the shock when conditions radically dried up from late July through early October. As I have had occasion to mention several times in my recent reports, growers are becoming increasingly convinced of how critical a factor the vine’s accommodation to conditions early in the growing season is. Success during the almost unremittingly dry, warm 2015 growing season, for example, likely owes much to precisely how unremitting it was. That year, vines were already starved for water when their sap began to rise, then throughout the spring, and their response to this early deprivation prepared them to get through the hot, dry summer with minimal stress and to eventually produce fruit with generous but not excessive must weights and ample acidity.

The more successful Rheingau (and Mittelrhein) producers in 2016 harvested late enough to have benefited from cool, clear October weather to make wines full of ripe flavors and featuring modest but more than adequate natural alcohol and acidity (the latter strongly weighted toward efficacious and appealing tartaric). Like so many of Germany’s genuinely exciting 2016s, the best wines from these regions represent even-tempered, harmonious, at times understated results from an extreme growing season. Quality is highly variable, though, as has become the norm for these regions due both to differences in the degree of diligence and preparedness from one grower to the next, as well as to the often strikingly different conditions from one site to another. 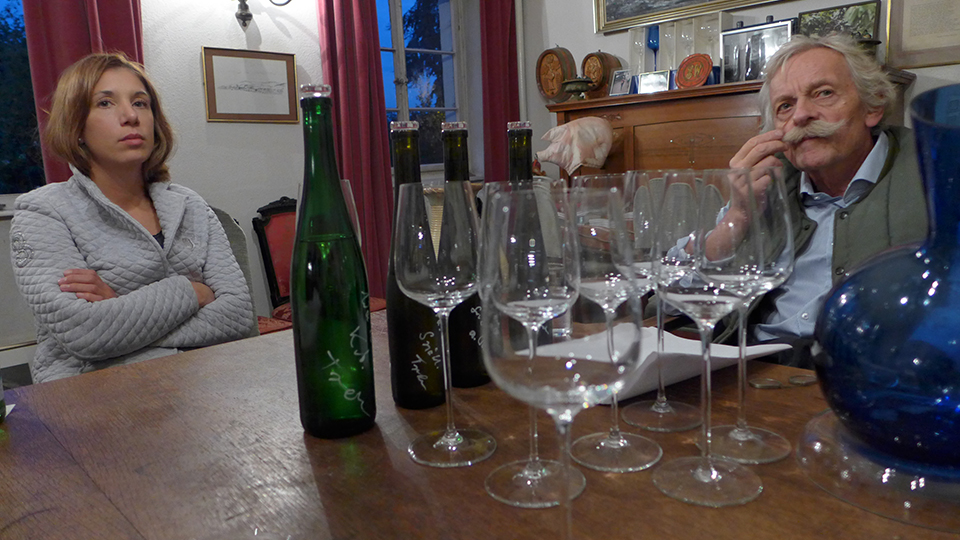 Veteran Hans-Josef "Hajo" Becker cut his viticultural teeth and conceived his stylistic ideals for Rheingau Riesling and Pinot in the mid-sixties, upending practices at his family's Walluf estate. He and wife Maria apply methods that today count as retro, but are no less radical or superbly successful than they were a half century ago.

More Than One Vintage in a Year?

In the Rheingau, a given growing season’s overall weather pattern can have very diverse effects, at times so much so that growers in one sector will enjoy an outstanding vintage and those farming nearby a troubled one. At first glance, this disparity seems hard to square with the gross geographical facts. The Rheingau, after all, is significantly smaller in vine surface than the Nahe and is dwarfed by Rheinhessen, the Pfalz and the Mosel. Moreover, it is much more compact than those other Riesling-dominated regions, consisting of a nearly unbroken stretch of vineyards paralleling the Rhine for just 20 miles (plus several miles along the Main at Hochheim).

The critical contributors to disparate viticultural outcomes in a particular vintage are elevation, incline, and the influence of the Rhine. The string of vineyards that is strongly influenced by the heat retention, humidity and reflectivity of the Rhine ranges in altitude from 250 to 400 feet above sea level and features gentle slopes. A higher strip of vineyards paralleling those nearer the Rhine and ascending into the Taunus Hills – typically at 500 to 600 feet and occasionally approaching 1,000 feet above sea level – is strongly influenced by that range’s forests and breezes, and is often steep. (Certain outsized official sites, such as Oestricher Doosberg, stretch all the way from the Rhine shore far up into the hills, but their microclimatic heterogeneity merely illustrates my point.) Vineyards nearer the Rhine bore the brunt of fungal pressure during the wet half of 2016, then often ended up being picked significantly earlier in response to rising must weights and falling acidity.

As for the Mittelrhein, Germany’s smallest Riesling-centric region (and the one most dominated by that grape), with only 15 miles that separate Boppard and Bacharach, the two villages around which the majority of this region’s vine acreage and top sites are clustered, ripening conditions are often quite different, and for reasons not dissimilar to those responsible for the Rheingau’s disparities. Boppard’s vineyards are nearly all directly exposed to a broad stretch of the Rhine, whereas around Bacharach (with the notable exception of the Hahn vineyard) vines favor several narrow side valleys that conduct cool air from elevated forests to the west. Rapidly rising must weights and falling acidity, while rarely problematic in 2016, challenged Florian Weingart’s Boppard vineyards just as they did certain riverside Rheingau sites. 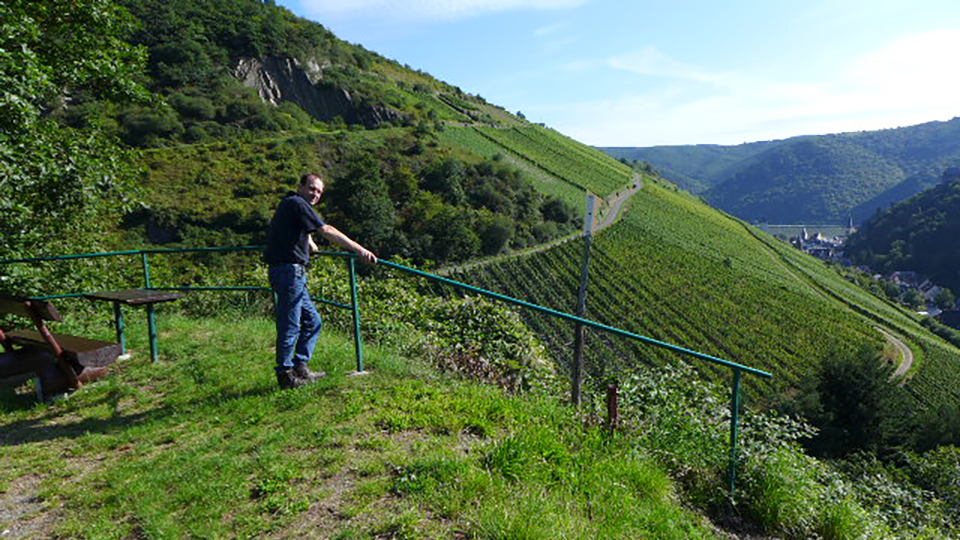 Farming a side valley above Bacharach, the Jochen Ratzenbergers – Junior (depicted) and Senior – achieved a focus, brightness and energy from vintage 2016 not approached by other Mittelrhein Rieslings of that vintage.

It takes little imagination to realize that recent tendencies toward extremes in precipitation, more precocious growing seasons, and harvests in warmer weather tend to favor cooler, better ventilated and faster-draining sites. What is needed to counteract the challenges of warmer sites more susceptible to fungal infection is above all meticulous and well-strategized canopy and soil management combined with skilled picking crews that can be rapidly mustered and flexibly deployed. But those criteria are hard to meet in an era of increasing mechanization and escalating labor costs, especially for the Rheingau’s numerous huge and cash-strapped estates.

Under present circumstances, it’s hard to imagine that the vineyard pecking order prevailing in this prestigious region when Thomas Jefferson toured and wrote in perceptive detail about it in 1788 and still in place 200 years later will survive the climatic changes that have been taking place since. In fact, 1988 is in retrospect the watershed year, since which there has not been a single vintage featuring the sort of outright ripeness deficiency that before then characterized at least several harvests each decade. And there have been only two near-disastrous subsequent vintages, 2000 and 2006, both years in which advanced ripeness coupled with semi-tropical, botrytis-breeding conditions near harvest were the culprits, and many renowned riverside sites in the Rheingau were among the hardest hit.

Which leads me (although what follows aren’t merely observations about the Rheingau) to call attention to the pre-emptory, presumptuous, sometimes downright petty and perhaps ultimately counterproductive nature of the VDP’s recent attempts to classify its members’ vineyards into three categories: Grosse Lagen, Erste Lagen and Lagen. Permitting only approximate equivalents to “Grand” or “Premier” Cru vineyards to even be mentioned (Chablis similarly rules out labeling with site names other than those of Grand or Premier Crus) means kicking away the ladder those sites climbed in order to achieve their reputations in the first place, because a consumer can’t value what he or she isn’t even allowed to recognize. My tasting experience casts doubt on many of the decisions that have been made by the VDP regarding which sites should have “Grosse Lage” and which “Erste Lage” status. (And it should be noted that some of the VDP’s regional branches, notably that of the Mosel, have declined to undertake this sorting into what are in effect Grand and Premier Crus.) I often find an Erste Lage bottling more exciting, complex and deliciously distinctive than a far more expensive Grosse Lage bottling in the same cellar. At times, I attribute this to the fact that Grosse Lagen are usually those sites associated with higher must weights, a dubious distinction in an era of global warming. Moreover, as Andreas Spreitzer observes – and this applies to many other growers I visit – “it’s not as though I prune vines destined for wine designated ‘Erste Lage’ to achieve the slightest bit higher yield or am any less rigorous in my viticultural regimen generally than I am with vines that inform my three Grosse Gewächse.” 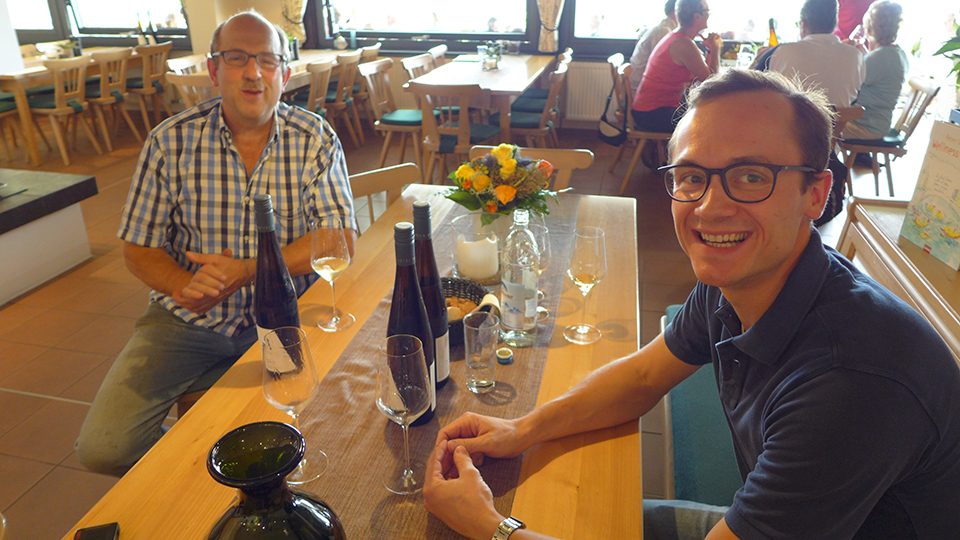 Some recent changes in ownership and newly-constituted estates (like Weingut Kaufmann, profiled in this report) give hope for a broad Rheingau revival. But some of this region's talents have been hiding in plain sight for decades, like Gerd and son Johannes Gross of Weingut Goldatzel, whose fierce viticultural dedication may have been overlooked by critics due to a style that makes no attempt to be trendy, or to their family's being primarily associated with a restaurant popular among locals as well as tourists.

As I mentioned in my introductions to previous coverage of this region, there are welcome instances of top-notch Rheingau growers with whom I simply wasn’t familiar belatedly coming to my attention. The Bischöfliche Weingüter in Rüdesheim and Weingut Goldatzel in Johannisberg are prime examples; and no fewer than three more potentially promising estates of long standing are in my sights for an upcoming tasting tour. There is even a newcomer on whom to report: Weingut Kaufmann in Hattenheim, whose first three vintages I canvas in the present report. Even so, it’s hard not to remain a bit exasperated with this renowned region, given the many formerly prestigious estates that are nowadays underperforming, and in recognition of so many traditionally outstanding sites that are being manifestly given far less than their viticultural due.

This report is based on visits with 15 Rheingau and 4 Mittelrhein growers between late July and mid-September of 2017, supplemented by tastings of samples that included nearly complete collections from two additional Rheingau growers plus a few 2016s from a third. Following usual Vinous practice, scores on those few wines that I have not tasted since they were bottled are expressed in parentheses as point ranges. Wines I rated 86 points or lower are frequently alluded to but generally not accorded a tasting note. I make exceptions to that rule for wines I still deem good values or where I think a tasting note will demonstrate some important point (which might be that I believe the wine in question is routinely overrated or perhaps that its latest, disappointing performance requires special explanation).