Oregon: An Embarrassment of Riches and Richness

Two thousand sixteen is yet another link in an unprecedented chain of outstanding vintages in the Willamette Valley that began in 2014 and has now extended to 2018. Compared to the ‘14s and ‘15s, the ‘16s, while on the rich side for Pinot Noir, show more freshness than wines of the previous years at a similar stage.

The 2016 vintage in Oregon’s Willamette Valley was yet another for the record books in terms of quality. The Pinots in this report are bound to make Oregon fans extremely happy. Even better, the crop was abundant, meaning that even some of the most in-demand or allocated wines will be easier to hunt down than usual.

The winter of 2015/2016 was marked by steady rain, which benefitted the groundwater and set the stage for thriving vines. Budbreak occurred anywhere from two weeks to a month earlier than normal. The warm spring that followed pushed the fruit along. Favorable weather extended through a dry summer that experienced only a few, virtually insignificant and brief heat spikes. Harvest began in many vineyards in late August, by early September things were in full swing across the region. The grapes were exceptionally clean and rot-free, not to mention the berries’ small size gave higher than normal skin-to-juice ratios. That said, I seldom encountered wines that showed uncommonly high tannin levels or astringency, instead I found a huge number of generous but well-balanced, energetic wines where silky, well-knit tannins are the rule. The best examples, and there a lot of them, should provide pleasure throughout their lives. I also get the sense that those lives will be long because of the wines’ concentration and fruit intensity. 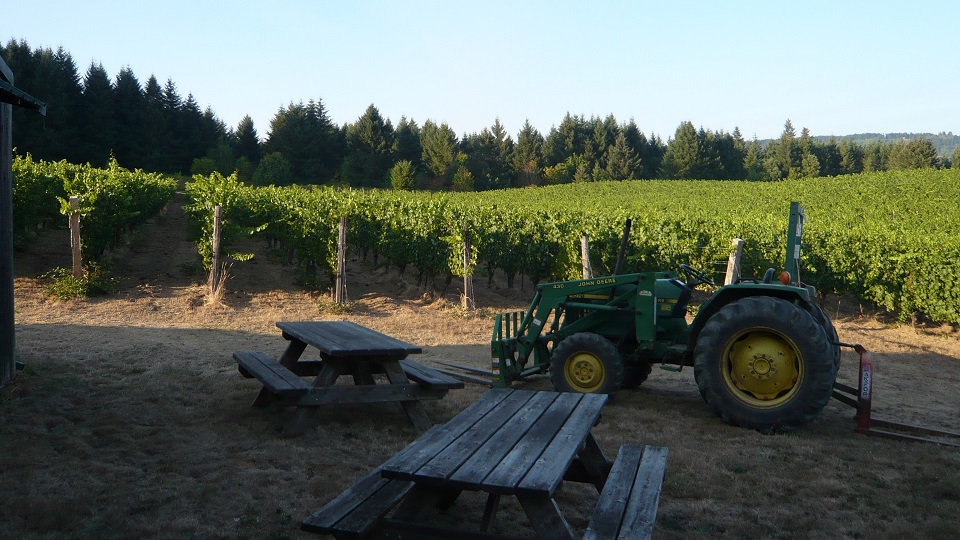 Afternoon at Brick House vineyard, one of the first in the United States to be farmed biodynamically.

Taking Another Look at 2015

Meanwhile, there are still a few top-notch 2015s in the market, mostly from late-bottling producers or those who opted to hold their wines back for a spell before releasing them. Two thousand fifteen is proving to be an outstanding vintage, with the best wines delivering a compelling if unlikely blend of depth, power and energy. It was the hottest year ever in Oregon’s recorded history, not just the Willamette Valley. Dry weather was mostly the rule until the end of August, when welcome rains arrived to refresh the parched vineyards. Those sites with old vines, with their deep root systems, were obviously at an advantage, as were vineyards that have irrigation systems, which were especially valuable for younger, more fragile plantings. Late August rain, coupled with a cool September, ensured healthy acidity in the grapes. Most of the fruit was picked on the earlier side, in mid- to late September, under optimal conditions. It was a high-yielding crop as well, but the wines quite clearly don’t show any sign of dilution – quite the contrary, in fact. The mostly large-scaled wines that were produced are, in many cases, already showing well but, in spite of what one might expect given the weather, the best wines are surprisingly balanced as well, with distinct red fruit character usually leading the way. 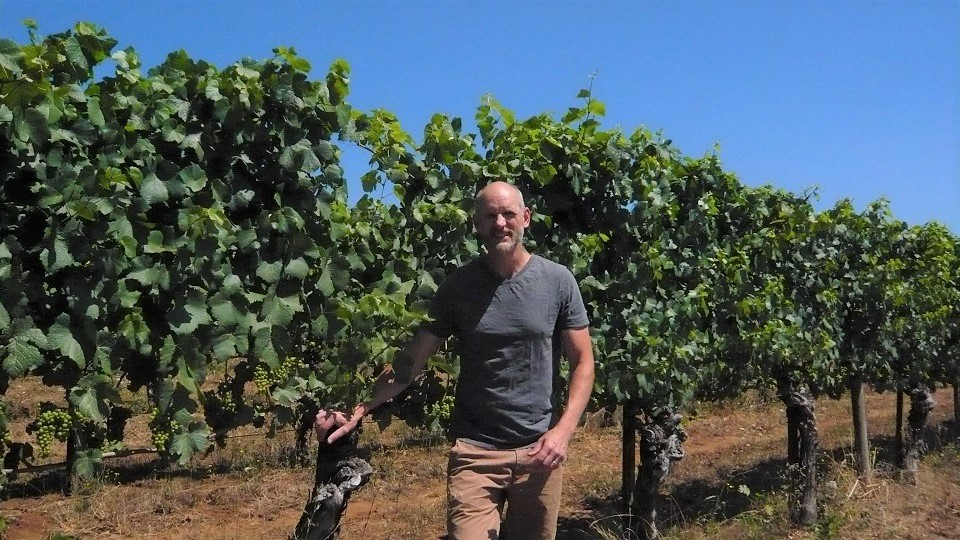 A number of producers have recently released or soon will be releasing their 2017s and all signs point to yet another outstanding vintage, especially for Pinot lovers who like their wines fruity and extroverted. By the standards of the immediately preceding vintages (meaning back to 2014) 2017 was a cooler year, but many of the wines show plenty of depth and power at this stage. The vintage began with an uncommonly cold winter that was followed by a cool, rainy spring that delayed budbreak. The weather turned warm in the summer, which, again, was quite dry, with, thankfully, mostly cool nights. Those conditions kept ripeness in check while yields were potentially enormous. The best growers thinned their vines through the season so dilution from heavy crop loads was mostly avoided. Make no mistake, the 2017s are definitely in the mold of the ’16, ’15, ’14 and ’12 vintages as they generally show lush, fruity character and lean toward power far more than delicacy. That means readers who favor Pinots from cooler years such as 2013 and 2011 and the more taut, restrained wines that they produced, will have to choose carefully. 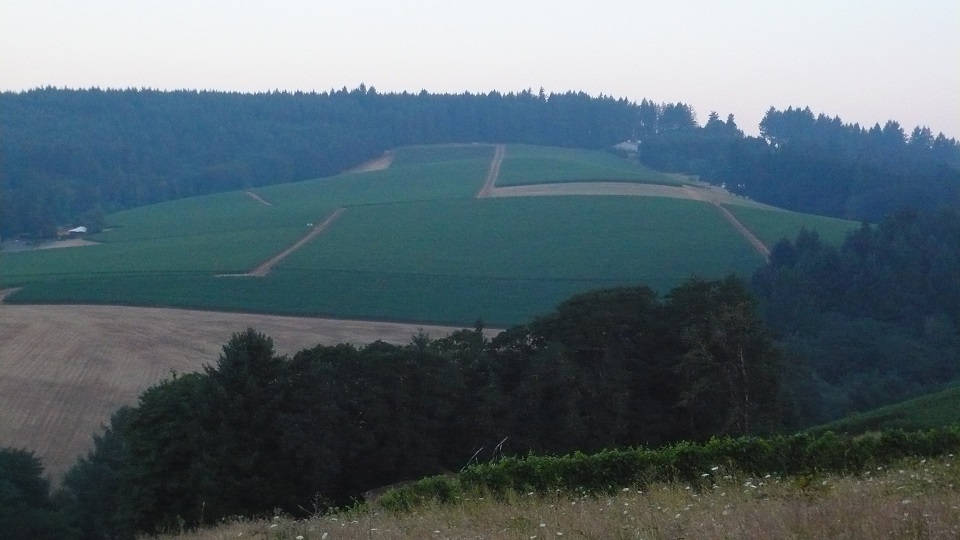 Early morning at the Knudsen vineyard, which was first planted in 1972, making it one of the oldest in the Willamette Valley.

The 2018s are obviously still infants, but hopes are high for what is looking like yet another excellent, highly consistent vintage. As with the preceding years, the weather was warm to hot through the summer but there were no significant heat events, which kept sugars in check (by current-day standards) and acidity at healthy levels. September was quite cool, which further helped to keep the fruit fresh. Once again, the crop was generous, much to the delight of growers, winemakers and bean-counters. 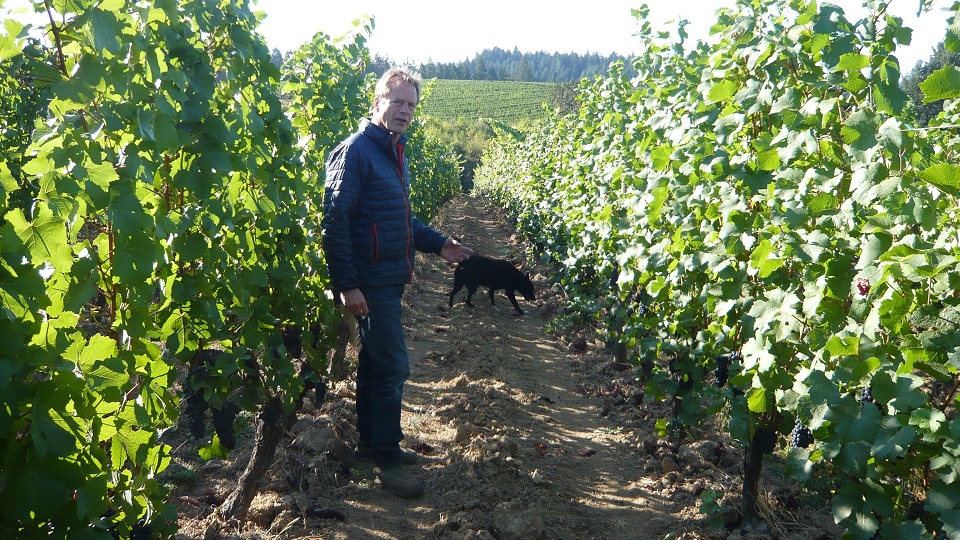 Mike Etzel, in the Beaux Frères vineyard, which he began as a five-acre planting in 1988.

It is no surprise that demand for the best and/or most limited bottlings has helped to push prices up as the Willamette Valley wine industry has matured and its wines have become visible fixtures in the market. In addition, more and more producers have been emboldened to make limited edition, super-cuvées with pricing that has reached a level that was unthinkable just a few years ago. Bottlings that crest $75 are commonplace, and each year more wines join the $100 (and higher!) club. While it’s easy to focus on this not-necessarily welcome development I think it best to consider the myriad wines in the $30-$50 range that easily compete with Pinots at similar and often (much) higher prices from California, not to mention Burgundy. Things are also getting more interesting in the relatively small $30 and under category, where I’m pleased to note that an increasing number of wineries are making Pinots of real complexity and more savory character than one typically encounters at such prices. While the majority of (relatively) inexpensive Pinots from Oregon, and the rest of the world for that matter, are usually fruit-driven, even jammy, more than a few of the entry-level bottlings that I tried this year showed surprising character and even earthiness, in a good way, which I enthusiastically applaud.

I tasted these wines during my trip to Oregon in the early fall and then up until the publication of this article. I regret this article was delayed because of scheduling conflicts on my part and the sheer volume of wines. On a more positive note, I was able to taste quite a few 2017s, which I hope will bring us back up to speed with this endlessly fascinating and increasingly popular region.