Secret to the Perfect Seared Salmon

As a lover of all things meat, and being a huge fan of grilled and pan-seared steaks, there is no other fish that speaks to my soul as well as a seared piece of salmon. It provides a hearty, flavorful, and texturally seductive experience, which bridges the gap between sea and land. However, like most people, seared salmon was one of the most intimidating preparations for me to start making at home. I would go through attempt after attempt trying to understand how to get that perfect sear without overcooking, sticking to the pan, tearing the skin or mutilating the meat itself. I tried every manner of non-stick cookware, which helped with the sticking, yet it still failed to properly sear. I then gave up on the sear for a while and resorted to the broiler, which provided a crispy exterior, yet usually an overcooked interior, and the skin side was never quite right.

In the end, it wasn’t even culinary school that finally opened my eyes, nor was it an executive chef at a restaurant where I worked.

Instead, it was a night shift commis (basically a junior chef in training with no official schooling) who had been tasked with working the grill one evening while I was watching over the kitchen and helping to cater a party we had going on in our penthouse. These were always the most stressful times, working with a skeleton crew and often staffed by the “new guys”, while feeding the late-night crowd of the restaurant and sending tray after tray of hors d’oeuvres up to a party. That’s when an order for our pan-seared salmon with garlic butter and squash noodles came up on a ticket, along with eight other entrees that were all gnocchi, risottos and pasta. This was a nightmare situation in our busy kitchen because that one ticket took up every burner we had, and nearly everything on it was my responsibility. Meanwhile, the commis stood by watching, without anything to do. Then a miracle in disguise took place; our commis offered to handle the salmon…stating, “I’ve seared salmon a hundred times.”

Of course, I was skeptical, but if there was one thing that working in restaurants had taught me, it’s that even the lowest man on the totem pole often has a skill set that can outmatch the rest of us. And so, out of desperation, I set him to the task. To my surprise, he didn’t even need to use one of my burners; instead he removed the grill from its seat over the flames and replaced it with a large cast-iron pan that I had never seen used in that kitchen before. He then gave it a quick seasoning with hot canola oil, wiped it down, and went on to cook one of the most uniform, perfectly seared pieces of salmon that I had ever seen.

When the ticket was done, perfectly timed and all, and the plates were on their way to the table, I quickly humbled myself and asked our commis / grill man, “Can you teach me?”

That was fifteen years ago, and that one night changed everything about how I have prepared this dish ever since. Today, when salmon is on the menu, there are smiles all around.

Now, I’m going to show you just how easy it is to sear salmon. No sticking, no mutilated meat, perfectly cooked, seared and with a crispy skin. 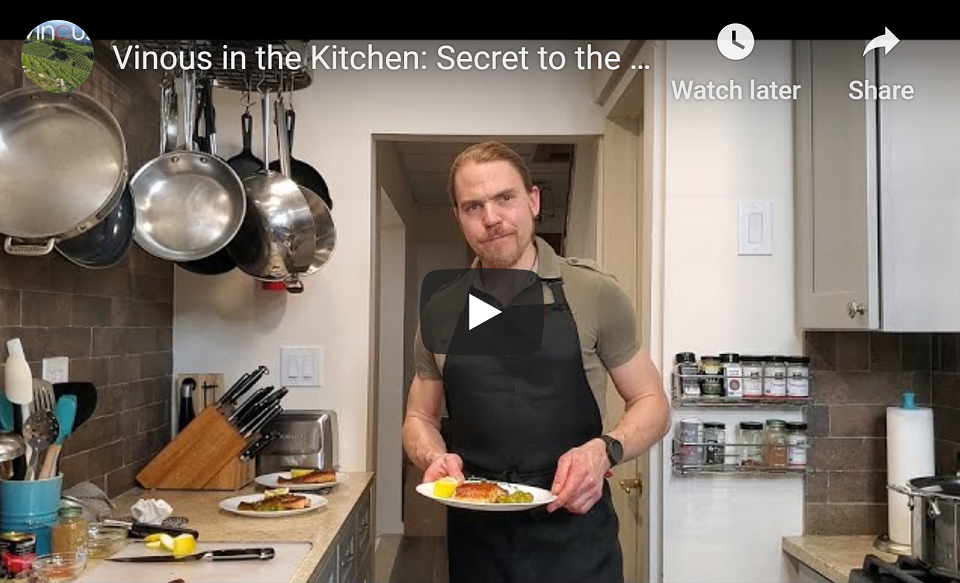 The video tutorial is packed full of hints and tips to cook the perfect seared salmon.

Think of this less as a recipe and more as a process.  Feel free to mix up the seasonings and get creative once you’ve gotten the sear down. 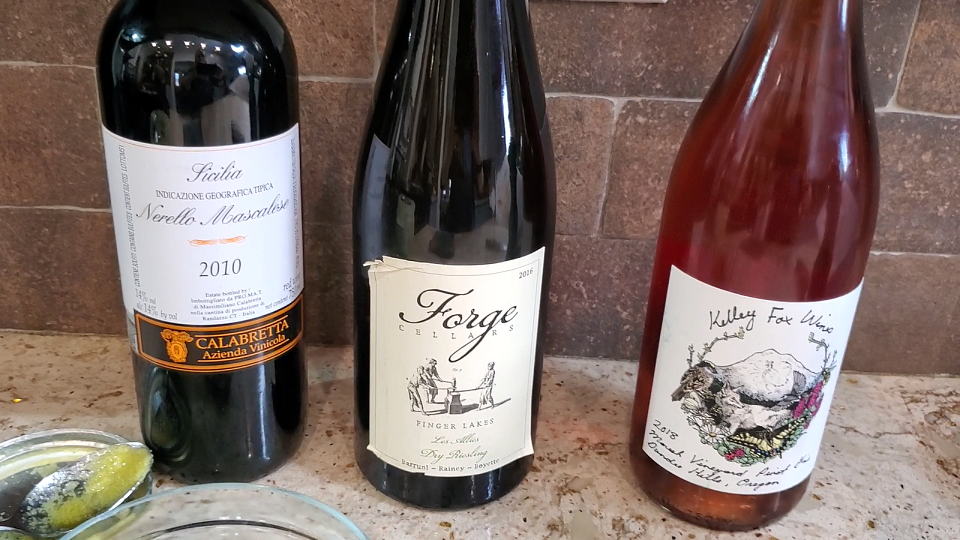 1. Take your salmon out of the refrigerator from 20 minutes to a ½ hour before cooking. 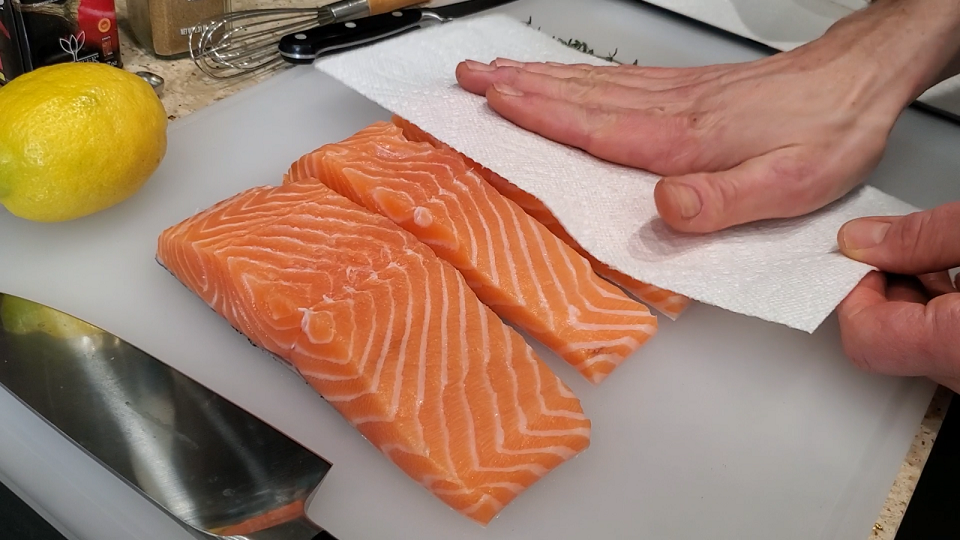 Make sure the salmon is dry. Moisture is the number one factor that will prevent the salmon from searing properly.

3. Pat each piece of salmon dry on both sides with a clean paper towel.

4. Assemble your mixture of cumin and paprika in a small bowl and whisk to consistency. 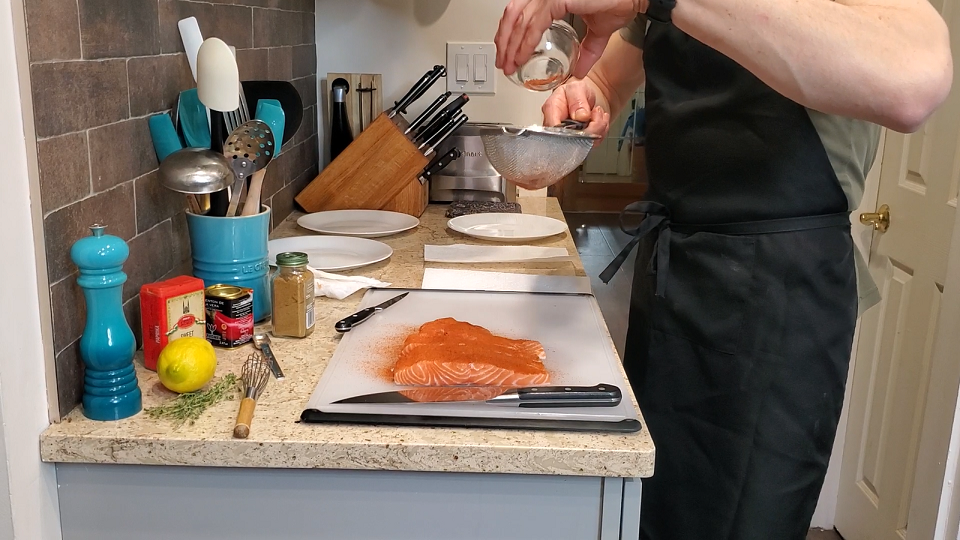 Use a sieve to sprinkle the spice mixture of cumin and smoked paprika over the salmon.

5. Line up the salmon on your cutting board, and using a sieve, sprinkle the seasoning mix over the salmon pieces to form a uniform coating.

6. Bring the salmon close to the pan and add one to two tablespoons of clarified butter or ghee to the cast-iron pan. This may start to smoke quickly.

7. Now season your salmon liberally with salt, and gently place each piece into the pan, skin side up. Be careful not to bunch the pieces together, and try not to move them once placed. 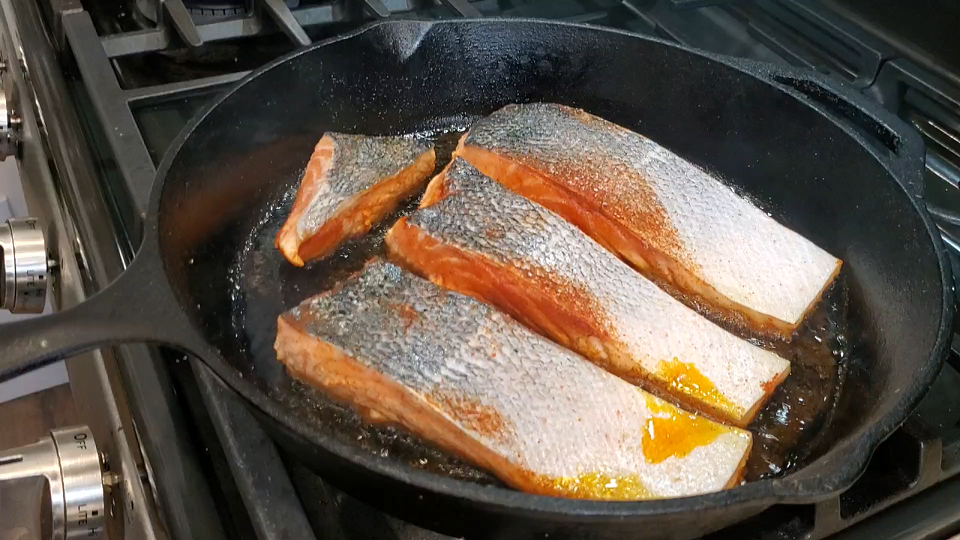 Season the skin liberally with salt before flipping.

8. While the fish cooks (about 2 to 3 minutes), use your time to quarter the lemon, and place one wedge on each plate.

9. Pat the skin side gently with a clean paper towel, season liberally with salt and prepare to flip the salmon. A fish spatula works best due to its shape. When flipping the fish, be very careful not to splatter yourself with the hot butter. Flip each piece individually.

10. Bring the flame to high and allow to cook for one minute before returning it to medium-high. 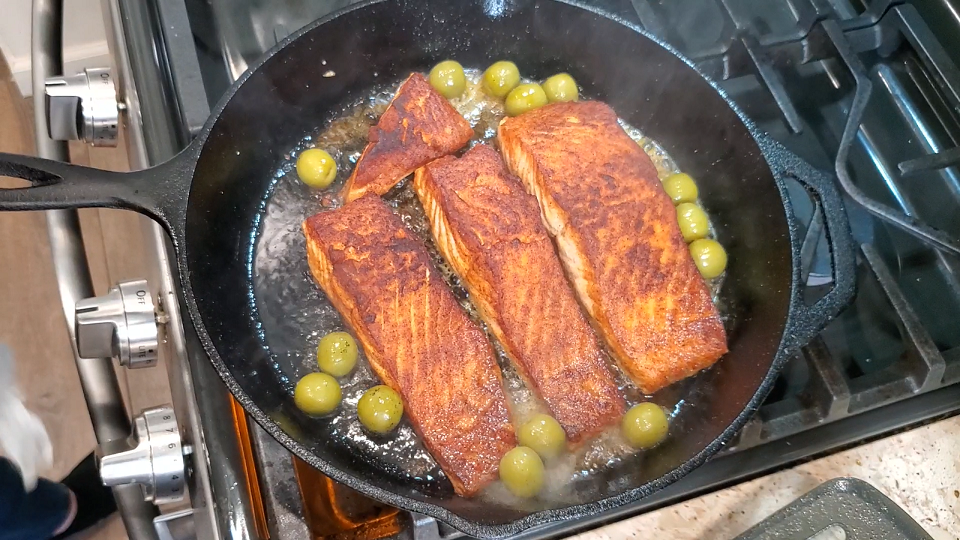 The green Sicilian olives are buttery and sweet on their own and will take on the flavors of the salmon when sautéd, offering a nice contrast when used as a garnish.

11. Now add the green olives and sauté in the butter for another two minutes before removing the pan from the heat.  The cast-iron pan will keep cooking your salmon.

12. Remove the olives and set aside for plating.

13. If you like your salmon medium-rare, then you can remove it from the pan to your plate. If you prefer medium-to-well, place the entire pan in a 350-degree oven for three to five minutes. 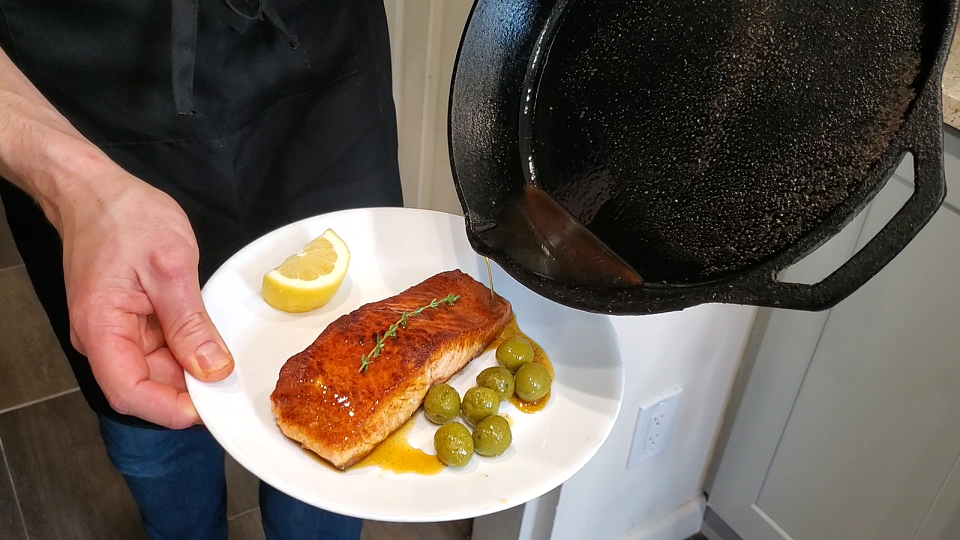 Add olives, lemon and thyme as garnishes and drizzle the remaining butter over the salmon.


14. To plate, place a piece of seared salmon in the middle of your plate with the lemon wedge next to it.  Portion out the olives onto each plate on the opposite side of the lemon. Place one to two sprigs of thyme on each piece of salmon. Lastly, spoon the hot butter mixture from your pan over each piece of salmon (and prepare to be met by one of the most amazing smells on earth as the butter gently cooks the thyme leaves). 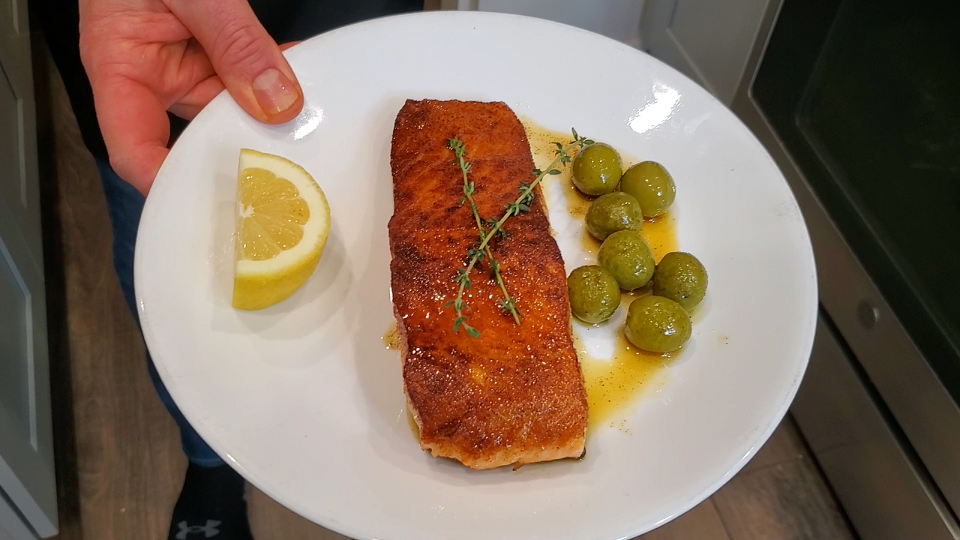 Your perfectly seared salmon is ready to serve.