Imagine if you will; trust me, it won’t be hard. You’re a foodie and lover of wine who has explored the cuisine of all of your favorite wine-producing regions. Why? Well, that’s simple; as they say, “what grows with it goes with it.” However, your experience has been at the top fine-dining establishments around the world, your own exploration from cookbooks, or better yet, an authentic local restaurant close to the vineyards. Now you’re with me, right, and you think you know just how amazing it is to experience the perfect pairing of regional wine and cuisine? But you’re wrong.

Instead, imagine now that you’re a fledgling wine writer, and at one time, a professional chef, touring the cellars of multiple producers in the Monferrato region of Piedmont. Your palate is stained with Barbera, after days of tasting, tingling from zesty acids, while dry from an intensity of primary fruit. However, you don’t mind because the thrill of the surroundings and touring of old traditional cellars is what you love. Then, after tasting from countless large botti, the producer who is hosting you asks if you would like some lunch. Upon agreeing to what you believe will be a plate of cheese and salumi, a door is opened in the middle of their cellar, and as you pass through, you find yourself surrounded by four generations of their family in the middle of a cozy, country-style dining room.

The producer's mother appears from the kitchen, carrying plate after plate of regional cuisine. These are the same dishes that you have been tasting each day at local restaurants, yet prepared in a tiny kitchen, by the matriarch of this proud family. There are no fancy garnishes or elaborate variances on traditional classics here. Instead, these are the same preparations that have been passed down for generations. The one that stands out the most, due to your past experiences and attempts to prepare the same dish yourself, is the Brasato al Barolo. It’s like nothing you’ve ever experienced before, and paired with a simple yet mature Barbera, each piece of delicate meat melts in your mouth and perfectly balances the acids and intense savory fruit of the wine. This dish is speaking to your soul, and you know that you could never recreate it. All you can do is pay respect to the fact that this family upholds the true traditions of regional cuisine and wine.

I ended the trip two weeks later, and the number one thing that stood out in my mind was an unexpected lunch in a cozy family dining room.

I can’t say that my Brasato al Barolo is anywhere near as good as the one I enjoyed that afternoon, and what I wouldn’t give to cook alongside that woman and learn her method. However, I will do my best to teach you about a dish that I love, which satisfies on so many levels. Taking a simple chuck roast and turning it into the richest, most flavorful, fall-off-the-fork delicacy you’ve ever experienced. Oh, but don’t forget the sauce, based off of the same wine that was used in the braise. So, grab a bottle of Barolo and get ready because once you’ve made your own Brasato al Barolo, there will be no going back

Please note, that this preparation differs slightly from the one in the video since it is using a 5-6-pound chuck roast. 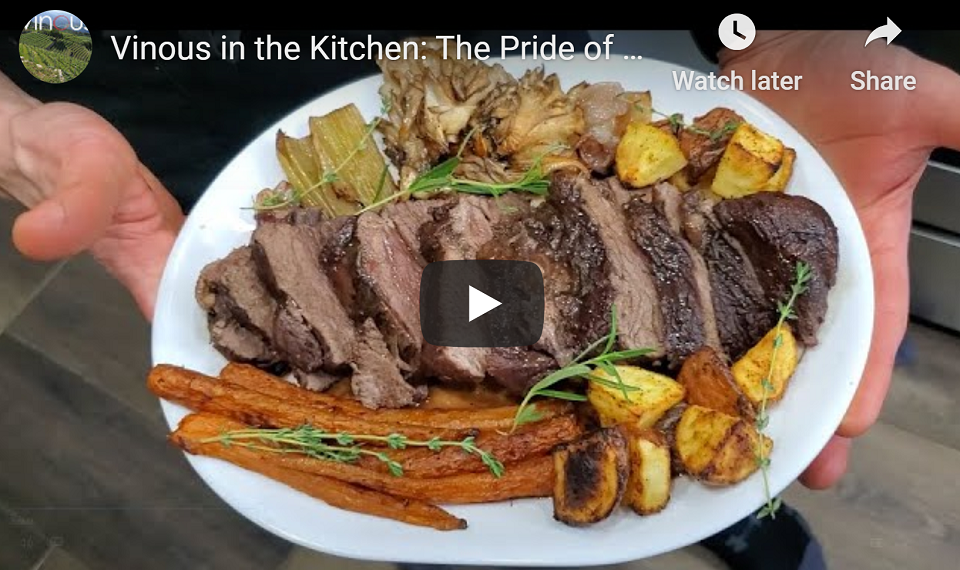 The video tutorial is packed full of hints and tips to cook the perfect Brasato al Barolo.

1 bottle of Nebbiolo wine (look for something made in a fresh style. No new oak.)

2 cups of beef or vegetable stock

3 stalks of celery (halved and cut into slices)

Salt and pepper as needed

Share your own wine pairings on Delectable and check out what others have paired with Brasato al Barolo. 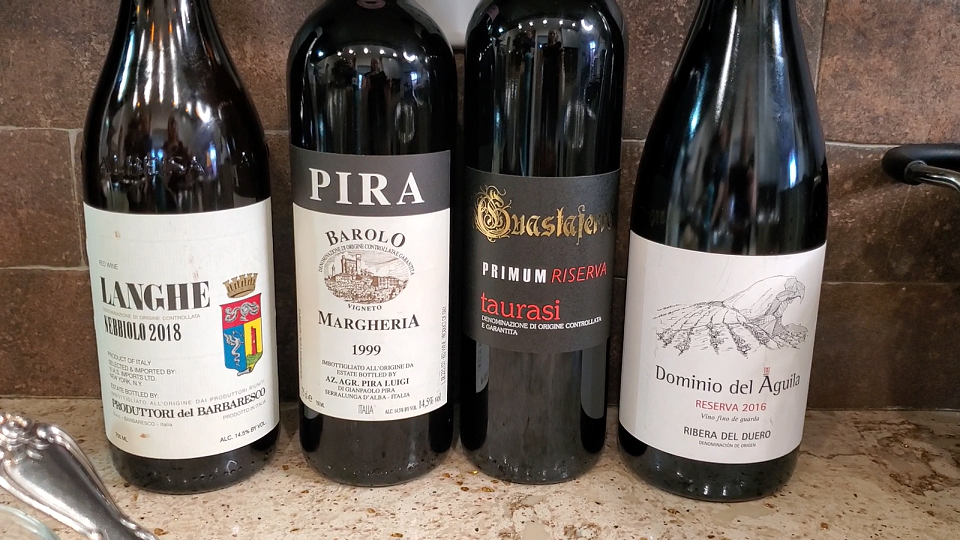 Note: I will often refer to the chuck roast as the Brasato throughout the recipe. Also, when preparing your vegetables, remember that you will be serving them later, so be sure to make clean, measured cuts. 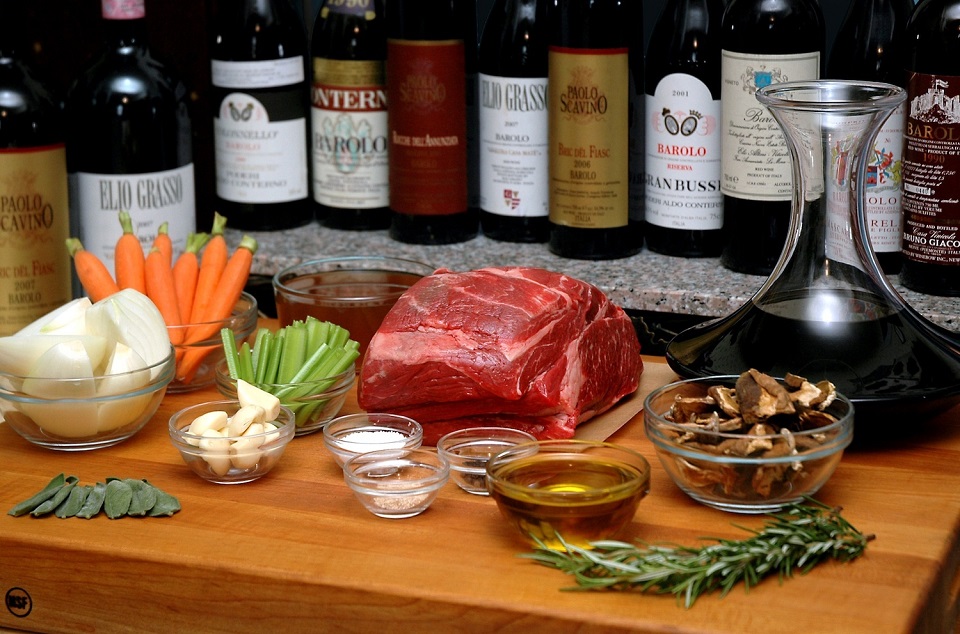 Brasto al Barolo is a low and slow, moist-heat preparation using a simple, yet aromatic and flavorful set of vegetables.

1. Remove the chuck roast from your refrigerator up to an hour prior to starting so that it can come up to room temperature.

2. Preheat your oven to 250 degrees Fahrenheit.

3. Place a large gauge stainless pot, stovetop-safe earthenware vessel, or Dutch oven over a burner set to medium-high. Once ready, drizzle olive oil over the Brasato, and season it liberally with salt on all sides. Add the Brasato to the pot, and sear for about two minutes on each side.

4. Once seared, move the Brasato to a platter off the stove. 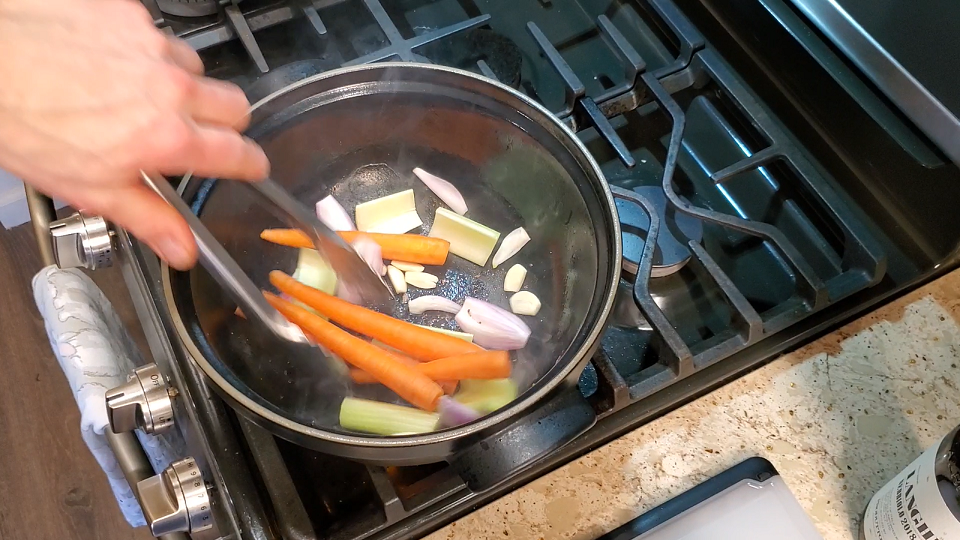 Once the seared Brasato is removed, immediately add the vegetables to the pan and stir to mix them with the fond left behind by the Brasato.

5. Next, add the carrots, celery, onions and garlic to the pan with a pinch of salt. Stir to loosen the cooked-on fond from the seared Brasato.

6. Once the vegetables have begun to take on color, lower your flame, and begin to pour the wine into the pan and stir (you are deglazing the pan). Follow this with about half of your stock. 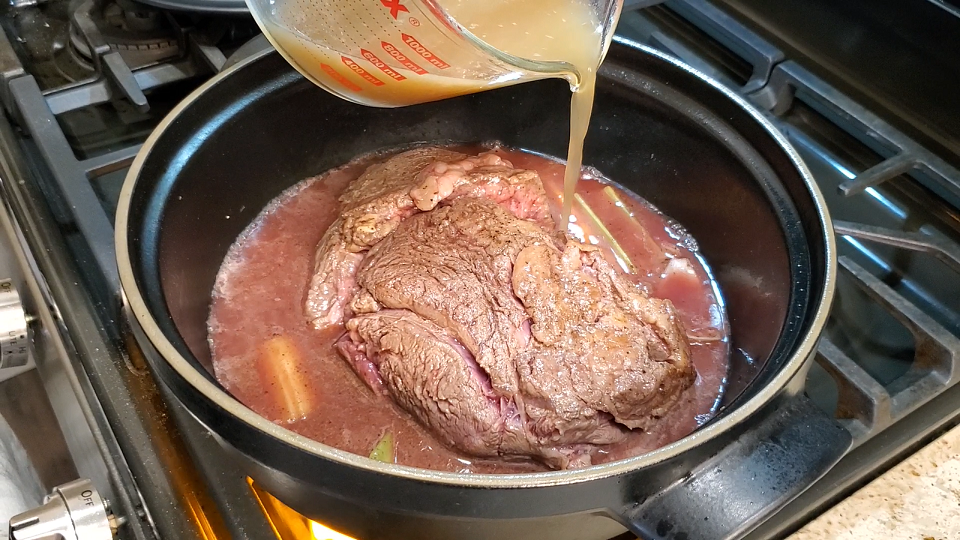 Make sure the braising liquid comes halfway up along the sides of the Brasato.

7. Return the Brasato to the pan. If the braising liquid does not come halfway up along the sides of the Brasato, then add more stock.

8. Turn your flame back up to medium, and add the sage, thyme and rosemary to the top of the Brasato. If using dried porcini mushrooms, you can add them to the braising liquid now. 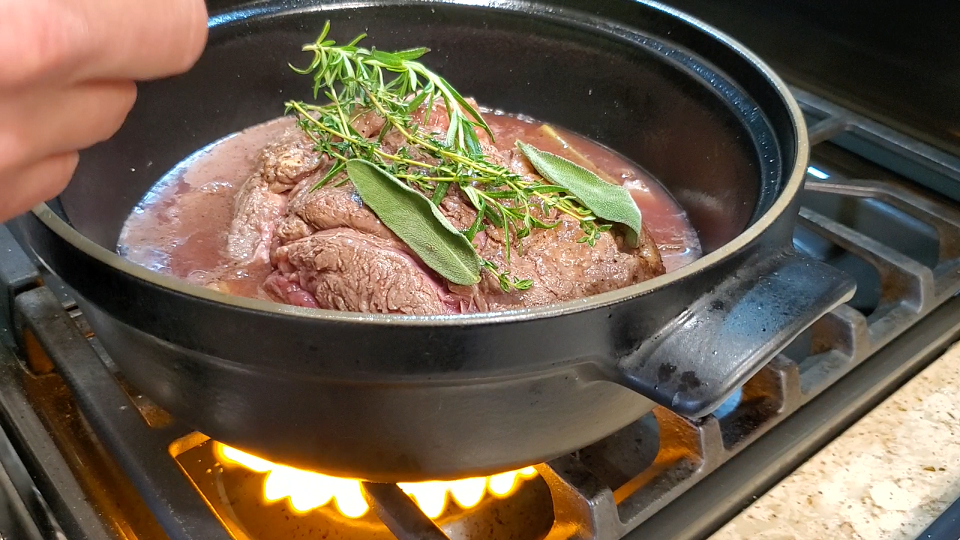 Drape the herbs over the top of the Brasato. As the Brasato cooks, all the flavors and aromas of the herbs will infuse into the meat.

9. Allow this mixture to come to a simmer, and then cover with a lid or a piece of aluminum foil.

10. Place the pot into the center of your oven.

11. The meat should braise for four hours like this. However, it is important to turn it over halfway through to allow a steady combination of moist and dry heat to permeate it. 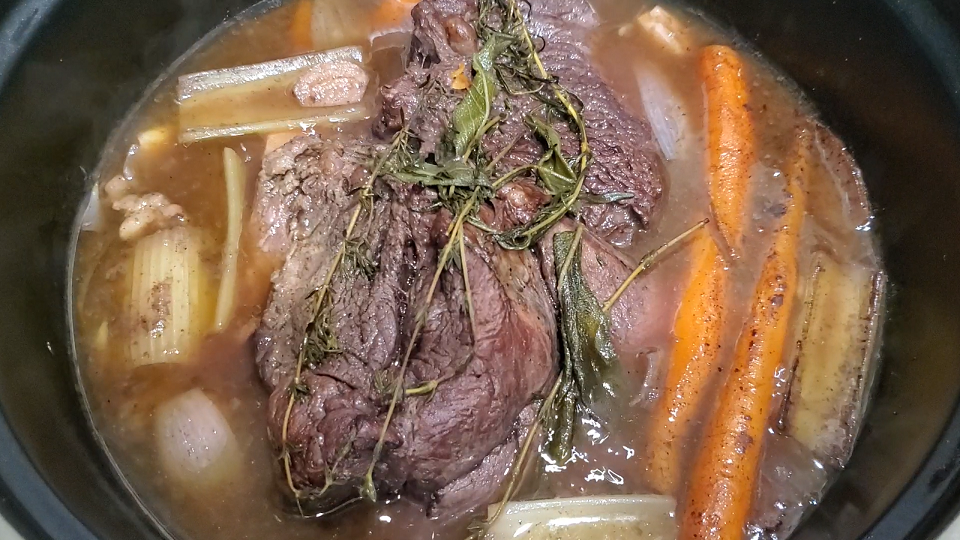 After four hours, remove the pot from the oven and allow the meat and vegetables to rest for 15-20 minutes.

12. Once completed, remove the pot from your oven, and allow the contents to rest for 15-20 minutes.

13. Now, remove the Brasato from the pot and cover with foil. 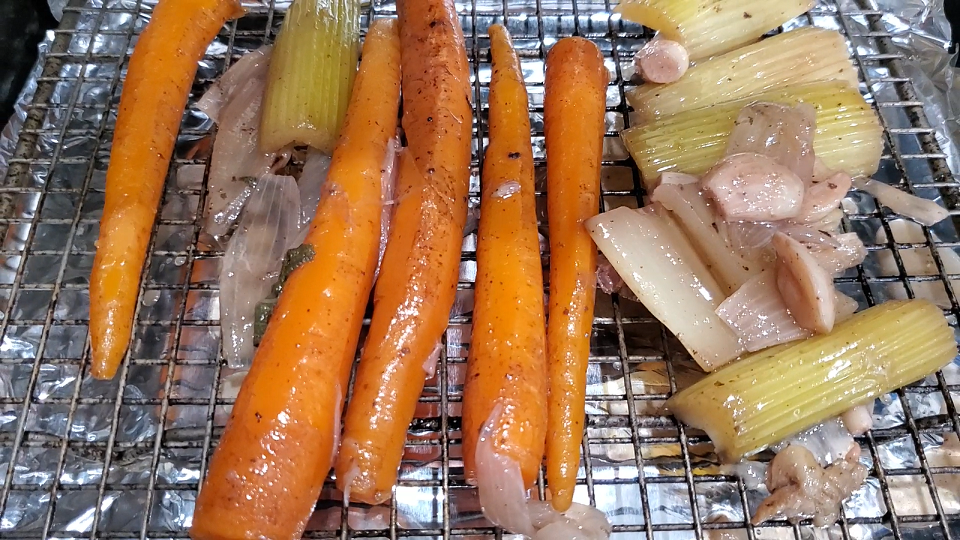 Roast the vegetables in the oven to intensify their flavors.

14. Strain the cooking liquid from the vegetables, being careful not to damage them. The vegetables can rest with the Brasato or be placed back into the oven to stay warm and concentrate flavors.

15. Skim any excess fat from the top of the cooking liquid, then pour it into a wide pan and place over medium heat. The idea is to reduce the cooking liquid into a saucy consistency. Your own preferences are important here, I like to reduce the sauce to a thick consistency, but you may prefer it a little looser. Once done, remove from the heat, taste for seasoning, and add one tablespoon of whole butter (this adds a beautiful sheen and richness to the sauce). Stir to incorporate fully. 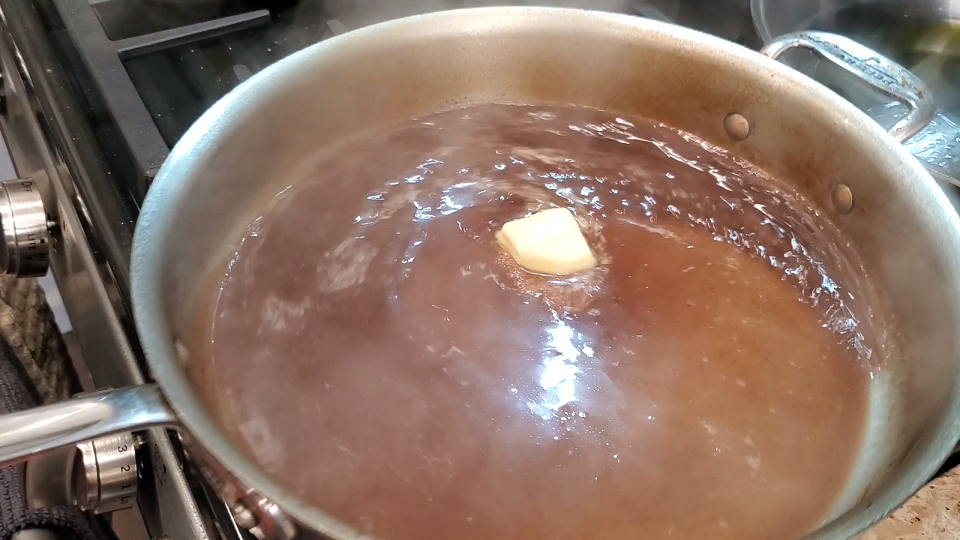 Taste the sauce and judge based on its level of acidity and seasoning whether it needs added richness, which can be achieved by using butter.

16. If you are serving it immediately, slice the Brasato and set it on a platter, dressed with the vegetables. Then drizzle a healthy serving of the reduced sauce over it, reserving some to keep on the side at the table. 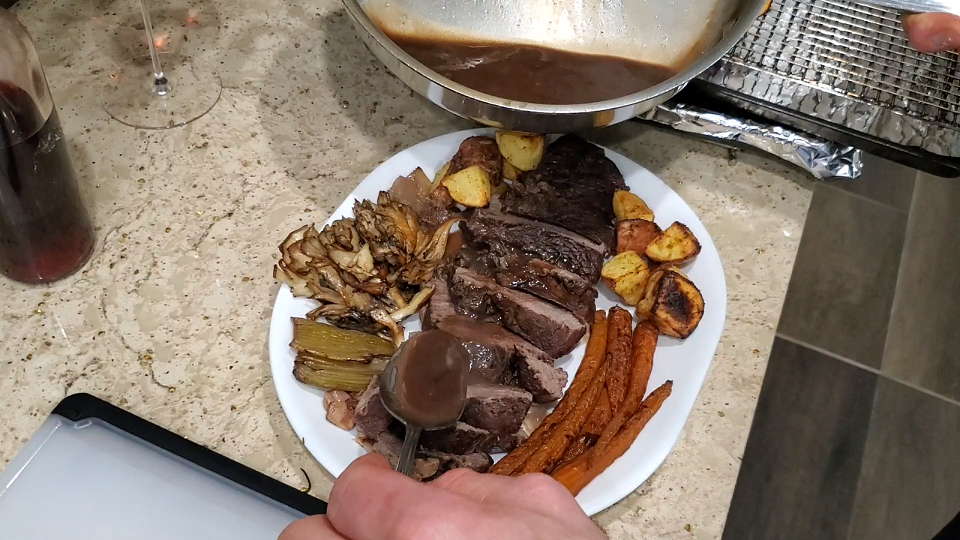 Drizzle the sauce over the Brasato.

17. Garnish with rosemary and thyme and serve. 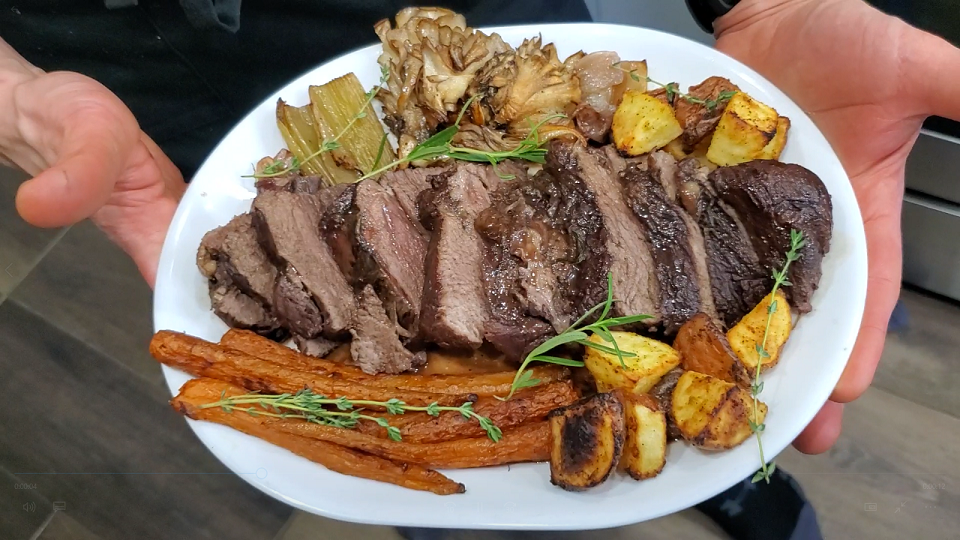 Garnish with rosemary and thyme.

Alternatively, you can slice the roast, submerge it in the sauce, and refrigerate until ready. Warmed over low flame for five to ten minutes, or in an oven until heated through, and you have the ultimate leftovers.