These last few months have really put our priorities into perspective. Now when it comes time to go to a supermarket, we contemplate the items that we actually need, those that are worth the hour line wait just to enter the store. We used to care about brands that we preferred, but now we have to buy what’s in front of us, or we risk being without the essentials.

Then there’s dining, and how much we all miss taking a break from the norm and the kitchen to treat ourselves to a meal that we didn’t have to make ourselves, and dishes that we wouldn’t have to wash. For me, I miss restaurants more than anything, and it recently got me thinking about the things I loved most when I went out to eat. The funny thing is that it wasn’t a dish at one of New York City’s amazing fine dining establishments or a centuries-old steakhouse; instead it was those rare times that I’d end up at a pub, treating myself to a plate of hot wings. Those are all great memories. I’m sure many of you agree, and like me, look forward to those days come back.

However, until then, why not make them ourselves?

I must admit that the first time I made hot wings, I was quite intimidated. First it was the fact that traditional hot wings are deep fried; something I never do in my own home for both health and safety reasons. Taking that out of the equation, I just couldn’t bend my brain around achieving a consistent crispiness without the blast of intense heat from being submerged in oil. Then there are the sauces: buffalo, a marinade and blue cheese dressing. Let’s face it, you can buy blue cheese dressing at nearly any supermarket, but good luck finding one that can compete with your favorite bar or pub's house blue cheese, and how do they get those wings so spicy? However, I was determined, because with the world outside feeling upside down, I needed the comfort of one of my favorite foods. And so, I decided to make it all from scratch and figure out how to achieve crispy wings in the oven.

For those of you who prefer BBQ-style wings, I’ve got you covered too. With just a simple modification, you can easily marinade and cook up BBQ wings right alongside your hot wings. Also, if you don’t like blue cheese, then simply skip that preparation and substitute with your favorite dipping sauce (ranch dressing is usually a great alternative). If you do like blue cheese, try to make the dressing the day before, which allows the flavors to combine and blossom. 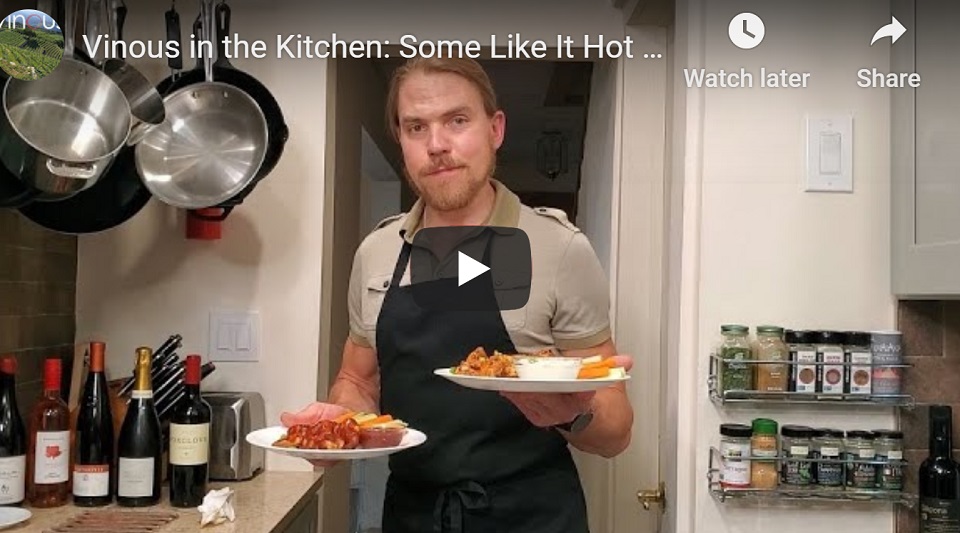 The video tutorial is packed full of hints and tips to cook the perfect hot wings.

3-4 stalks of celery, peeled and cut into 3-inch-long pieces

The greens of 2 scallions, sliced for garnish (think of a chiffonade cut)

Hot Wing Marinade and Sauce (To be made at least four hours prior to cooking your wings, and allowed to cool before using as a marinade):

The juice of one lemon or lime

½ cup of your favorite hot sauce (I love Cholula)

BBQ Wing Marinade (simply whisk all ingredients together in a small bowl):

Blue Cheese Dressing (You can easily double this recipe because it will stay in your refrigerator for up to two weeks in a sealed container):

Salt and pepper to taste 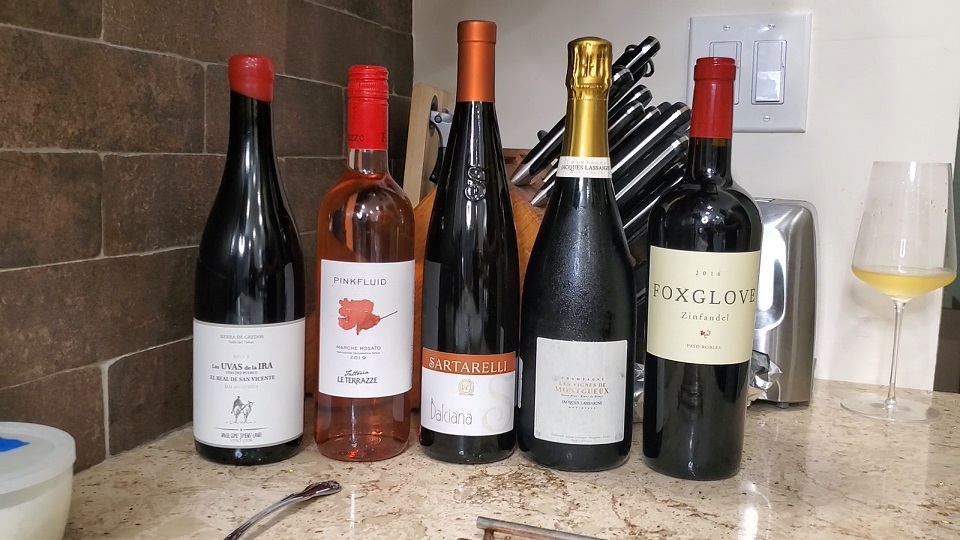 Share your own wine pairings on Delectable and check out what others have paired with wings.

2. Add the ginger and scallions to the pan, and sauté over a medium flame for 1-2 minutes. 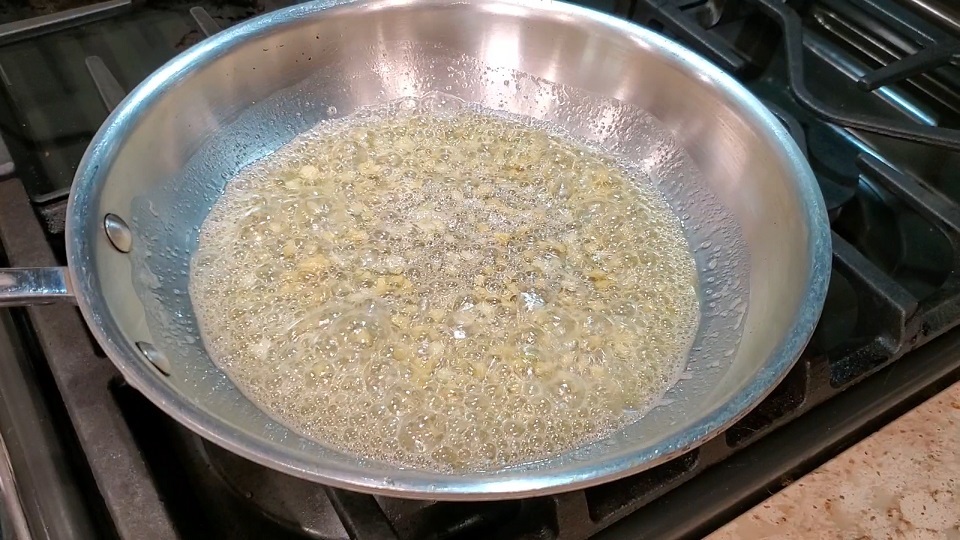 Sauté ginger and scallions over a medium flame.

3. Add the hot sauce to the mix and bring the heat up to medium-high.

4. Add the last ⅔ of sweet butter, garlic and pepper and stir.

6. Bring this mixture to a boil, and then remove from the flame. The idea is not to reduce this sauce, simply to bring all of the components together. 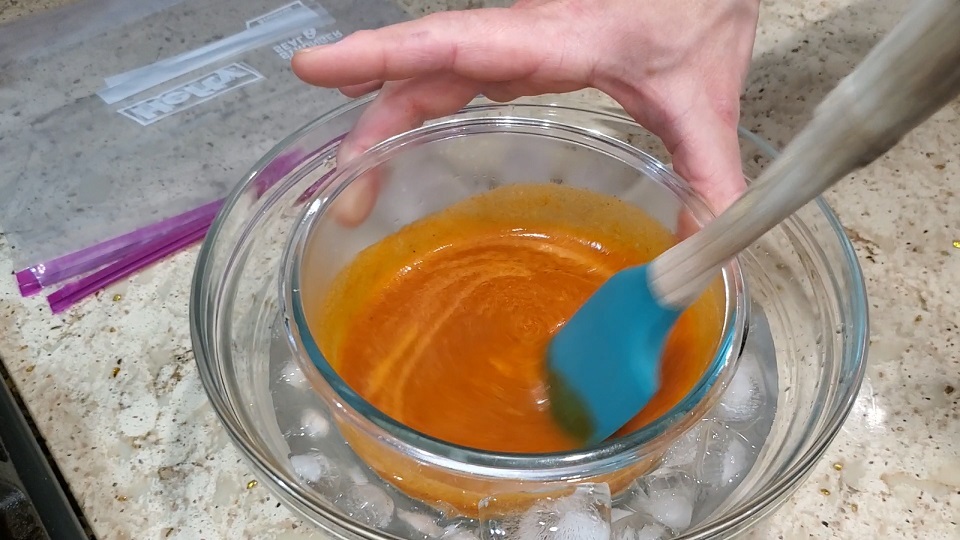 Remove sauce from flame and cool completely in an ice bath.

7. Allow this mixture to cool completely.

1. Add the sour cream, mayonnaise and crumbled blue cheese to a bowl, and stir thoroughly.

2. Add the minced onion, garlic granules, apple cider vinegar and buttermilk to the same bowl, and continue to stir until the mixture has an even and creamy consistency.

3. Add the white sugar and stir until dissolved. 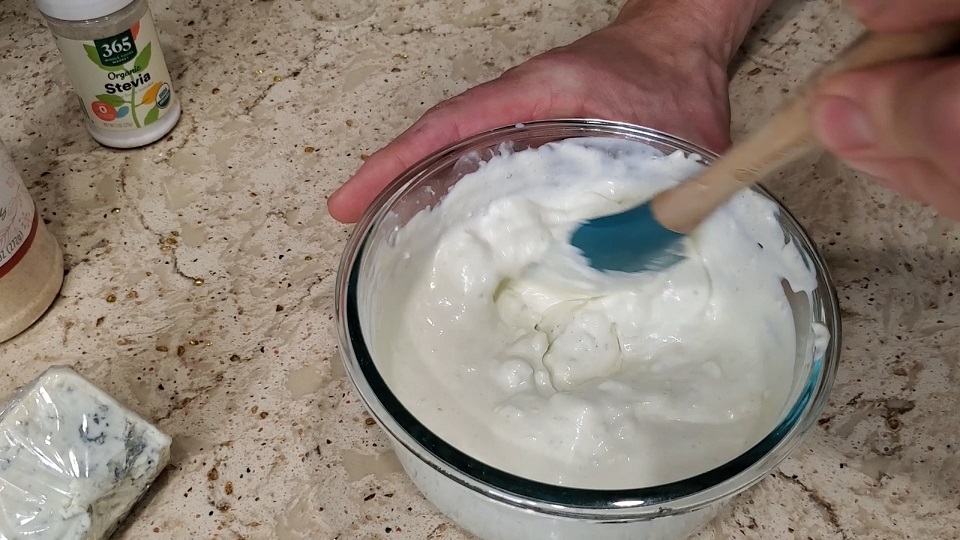 Stir until the mixture has an even and creamy consistency.

4. Season with salt and pepper to taste.

5. Place your blue cheese dressing into a sealed container in your refrigerator.

Making Your Wings (Both hot wings and BBQ wings):

1. Plan to marinate the wings at least four hours prior to cooking.

3. Place these into the refrigerator for at least three hours.

4. Take the chicken wings out one hour prior to cooking to come up to room temperature. 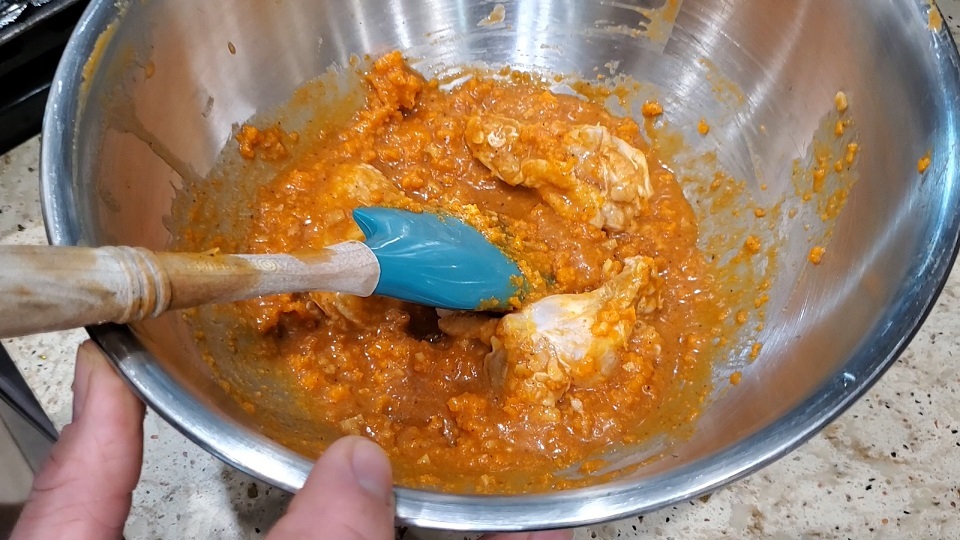 Remove the hot wings from the Ziplock bag and place them with the remaining marinade into a bowl.

5. Place the hot wings into a bowl to allow the marinade to drip off on the wings and into the bowl. Don’t be concerned if the butter solidified while in the refrigerator because we will be warming this mixture a few steps later. (The marinade for the BBQ wings can be discarded.)

6. Prepare a sheet pan lined with aluminum foil and rack that will keep the wings up off of the foil and allow air to flow around them.

7. As you place the wings onto the sheet pan, make sure to scrape off any remaining marinade into the bowl. You can use your hands or a spatula.

8. Make sure the wings aren’t touching each other. Again, the idea is to allow air flow.

9. Turn your broiler on high and set the oven rack about 8-10 inches below the flame.

10. Season the wings with salt, place them into the oven and set your timer for ten minutes.

11. At the ten-minute mark, check the wings; they should be crisp and browning. If you feel they haven’t browned enough, place them back in for another two minutes. 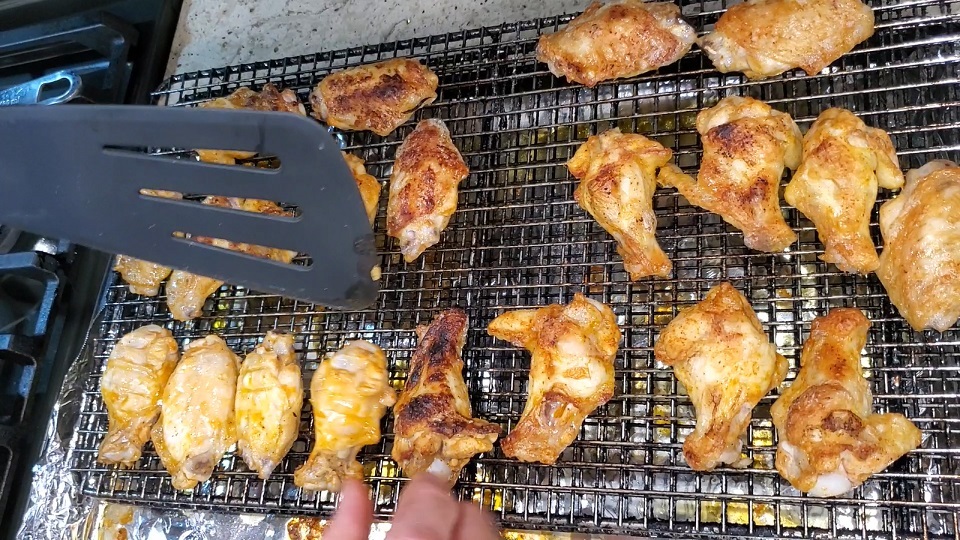 Once the wings are crispy, flip each wing.

12. Once crisp, pull the sheet pan from your oven and flip each of the wings.

13. Season them once again with some salt, place them back under the broiler and set your timer again for ten minutes.

14. Pour your reserved marinade into a small pot and bring the flame up to medium.

15. Stir regularly and bring to a boil, but do not reduce. If you feel that it reduced too much (such as starting to look oily), add some more of your hot sauce to the mix.

16. For the BBQ wings, add a ½ cup of your favorite BBQ sauce to a small pot, and warm it over a low flame.

17. Once the timer goes off, check on the wings. If they are crispy and brown, then pull the pan out of the oven. If not, then you can give them another two minutes under the broiler. 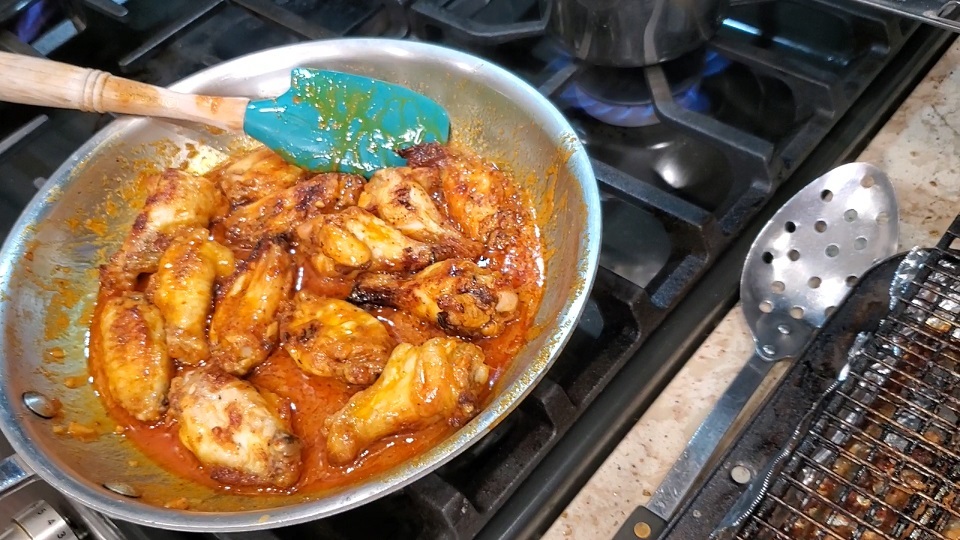 Remove the hot wings from the oven and place them in a pan with the boiled marinade.

18. Once they are done, move the hot wings to the pan with the marinade you boiled, and give them a toss.

19. As for the BBQ wings, brush them with a layer of the warmed BBQ sauce, and place them back under the broiler for two minutes. 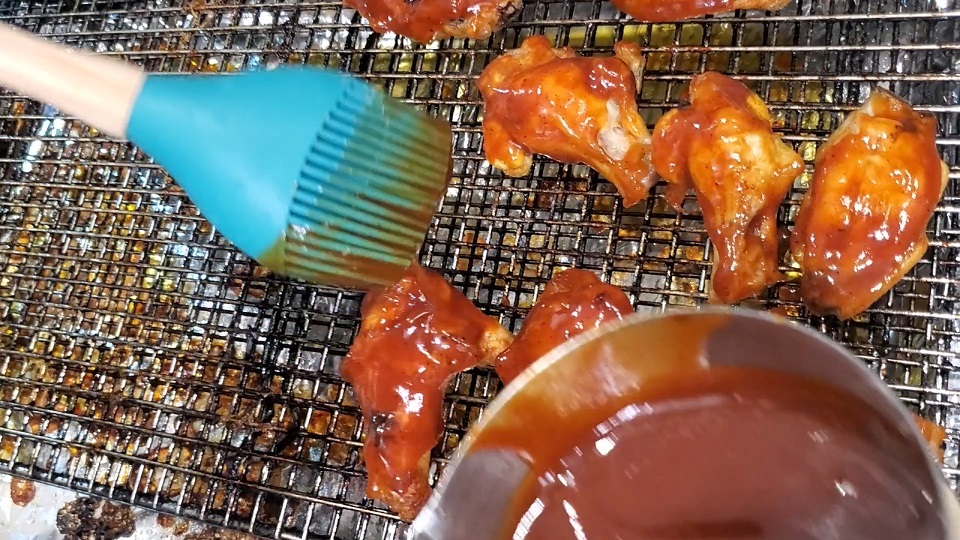 Brush the BBQ wings with a layer of the warmed BBQ sauce.

20. Plate the hot wings by placing them on the plate with a mix of celery and carrots, along with a ramekin of blue cheese or ranch dressing. Pour some more of the marinade over them (the amount you use is up to you), and then garnish with slices of green scallion.

21. Plate the BBQ wings by placing them on the plate with a ramekin of the warmed BBQ sauce, along with a mixture of carrots and celery, and then garnish the plate with slices of green scallion. 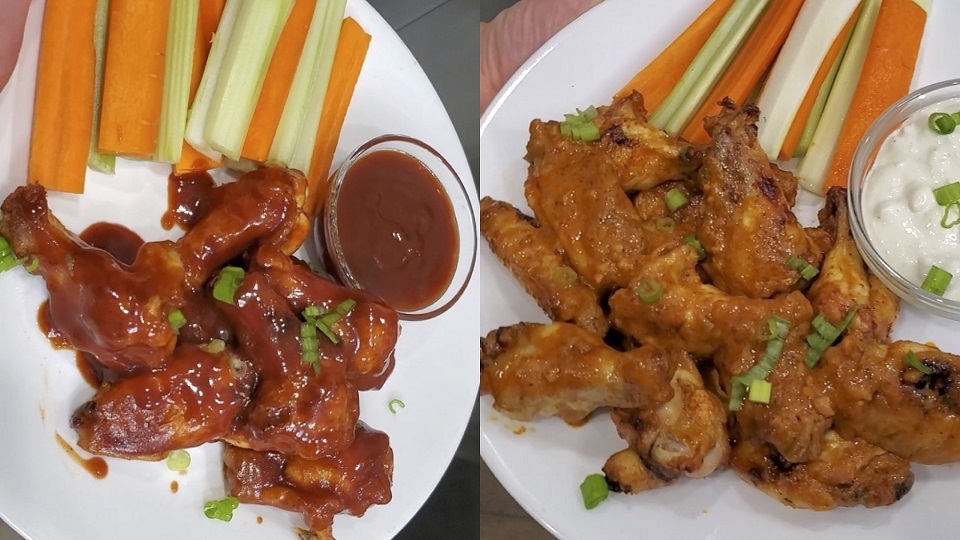 Plate your wings, garnish with green scallions and serve.

22. Serve next to a big stack of napkins; this is some serious finger food!