The appreciation of Cabernet Franc from the Loire Valley seems to split along generational lines. Boomers and older Gen X drinkers have often been skeptical of reds from Chinon, Bourgueil and Saumur-Champigny, where the grape is predominant. That’s because Cabernet Franc in the Loire can produce a rather savory wine; one that runs counter to the sort of big, ripe, fruity, hedonistic bottles older consumers have preferred over the last several decades.

Thankfully, things are changing. First of all, a taste for more savory wines is spreading among younger drinkers, who also prefer reds with higher acidity, lower alcohol, more earthiness and less oak. Loire Cabernet Franc ticks all those boxes. Not surprisingly, younger wine professionals have strongly embraced the wines. Consumers and professionals alike are looking for drinkable wines that pair better with the changing ways many of us now eat - less meat, more vegetables and less focus on cuisines of old Europe. Of course, in France, Loire reds have always been the classic, everyday bistro wines. 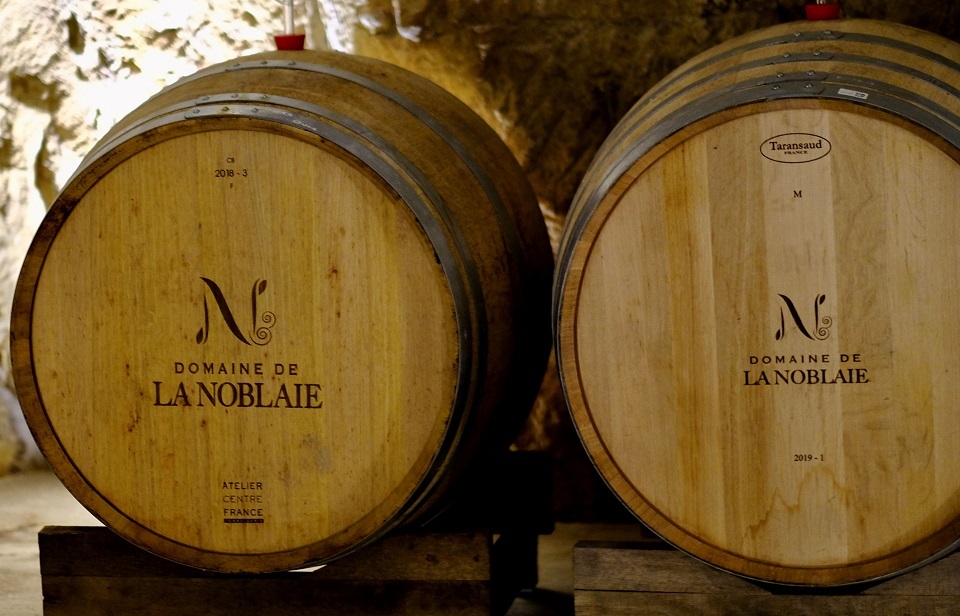 Casks in the cellar at Domaine de le Noblaie in Chinon

The Loire wine scene is full of youthful energy. “Loire is very exciting,” said Émeline Calvez of Domaine Bobinet, a favorite of natural wine lovers. “You can find a lot of interesting young people who are reinventing things.” It’s no surprise that the region has also become an epicenter of the organic, biodynamic and natural winemaking that appeals to a younger generation. In Saumur-Champigny, about one-third of the producers are now certified organic. Even a large producer like Langlois-Chateau in Saumur (part of the Bollinger group) will be certified organic for the 2020 harvest.

Loire reds don’t loudly announce themselves or smack you over the head. Again, a certain fresh, savory element is part of the appeal. Yes, that means Cabernet Franc here can evoke green or vegetal notes, such as fresh herb, tobacco leaf, jalapeño and – when it’s bad – bell pepper. But when it’s good, there is also plenty of red fruit and often an attractive underlying meatiness. Frequently the fruit veers in the direction of tomato or olive. Great Loire reds have thrilling acidity, lively tannins and unique dark minerality, and often notes of black pepper, graphite, pencil shavings and iron. 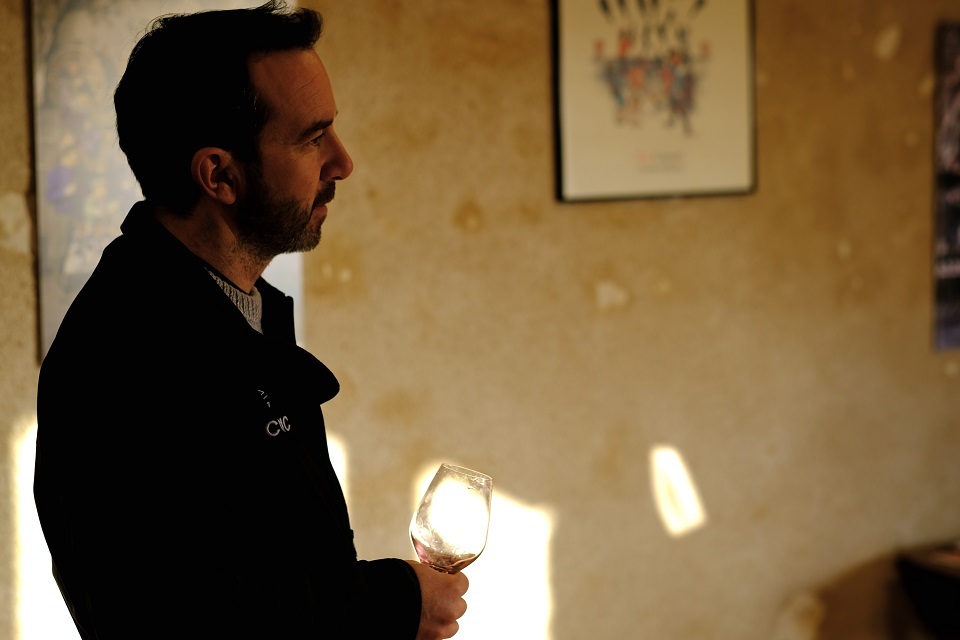 Tasting with Matthieu Bernard at Bernard Baudry in Chinon

Over the past decade, quality in the region has taken a huge leap forward. “Cabernet Franc didn’t have a good image in the past,” said Matthieu Baudry of Domaine Bernard Baudry in Chinon. “Because there was a time when the yields were too high. But today, 90% of the growers do much better yield control, and the wines are much more elegant.”

It’s a tricky balance, according to Benoit Amirault of Yannik Amirault in Bourgueil. “The main challenge for Cabernet Franc is the ripeness,” Amirault said. “If it’s not ripe, you have a green character, and if it’s too ripe, the fermentation is difficult.”

Above all, great Cabernet Franc always displays a certain freshness and vibrancy. “Something quite alive and elegant with a lot of intensity,” said Sylvain Grosbois of Domaine Grosbois. “Sometimes you can have a bit of a vegetal side, but if you work in the vineyard you can get away from that veggie side. But Cabernet Franc has to be vibrant, fresh and elegant.” 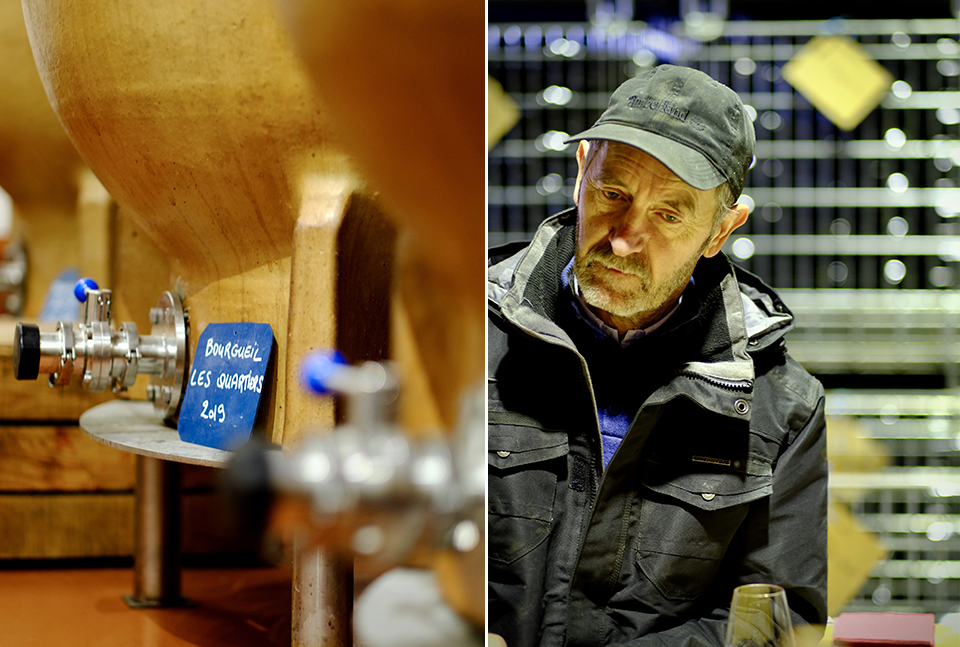 I spent several weeks in the Loire in January 2020 and tasted hundreds of wines from dozens of producers. The first part of my coverage looks at Cabernet Franc, with a focus mostly on Chinon, Bourgueil and Saumur-Champigny, as well as others from Anjou and Touraine.

I want to be as clear as possible: These are exciting wines from a dynamic wine region. If you’ve not tasted Loire for a while, you need to check out what’s going on. The value in these reds is astounding, with highly rated bottles priced under $25 and many of the top-scoring wines under $40. There has never been more good to excellent Loire red in the market. 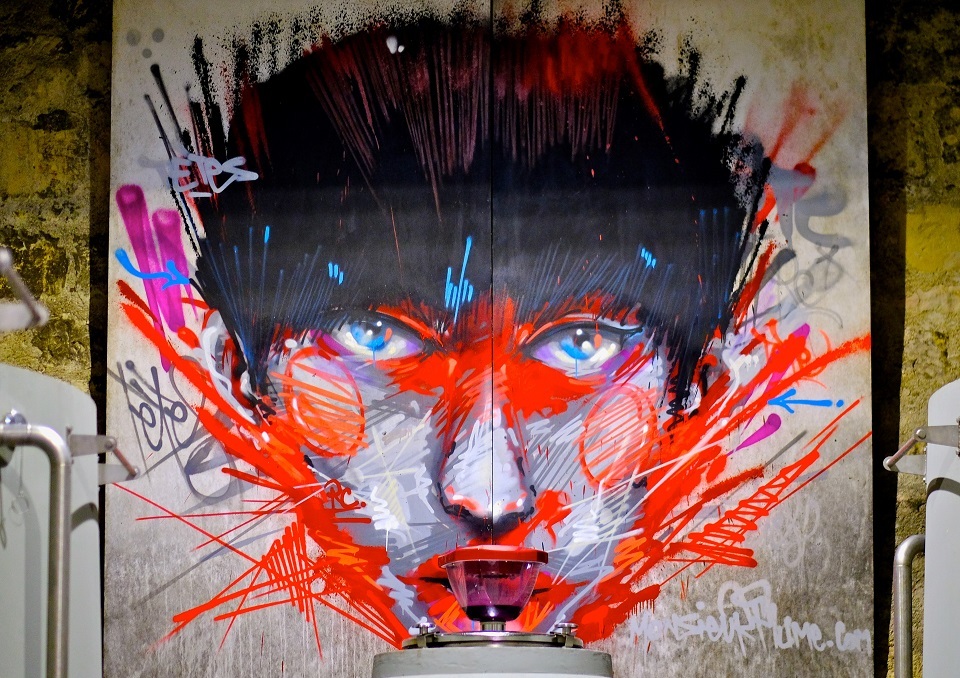 Art on the cellar walls of Domaine Grosbois in Chinon

Part of my bullish confidence in the Loire is based on the series of good vintages that closed out the last decade. After mostly mediocre harvests from 2010 to 2014, the vintages from 2015 to 2018 are strong, and 2018 is considered exceptional. “2018 was almost like tropical weather,” said Jacques-Antoine Toublanc, winemaker at Clos Rougeard. I reviewed mostly 2017s and 2018s for this report, though I also tasted a fair number of 2015s and 2016s to round out my coverage. I found a lot to like in the 2016s.

Warmer weather in this era of climate change has altered the playing field in the Loire. Growers once struggled for ripeness, but cool, rainy seasons have become less frequent. Now, harvest happens much earlier and there’s actually fear of too much ripeness and concern about the wines becoming too big. The sweet spot for Cabernet Franc here is 12.5% to 13.5%. “Over 14%, Cabernet Franc loses all of its freshness and typicity,” said Germain of Roches Neuves. “After 14%, you lose the terroir.”

Along with warmer vintages have come more extreme weather events. Warmer winters cause bud-break to happen earlier, meaning that vines are susceptible to devastating spring frosts, like those of 2016, 2017 and 2019, when 50-80% of the crop was lost in certain areas. As an illustration of the frosts’ effects, Germain told me he’d produced 80,000 bottles in 2018, but just over 20,000 in 2017 and 2019. 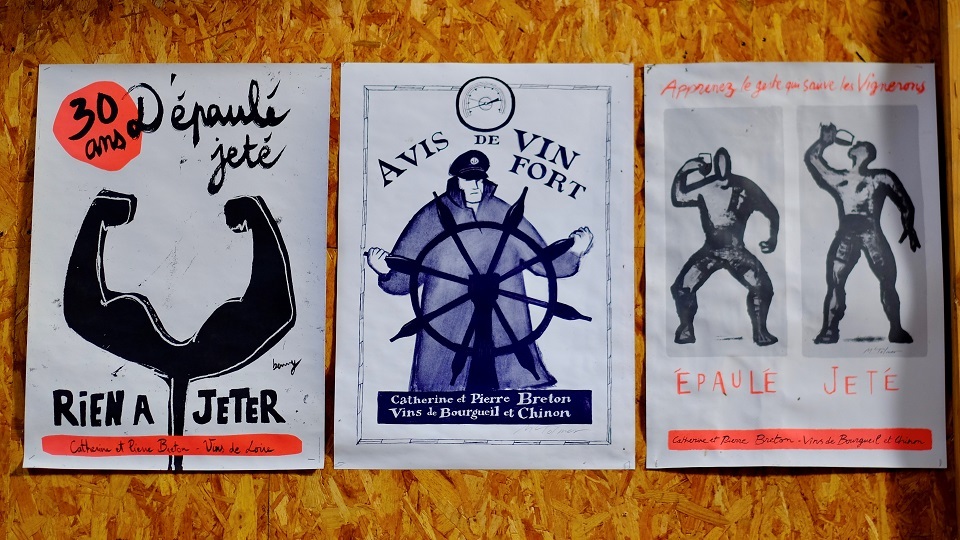 The largest and best-known appellation is Chinon, with 2,400 hectares and more than 200 producers over 18 villages between the Vienne and Loire rivers. Chinon is known for its hodgepodge of soils, from clay and limestone, with some tuffeau and silex on the slopes, to gravelly and alluvial soils closer to the river. These lower-lying vineyards in the valley, many of which are machine-harvested, are responsible for much of the cheaper, light-and-easy wine that gives Cabernet Franc a bad name.

“As soon as you plant Cabernet Franc on the slopes,” said Baudry, “it takes much more minerality from the limestone, is much more full-bodied, and it can age five, ten, fifteen, even 20 years.”

The finest Chinon offers some of the best-value reds in the world. Besides Domaine Bernard Baudry, the most important Chinon estates continue to be exceptional producers such as Olga Raffault, Philippe Alliet, Charles Jouget, Domaine de la Noblaie, Domaine Grosbois and Château de Coulaine.

Adjoining Chinon to the north are Bourgueil, with 1,400 hectares, and Saint-Nicolas-de-Bourgueil, with 1,100 hectares. Bourgueil, scattered among seven villages, has the steeper slopes and more of the best-known estates, such as Yannick Amirault, Domaine du Bel Air and Catherine et Pierre Breton. An up-and-comer is Domaine de la Butte, which was acquired by Montlouis master Jacky Blot in 2002. 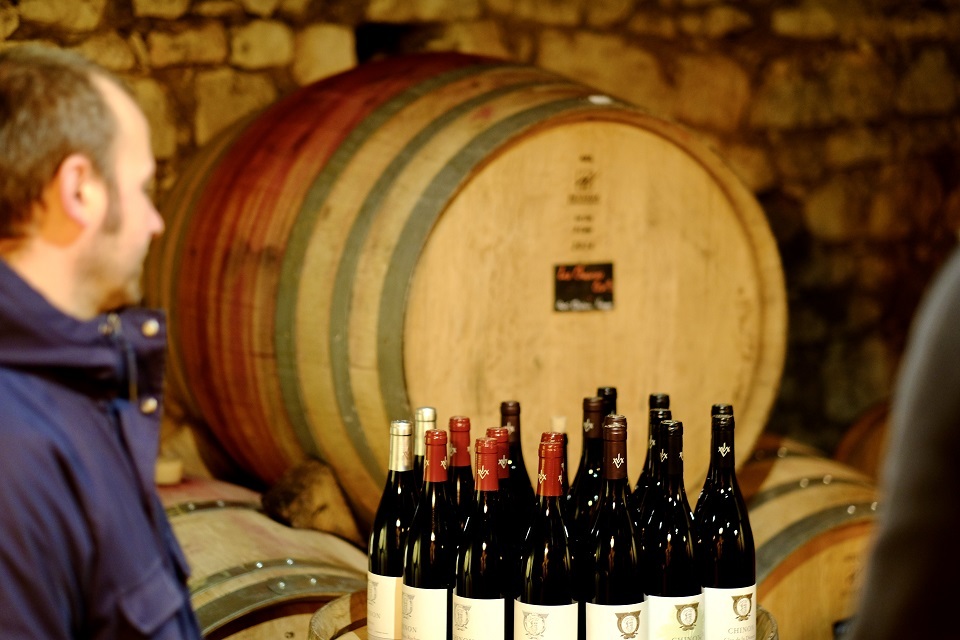 Tasting in the cellar at Charles Joguet in Chinon

Perhaps the most exciting appellation for reds is Saumur-Champigny, with around 1,600 hectares of tuffeau limestone. Here, small amounts of Cabernet Sauvignon and Pineau d’Aunis are permitted in the blend, though few of the top producers stray from Cabernet Franc. The estates to watch are Domaine des Roches Neuves, Château du Hureau and Domaine Bobinet. Clos Rougeard, run by eight generations of the Foucault family, has been Saumur-Champigny’s coveted cult producer for years – the estate that proved Loire Cabernet Franc could be world-class. Charly Foucault died in 2015, and the property was sold 18 months later to billionaire brothers Martin and Olivier Bouygues. Charly’s son, Antoine, now makes wine under his Domaine du Collier label.

Beyond the three key appellations, there is quite a bit of experimentation in Anjou, which is the locus of the natural winemaking crowd and much better known for white wine. Still, Cabernet Franc from the schist and quartz soils here creates unique and interesting wines. But Anjou isn’t the only place where innovation is happening. Many of the producers I visited were experimenting with aging in cement tanks, concrete or sandstone eggs, nontraditional barrels, or combinations of all three. Some expressions of Cabernet Franc are so far beyond tradition that they’re bottled with Vin de France on the label. 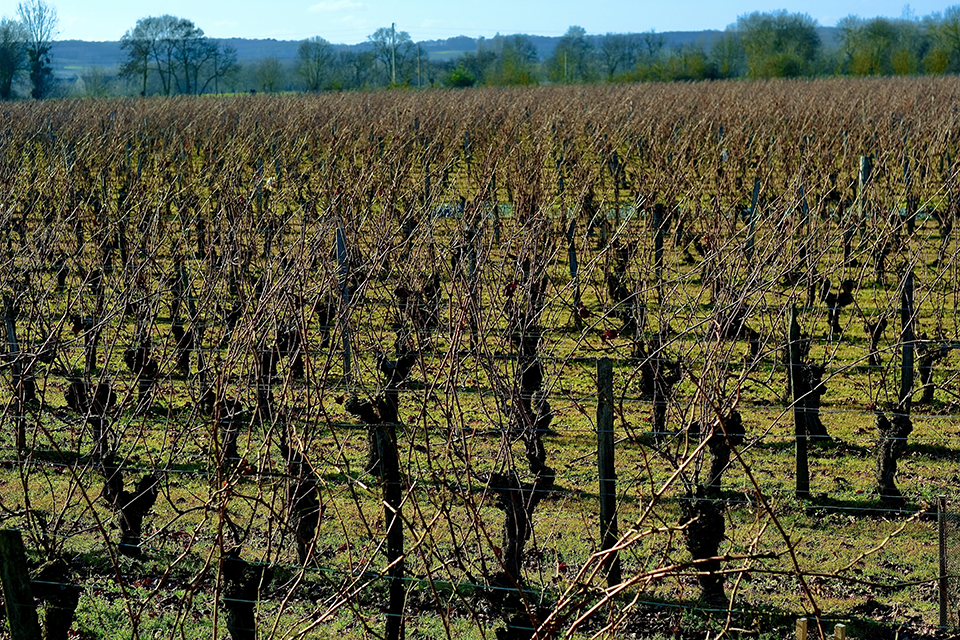 Many new ideas are floating around the Loire right now, and yet it still seems to be an immutable law that, when writing about Loire wines, one must mention François Rabelais, the great 16th-century writer and epicurean. Rabelais was born near Chinon and praised the local wines in his famed novel series The Life of Gargantua and of Pantagruel. I have now satisfied the tired Rabelais trope in this report. But since I’m advocating for a new way of looking at Loire wines, I propose we give the legend of Rabelais – and all the other old ideas about the Loire – a rest, at least for a little while. Do yourself a favor and discover the exciting, absurdly underrated wines of the Loire.