Despite the commercial success of sickly-sweet Zinfandel, dry wines are far easier to sell today than off-dry and sweet wines, as winemakers of the Mosel, Tokaji and Sauternes know only too well. The sweet wine community has grudgingly had to accept that these special wine styles cannot be sustained without producers evolving their business models to meet market demand. It’s no different in the Loire Valley. In last year’s report, Interpreting Chenin Blanc, I discussed the dizzying array of Chenin Blancs produced in the Loire Valley and the move towards drier styles. 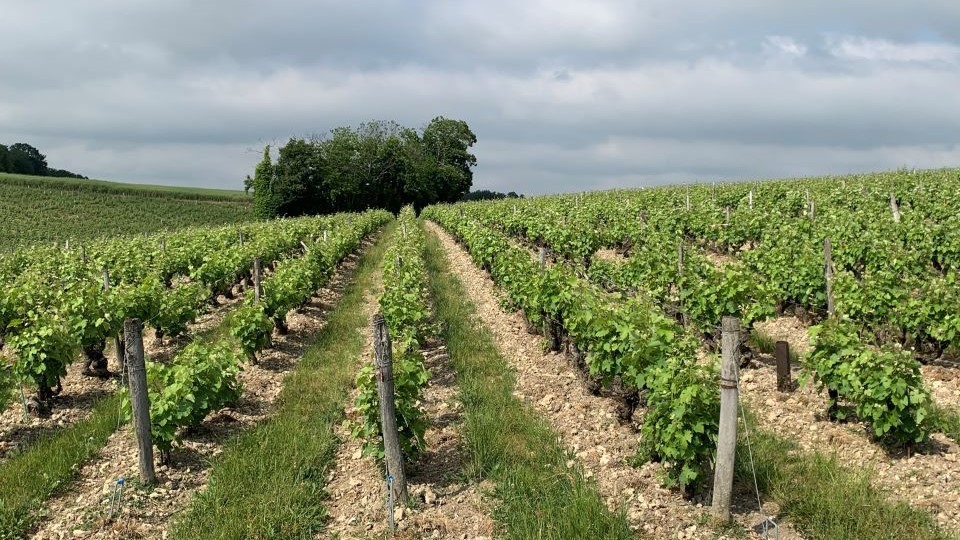 At Domaine d'Orfeuilles, in the north of the Vouvray appellation, 90% of the crop was lost to hail in June 2021.

Before global warming came along, this late-ripening variety’s high acidity levels required the sweet lick of residual sugar to achieve balance in much the same way that stewed rhubarb needs a generous sprinkling of sugar to stop your eyes from watering. It was hard to ripen grapes, and thus sweet wines were prized for their rarity value. But the general trend towards warmer seasons has increased ripeness levels and reduced startling acidity levels, allowing producers to make sweet wines more easily as well as ripe, dry whites. While recent years have often resulted in warmer summers and rapid ripening of the harvest, no two seasons are alike, and that’s illustrated in the contrasting 2020 and 2021 vintages.

Although the Loire largely escaped damaging spring frosts, there was no shortage of warmth in the summer of 2020. According to Météo France, the national meteorological service, 2020 marked a new record high for average temperatures across the country. Very dry conditions in July and heatwaves in early August meant that not only were the berries very small, losing weight through both heat and aridity, the vines suffered hydric stress, preventing maturity from progressing. While rains toward the end of summer gave the vines some much needed refreshment and allowed them to move towards maturity, they also heightened the risk of rot, and pickers had to be selective about their fruit choices. Harvest came early for most, but September was unusually warm, with a heatwave between September 13-17. Inevitably, sugar levels accelerated rapidly, leaving those who hadn’t picked early enough with some audacious potential alcohol levels. 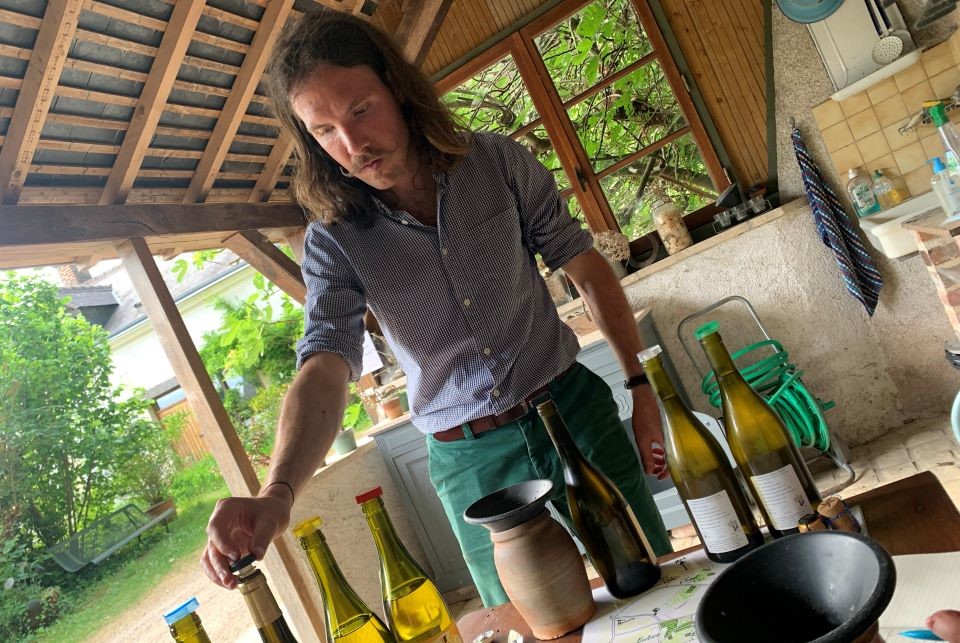 In the north-east of the Vouvray appellation, Julien Pinon's vineyards were hard hit by frost in 2021.

It will come as no surprise that such warm conditions created ripe, rounded styles. Final alcohol levels in many wines that were fermented to dryness hit 14.5% or even exceeded it. If your wines are fully ripe at 14 or 15%, it’s advisable to leave a bit of residual sugar or you will end up with a dry, alcoholic, hot wine. But that’s not what the market wants; a specialist importer in the U.S. estimates that they sell 50 bottles of dry Chenin Blanc for every bottle of sweet Chenin. “It’s clear that 2020 was a demi-sec year, but people made sec out of economic necessity,” explains Julien Pinon of François et Julien Pinon.

While Vincent Foreau of Domaine du Clos Naudin made all styles of wine in 2020, from fizz to sweet, which he achieved by passing through the vines on numerous occasions to pick at different ripeness levels, that isn’t always the case. In 2018, he deemed it impossible to make dry and sparkling wines, while in the cool, humid conditions of 2013, he only produced dry and sparkling. Foreau says: “if you have an objective and you force it, it will be unbalanced. You must respect the vintage.” That sentiment is echoed at neighbouring property, Domaine Huet. “We make what the vintages give us, so our production changes from vintage to vintage,” says Sarah Hwang, whose family bought Domaine Huet in 2003. In 2018, for example, 85% of the domaine’s production was sweet. “If we pushed for Sec in 2020, then we would not have had balance, and that’s what gives a wine ageability.” Sadly, many dry wines in 2020 aren’t balanced because the producer has made a dry wine with a high level of sugar ripeness, which dulls its aromas and leaves you breathing fire. 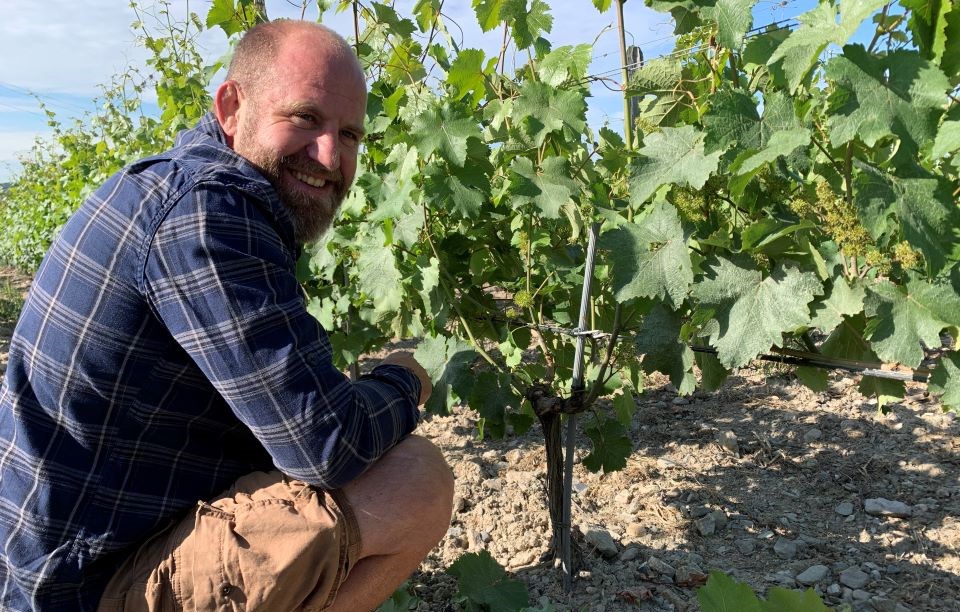 Following three warm vintages (2018, 2019 and 2020), you could be forgiven for thinking that we had waved goodbye forever to the days of racy Loire whites. However, 2021 proved that it’s not quite time to attend the funeral of cool climate Chenin Blanc. The growing season had it all: frost, rain, cold, hail, fungal disease and a desperate dip across the finish line.

Trouble was brewing early on. I remember spending my birthday in shorts and a t-shirt for the first time in my life. My birthday is on March 30. I live in the less than balmy north of England. Meanwhile, 600 miles to the south, the mercury soared past 25˚C in Tours. Inevitably, the buds thought it was time to burst despite a growing trend in the region to prune later in a bid to delay budburst. But with summer-like temperatures, growers were dealt with a cruel blow when there were 10 nights of frost from early April to early May. For those who didn’t lose a large chunk of their crop to frost, mildew was rampant in this wet season, and the miserly yields took further blows. There were patches of hail (in the Reugny area of Vouvray) and a tornado in Saint-Nicolas-de-Bourgueil. Unavoidably, yields were low, and based on the dreary summer, perhaps that was lucky. For example, on average you’ll have rain one in five days in July. In 2021, there was one rainy day for every three, making it the wettest May, June and July in 60 years. By the end of August, there was a lot of pessimism, but a burst of heat in the first two weeks of September pushed the grapes towards ripeness. Well, almost. 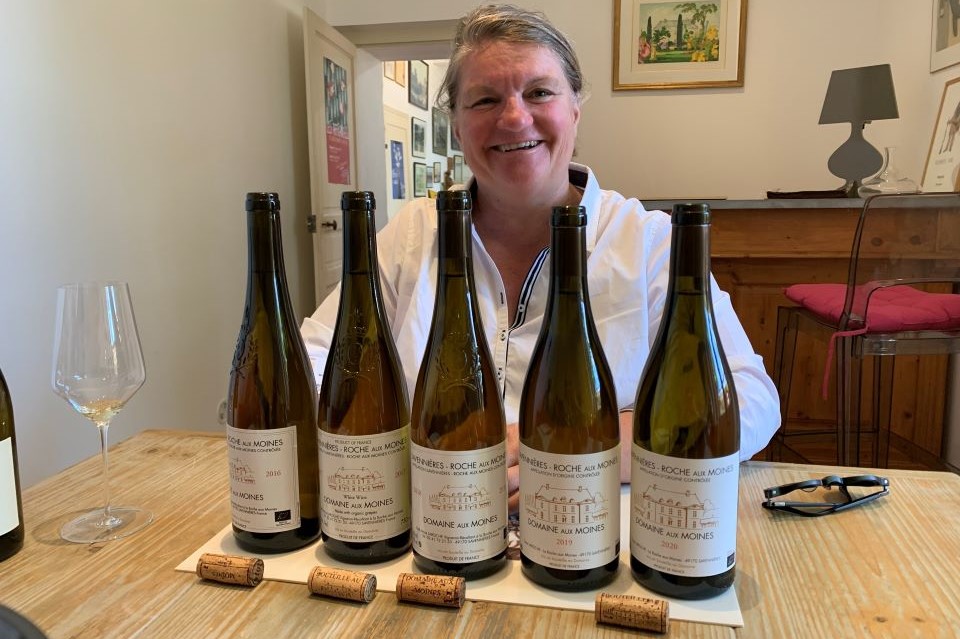 Tess Laroche always provides a warm welcome at Domaine aux Moines - unless it's Thursday, when she plays tennis.

Despite staggering to the harvest, the silver lining of the small crop was that growers were able to achieve greater maturity than they would have if the yields had been higher. The acidity levels can be bracing, creating some eyewatering, sour styles. There is a sense of raw austerity to these young wines unlike the immediate ease of the past three vintages. You’re going to have to like acidity in 2021, but there are already plenty who have handled their fruit well and have made some excellent wines that will age gracefully. But for many wines, a little bit of residual sugar would have brought balance rather than indigestion. What’s more, the appellation rules allow up to nine grams of residual sugar per liter for Sec styles and that could have given an impression of roundness and richness when nature failed to provide it. Winemakers have also attempted to build palate weight where it is lacking in the cellar through extended time on lees and even some bâtonnage. However, there were dangers with high solids fermentations and lees ageing in 2021. While many highly quality wine producers ferment fairly cloudy juice, the seemingly incessant rains during 2021 meant a higher number of sulfur sprays in the vineyard in an attempt to prevent powdery mildew.  Residual elemental sulfur from the sprays can cause problems for the fermentation including stuck fermentations and the tell-tale rotten egg smell of hydrogen sulfide. Increasing the clarity of the must can reduce the potential for off flavors. Tessa Laroche of Domaine aux Moines in Savennières transferred the lees from her barrels of 2020 whites to the 2021s to bring the texture she desired.

While the 2021 season was less than generous in its ripeness, it was also a lean year for yields, mainly due to frost and mildew. Julien Pinon usually produces 12 cuvées in the cooler reaches of the appellation, about five miles north-east of the village of Vouvray. In 2021, Pinon produced just two cuvées. It’s a similar story around the region with many single vineyards failing to provide sufficient fruit, requiring parcels that would normally be separate to be pressed and vinified together. 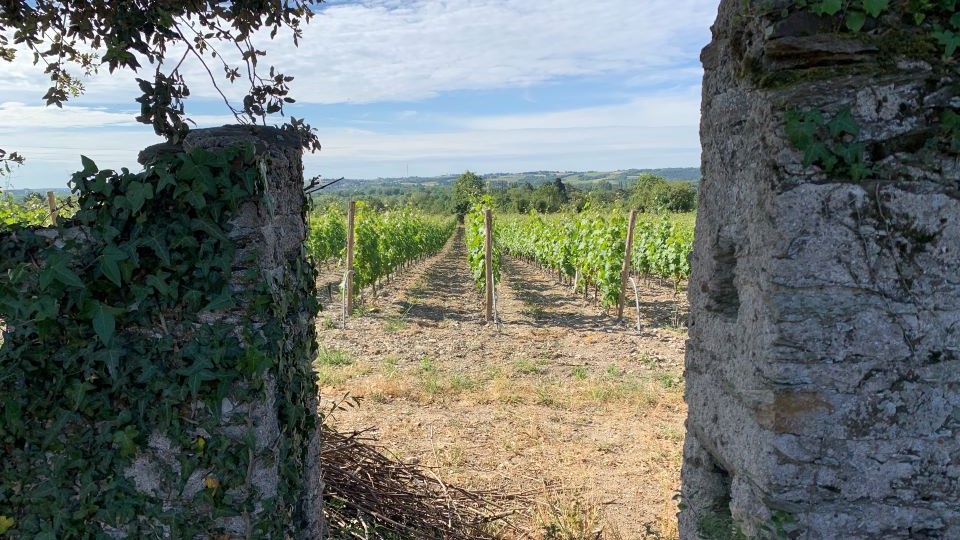 In 2021, as ever, the attention to detail by the finest producers and their sensitivity to the wines rather than to balance sheets has enabled them to overcome adversity. And, following three years of round shouldered, ripe Chenins emanating from the Loire, these taut, linear wines show that vintage variation is still alive and well. It is up to winemakers to produce their interpretations of each vintage, but the question remains: are they making the best wine possible from the fruit nature provides, or is it all about money?

The wines were tasted during the spring and early summer on a number of trips to the Loire with included visits to wineries as well as several wine fairs. A few small number were tasted at my home in England.

Loire Cabernet Franc: Who Do You Think You Are?, Rebecca Gibb MW, August 2022