In Jane Austen’s novel Sense and Sensibility, one of literature’s finest works detailing the ups and downs of courtship and matters of the heart, Mrs. Jennings suggests to Elinor Dashwood that she drink a slug of finest old Constantia to recover from a fever brought on by her romantic interest, John Willoughby. Jennings counsels that the sweet wine not only cures “colicky gout,” but possesses “healing powers on a disappointed heart.” While poor Elinor might have remained distraught over her wayward and untrustworthy lover, I am sure the Constantia served as a momentary balm to her heartache.

When I attended a brief but insightful vertical tasting of Vin de Constance on what transpired to be my last day in the capital before lockdown, thankfully I showed no feverish symptoms of either COVID-19 or a disappointed heart (or, for that matter, any colicky gout). But like those characters in Austen’s novel, I do appreciate one of the iconic sweet wines of the world – one that, as I shall describe, is undergoing a quiet revolution.

Before we get to that, a bit of history.

Simon van der Stel, the first governor of the Cape of Good Hope, established the original Constantia estate in 1685 and found that the valley facing False Bay was ideal for growing grapes, thanks to its decomposed granite soils and cooling sea breeze. But it was Hendrik Cloete who elevated Constantia and its sweet wine to an elixir a half-century later. He planted Frontignac, Pontac, red and white Muscadel and Steen (Chenin Blanc) and tended the vineyards meticulously. Crucially, long before laws were introduced governing wine origin on labels, Cloete called the wine “Constantia,” instead of “Madeira” or “Sauternes,” both established names that would have been an easier sell. Constantia sounded like a distant and exotic location to Victorian minds, and it quickly became renowned and highly sought after, particularly during the era when Cloete’s son Hendrik junior and grandson Jacob Pieter, who spoke fluent French, served as ambassadors based in Paris. They promoted Constantia around the Continent, and the wine further consolidated its renown after winning medals in several competitions. European courts demanded Constantia in preference to Tokaji Eszencia, Madeira or even Yquem. It was Napoleon’s favorite tipple in exile on St. Helena; consignments of it were regularly sent to royal families; and it was mentioned by Baudelaire, Charles Dickens and, of course, Jane Austen.

Unfortunately, pernicious phylloxera pays little heed to reputation, and decimated Constantia’s vineyards in the late 19th century, financially ruining winemaking families. Constantia as a wine was snuffed out, and for many decades it lived on only within the pages of literature. It was not until Duggie Jooste bought the estate in 1980 that plans for a phoenix-like resurrection began. In 1983, vines were planted; further expansion followed four years later. The 1986 vintage signaled the return of this historic wine, albeit to a limited audience during apartheid’s dying days. Only after the end of apartheid and the subsequent opening of the South African market did Vin de Constance retake the stage as one of the world’s iconic sweet wines.

In May 2011, Czech-American investor Zdenek Bakala and UK businessman Charles Harman bought the 146-hectare estate. The following year saw the addition of two shareholders from Bordeaux with winemaking in their veins, Bruno Prats (recently replaced by his son Jean-Guillaume) and Hubert de Boüard, proprietor of Château Angélus. Credit must go to winemaker Adam Mason, who improved both quality and consistency before he left for Mulderbosch in 2011 (his last day, if I recall, coinciding with my maiden visit). 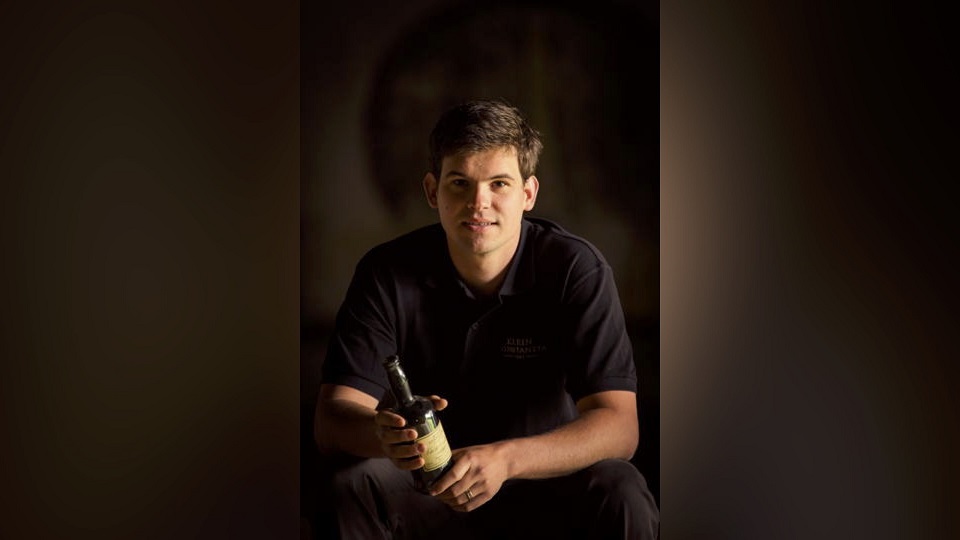 Winemaker Matt Day, at the helm of Klein Constantia since 2011.

Stepping into Mason’s shoes was never going to be easy, yet the young Matthew Day, who had cut his winemaking chops in Napa and Lalande-de-Pomerol, has done an exemplary job and taken Klein Constantia to a new level. I spoke to him via Zoom in early September 2020, and like most conversations these days, ours began with a discussion of the pandemic. Day explained that this year, he and his core team of resident workers harvested virtually the entire crop, since they were unable to recruit additional pickers. “It was hard work. We were picking the grapes and at the same time bottling the 2017,” he told me. “In 2020, winemakers are actually winemakers. I was unloading containers in a forklift, scrubbing the floors myself... everything. It gave me a new appreciation for what those guys do.” Furthermore, Day revealed that he has just taken over as cellarmaster for Anwilka, which he opined has been too Napa-like in style and needs to become more authentic, with greater sense of place. “Expect big things,” he forewarned, clearly excited about taking charge of this wine.

I wanted to drill down on the actual vineyard for the Vin de Constance.

“We now have a couple of blocks. The mother block was the first, planted in 1983 with old clones of Muscat Frontignan. From that we have isolated 100 different vines to create six clones through massal selection. In 2011 we planted bush vines to bring it back to the basics, since that was how vines were planted in the old days. Because of their shape, bush vines are better for raisining the berries and obtaining high concentrations of sugar. The 2017 is the first vintage with more of that bush vine effect. The vineyard now has around 50% bush and 50% trellised vines."

I remember touring the vineyard in a 4x4 with Day and taking photos of cute baboons that are protected in Constantia. Unfortunately, they are also a major pest, their nimble fingers plucking bunch after bunch of tasty ripe grapes for breakfast, lunch and dinner. “Baboons are a bloody nightmare,” Day complained with a hint of resignation, “but at least they are more spread out now. We were spending a million rand each year on baboon management. We have monitors and an electrical fence [I remember Day telling me that they had learned how throwing a baby baboon onto the wires would short-circuit the fence]. We still have a sacrificial block of Sauvignon Blanc that we leave for the baboons to eat. We even had a guy on a motorbike dressed in a lion suit playing lion roars through a loudspeaker! If only we could train them to harvest the grapes.” 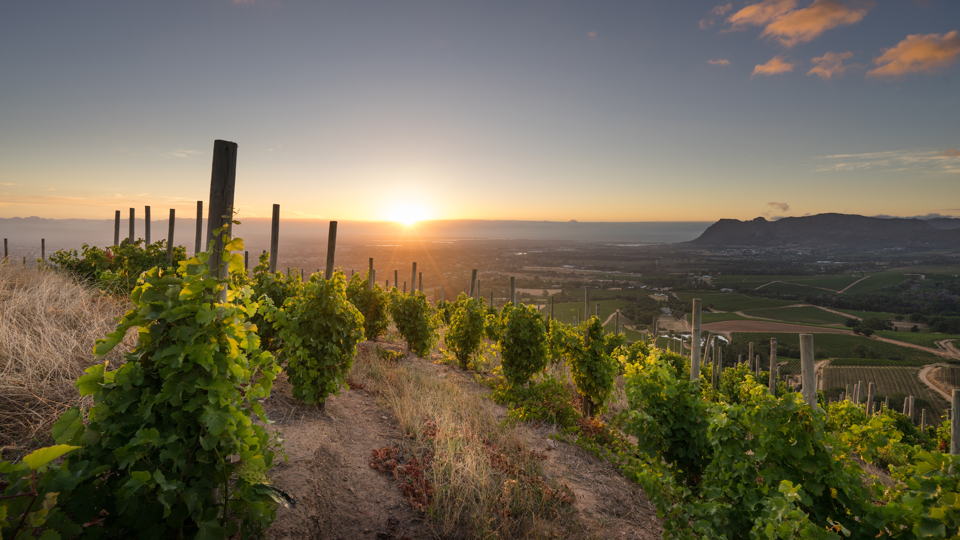 We moved on to discuss the most recently released vintage of Vin de Constance.

“Two thousand seventeen was a drought vintage. We started picking the 20 different batches from February 2 until March 20. Total acidity of the Vin de Constance is 12g/L with 165g/L residual sugar and 14 to 14.5% alcohol. That is what I aim for. I have now started to blend during fermentation, checking the sugar levels of batches every two or three days. I tweak it so that we ultimately end with around 165g/L residual, mixing greener juice with batches that have a higher alcohol conversion ratio and heading toward 190 or 200g/L. It means that I don’t have to intervene to stop the fermentation. The goal is to get the perfect natural balance. We used to acidify the Vin de Constance, but we only acidified the 2014 a little and 2015 and 2016 were completely natural. The difference is that it makes a Vin de Constance with less sucrosity. Now we make a sweet wine that does not taste sweet, so much so that in barrel, the 2018 and 2019 almost tasted like dry wines. Personally, I think the days of sweet wine are over.”

There has been another change in terms of barrel maturation. “The 2016 vintage was the first using 4,500-liter foudres. The current élevage is 18 months in 500-liter barrels, 60% new, during which you obtain complexity through micro-oxygenation. I eventually want to increase that to 100% new oak. Then there is another 18 months in foudres where there is less oxygen ingress, so the wine doesn’t go into a tertiary character. It keeps the color lighter, the aromas more delicately perfumed, the flavors more nuanced.”

The tasting notes in this report stem from the aforementioned London vertical last March, augmented with the latest release, the 2017 Vin de Constance. There is little that needs to be said beyond my notes. Older vintages from the 1990s have held up, though I feel some are beginning to dry toward the finish and should be consumed sooner rather than later. The wine achieves another level in the following decade under Adam Mason; the 2008 is stunning at 12 years old and likely to drink well for another 20 years. My pick of recent vintages is the heavenly 2012, which I remember Matthew Day enthusing about when I tasted it from barrel many years ago. It has certainly fulfilled its potential. The latest vintage, the 2017 Vin de Constance, is another to add to the canon of recent successes, perhaps not quite as thrilling as the 2012 but not far off. The wine has become more refined and poised, unencumbered by the sometimes heavy cloak of oak that can put some people off Sauternes and renders Vin de Constance easier to drink in its youth. Recent vintages have been marked by an attractive airy quality on the nose, like a discreet perfume that reels in your olfactory senses, an appealing lightness of touch that Day has clearly been aiming for. 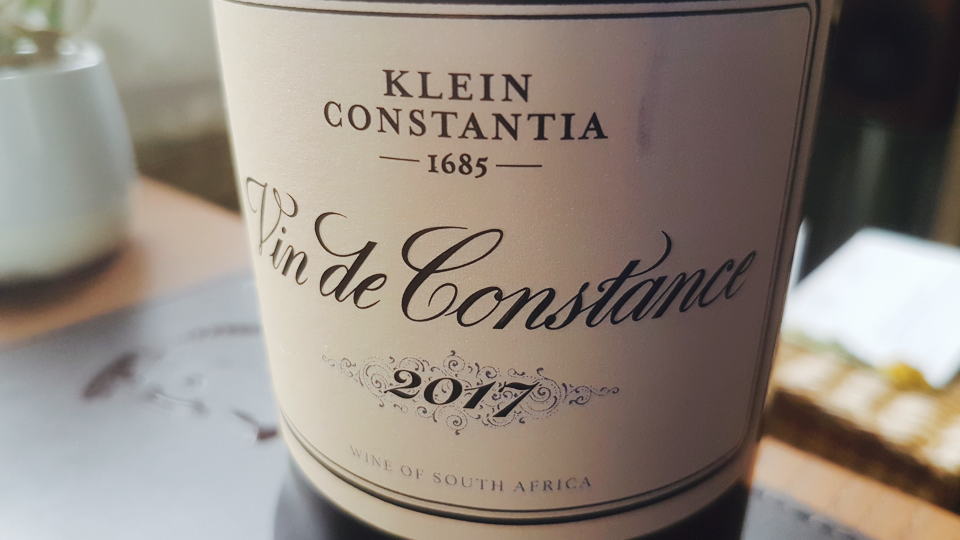 The Vin de Constance and all of Klein Constantia/Anwilka wines are now sold through the Place de Bordeaux, négociants taking around 80% of the production. Prices remain reasonable; the latest release is due to retail for around £40.00 per bottle or around $50–60.00 in the US.

It is clear that Vin de Constance is undergoing a quiet revolution under Matthew Day, an ambitious and talented winemaker whose experience belies his age. “We don’t care about history any more,” he stated emphatically as our conversation came to a close. “We are looking toward the next 300 years. Hopefully this will be seen as a pivotal moment in time.”

Well, here’s to the next three centuries. In the meantime, if you’re experiencing strife in your love life like poor old Elinor Dashwood, just reach for a glass of Vin de Constance.