Porseleinberg leads an impressive and growing fleet of world-class Syrah/Rhône blends from South Africa. Mark Kent, founder of Boekenhoutskloof, was foraging sources for his Chocolate Block label in and around Swartland when he came across a 173-acre namesake farm in Swartland. According to writer Tim James, Jaco and Yoland Marais owned the ranch. Some of the fruit was bought by Eben Sadie as part of early vintages of his Columella. Alas, the vineyard was damaged by wildfire, and the Marais’s struggled to stay afloat, eventually selling the farm to Kent in 2009 as Swartland was becoming the byword in excellence.

Kent recognized the potential of its schist soils on the Porseleinberg Mountain, a stone’s throw from the Mullineux’s Roundstone estate, and replanted the vineyard with Syrah and Grenache. His second astute decision was to install Callie Louw to oversee both the viticulture and winemaking and run Porseleinberg independently from Boekenhoutskloof. Louw is your typical chilled-out, free-minded Cape winemaker who is most content out in the vines or on his tractor. He lets the wines do the talking, and almost overnight, Porseleinberg rapidly became the Cape’s benchmark Syrah, inspired by Côte-Rôtie and to my mind, Jamet’s style of winemaking. Though I have tasted all vintages at their time of release, I rarely encounter back vintages. So my pulse quickened when Louw recently showed the first two vintages. The wines can be notoriously backward in their youth and demand several years’ cellaring. Some contend that they have become more approachable in the last couple of years, though Louw rebuked this when we met, countering that he wouldn’t know how to change his winemaking even if he wanted to! 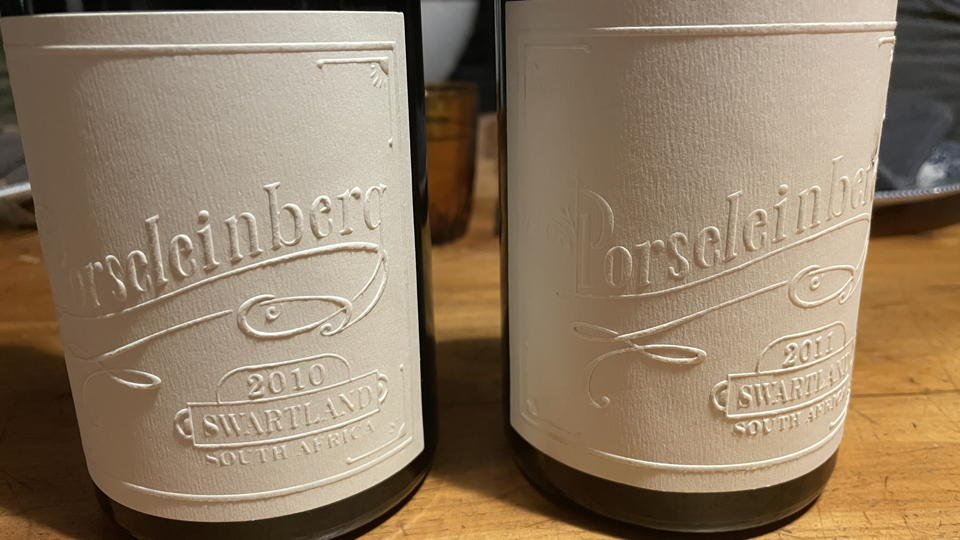 The 2010 Porseleinberg is a debut I have not tasted since release. Whole bunch fermented and aged 35% in concrete vats, the remainder in foudres, this awesome Syrah far surpasses my initial estimations. It delivers an intoxicating bouquet of black fruit, wild fennel, dried mint and sage, the kind of nose that evokes images of walking along a country lane in Provence on a hot July evening. The palate is beautifully balanced with lithe tannins, shimmering black fruit laced with aniseed, thyme and sage. There is an unerring sense of symmetry, and the finish is reminiscent of top-level Côte-Rôtie. It is simply magnificent. Whilst I would not begrudge anyone drinking this now, it clearly has a 30-to-40-year lifespan. 95/Drink 2023-2050.

The 2011 Porseleinberg never received a commercial release. Louw told me that with a depleted 1,200 bottles they opted to keep the bottles, occasionally selling dribs and drabs to visitors and a few leaked into local auction. Based on this showing, I hope that this sophomore does see the light of day. It is more understated than the 2010 yet delivers the same unerring delineation and poise, a little more tertiary on the nose, hints of morels and girolles permeating the black fruit. The palate is harmonious and fresh as a daisy. The satin-like texture is so seductive, and it fans out beautifully towards the finish with a little more red fruit than the entry. When this is belatedly released, don’t hesitate in trying to obtain a bottle. 96/Drink 2023-2050.