Domaine Rousseau did not put a step wrong back in 1985. At the time I didn’t care. I was at school, befuddled by trigonometry and traumatized by English grammar and, in any case, the current Burgundy vintage was never on the school curriculum. But in recent years I have been fortunate enough to taste most of Rousseau’s 1985s here and there and always come away with a spring in my step. Perhaps it was the influence of Eric Rousseau, who joined his father Charles in 1982 and introduced crop thinning and more organic viticulture in the vines. Most of my Rousseau-shaped encounters apropos 1985 predate the Domaine’s elevation to blue-chip status, before prices shot up into the “WTF” category. Sure, these days I could spend my children’s college fund on a bottle of 1985 Chambertin, but I don’t think that would go down well with my offspring as they desperately search for job without a degree.

Recently, my friend Dan Keeling, co-owner of “Noble Rot” restaurant in London, called to ask whether he should take a punt on a bottle of Rousseau’s 1985 Gevrey-Chambertin that had been perfectly stored since release. He told me the price. No denying it was extortion for a village wine...but not insulting. In the back of mind, I contemplated how well some of those villages performed at Tour d’Argent back in January. Why not give it a go? A few weeks later I met up with Dan and he generously popped open that very bottle. Thankfully it confirmed my view that grower and in particular, provenance, can transcend vineyard site and thereby save you a lot of wallet heartache. It was so divine that we both agreed that it cast doubt on the benefits of trading up to a Premier or Grand Cru. The 1985 Gevrey-Chambertin shows commensurate signs of ageing on the rim for a 33-year old Burgundy. The bouquet is just heavenly: exquisite definition, nothing powerful or ambitious, just pure shimmering Pinot Noir that is just so intoxicating. You would guess it to be a Premier Cru if served blind. The palate is beautifully defined and perfectly balanced. You might argue that it lacks the depth and grip of a more prestigious lieu-dit but the simple truth is that I care not a jot because the wine enraptures all the senses with its precision and harmony. You never want the bottle to end. Perfectly stored bottles like this can be enjoyed now or on this evidence, bestow another decade of pleasure. 93/Drink: 2018-2028 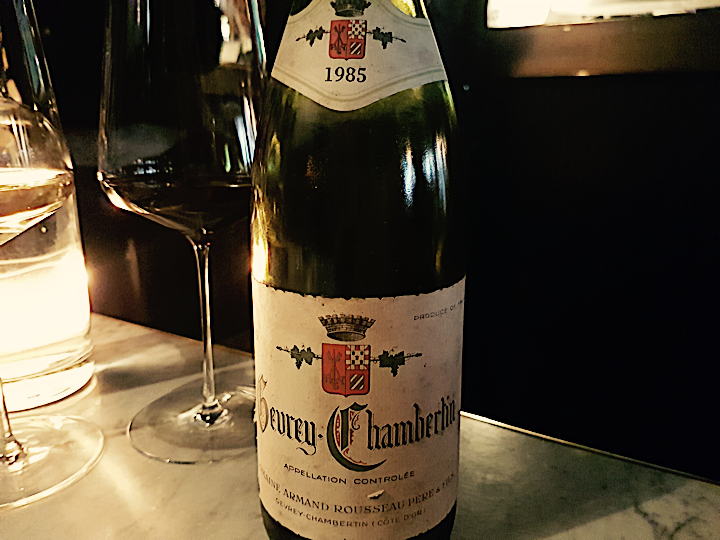