It’s not often that you stumble upon a truly great bistro where there’s someone with real talent behind the stoves. But so it is with Au Fil du Zinc in Chablis. A pretty interior, lovely views, precisely cooked flavorful foods and a great wine list make this place an absolute winner. 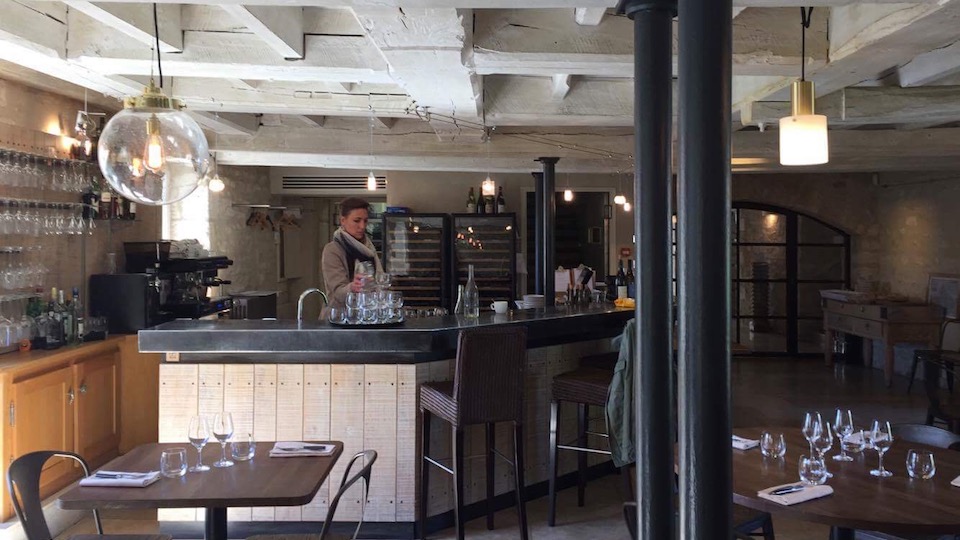 Au Fil du Zinc is an explosion of talent, good taste and great wines, and also one of the early candidates to make my Top Five New Restaurant Discoveries of the Year. The bistro boasts a smart, sleek interior decor with rustic country touches, a lovely view of the Serein river, a rather small menu where just about every dish is very precisely cooked and as good as it could possibly get, and a great wine list teeming with many great Chablis wines plus a reserve list of truly knockout very fairly priced bottles from all over the world and different vintages. Read’em and weep: Roagna, Domaine de la Romanée-Conti, Coche-Dury, Comte Lafon and many more await (in an effort to have these great bottles enjoyed by as many people as possible, the restaurant places a limit of one such bottle per table per sitting). Essentially, I walked out of Au Fil du Zinc convinced I had had a memorable lunch and was happy in the knowledge of a really noteworthy dining establishment to go to regularly. 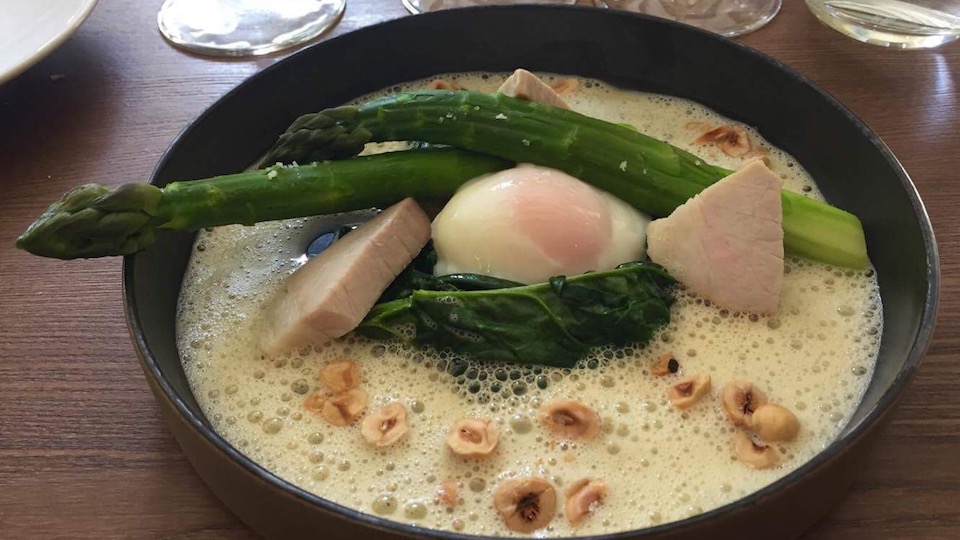 Au Fil du Zinc was previously known as the Laroche Wine Bar, but was renamed when Fabien Espana took over. Espana, previously at Le Soufflot in Irancy (his native town) now prowls the dining room at Au Fil du Zinc. His chef, Ryo Nagahama, trained at l'Atelier de Joël Robuchon and at Yannick Alleno’s restaurant Le Meurice, and was sous-chef at Joël Robuchon in Tapeï. He was most recently at Aux Bons Enfants at Saint-Julien-de-Sault. Nagahama’s small menu changes regularly and quickly, and is loaded with local fresh ingredients cooked in a fresh, crisp style. 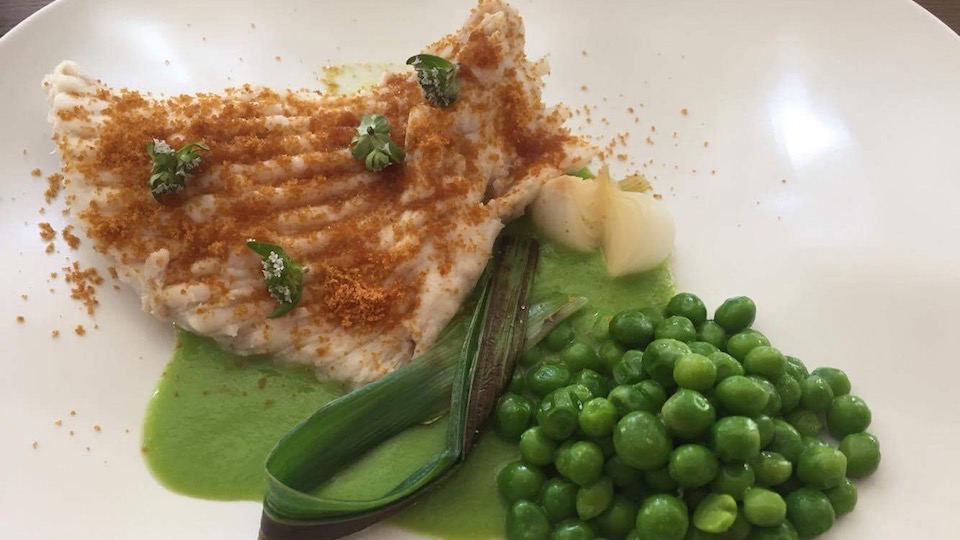 On this day, everything I tried was nothing short of spectacular. The asparagus, Vin Jaune sauce, country ham, egg parfait was so good I could easily have had another portion, although I can easily be accused of never having met a skate wing I didn’t think was just swell, the fact is that the skate wing, small peas, dried mullet roe dish at Au Fil du Znc was exceptional - tasty, moist and precisely cooked. The Clavisy lamb, tortilla, spring salad, and the apple tart served with maple ice cream, and Tonka bean were likewise excellent. This was bistro food at its very best. 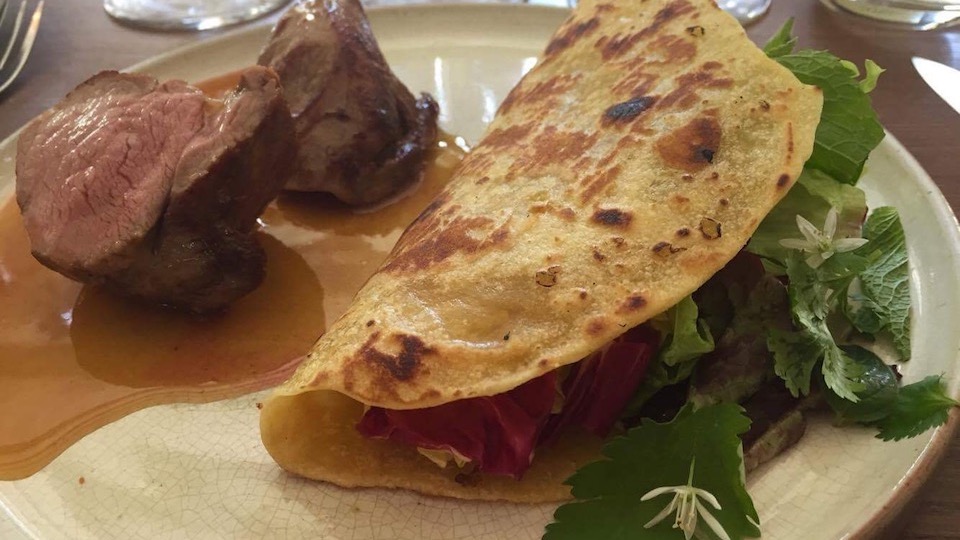 Great wines are everywhere to be had at Au Fil du Zinc, especially if you like Chablis. I literally didn’t know where to start. And while the DRC Echezeaux was offered at an especially tempting price, I opted for one of my favorite lunch games: “Pick your favorite Chablis Premier or Grand Cru wine of the day”. And so I chose four 2014 Chablis Premier Crus all from the same vineyard and from reputable producers, and decided not just which I liked best but also which paired best with the food I was having. I chose to compare wines from the famed Montée de Tonnerre Premier Cru, which has always been my favorite Premir Cru of all (though in a sign of just how diverse and complex Chablis wines can be, I love a good Fourchaume and Vaillons almost as much, which is interesting, given that these crus give entirely different wines from Montée de Tonnerre). A highly calcareous-marly site on the right bank of the Serein river, Montée de Tonnerre has long been viewed as giving the most complete Premier Cru wines that are practically (almost) of Grand Cru caliber. The 2014 vintage in Chablis was cool, and the wines are particularly mineral and food-friendly, if still extremely young, and so it was both fun and very instructive to compare efforts from some great names in the area. 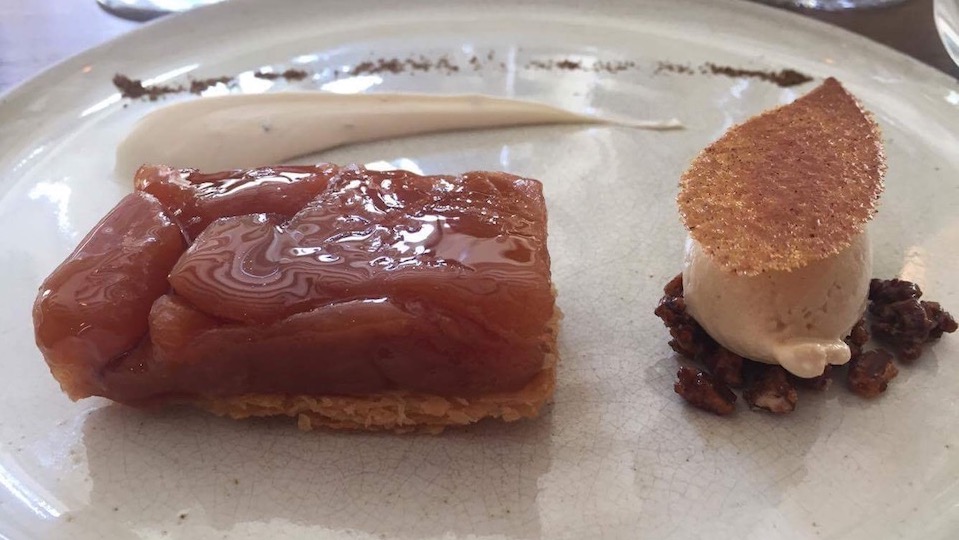 The 2014 Billaud-Simon Chablis Montée de Tonnerre is a simply outstanding wine; minerally pure, lemony and still very backwards. I kept going back to it time and again. Just as good, if in a completely different way, was the 2014 Jean Collet Chablis Montée de Tonnerre, which unlike the Billaud-Simon that sees no oak whatsoever, is aged in French oak barriques (10% of which are new). The wine is much rounder and mellower than the Montée de Tonnerre by Billaud-Simon, and still needs to lose its youthful vanillin cloak. Still, there’s plenty to like here, with lovely aromas and flavors of pure fruit, orange oil, oyster shell and warm croissants that are laced throughout. 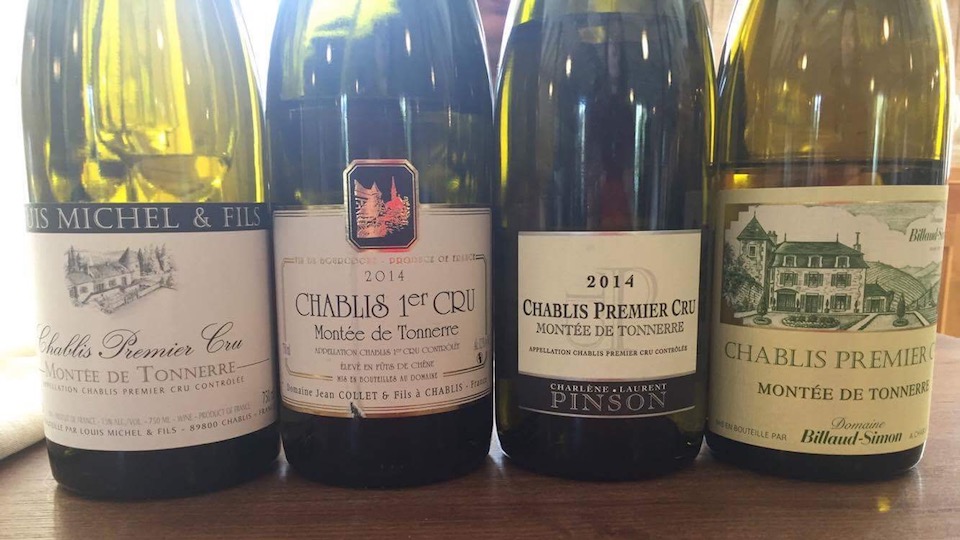 Another stainless steel aged-only wine followed, the 2014 Louis Michel Chablis Montée de Tonnerre. It was just as lemony but slightly softer than the Billaud-Simon, but with the same laser-like precision and length. Our last wine was the savory, forward 2014 Charlène et Laurent Pinson Chablis Montée de Tonnerre, that had stronger herbal and musky underbrush notes than the other wines. The winner of the lunch was the Billaud-Simon, but the Collet matched better with some of the richer dishes tried. All in all, this was a great lunch spent in the company of great food, wines and friends. 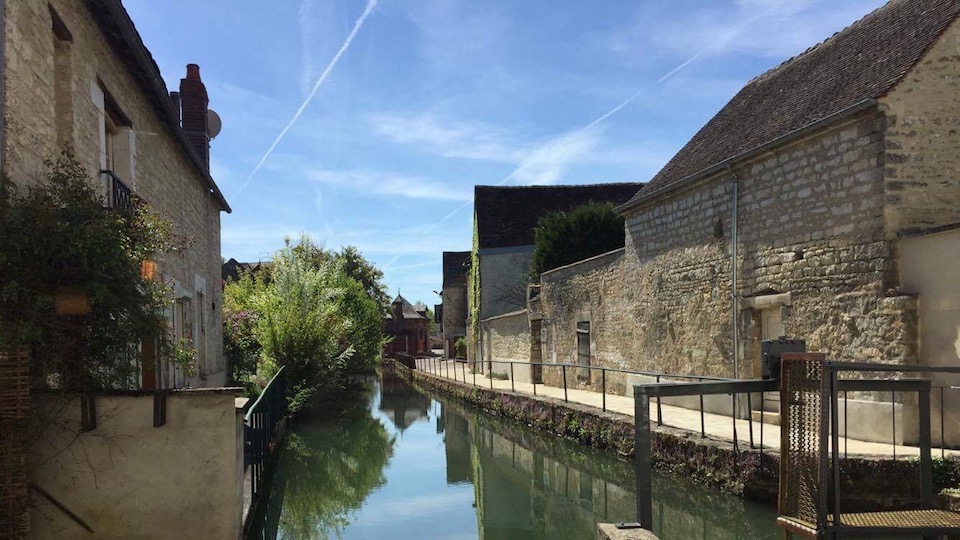