Bolzano’s Parkhotel Laurin is not just the most prestigious and beautiful in the city but it also boasts the city’s most interesting restaurant. Rising star chef Manuel Astuto appears to have a great future ahead. A very good selection of fairly priced wines from Alto Adige and the rest of Italy makes dining here even more enjoyable.

The name of Laurin’s chef Manuel Astuto may not yet ring bells with accidental foodies or even regular restaurant goers, but this seriously talented young man is going to become much better known fairly quickly. My meal at the Laurin revealed noteworthy cooking ability, with a deft use of spices (Astuto and the restaurant participate in the Fair Cooking program and so source Fair Trade ingredients such as Mascobado cane sugar, quinoa and cardamom) and wholesome, precise flavors.

Founded just over 100 years ago, the Parkhotel Laurin is Bolzano’s prettiest and grandest hotel. This luxurious establishment is very conveniently located a five-minute walk from Bolzano’s train station and so it is the perfect spot to stop by and have a drink, should you have some time to kill. In fact, the hotel boasts not just a lovely restaurant and outside eating area, but also a very comfortable, spacious, hip bar I strongly recommend. You might just run into a local or visiting wine producer or two. 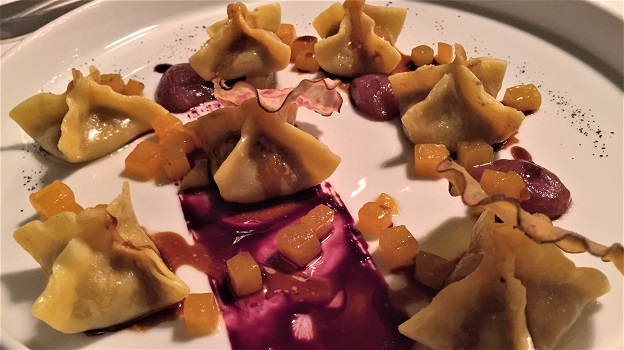 The restaurant’s dining area is well designed, with well spaced out tables and attentive, very helpful and friendly service; the staff clearly aims to please and I am always appreciative of such an effort. The cuisine is based on traditional Alto Adige dishes with some creative twists thrown in for good measure. The solid wine list is well managed by sommelier Ulrike Rassler and her team. An added bonus is that wine prices are mostly reasonable, which is yet another reason why I am always happy to eat here. 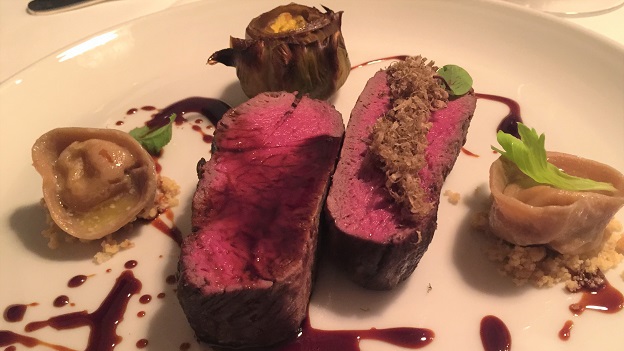 I had a simply wonderful meal at the Laurin this time around, probably the finest I have had. The wild boar ravioli with red beets and Port-infused grapes was the best dish of the night, with the intensely concentrated and savory pyramidal ravioli lighting up the mouth with an explosion of flavor. Almost as good was the very tender saddle of venison, with just the right amount of gaminess to the meat. Bollito Misto is a classic northern Italian boiled stew, not unlike France’s pot-au-feu, mixing up tougher cuts of beef and veal, cotechino, and hen or capon that are simmered for several hours, usually in an aromatic vegetable stock. Laurin’s version was just fine, but not especially memorable; and though the Bollito came accompanied with two different sauces, I was chagrined to find there was no mostarda served with it, and none was available. 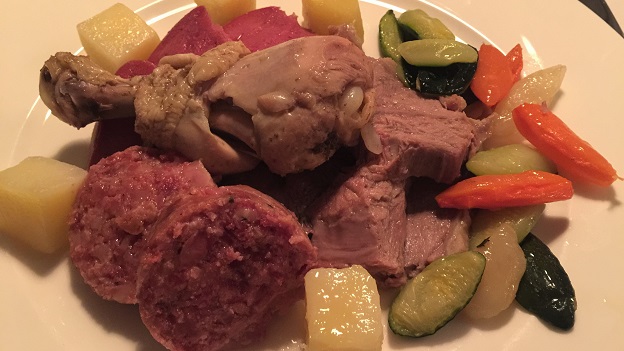 What undoubtedly helped make the meal better were the wines I chose to drink on this night. The 2015 Pacherhof Sylvaner Alte Reben is yet another successful Sylvaner from Valle Isarco, an area of Italy where this grape can produce wines to rival those of Alsace and parts of Germany. This was an especially rich Sylvaner, made in the usual rich, glyceral and tactile Pacherhof style, and offered ripe peach, pineapple and chamomile aromas and flavors. I liked it, but generally find that the fresher versions of many of Pacherhof’s Valle Isarco colleagues are more up to my alley. The 1994 Soldera Brunello di Montalcino can be a tough wine to choose off wine lists, given its cost. Tough because I have encountered noteworthy bottle variation with the 1994 over the years; some bottles were much, much better than others, and for no clear reason. Certainly, the 1994 vintage was nothing to write home about in Montalcino (and all of Tuscany, for that matter) because of extreme summer heat that in many cases cooked grapes directly on the vines. That said, this turned out to be the best bottle of Soldera’s 94 Brunello I have ever tasted; still bright red in color, perfumed, with layers upon layers of ripe red cherry, strawberry, tar, licorice, and none of the angular, lean fruit and high acids that I remembered from some past bottles. 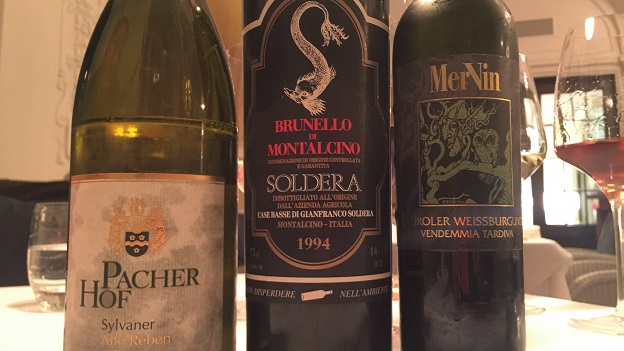 Last but not least, the 2005 Cantina Produttori Burggläfer Weissburgunder Vendemmia Tardiva MerVin was a rich, unctuous late harvest Pinot Bianco (Weissburgunder in German) that is holding up beautifully and still has a long life ahead (more so than some other vintages of this wine). It boasted intense honeyed tropical fruit and peach aromas, with precise and luscious flavors. Readers should note the Burggräfler cooperative (founded in 1952) that made this wine no longer exists. In 2010 it merged  with another cooperative, the Cantina Produttori Merano (founded in 1901), giving birth to a new entity called Cantina Produttori Meran Burggräfler.