The Lake District is a magnet for those seeking lakeside panoramas and bracing walks across the fells, or simply wishing to retrace the path where Peter Rabbit hopped out of Beatrix Potter’s imagination. For this writer, the allure of the Lakes is strongest when they are veiled in midwinter gloom; it brings out the majesty of the rain-lashed hills, tumbling screes and mountaintop tarns. Directly east of the Lakes is the western flank of the Yorkshire Dales, a vast nothingness of moorland, hidden valleys and babbling brooks populated by grazing sheep and villages searching for a raison d’être. I headed here for a New Year break, to the village of Sedbergh in the Lune Valley. It is one of this country’s three official “book towns,” boasting eight independent bookshops and an annual book festival, an initiative designed to boost the local economy after foot and mouth disease. But I didn’t choose this destination for literary reasons; I wanted to check out The Black Bull and booked two dinners during my stay. 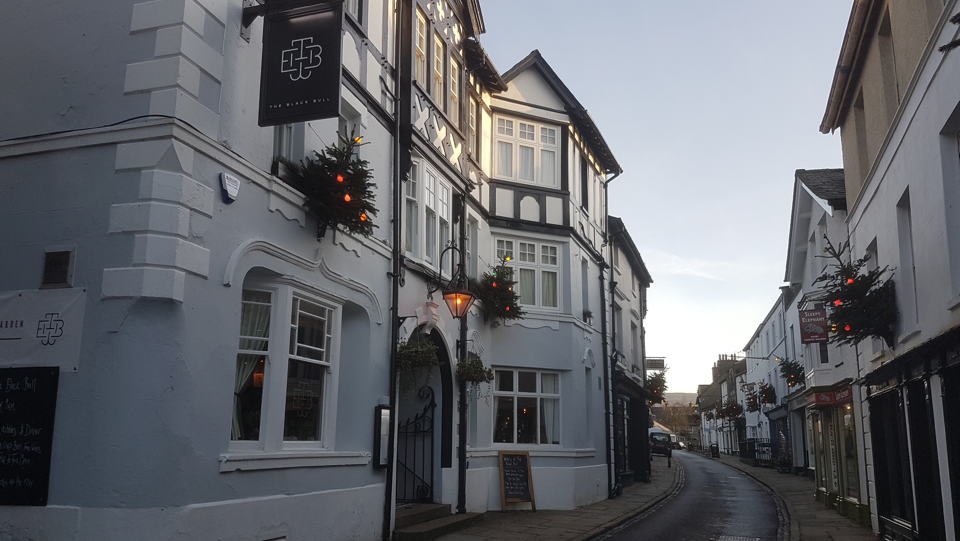 The main thoroughfare of Sedbergh. Interesting positioning of Christmas trees, don’t you think?

The Black Bull is located in what was once a 17th-century coaching inn, its thick walls sheltering guests from the inclement weather and manifesting a warm feeling of coziness that the north of England excels at. A bar greets you at the entrance should you fancy one of several excellent local ales, and the restaurant is snugly fitted on the right. The owners are husband-and-wife team James Ratcliffe and Nina Matsunaga. Ratcliffe trained in the hospitality industry before meeting his wife in 2010. Matsunaga has Japanese parentage but was born and raised in Düsseldorf, Germany. Together, they established a successful catering business around Manchester before relocating back to the Lune Valley, where they founded lauded café-cum-bakery The Three Hares, which is just a few meters down from The Black Bull. They acquired The Black Bull in 2018 and – much like The Wellington Arms, which I reviewed in a previous Vinous Table – turned the upper floors into a smart, bijou hotel and the ground floor into the bar and restaurant. The menu is just what you look for in a rural restaurant in these parts: locally sourced traditional English dishes from Cumbrian farmers, ostensibly hearty fare to warm you up after a hard day’s hiking over moorland. Matsunaga’s heritage lends a subtle Japanese spin; you are unlikely to see karaage on many pub menus. 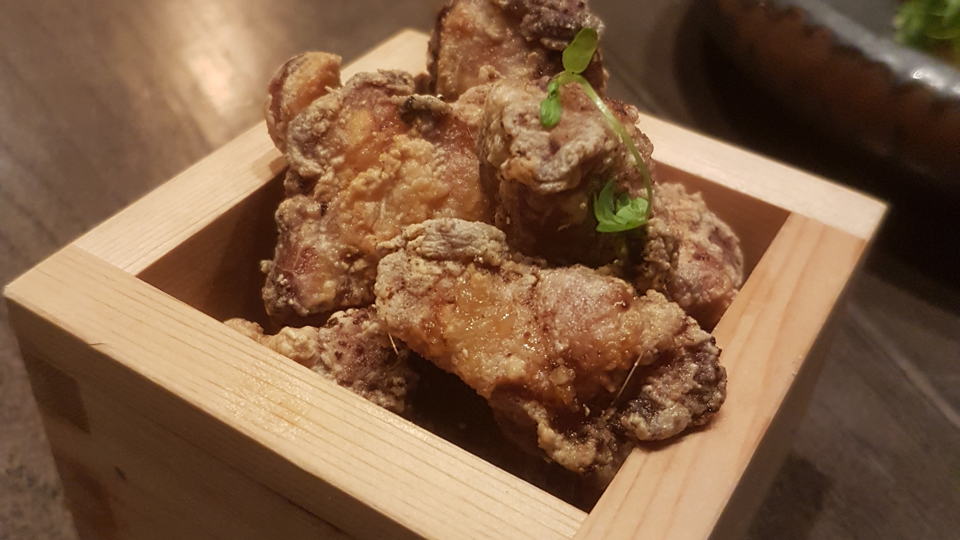 A nice touch: the karaage served in a traditional Japanese wooden box

And this is where we began. I am a huge fan of karaage, which is deep-fried chicken traditionally coated in soy, sake and ginger. (Mrs. M has perfected her own recipe but refuses to reveal her secret ingredient.) Matsunaga uses wild rabbit instead of chicken, a perfect substitute since it has a consistency similar to chicken thigh, although pernickety me might have added a pinch more spice to the coating. 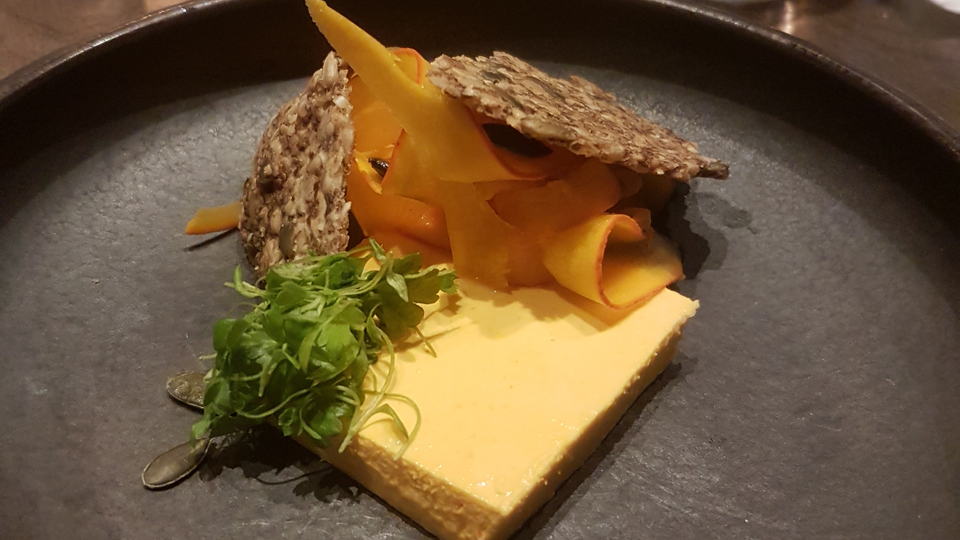 Pumpkin panna cotta – one of their best dishes

The other starter was superb: shaved raw pumpkin served with pumpkin panna cotta and a wafer biscuit with grains (caraway seeds certainly in the mix) and black pepper. This was a knockout dish, subtle in flavor with just the right amount of sharpness. And before I move on, I must mention the outstanding sourdough bread that came with an equally outstanding pistachio butter. 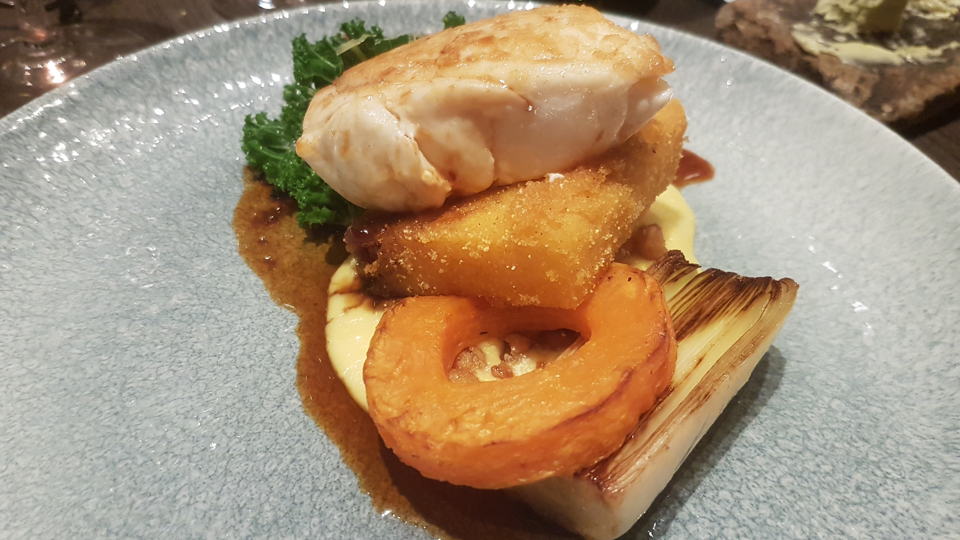 For the mains, we chose a variety of dishes. My wild halibut was perfectly cooked; likewise the accompanying ring of butternut squash that delivered melt-in-the-mouth consistency while the charred leeks provided crunchiness. The corn lent texture to the creamy sauce and the kale contributed a welcome bite, lest the dish taste cloying. This was a wonderful, surprisingly hearty dish that was very well executed and displayed the subtlety of Matsunaga’s cooking. 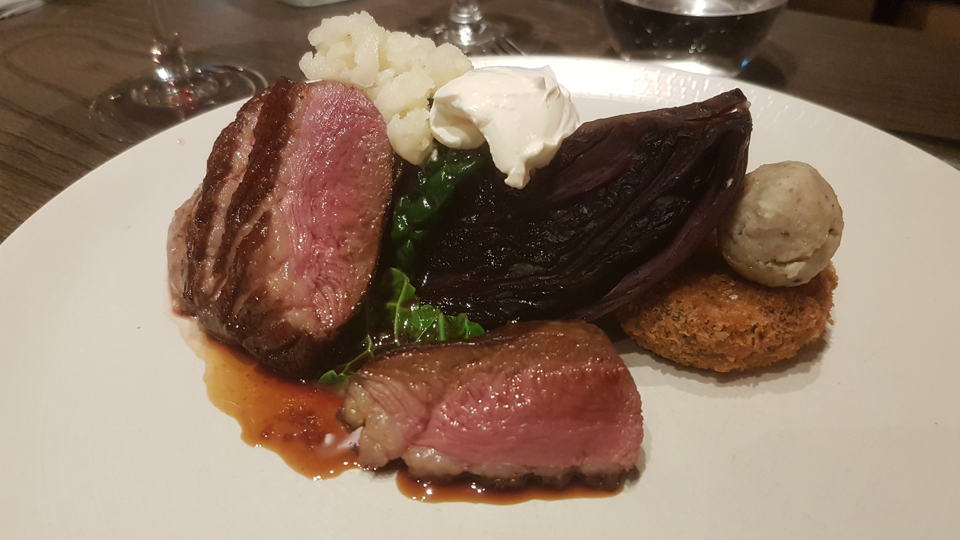 Since it was the festive season, we had to order the locally sourced apple-fed goose in a Japanese yuzu dressing with bone marrow dumplings and cabbage. The goose was pink, perfectly cooked and without excessive fat. It combined beautifully with the bone marrow dumpling, whose flavors oddly reminded me of chestnut. On the other side of the table, it was obligatory, no-messin’, tummy-fillin’ beef pie with creamy mash, the meat lean and packed full of flavor, the pastry crust not too dry and not overly moist. 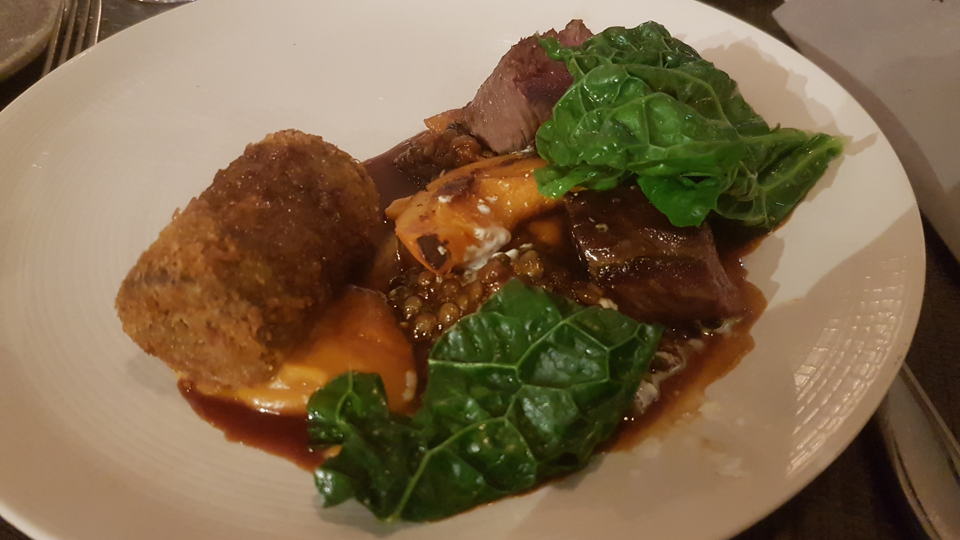 On the second visit, I opted for the Howgill Herdwick lamb with Moroccan spices, lentil, apricot and squash, and kale. This region is the cradle of Britain’s finest four-legged animals that moo and bleat, and Herdwick is native to hillsides above 1,000 feet and a favorite breed of sheep for many fancy London restaurants. It was no surprise to find the lamb extraordinarily tender, though had I not been on a meat-restricted diet, I might have wanted a little more on my plate. It was hearty fare, rich in flavor and not overpowering; the lentils were a wise choice since they kept the dish light and healthy.

For dessert, the chestnut parfait, pecan and pear was light and airy, the parfait wonderfully executed, though I felt that the pecan flavor was a little too subtle and needed to be brought out more. Better was the orange mousse with aerated white chocolate and meringue, an irresistible combination, fresh and light; slices of fresh orange imparted a welcome bitterness to offset the sweetness. Both dishes were on the not-too-heavy side, unlike the sticky toffee pudding, which oozed deliciousness and probably used up my entire calorie intake for 2020. 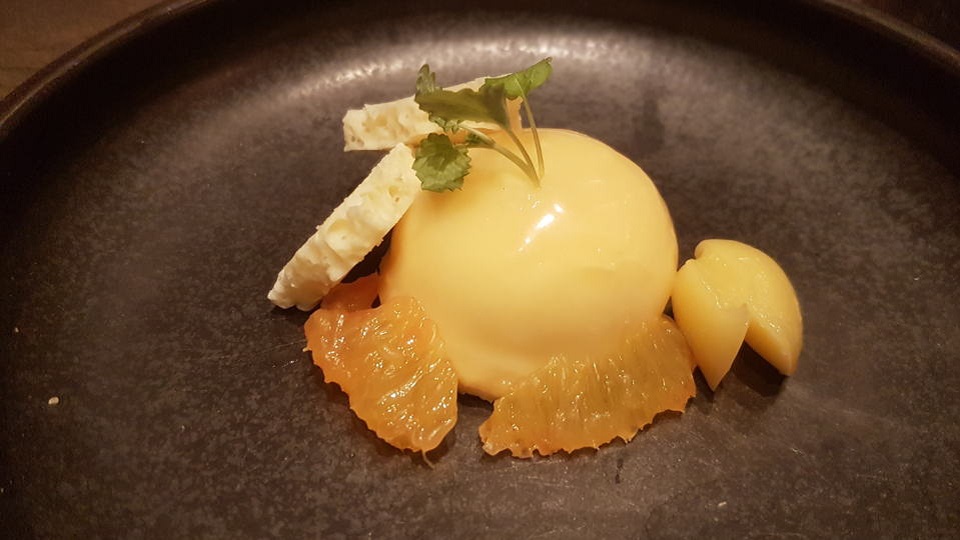 The wine list is definitely worth mentioning. Speaking to Ratcliffe about the vinous fare and reading the preamble to the list, I noted a clear intention to create an eclectic, perhaps “funky” list that seeks to expand horizons without breaking the bank. One aspect I must commend is not just the range of wines by the glass, but the fact that they stretch from entry level to the more expensive wines. I also appreciate a menu that clearly explains and indicates organic, biodynamic and low/no SO2 wines (orange wines were even separated into their own section so I could avoid them!) There are a dozen or so Japanese sake, although I did not partake on either visit. Prices are keen, with most bottles between £30.00 and £60.00.

I started with a Sicilian IGT, the 2017 Regaleali Bianco from Tasca. I loved this. The nose bursts with red apple and floral aromas, hints of white peach and shellfish emerging with time in the glass. The palate is both weighty and decidedly saline, and blessed with a pleasant bite on the finish that keeps you coming back for more. I do not drink Sicilian wines enough, and this modest white was a reminder of how good they can be. Then I chose the 2017 Albillo Real La Viña de Ayer from Soto y Manrique, from the Spanish DOP of La Sierra de Gredos, because I had good experiences with this lesser-known grape variety. Alas, this was not a great example, being worryingly deep in color, rather flat on the nose and slightly oxidative on the palate, although it demonstrated decent precision on the finish. The third white was a 2018 Muscadet Symbiose, courtesy of Michel Delhommeau, which comes from three hectares of limonite soil. There was a little cloudiness in the glass and I wanted a bit more salinity and sea spray on the nose. The palate was better, delivering a pleasing sharpness and energy. I finally found the desired tang of saltiness on the finish, mixed with touches of pink grapefruit and stem ginger. Intuition tells me that another bottle might taste better. 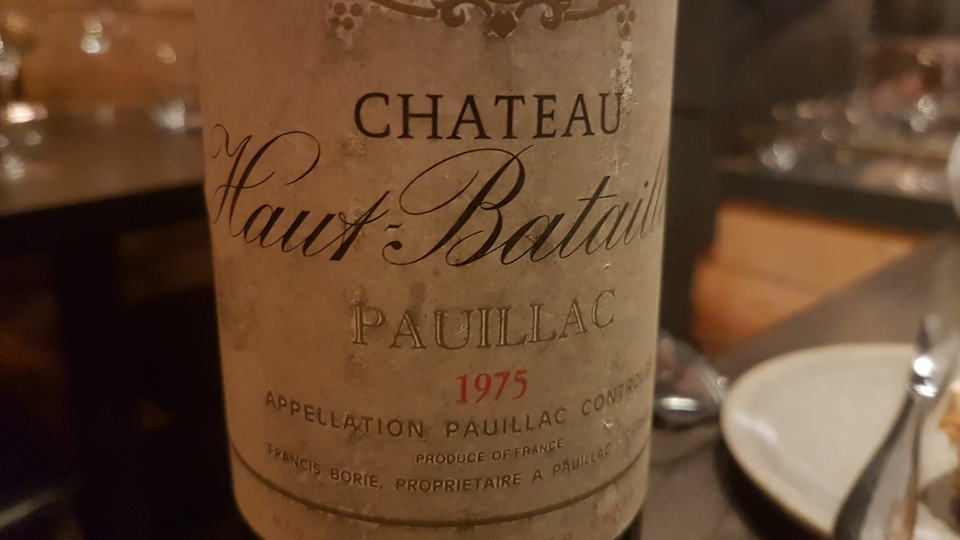 For the reds, the restaurant allowed corkage on a bottle of 1975 Haut-Batailley. Left Bank wines born in this vintage have a propensity to be tannic and very austere. This, plus the fact that in this era, Haut-Batailley was a rather down-at-heel estate, meant that my hopes for this Pauillac were tempered. Well, blow me down if this bottle didn’t exemplify everything I love about proper mature claret! Clear in color with just a little bricking, it sported an elegant tobacco and autumn leaf bouquet, thankfully replete with more residual fruit than other 1975s I have encountered, maybe even compared to Grand Puy Lacoste. The palate is well balanced, mellow and harmonious. There is nothing complex or profound; it’s what you might call an “honest” mature Pauillac that is comfortable in itself. It passed the crucial test: the bottle was polished off in no time at all. If you happen to find an example with sound provenance, then it comes highly recommended.

At the other end of the spectrum, I took a punt on the 2015 Modra Frankinja from Aci Urbajs in Slovenia. This biodynamically grown Blaufränkisch cuvée is limited to 600 bottles and sports a label that declares “ORGANIC ANARCHY.” Their wine list alluded to Burgundy Pinot Noir in all but name, and though I think there is a tangible difference, I can see where they are coming from. Black plums and cola on the nose, and just a tad too much VA for my liking, although I appreciated the soft, pliant palate and the balsamic-tinged red plummy fruit, perhaps just missing a little complexity on the finish. The 2017 Aunis L’Étoilé from Deboutbertin is 100% Grolleau from 3.5 hectares of 60-year-old vines close to Faye d’Anjou, matured for 12 months in old barrels without any SO2 addition. Sound the “Natural Wine” klaxon! There was initially a bit of funk on the nose (baby’s nappies!) although this ebbed away to reveal attractive red cherry and cassis fruit. It really hit a home run on the palate, delivering vivacious maraschino cherry fruit, blueberry and a touch of orange peel. The wine came across as a delicious Loire red rather than a natural wine. Just superb. Finally, a Barbera and Nebbiolo blend not from Italy but from the Adelaide Hills. The 2017 Unico Zelo from Truffle Hound oozes black currant and hints of camphor and licorice on the nose, quite antipodean despite the blend, the palate lush and sweet with morello cherry, cassis and hints of bubblegum on the finish. It did not pack a load of complexity, but it was smooth and harmonious and kept its hedonistic tendencies on a leash. I appreciated its easygoing, laidback personality and sheer drinkability. 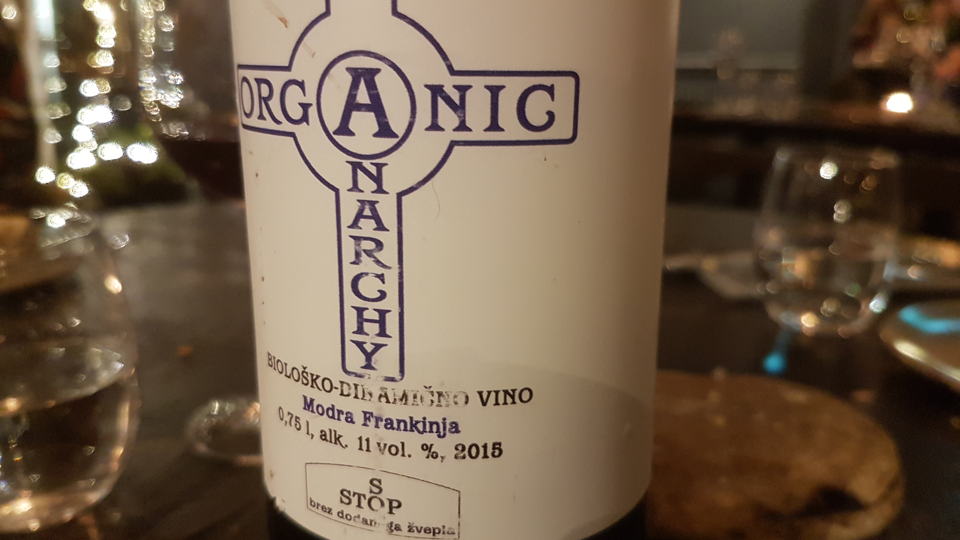 The Black Bull is certainly worth a detour over to the “wrong” side of the M6. It’s not fancy or pretentious, but Matsunaga gives the traditional dishes a sense of modernism and sophistication, while at the heart of every mouthful is a sense of meticulous sourcing from this most beautiful part of England. Restaurants such as The Black Bull play a crucial role in attracting tourists and epicures to less-traveled parts of the country, and reasonable prices mean that you are not breaking the bank for either food or wine. And since the menu is being continually tweaked, this is a place that will keep you coming back, as we did two days after our first visit.