We all have favorite restaurants. Aux Armes de France is one of mine. I can’t even remember the first time I ate here (must have been in my teens) but what I do know is I’ve never stopped coming back. The place isn’t fashionable or hyped, and the interior dining room, though cozy, is a bit dowdy and dark (there is a pleasant, surprisingly modernist outdoor space that fills up very quickly come spring and summer). However, Aux Armes de France is extremely successful thanks to the sound cooking of traditional Alsatian and French recipes, professional service and a wonderful list of Alsatian wines (though the list is getting picked over and some older vintages that I no doubt contributed to reducing in number over the years are now no longer available). 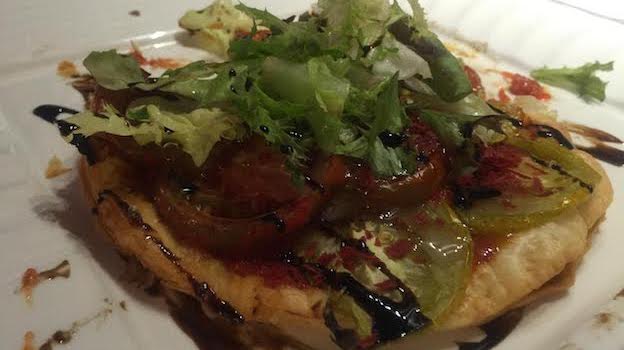 Thin flaky tart cooked on the spot with tomatoes

The key is Chef/Owner Philippe Gaertner, who has been running Aux Armes de France with his wife Simone Freymuth (also born into a family of restaurateurs) for nearly thirty years. Gaertner, a cooking talent who has trained with some of the best, including Paul Bocuse and Gaston Boyer, in addition to a stint at the Lucas Carton in Paris, has the rare knack for making complicated things seem simple (and taste good). He is also remarkably adept at turning out old classics with real savoir-faire. Witness his roast chicken, which is a work of art. Gaertner is also one of the rare (though increasingly more frequent) chefs to have turned his back on the foodie rat-race and star-life. In 2005, Gaertner handed back his Michelin star. In fact, Aux Armes de France, founded by Martin Gaertner and his wife Marguerite Simonis in 1920, was awarded its first Michelin star in 1933, the first year the mythical red guide was launched. Their son, Pierre, and his wife Antoinette, followed up with a second star in 1953. However, Philippe’s heart wasn’t in that game anymore, and together with his family, decided to live a simpler life and cook the things he enjoys - flavorful concoctions that have numerous diehard fans; stars be damned. 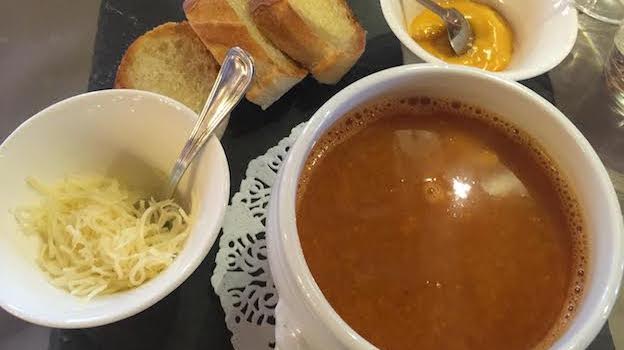 My latest meal at Aux Armes de France was really more of the usual, as I almost always tend to eat the same things. Thanks to Alsace’s use of ingredients such as onions, cream, bacon, puff pastry, white meats, and rich sauces, the region is a remarkably good place to verify just how well its late harvest wines (and sweet wines in general, for that matter) can match to an entire meal. While looking over the menu and wine list, I sipped on the 2014 Maison Marcel Freyburger Riesling, a simple, high acid wine made from a solid local producer that helped get the gastric juices flowing. White flowers and lime are obvious on the Riesling’s nose, but the wine is not especially fruity, and because of its high acidity, it comes across as a little lean, though it does provide a fresh kick start to the meal. 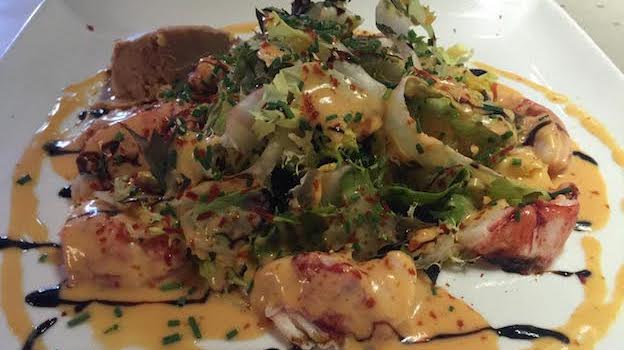 I never cease to be amazed at just how incredibly well Alsace Vendages Tardives and Séléctions de Grains Nobles match with a different array of dishes. The marvelous 1990 Domaine Weinbach Riesling Séléction de Grains Nobles is drinking beautifully now, boasting highly complex, concentrated notes of crystallized ginger, mango salad, lime blossom, white chocolate, saffron and minerals. Less sweet than when it was first released, it cuts through the high acidity of the tomato tart, but the inherent sweetness of the tomatoes helps this food and wine combination not be the mismatch one might have thought. Even better is the match with the garlic- and saffron-accented fisherman’s soup that helps bring out some of the herbal and sweet spice elements present in the rich, suave, honeyed Riesling SGN. Clearly, as Riesling SGNs and foie gras are a match made in heaven (and in that realm, lobster isn’t far behind), the wine performs admirably with the salad (though too generous a touch of vinegar makes things more difficult than expected); and it does even better with the rich, thick vinegar-laced brown sauce and the chicken, where the wine’s rich texture meshes seamlessly with that of the juicy, sultry bird. 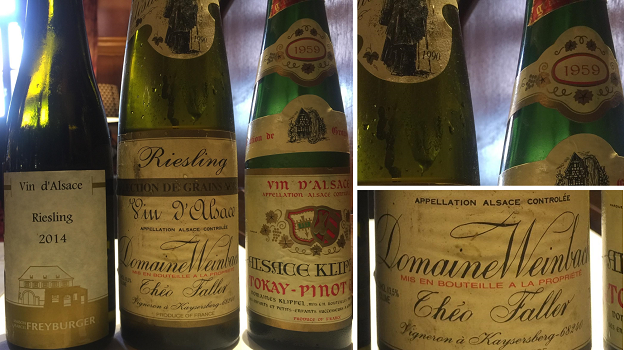 I finish the meal off with two wonderful desserts and then, on its own, an oldie but a goodie: the 1959 Domaines Klipfel Tokay-Pinot Gris Séléction de Grains Nobles was never a monster of concetration or complexity, but it has aged gracefully, showing just how well a low acid variety such as Pinot Gris can stand the test of time (clearly the healthy dose of noble rot doesn’t hurt, as it concentrates not just the sugars but the acids as well). Amber-gold in color, with heady aromas and flavors of chestnut honey, baked cinnamon apples and toffee, the wine is still remarkably fresh, although it is clearly neither as good nor as lively as it was a few years ago. Any bottles you may have lying around in the cellar are best drunk up.

After this fabulous lunch, I walked out of Aux Armes de France and took the afternoon to enjoy a long happy stroll poking around Ammerschwihr.