Dinner at Blue Hill is an experience. The focus is on sustainable food grown on the property and other nearby farms. Guests are presented with four menu choices, which are essentially the number of courses; 4, 5, 8 or 12. That’s it. The food then begins to emerge from the kitchen in multiple morsels of pure delight. Almost all of the courses are quite small, so it is never very clear where the amuse-bouches end and the actual menu starts. Suffice it to say you should not be in a rush if you go to dinner at Blue Hill. The menu changes daily, so trying to recommend one or more dishes is a futile exercise. Eating at Blue Hill is an experience best approached with an open mind and palate. 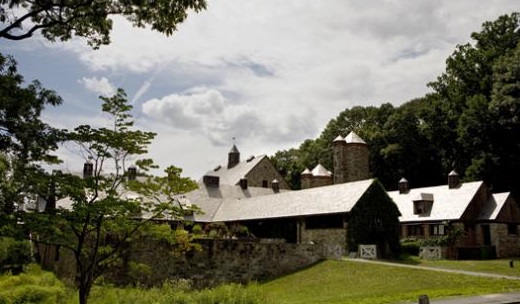 Wine Director Thomas Carter oversees one of the best and most interesting lists in the greater New York City area. In practically every major region, Carter features hard to find artisan growers of the highest level. Maybe it’s a question of compatibility, but for just about every region, these are precisely the types of wines I want to drink, especially with this food. Champagne, Burgundy and German Riesling are among the strengths. A handful of carefully chosen aged Riojas that are rarely seen these days will reward those who take the time to go over the list with care. Carter also offers an extensive selection of artisan beers and ales. Although I am not intimately familiar with handcrafted beers, I can certainly see how they would be fabulous with the food at Blue Hill.

I never miss an opportunity to drink one of Cédric Bouchard’s wines when I see it on a wine list. I had a pretty strong suspicion the 2007 Rosé de Saignée Le Creux d’Enfer would be tightly wound, and it was, but it was still a thrilling wine to savor with our first courses. Miani’s 2009 Sauvignon Saurint seemed to fill the entire room with its extraordinary bouquet. World-class all the way, it literally burst from the glass with the most exotic, seductive Sauvignon aromas and flavors imaginable. Every year, I take my full allocation at Miani, and am rarely disappointed. On this night, the 2009 Saurint was simply stunning.

Two wines from Domaine Leroy fell short of my expectations. The 1998 Vosne-Romanée Les Beaux-Monts was quite attractive, but it was the Leroy style that came through most, rather than a true expression of Beaux-Monts, one of the great sites in Vosne-Romanée. The 2003 Chambolle-Musigny Les Fremières was enigmatic, at best. It remained heavily reduced and totally muted over the several hours we followed it.

Things took a turn for the better with a stellar bottle of Domaine Dujac’s 1980 Clos St. Denis. From one of the most overlooked vintages in Burgundy, the 1980 Clos St. Denis hovered on the palate with sweet mint, perfumed fruit and the silkiest of tannins. It was pure class, but also fully mature and at its peak of expression. The same can’t be said for the 1999 Clos de Tart, which came across tightly wound and wiry. I loved the purity of the fruit, but this is a bottle that was opened a few years earlier than would have been ideal. Readers holding the 1999 are in for a treat when the wine enters its early maturity.

Salsify with sesame and pancetta