I recently had the pleasure of attending a tasting at the Bottega del Vino organized by François Mauss of the Grand Jury Européen. After the formal tasting was concluded the group sat down to dinner in the private dining room located in the restaurant’s wine cellar, which holds an eye-popping collection of trophy wines. We tasted many wines blind during the course of the evening; the following are just a few that were especially noteworthy. 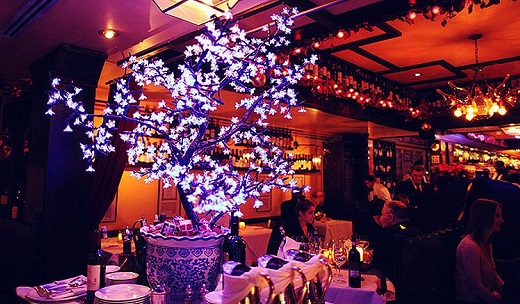 On this unseasonably warm winter evening we started with a creamy pumpkin soup accompanied by a roasted porcini mushroom served atop a crostino. A bottle of Giuseppe Mascarello’s 1990 Barolo Monprivato was a little advanced, and its more linear structure and lack of 1990 typicity in its fruit caused me to think it was the 1982, but it was immensely enjoyable nonetheless.  I finished my last taste just as the risotto with truffles was being brought to the table and the heady combination of the Monprivato aromatics and freshly shaved white truffles was enough to send many of us in the room into a state resembling ecstasy.

Unfortunately a bottle of the 1987 Giacosa Barbaresco Santo Stefano I brought did not enjoy a strong showing, most likely damaged by heat at some point during its life. Well-stored bottles of this wine are fully mature, yet fresh, and a pure joy to drink now. Kudos to François Mauss for guessing this was a Giacosa despite its being far from representative. We had much better luck with our next wine, a stunning bottle of Giacosa’s 1982 Barolo Rocche di Castiglione. It showed the classic Rocche notes of flowers, roses, spices and red fruits on a linear, nervous frame typical of the vintage, with exceptional length, fine tannins and gorgeous overall balance. It was my favorite wine on this night and it was a treat to taste this Barolo from a pristine bottle. The chef ventured out of the kitchen to check in on us, generously offering second portions of truffles for our risotto. We did a good job making sure he went back to the kitchen pretty much empty-handed. The flight ended with a beautiful bottle of Paolo Scavino’s 1985 Barolo Bric del Fiasc. Showing the ripeness of the vintage in its sweet fruit and aromatics, it provided much pleasure in a somewhat simple style that captures Scavino at an early point in his career before he had made his first truly great wines. Oddly, this bottle was much fresher than a magnum of the same wine tasted at the estate earlier this year, once again demonstrating how much of a factor bottle variation can be.

Our next wine was simply beautiful and appeared to be just entering the early part of its drinking window. Owner Severino Barzan and one of his sommeliers both correctly guessed a Sangiovese and Cabernet blend, and sure enough, it turned out to be a very pretty bottle of the 1997 Antinori Tignanello, a wine that impressed for its sensual appeal and fine overall balance. Antinori’s 1997 Guado al Tasso provided an interesting contrast. Noticeably darker in color, its balance was dominated by a sheen of new oak. It showed a pretty core of vibrant ripe dark fruit with perhaps a little less overall elegance.

Two 1999 Brunellos were a terrific match to our tasty lamb tenderloin. I was happy that a bottle of Soldera’s 1999 Brunello di Montalcino which I brought showed well as I have had very mixed experiences with this wine. This bottle was gorgeous and offered a tightly wound core of fruit on a structured frame, in a powerful, authoritative style that appealed to most, but not all, tasters. Siro Pacenti’s 1999 Brunello di Montalcino was another of the evening’s successes. It is one of the most unevolved 1999 Brunellos I have tasted recently. It presented a deep, dark color and as well as a backward, reticent personality, suggesting that it is in need of at least another few years of cellaring. Impressive for its outstanding overall balance, it provided much pleasure and is clearly is a special wine in the making.