Oven-cooked grouse in a ginger, vinegar and oyster sauce

The setting for Grouse Club changes each year. So long as grouse is on the menu, chaperoned by the finest wines known to humankind, we like to keep things fresh and change the setting. In 2021, this was not easy because of strict social distancing rules during the pandemic. We tried to book a new restaurant called 10 Downing Street, where, rumor had it, you could still enjoy a good old knees-up, and they operated a relaxed BYO policy: just turn up with a suitcase full of booze. Unfortunately, they were already fully booked.

So we hit upon the crazy idea of taking our beloved gamebird to a Chinese restaurant. In theory, it shouldn’t work, but there was no harm in trying. However, sourcing grouse proved to be fiendishly difficult. Come the Glorious Twelfth, and downbeat gamekeepers reported a miserable breeding season caused by a hard frost during egg-laying and inclement weather so poor during hatching that it decimated entire broods. The latest edition of Grouse Club was in jeopardy, just like everything else in the world. Fortunately, Brett Graham came to our rescue and delivered a batch of precious birds. (As an aside, yes, The Ledbury is due to reopen, but with a different twist, so stay tuned.) 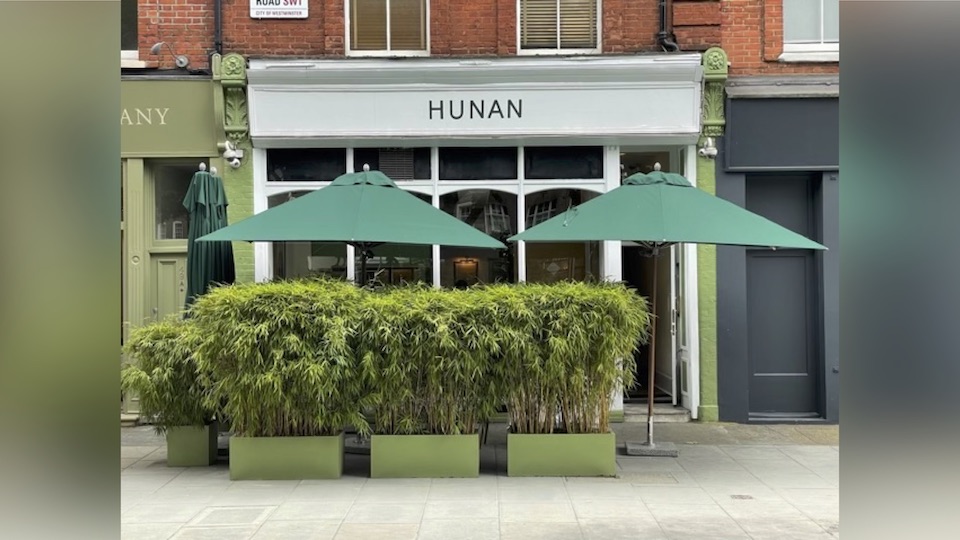 I had heard a lot about the Chinese restaurant Hunan, located a hop, skip and a jump from Sloane Square and Victoria Station. Established in 1982 by Mr. Y.S. Peng, it has outlived most restaurants and become an institution to those in the know. Since its earliest days, there has been no menu. Instead, you take a seat, inform the waiter of any preferences or allergies, and then wait for a series of tapas-sized courses to exit the basement kitchen according to what is cooking. A second reason why we chose Hunan is that atypically for a London Chinese restaurant, it has an excellent, well-priced wine list studded with a few rarely seen mature vintages.

Hunan is not the place to come for a glitzy night out. The façade is small and modest, and the interior is not unlike your local Chinese restaurant, with little in the way of fancy decor. I’m not saying it’s shabby, but it doesn’t care that its shirt isn’t tucked in. If you seek something more chichi, then go to A. Wong or Hutong. What Hunan does offer is decent value for money. A multi-course lunch will set you back £55.00 per person and dinner £85.00, but there is zero chance of departing with an empty belly.

As it happened, I visited Hunan twice within a month, completely by chance; the first time was with my better half, just after lockdown, not realizing that it was the venue for Grouse Club. The menus overlapped, though on the second visit, chef Michael Peng rustled up special dishes in addition to the grouse. Naming the restaurant “Hunan” is slightly misleading. The menu is based on provincial Hunan cuisine, which tends to be spicier than others, with more liberal use of fresh chilli, chilli oil and vinegars, though there was nothing outrageously hot. However, the dishes are actually inspired by Peng’s Taiwanese mentor, so the food is really a marriage of Hunan and Taiwanese dishes. I lack the experience to distinguish between the two, and frankly, it didn’t matter on this occasion. Just like my review for A. Wong, detailing the cavalcade of dishes feels futile, and photos seem to translate the restaurant experience more articulately than words. So here is a selection of memorable highlights. 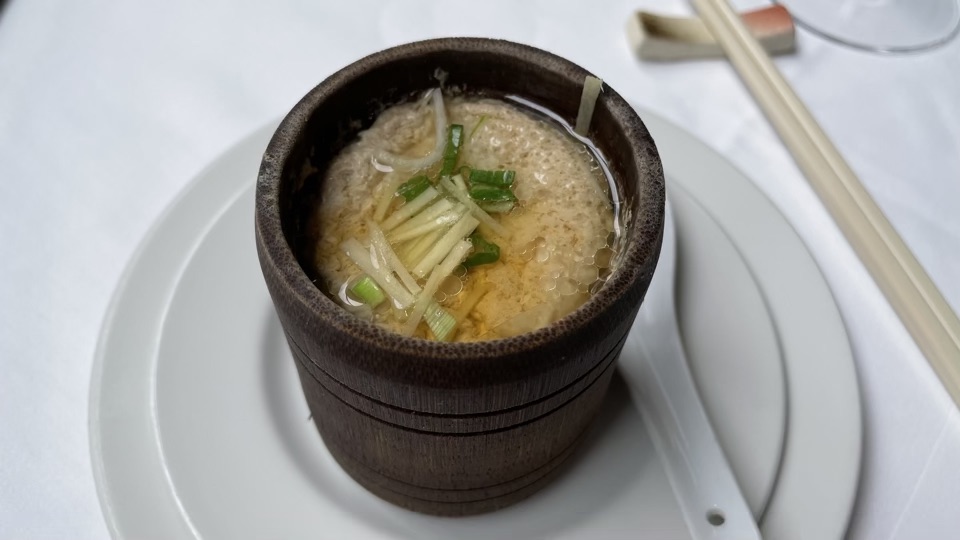 The green beans were served in a light tempura-like batter with obligatory red chilli. 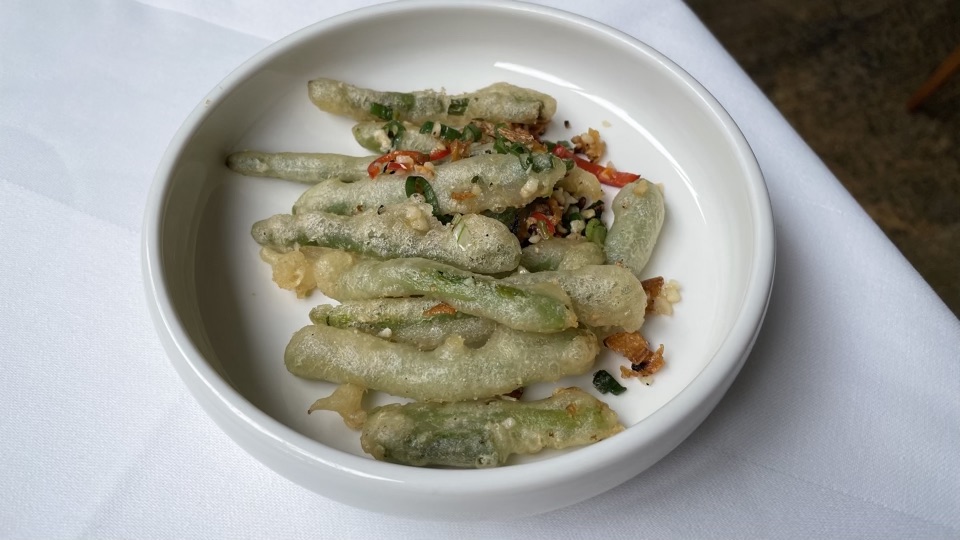 Some of Hunan’s best dishes are the simplest, like the perfectly cooked and seasoned clams and the flavor-packed tomato consommé.

The pig’s ears were wrapped in tongue with jellyfish. They were a little chewy, but the flavor combination worked a treat. 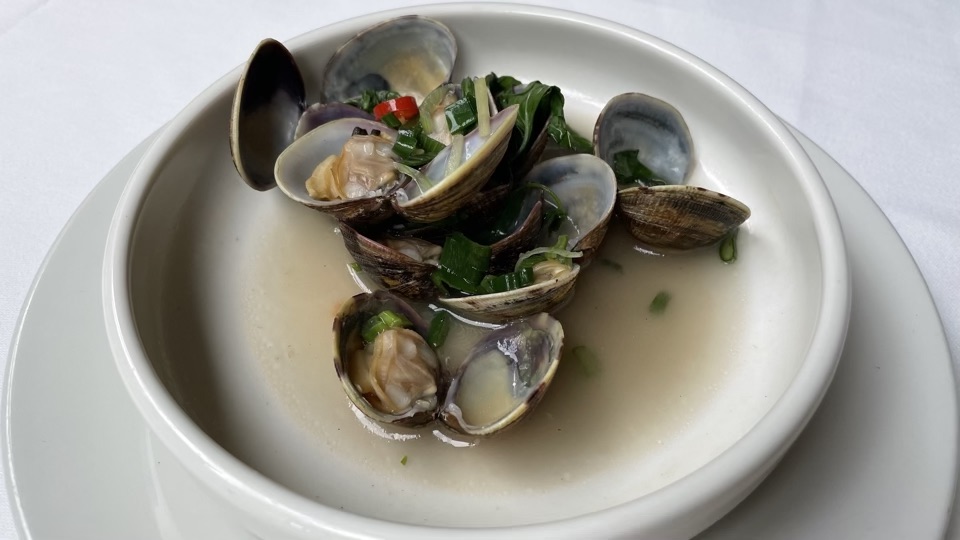 The battered Dover sole garnished with coriander and red chilli was, again, straightforward yet exquisitely cooked.

When it came to the grouse, Michael Peng had apparently never cooked this gamebird. Cue some frantic Googling the night before! He did a great job, keeping it simple and oven-cooking the bird for 30 minutes, seasoning it sparingly with salt and pepper, and serving it with a ginger, vinegar and oyster sauce plus a dash of red chilli. Did it work? I’m not sure. It was one of those occasions where maybe the ingredients canceled each other out, the gaminess getting a little lost under the spiciness. But hey, rather than talking about it, we actually did it, and that’s what life is about. 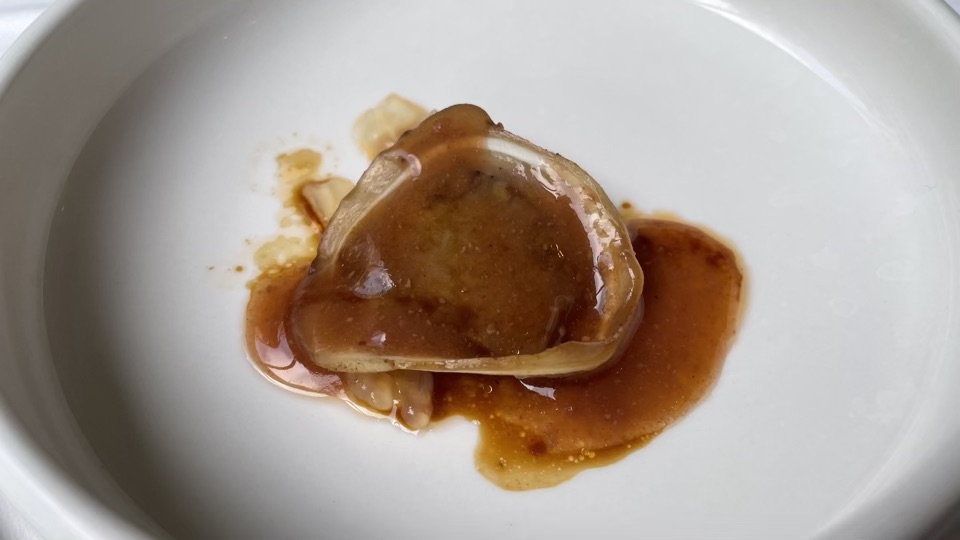 I can understand why readers might look at all those red chillies and conclude that we were insane to drink fine wines with this meal. However, the cooking and seasoning were measured and combined beautifully. Peng let the spiciness simmer in the background, never dominating the gustatory experience.

On my first visit with my wife, I was taking it easy, and we shared a bottle of 2019 Saint-Aubin Les Corton 1er Cru from Domaine Larue. This is absolutely delicious, offering perfumed and detailed scents of lemon thyme, chamomile and crushed rock. Blind, you might err toward Puligny rather than Saint-Aubin. The palate demonstrates assiduous oak integration, and a fine bead of acidity lends tension to a harmonious white Burgundy of considerable weight. Light squeezed lime and almond notes appear on the finish. This is a splendid Saint-Aubin from Larue. 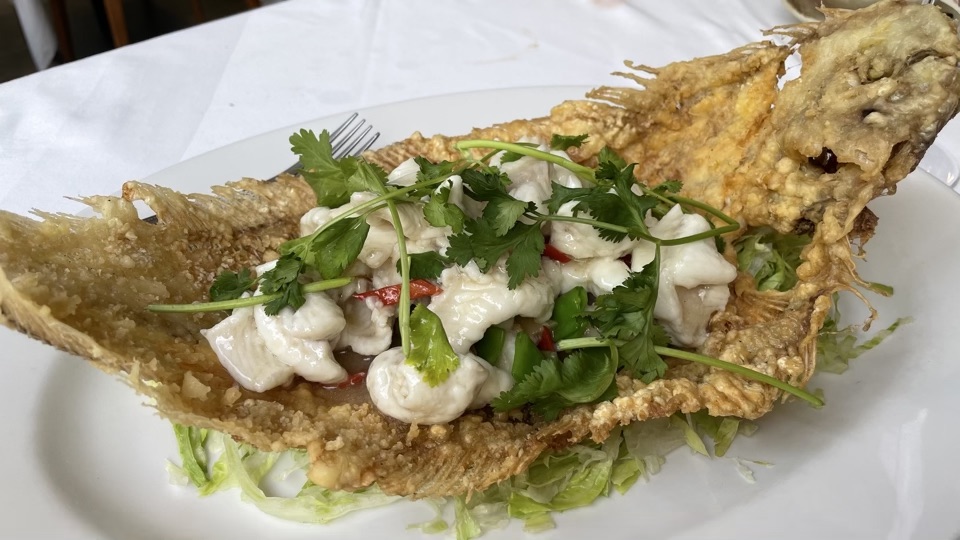 On my second visit, for Grouse Club, we arranged to bring our own bottles, but as courtesy dictates, we ordered a 2002 Niederhäuser Hermannshöhle Riesling Spätlese from Hermann Dönnhoff from the list. A perfect choice! It races out of the blocks with tightly controlled scents of nectarine, jasmine and slithers of white peach interlaced with very light petrol-like aromas. The palate is perfectly balanced thanks to its spine of acidity, crushed stones intermingling with yellow plum, clementine and very subtle rosewater notes. Somehow it delivers a sense of maturity while paradoxically feeling spritely and youthfully zesty. Brilliant. I proffered a bottle of 2011 Figeac and feared it would be too young, but it was just on the right side of drinkability. Featuring intense black fruit on the nose, with black truffle and pencil lead notes and hints of incense, this Saint-Émilion blossoms in the glass. The palate is beautifully defined with impressive concentration, fine acidity and perhaps just a light patina of new oak on the finish that needs a couple more years to fully assimilate. Should I have waited longer to bring this bottle? Maybe, but I did not feel remotely guilty. 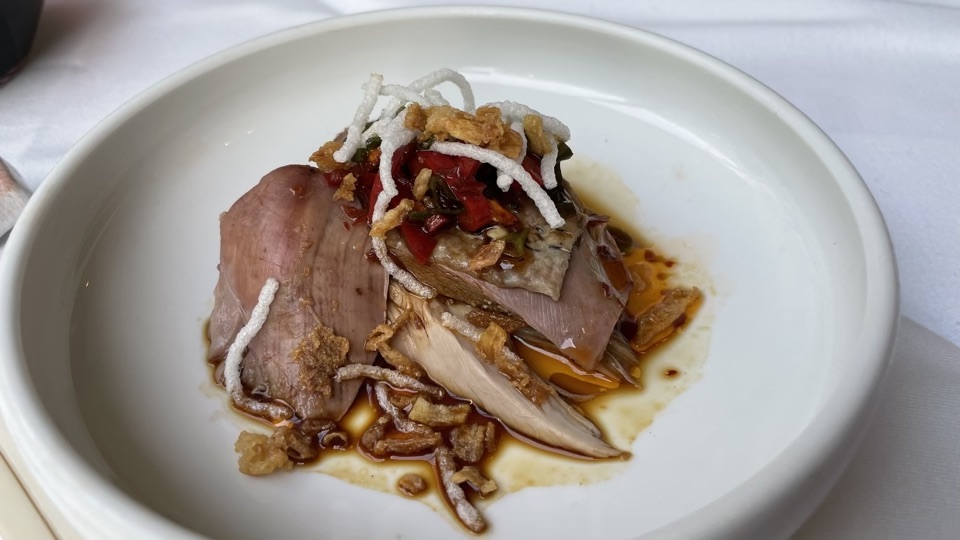 Oven-cooked grouse in a ginger, vinegar and oyster sauce .

Three fabulous Pomerols were in the starting blocks. We kicked off with a 2001 Certan-de-May, which showed a very slight cork taint. That’s life; take the hit and move on. Next up, the underrated 1981 La Conseillante, which I had not tasted for quite some time. Ugh… was that a bit of TCA? Again? We prayed that we were mistaken, but no, the taint worsened. Still, at least we had one of the greatest Pomerols of the early 1970s lined up. I crossed my fingers, because I’ve encountered more than my fair share of corked bottles of the 1971 Trotanoy, but punishment had already been meted out with the previous pair, so the laws of probability meant that… Oh, FFS. A third consecutive corked bottle, immediately obvious this time. One case of TCA is unfortunate. Two indicates some heinous crime in a previous life. Three, to quote the brothers Gibb, is a tragedy. 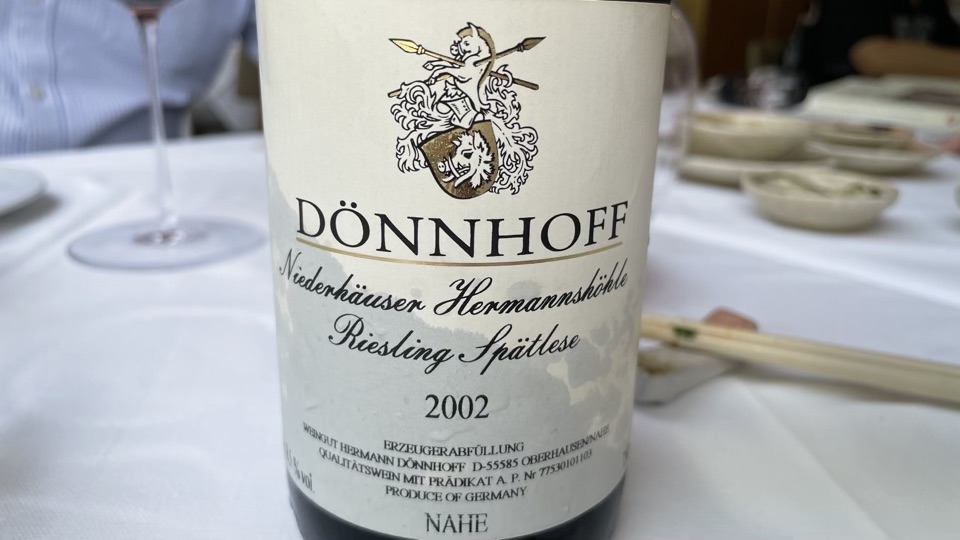 To rub salt into our wounds, our backup bottle was a 70-year-old claret from one of the most derided postwar vintages. It was born in a season so wet that on August 4, the Tastet-Lawton archives described the weather as “more like autumn.” Come harvest in early October, châteaux basically salvaged whatever they could, many opting not to release any Grand Cru. But never, ever underestimate the one estate that can make a silk purse out of a sow’s ear, especially when the bottle has spent many years in a perfect cellar. The 1951 Latour shows bricking commensurate with its age and does not possess a powerful nose, but my immediate reaction was one of complete surprise, perhaps even astonishment. Maybe there’s a scintilla of greenness, but far less than expected, and who cares when it offers so much lovely tobacco and red plum laced with tobacco and cedar? Surely the palate would be more representative of an appalling growing season. No – not at all. There was dark berry fruit laced with sous-bois and tobacco, touches of soy surfacing with aeration. I was gobsmacked by the almost velvety texture, not unlike, say, a 1959. It just goes to show that you should never write off any bottle, irrespective of vintage reputation. 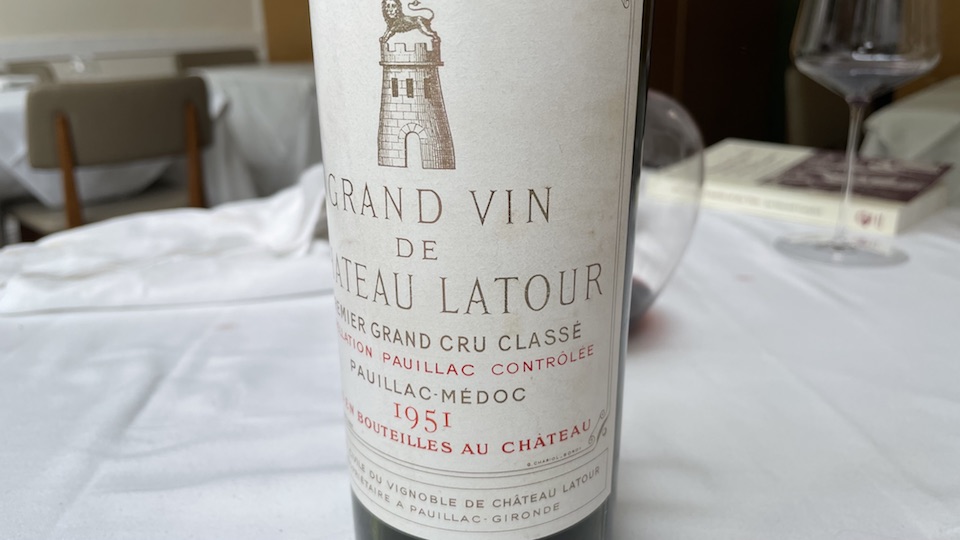 That bottled completed the 2021 edition of Grouse Club. As usual, we finished with a good old natter. Who knows where the 2022 lunch will take place, or which cuisine will grace our beloved grouse? One thing is for sure: I doubt we’ll surpass a turn-up for the books like that 1951 Latour.