Anyone fortunate enough to have traveled through the wine regions of Austria is familiar with the concept of a Heuriger. They are - generally speaking - seasonal restaurants, often appended to a winery, and many are only open for the few weeks or months surrounding harvest. The fare tends to lean in a rustic, hearty direction- typically centered around sausages or schnitzel- intended to sate the massive hunger garnered by a long day of working in either cellar or vineyard. Local wines are the only libation on offer, and a vintage will sometimes be served after only a few weeks of age (heurig effectively translates to "this year's").

Living in California wine country, I've often wished longingly for Heurigen, imagining they would provide the perfect tonic to the hustle of harvest; a convivial place for people to gather and discuss the heights or heartbreak of a given vintage. But California laws strictly forbid such a close association between a winery and a restaurant, so my Heurigen dreams have been confined to fantasy. Until a few weeks ago, that is. On a recent trip to the Finger Lakes, I was elated to hear about Dano's- self-described as America's first Heuriger- on the banks of Seneca Lake. And given the Bavarian leanings of the local wines, the resulting restaurant was far more successful than my California reverie ever would have been. 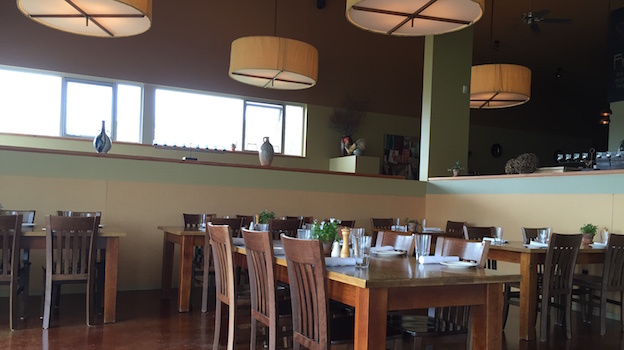 Dano's Heuriger on Seneca was co-founded by chef Dano Hutnik and pastry chef Karen Gilman in 2005. It is located on the southeast side of Lake Seneca, in what is effectively the heart of the Finger Lakes. This particular area is known as the "banana belt", as it boasts a subtly warmer climate than the rest of the oft-forbidding region. For this reason, the wineries and vineyards are fairly densely packed, making it the ideal location for such a restaurant.

I happened to stop by Dano's for lunch on my way out of town. Storm clouds were gathering on the horizon and the first fat drops had already started to fall. Stepping inside, I entered a large space that was simultaneously cozy and spare. The décor was simple but the color palate and the use of wood furniture gave off a gentle warmth. A tiled patio adjoined the dining room and beckoned with its unimpeded lake views, but the increasingly angry sky kept me sheltered inside. 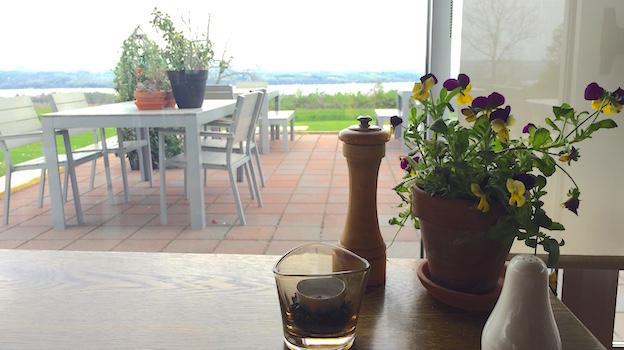 The menu is truly Austrian in inspiration, offering a range of classic regional dishes, many of which are on view in the display case by the kitchen. I was tempted to order the wiener schnitzel but ultimately settled on the "Viennese Bento Box", as it allowed me to sample many of Dano's dishes at once. The centerpieces of the Bento Box were a bratwurst and a moist chunk of roasted pork shank; both were quite satisfying, especially the wurst, which was served with a tantalizing glob of spicy sweet house-made mustard. The spätzle was seriously buttery, offering a nice salty lift that paired especially well with the red cabbage salad. In fact, all of side dishes were surprisingly impressive. So often with this type of cooking, the meats are the main event and the salads a soggy afterthought. No so at Dano's- all of the vegetables were bright, fresh, perfectly cooked, and often a touch crispy. The cabbage retained some firmness to its texture, as did the potatoes, which were combined with fennel shavings to great effect. As per the cuisine, all shared a pickled quality that was admirably subtle. 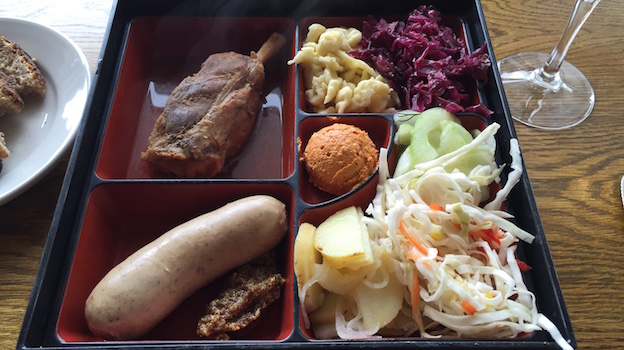 To pair with such a complex assortment of flavors I selected the 2013 Hermann J. Wiemer Dry Gewürztraminer, which performed quite well, handling both the rich meats and the pickled vegetables with equal agility. Medium in body with a soft, cushioned texture and a dense core of tropical fruit, the wine caressed the palate before coming to a fine, dry conclusion. On the nose it displayed the variety's classic scents of roses and lychee along with fresh apricot, but was happily restrained, never cloying. 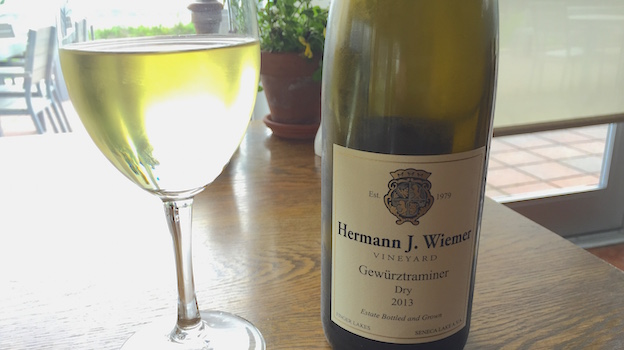 I am not a dessert eater, but I'm told the selections at Dano's are tremendous. They certainly looked that way. For me, one last dip of bread into the intensely flavorful, paprika-laced liptauer spread was my grand finale (accompanied by a final sip of Gewürztraminer, of course). Considering how far back my fantasies of an American Heuriger go, the chance for disappointment was high. Instead, I found myself completely satisfied, both physically - in that way that only a great meal can make you feel - and mentally, in that my suspicion that an American Heuriger would be brilliant was utterly confirmed.