Antica Corona Reale, a two Michelin star stop, is one of the favorite local restaurants of many Barolo and Barbaresco producers, especially when they don’t want to eat in the immediate vicinity of their estates. About a twenty minute drive from Barolo (provided you know how to get there or have a GPS system in the car, otherwise it’s not easy: prepare ahead), Antica Corona Reale is most likeable because of its lovely garden setting, especially romantic in late summer or autumn evenings. Service is professional, rapid and friendly (which is a lot more than I can say for some other famous and much-ballyhooed local dining establishments), and both the food and wine list are commendable, but with caveats. 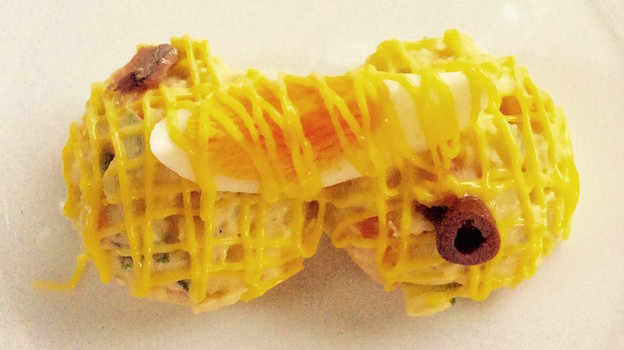 I started my meal with a generous helping of Insalata Russa, a fantastic if admittedly not exceptionally healthy Piedmontese appetizer. It is one of my favorite dishes in the world, perhaps because it always opens the floodgates of childhood memories. In fact, I grew up eating Insalata Russa, a dish that is extremely popular all over Italy, but is especially linked to Piedmont. The dish’s origins are shrouded in mystery. The most common hypothesis is that it was invented around 1860 by Lucien Oliver, a French chef of Belgian origin who worked the stoves at the prestigious Hermitage restaurant in Moscow (apparently, banquets were held there regularly, for example celebrating Čajkovskij’s birthday or honouring Dostoevskij until its closure in 1917, the start of the Russian revolution. Trouble is, the recipe Oliver was known for differs wildly from the modern day Italian version, which consists only of cooked and raw vegetables (potatoes, carrots, peas, pickles and mayonnaise –a modern day replacement for cream, the white color of each meant to bring to mind Russia’s abundant snow- eggs, olive oil, white wine or apple vinegar), but without any of the cold beef, tongue, sausage, truffle and perhaps even lobster that were typical of Oliver’s rendition. It’s really not clear which version is the original one, but it’s noteworthy that Insalata Russa is so entrenched in Piedmontese culture and tradition that over in France it is called “Salade Piémontaise” (but with yet another twist in the ingredient list, as tomatoes are also added). Antica Corona Reale’s Insalata Russa is very Italian, if not especially on the light side. In fact, a certain heavy handedness is typical of much of the cuisine here, one of the caveats I alluded to above. 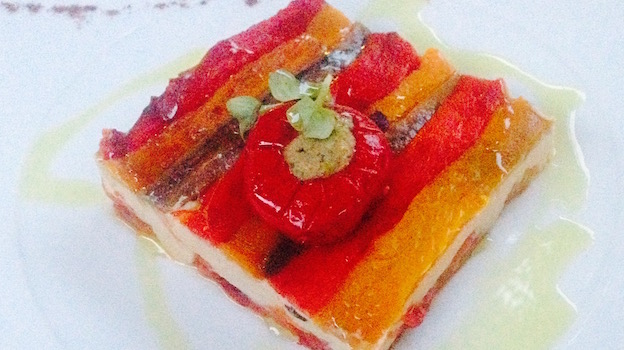 The bell pepper millefeuille is very pretty to look at; but while intense and flavorful, it rapidly induces palate fatigue due to a lack of acidic lift. Similarly, the ravioli al gorgonzola are sublime, but also thick, rich and heavy. Although I understand the dish is a classic of the restaurant, I found it on the menu also in the dead of summer (during another one of my visits to the restaurant). As good as this dish is (and it is) I just wonder if the at times stifling Piedmont heat might make people wish and look for slightly lighter dishes. By contrast, there were no such problems with the wonderful tortellini al Seirass (it’s worth driving miles to Antica Corona Reale just for this one dish!), that were actually very light and delicate: so good in fact that I could easily have had a second, and third, portion. Instead, I followed with a perfectly cooked dish of snails that are especially worth a try, since nearby Cherasco is rightly famous as a hot spot for the critters. The dentix preparation was precise and fresh, though I am not personally a fan of any dish that mixes red, blue, or blackberries with fish. 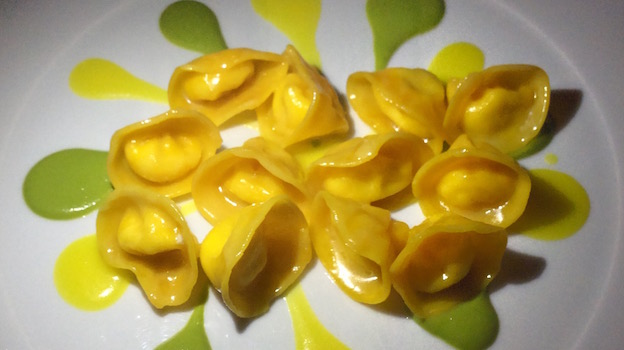 The wine list at Antica Corona Reale features many interesting choices, though it’s not especially deep in older vintages, a common problem of high level Italian restaurants, but keep in mind that Italians like to drink their whites and even reds on the young side. On a recent visit, a particularly hot day in which I had tasted over 100 different Barolos, I opted for a fish-only menu and to forgo red wines altogether. And so I kicked things off with the lovely and refreshing 2004 Pol Roger, which has sneaky concentration and could easily have accompanied the first part of my meal. Following that, I couldn’t resist trying the lovely 2013 G.D. Vajra Riesling Petracine, which is deep and lemony, and with a strong diesel fuel note on the long finish. This Riesling is one of the best four or five made in Italy. Aldo Vajra has been working with the variety for years and really turned things around when he started blending the juice from German clones along with that of the Alsatian ones he had planted at the outset. Today, his Petracine is light and lively, but offers good palate texture and plenty of fresh citrusy fruit and minerals. Last but not least, the 2011 Domaine Leflaive Meursault Sous le Dos d’Ane 1er Cru proved a perfect match for both fish and snails. The Sous le Dos d’Ane (the name in English translates to ‘donkey’s back’, in reference to the vineyard’s undulating topography) is a lesser known, perhaps slightly underrated premier cru in Mersault characterized by clay-calcareous soil and from where, on a clear day, you can see the Mont Blanc in the distance. Leflaive’s vines were planted in 1995 and 2004; the wine is aged in 22% new oak and handles its light oaking beautifully. 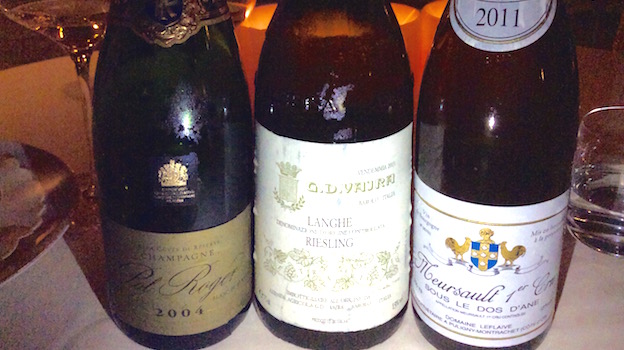 I have been now countless times to Antica Corona Reale, and enjoy its pretty setting and the knowledgeable and polite service. Undoubtedly, there are worse ways to unwind after a long day of tastings.