It was a fall evening in Amsterdam. We had spent the morning at the Rijksmuseum and the afternoon seeing the sights, so had worked up a healthy appetite.

We had reserved a few weeks in advance at Restaurant Adam, which opened in February of 2015 but had already made it to the top of most foodie lists. It’s a welcoming and unpretentious space, warmed by wood and exposed brick, with a tiny bar, an open kitchen and two small rooms seating around 35 all told. The tables were filled by 8:00, which seems to be peak dining hour in a fairly early-dining city. The food at Adam is moderately pricey, but the place seems to have found a following among residents of the decidedly un-touristy district of “Oud-West,” a primarily residential and diverse neighborhood intersected by the large commercial thoroughfare known as the Overtoom, which also lends its name to the area. Our fellow diners were for the most part local, including a few casually dressed regulars celebrating a quiet birthday and young couples stopping by for drinks and oysters. 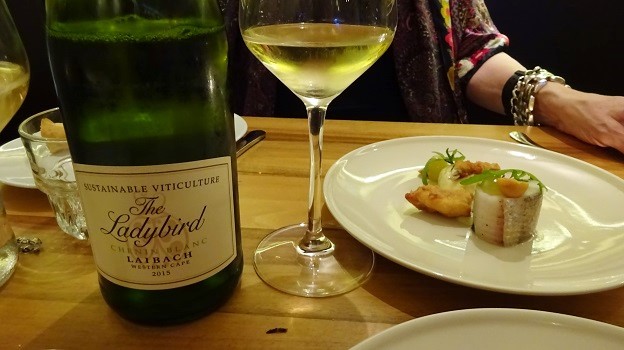 We started off with an appetizer of basil-inflected pike-perch tucked around a mousse of smoked onion and garnished with wasabi mayonnaise, macadamia nuts and white grapes. The filet’s silky texture worked in counterpoint with a ficelle of crispy fried squid. Our wine, suggested by the house, was the bone-dry 2015 Laibach Chenin Blanc The Ladybird South Africa’s Stellenbosch. The slightly pétillant grapefruit pith and crushed-stone flavors sliced through the textural richness of the fish.

Johan, our estimable waiter and translator, asked if we wanted to try some local oysters. Of course we did. He brought out amazingly plump, briny suckers called Zeeuwse Creuses No. 3 from the Zeeland region of the Netherlands. With its Sauvignon Blanc-like cut and strong saline character, the Laibach Chenin Blanc was again a great complement. 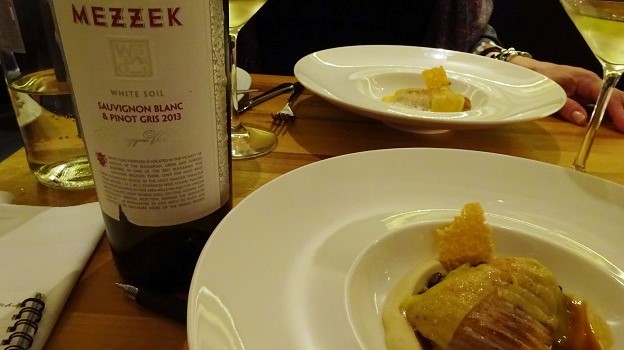 The next fish course on the menu promised such an over-the-top preparation that we decided just to ride with it and, at Johan’s suggestion, step up to a somewhat richer white wine. Skate wing fillet with lentils was blanketed with a creamy emulsion of celeriac, veal stock and beurre blanc, and encircled with a ribbon of Olde Remeker cow cheese. It was served with the equally fulsome 2013 Mezzek Sauvignon Blanc & Pinot Gris White Soil. The wine, from the Thracian Valley of Bulgaria, presented subtle aromas of soft citrus fruits, white flowers and tarragon, and its slightly glyceral, sake-like texture matched fat with fat. But it also had the saltiness and grip to buffer the butter and cheese. About that cheese: Remeker is an old-fashioned style of Gouda, but it is as far from most Goudas encountered in the U.S. as Epoisse is from Kraft slices. It is earthy and mushroomy and triple-creamy and effulgent. No fillet of skate should be served without it. 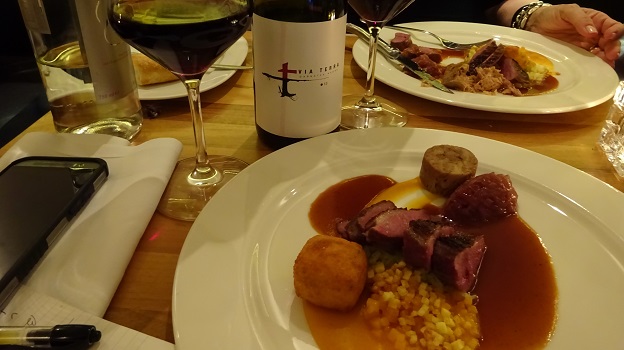 French Barbary duck breast came with a compote of pumpkin and red onion, potato rösti, confit of duck leg, diced cabbage, and Vadouvan cracklings. Each component of the dish represented comfort food at its most sophisticated, the whole so seductively scented—Vadouvan being a French version of masala spices—that my companion was compelled to lunge for it before I had a chance to snap the picture. The 2013 Bodegas Edetaria Garnatxa Negra Via Terra, from the Terra Alta region in Spain’s Catalonia, offered silky red fruit flavors but also peppery spices and herbs and shockingly good acidity to stimulate the palate between tastes of mellow cabbage and confit.

Dessert was the kitchen’s take on “Pêche Melba,” in this case featuring poached pears, vanilla ice cream and raspberry coulis, punctuated by fresh raspberries stuffed with white chocolate. The dish was paired with a Piero Gatti’s 2014 Moscato d’Asti—thick and sweet but very fresh, with clean flavors of peach, orange blossom and ginger that had the effect of leavening the dessert’s sugary aspect. 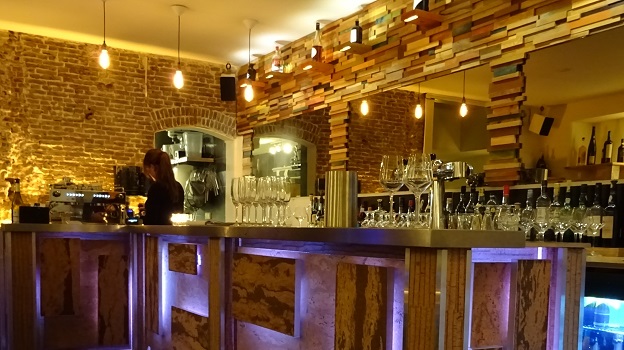 The bar at Restaurant Adam

If you go, and you should, by all means opt for the house wine recommendations, which, like the menu selections, are at once off-beat, thoughtful, and hugely satisfying.