Every once in a while, you luck into a restaurant that turns out to be far better than expected and leaves you feeling good all over, thanks to more than just the outstanding company, food and wines you might have enjoyed. This is especially true of the Xin Rong Ji restaurant in Huangpu, Shanghai (there are two others that I know of in the city, in Jing’an and Huaihai Lu Nanyang Road, but it’s the first one of these that offers the best food and the most satisfying dining experience). 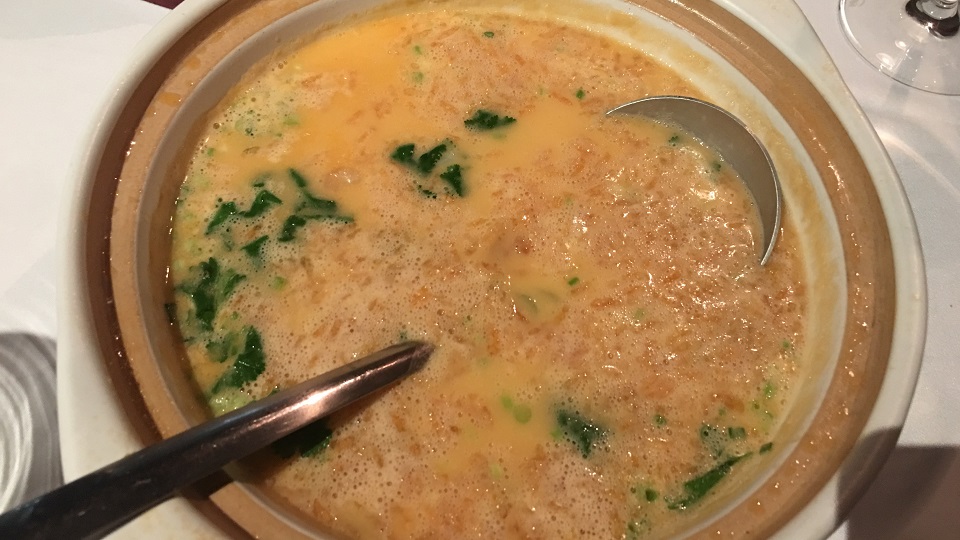 Xin Rong Ji specializes in Zhengjian and Taizhou cuisine, which are much less well known in the west than those of Sichuan and Canton, for example. Chinese cuisines can be divided into eight great types (Cantonese, Sichuan, Shandong, Fujian, Jiangsu, Zhejiang, Hunan and Shanghai) but in fact that breakdown does not include the food of culturally diverse regions such as Yunnan (which is in itself characterized by many different cuisines born of a plethora of different ingredients, traditions and ethnicities, and so can hardly be viewed as just one cuisine). 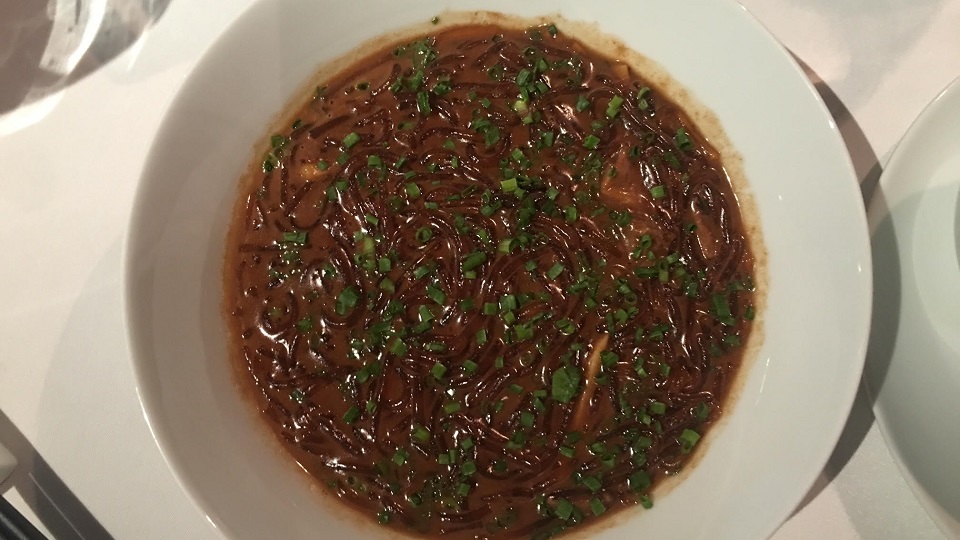 Taizhou is a city in eastern China's coastal Zhejiang province (not to be confused with Zhengjian, which is a prefecture-level city in the province of Jiangsu). It is located 300 kilometers south of Shanghai and 230 kilometers southeast of Hangzhou, the provincial capital, and is bordered by Ningbo to the north, Wenzhou to the south and Shaoxing, Jinhua, and Lishui to the west. Unlike Sichuan’s very spicy (and at times fiery-hot) cuisine, or the slightly sweet-tinged recipes of Cantonese cooking, the Zhejiang province is characterized by mostly very nuanced, delicate but flavorful fish and seafood preparations. Famous Zhejiang dishes include Hangzhou roast chicken (commonly known as beggar's chicken; legend has it the recipe was invented by a Hangzhou thief), West Lake fish in vinegar, Songsao shredded fish soup, fried shrimp with Longjing tea and Dongpo pork (named after the famed Song Dynasty poet and gastronome Su Dongpo; Hangzhou, the capital of Zhejiang, was also the capital of the Southern Song Dynasty, and the city was both sophisticated and wealthy). 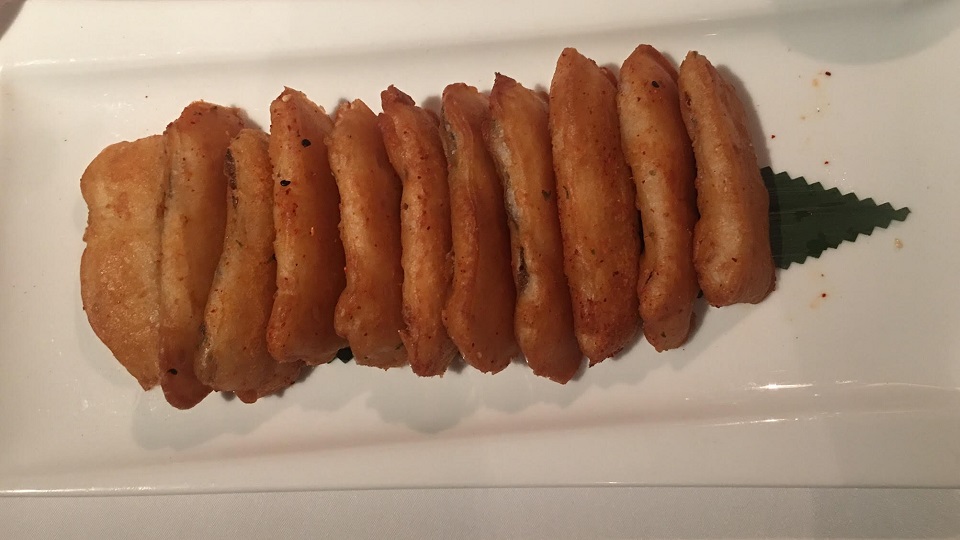 That history goes a long way in explaining the very refined and downright dainty cooking this region is justly famous for. However, much as with other Chinese cuisines, things are not so cut and dried, and there are in fact at least three recognized styles of Zhejiang Cuisine: Hangzhou (the most refined and also the most elaborate, with a preponderance of stir-fried dishes often including bamboo shoots, though it also features sautéing, deep-frying and stewing); Ningbo (known mostly for saline, almost salty-laced concoctions that are mostly the product of steaming, roasting and braising, as well as for its sweets); and Shaoxing (a more inland section of the province where thick and glutinous sauces are more common and not just freshwater fish but also poultry plays an important role in the local recipes, unlike the rest of the province, where fish and seafood dominate). 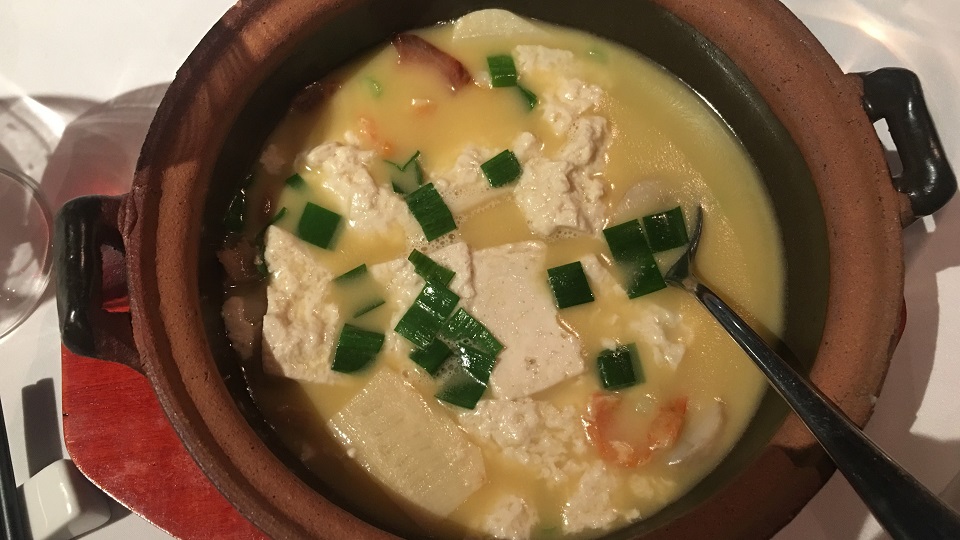 My dinner at Xin Rong Ji was simply spectacular, and even apparently simple preparations, such as the deep-fried Bombay duck fish with salt and pepper, were memorable. In fact, I doubt I have had better, tastier, not-at-all-greasy fried fish in a very, very long time. This dish really showcases the hallmark of Zhejiang’s cuisine of crisp, fresh preparations that are never over the top or heavy. But it was two other dishes that really stole the show and went straight into my pantheon of great dishes of the year. 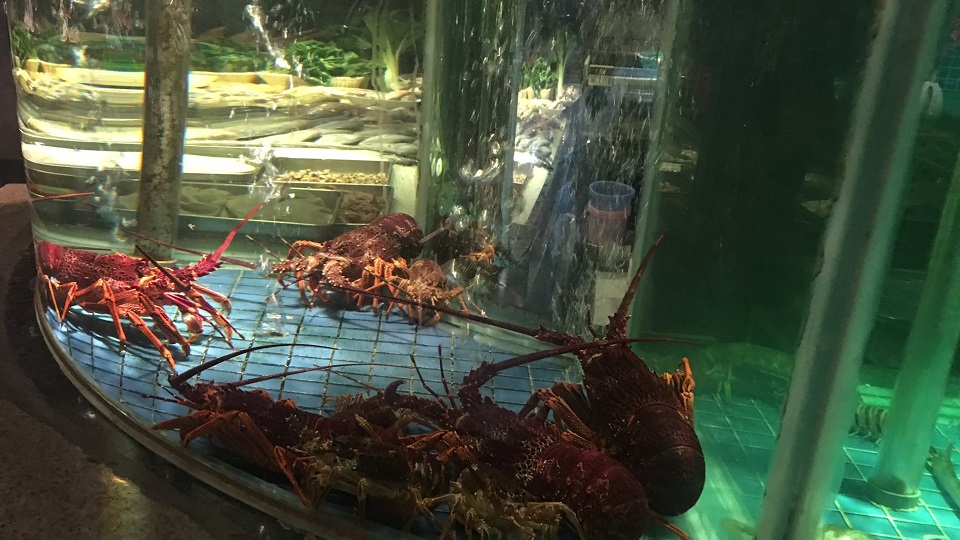 The braised sea anemone, black truffle, almond, duck and glass noodle dish is quite simply one of the most powerfully concentrated yet precise noodle dishes I have ever had in China, displaying a truly noteworthy elegant quality despite its intensity of flavor. The dark brown color derives from the braised sea anemone and the use of black truffle. I absolutely loved the perfect balance of delicately earthy and sweet-salty-sour elements. “Balanced” is also the best descriptor for the stellar rice soup in lobster stock, a delightful blend of juicy textures and lifted nuances; I could easily have had seconds, thirds and fourths of this very flavorful concoction. Last but not least, the braised farm tofu in casserole was also much more flavorful and interesting than most tofu dishes tend to be (at least for my palate, which shocks my Chinese friends – all of whom have apparently never met a dish of tofu they didn’t think was just swell and who cannot believe I could possibly utter such profanity!). 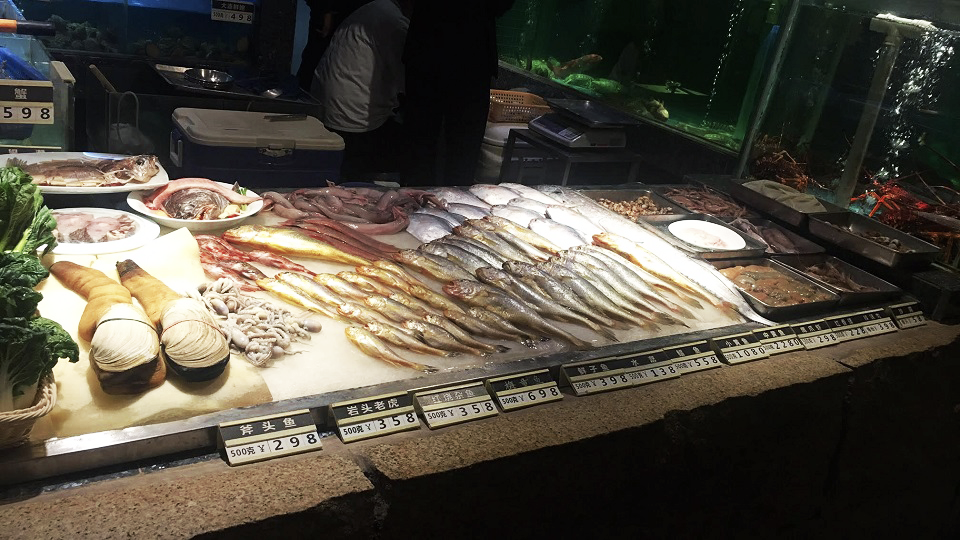 On this night, not just the food but the wines proved stellar. Except for a few momentary patches over the last few decades when wines were slightly less than they ought to have been, I have never had anything but delightful wines from the Palatinate’s storied Bassermann-Jordan estate. The Forster Jesuitengarten (for my taste, choosing between the Rieslings of Forst’s Kirchenstück and Jesuitengarten vineyards is a battle of firsts among equals) is quite simply one of my 10 favorite vineyards in the whole world, and I simply never tire of Rieslings from that hallowed piece of vineyard land. 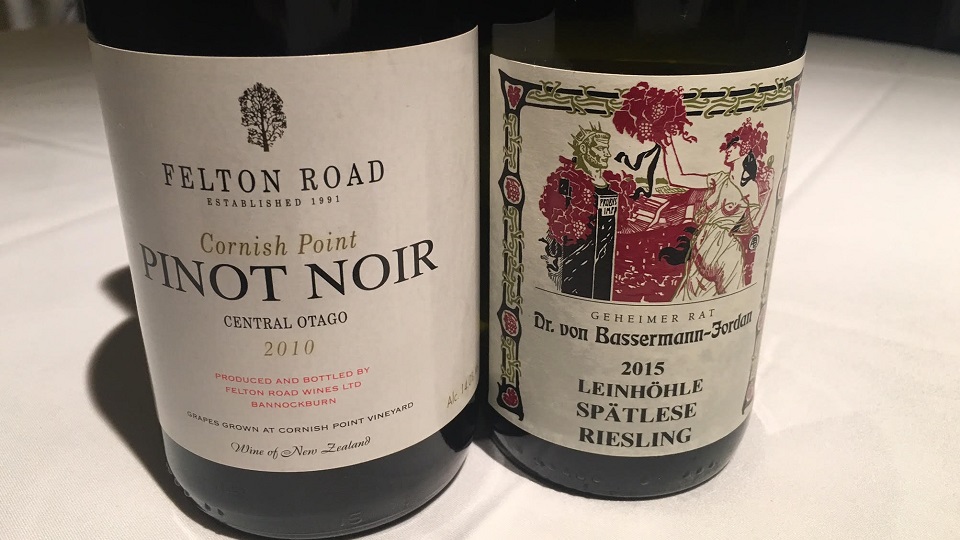 But other vineyards farmed by this estate give memorable wines, such as Deidesheim’s Leinhöhle – and the 2015 Basserman-Jordan Leinhöhle Riesling Spätlese showcases just how delightful wines from that site can be. It’s characterized by loam/sand/sandstone soils and occasional extreme heat, but the wines are nevertheless fresh and fruity, and this specific wine exudes notes of honeysuckle, candied lime and white peach in spades. I loved the clarity, cut and clean dry taste, as well as the above-average concentration (and only 9.5% alcohol). Speaking of great wine estates, I’m not sure if I’ve ever had a wine from Vincent Dauvissat that was less than wonderful, and the 2011 Vincent Dauvissat Chablis is a case in point. Beautifully lemony and fresh, delivering sneaky concentration and lingering mineral aftertaste, this was simply a superb showing for this wine, though I’ll be the first to admit it’s not the most nuanced wine Dauvissat has ever made. But its fruit-forward, textured personality (in keeping with the vintage’s characteristics) is irresistible. 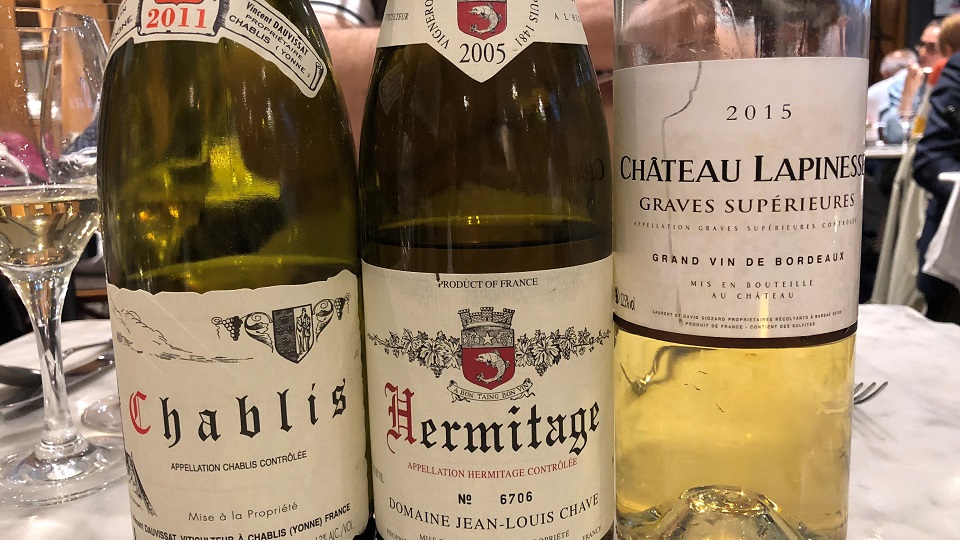 At the opposite end of the wine aroma, flavor and texture spectrum, the 2005 Jean-Louis Chave Hermitage Blanc is everything you’d expect from a great Northern Rhône white from this famous producer. Garrigue, beeswax, lemon, shiso leaf, poached apricot, pear and many other aromas and flavors wafted out of the glass. What you have to love about this wine is how the contributions of both the old-vine Roussanne and the Marsanne in the blend are clearly recognizable, and the sum is more than the individual parts. The wine overpowered some of the dishes I ate on this night but actually married better with the tofu in casserole and the slightly gelatinous rice soup than I had imagined. Pinot Noir is a red that works with many Chinese cuisines, and the beautifully fruity, flinty and gently sweet 2010 Felton Road Pinot Noir Cornish Point proved a beautiful accompaniment to the sea anemone dish. I remember that when this wine was first released, it didn’t strike me as a giant of nuance or refinement, but a little bottle age has helped temper its sweet, fleshy flavors. I closed my evening out with the little-known but lovely 2015 Château Lapinesse, a sweet Bordeaux white that is not unlike a light Sauternes, offering delicious candied citrus peel, saffron, ripe pear and peach aromas and flavors (the estate actually owns land in Barsac, too). Perfumed and lively, it kept my taste buds dancing all the way to the airport. 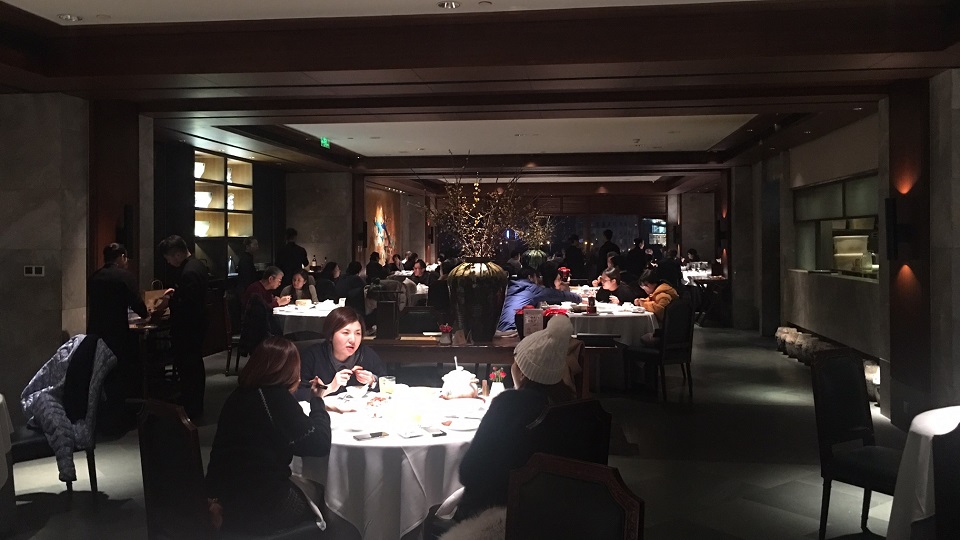 On my way to catch the plane back home to Rome, I was glad I had taken extra-special care in choosing the wines for the evening’s meal. Otherwise, there was a real risk that the excellence of the food would have absolutely creamed the wines. Happily, things worked out well on both solid and liquid ends of what proved to be a lovely evening-long dining trek through one of the many very fine culinary regions of China.