Friuli Venezia Giulia’s countryside is one of Italy’s best if least well-known dining destinations. This pretty region, tucked away in Northeast Italy, on the border with Austria and Slovenia, has a very hearty, savory and flavorful cuisine strongly marked by influences from its two bordering countries. Furthermore, Friuli Venezia Giulia boasts a long history of truly iconic and distinguished restaurants and osterie (gostilne, in Slovenian), including Boschetti (in the town of Tricesimo) and Roma (in Tolmezzo). Unfortunately neither one is still around, but both are an important part of Italian culinary history and are fondly remembered by all those who love good food and wine. Today, that tradition is being carried on by the likes of the Gostilna Devetak (soon to be reviewed in Vinous Table) and La Subida, true Italian countryside trattoria benchmarks. 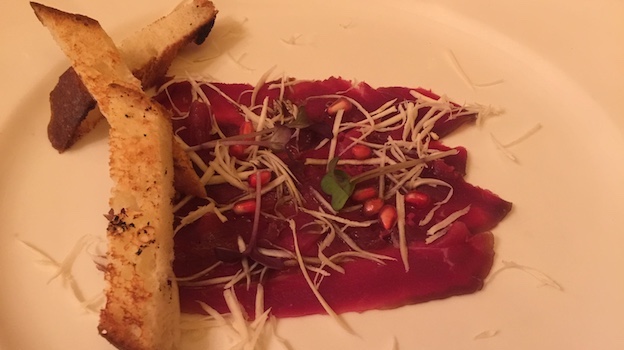 La Subida was founded in 1960 by Joško Sirk and his wife Loredana. The place has long been a magnet for sybarites, a runaway success that has grown by leaps and bounds over the years. Today the family runs not just the one Michelin star restaurant, but also a bistro and a country inn.

‘Chic rustic’ may well be the best way to describe the look and feel of La Subida, with the restaurant exuding a homey, warm feeling, no doubt reinforced by its plethora of exposed wooden beams, tiled floors and family memorabilia everywhere (including old photos, copper pans and coffee pots). The ‘all in the family’ atmosphere and feel continues right into the kitchen, as the chef, Alessandro Gavagna, married Joško and Loredana Sirk’s daughter, Tanya, and has worked at the restaurant for many years. Gavagna is an obviously talented man and his dishes, which may not be for everyone given their intensity and juxtaposition of flavors, are savory and precisely cooked, with curious mix of tradition and creative twists. 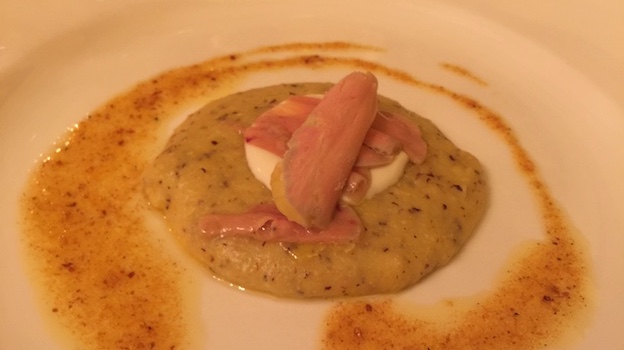 Warm soft polenta in the style of Gianni Cosetti

A big secret to La Subida’s success is the use of high quality local ingredients: the menu is a treasure trove of prime foodstuffs, a veritable who’s who of purveyors including the prosciutto, lard and guanciale from D’Osvaldo (the best at his craft in Italy), corn flour (used to make the polenta) from the well respected Mulino Tuzzi, pork meat sourced from talented Isidoro Veliscek, trout farmed by Friultrota (an extremely high quality trout farm: did you know Friuli is Italy’s biggest producer of trout and the third biggest in Europe, after Norway and Turkey?), and the list goes on and on. Clearly, great ingredients and someone who actually knows what to do with them is always a good combination, so it’s hardly a surprise La Subida often comes up aces. My most recent dinner was delicious, with dish after dish redolent in remarkably intense aromas and savory flavors. Yet despite the heartiness of the cuisine, I got up from the table feeling light, with considerable spring in my step, another good sign. 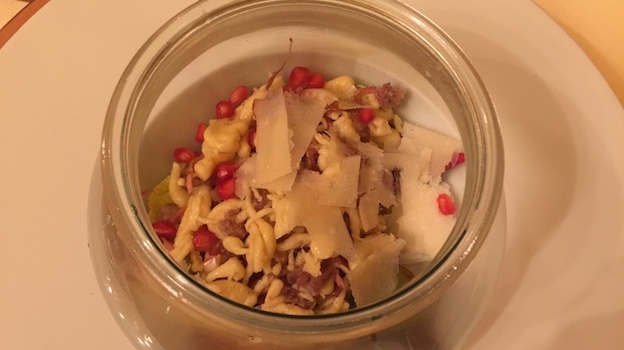 The venison carpaccio with horseradish, pumpkin oil and pomegranate is a marvelous way to start, wonderfully light yet concentrated, benefiting greatly from the fruity acid lift brought on by the pomegranate. Always one of my favorite dishes is the toc in braide, a soft polenta with melted Montasio cheese with other seasonal additions (such as a piece of torchon of foie gras in the winter or asparagus when they become available). It’s a recipe that was invented in the 1980s by Gianni Cosetti, one of Friuli Venezia Giulia’s most important chefs, owner of Roma, the restaurant that elevated the foodstuffs and recipes of the Carnia (in Friuli’s deep northeast) to an art form. The toc in braide’s role was that of an energetic pick-me-up for those people that had already been up since the wee hours of the morning working in the fields, but still had a long day’s work ahead. Clearly, those poor farmers probably didn’t have the piece of foie gras torchon to look forward to, so I’ll just count my blessings (foie gras torchon is a sibling of foie gras terrine, the main difference between the two residing mainly in their respective shape and cooking preparations; for torchon, foie gras is packed into a cylindrical shape and wrapped in a cheesecloth, then boiled in water or stock). The other noteworthy dish on this particular night is the zlikrofi, small tortelli with a chive and potato filling typical of the Val d’Idrija in Slovenia. 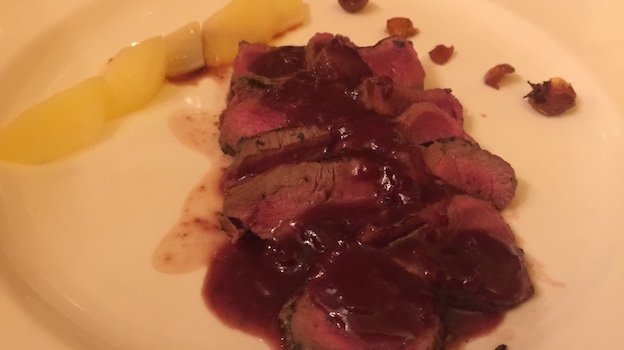 Joško and Loredana Sirk’s son, Mitja, looks after the wine list, which is large and especially rich in great Friuli Venezia Giulia wines (as it should be) though on this visit I found it had been considerably picked over and a number of vintages and wines I would have liked to try were unavailable. Still, there were many great choices to be had and I found myself thinking long and hard at just what to go with. Nevertheless, starting off with the Jacques Selosse Blanc de Noirs Grand Cru  La Côte Faron  was a no brainer. Concentrated but vibrant notes of red berries, dried flowers, sweet baking spices, and licorice are all woven into a rich, tactile mouth-feel the creaminess of which may be less appealing to those, like me, who prefer a more mineral style of Blanc de Noirs (such as another of Selosse’s Lieux Dits six different bottlings, the mineral Le Bout de Clos from Ambonnay). Still, the Côte Faron is simply exquisite and a real tour de force; it’s easily one of the three or four best non-vintage Champagnes I have had this year. I have always thought that Toros makes some of Italy’s best white wines, especially his Pinot Bianco; unfortunately, the 2014 Toros Pinot Bianco speaks of the difficult, rainy vintage. While it offers lovely balance and aromas and flavors of green apple, apricot, beeswax and jasmine, these are just a little less deep and dense than is normal for this benchmark wine, normally one of Italy’s two or three best Pinot Biancos. Kante’s 2004 Malvasia is drinking beautifully right now, with less of the earthy tones that are more noticeable in the wine’s youth. It boasts precise, perfumed notes of orange peel, minerals, and dried flowers. Another wine that is currently in a sweet spot as far as optimal drinking goes is the 2000 Miani Merlot, a wine that with time has morphed beautifully into a tactile, medium-bodied red offering soft smoky plum, blackcurrant, coffee and cocoa notes, while losing some of the leaner, high acid edges that were present in its youth. It’s clearly neither the most concentrated nor memorable Merlot you’ll taste from Miani’s Enzo Pontoni (who, ever the perfectionist, actually told me he thinks it’s the worst Merlot wine he has ever made) but I like the wine’s lovely balance and easy drinking charm. I don’t think there’s much to gain from holding on to it though, so I’d suggest drinking this up over the course of the next three to four years. 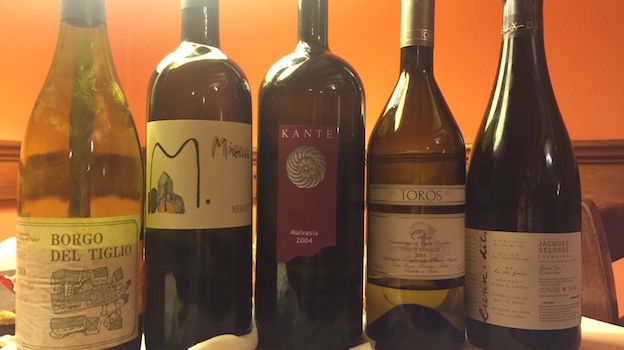 Last but not least, the 1998 Borgo del Tiglio Verduzzo is an absolutely beautiful example of what Verduzzo Friulano can be when in the hands of a talented producer such as Nicola Manferrari of Borgo del Tiglio. This lovely, delicately sweet white wine is almost weightless and still vibrant, with harmonious acidity extending the apricot, pear and acacia honey flavors on the long, precise, very clean back end. Unfortunately, in a sign of the difficulties sweet wines are encountering in today’s marketplace, Manferrari no longer makes the Verduzzo. It’s an absolute shame. This eighteen year old beauty clearly shows how the variety can give age-worthy, multifaceted wines offering numerous wine and food pairing options, ranging from outstanding aperitif to embodying the perfect close to a meal.