It has been tough. I cannot deny it. Waiting for this bloody heart bypass operation. I know, I know. There are many poor souls with far more serious ailments than me, including some of my own friends facing bleaker diagnoses. Permit me to wallow in my own self-pity for a moment. Tapping my fingers on the table waiting for an operation date that feels like it is the next century, the spells when nobody in the NHS seems to be at home, the last-minute cancellations that at time of writing could happen again... I cannot wait until it’s over and the rest of everything begins. In the meantime, I am indebted to friends who have cajoled me out of the house, kept me busy and kept life hobbling along as best it can. Hence in March I met up with a couple of pals to visit Noizé for a small but perfectly formed “keep your chin up” dinner. 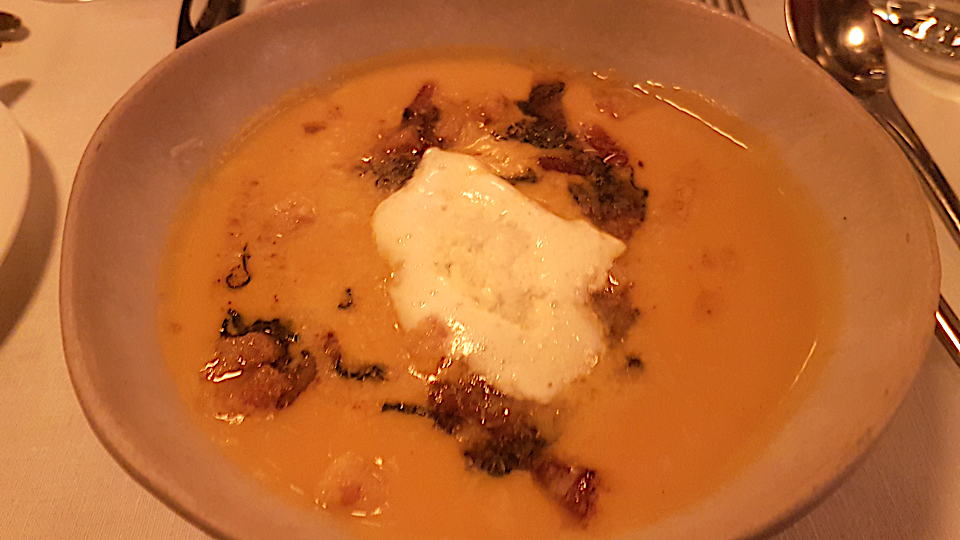 Noizé is located bang in the center of London just behind Googe Street in Fitzrovia in the corner space previously occupied by Dabbous. Former co-proprietor and manager of nearby Pied-à-Terre, Mathieu Germond, opened Noizé in 2017, named after the tiny Loire village where his grandparents owned a farm, his aim to bring a bit of rustic French flair to the capital. The restaurant consists of a main ground floor plus a spacious basement area that can cater for large dinners. Indeed, on the night of our soirée, by coincidence half of Bordeaux’s younger winemakers were dining downstairs, letting their hair down after a merchant tasting earlier that day. It is not the flashiest restaurant you will ever set eyes upon, fairly rudimentary in terms of decor, “posh bistro chic” perhaps, though there was a nice buzzy atmosphere for a Monday evening and just the right amount of chatter and laughter. It is a restaurant where you would join friends rather than choose for an intimate date, unless they loved French cuisine.

As banal as it sounds, what I love about Noizé is its simplicity. You come here to eat well. We are not talking Michelin-starred refinement or molecular gastronomy or ingredients sourced from countries that you never knew existed. No, we are talking about the waiter putting a plate of food in front of you and an instantaneous reaction along the lines of: I am going to eat every damn last morsel because that looks bloomin’ delicious. Then you consume the dish as slow as possible, masticate like a sleepy hippo, because you cannot bear the thought of the plate being empty. When the dinner is finished, you experience a warm glow of satisfaction and mentally go through your diary to book the next lunch or dinner. Your stomach is saying: Thank you. I just loved every mouthful at Noizé.

We commenced with cheddar gougere, beautifully puffed up and warm, not too buttery and dangerously more-ish. Since my diet has veered away from meat, to the benefit of my waistline and the chagrin of my now baggy jeans, I opted for the butternut squash velouté with bacon, thyme, Chantilly cream and chestnuts. This was as good as it sounds. Chestnut and butternut squash is a match made in heaven, somewhat autumnal but it was so Arctic outside that it was perfect. Main course was a perfectly cooked hake that was wonderfully moist and flakey on the inside with just the right amount of crispness on the skin, matched with Jersey Royals, mussels, leek and a chive buerre blanc. It was not the apex of gastronomy but it was the apex of deliciousness. We finished with a round of Comté cheese and that was me done. One. Satisfied. Customer. 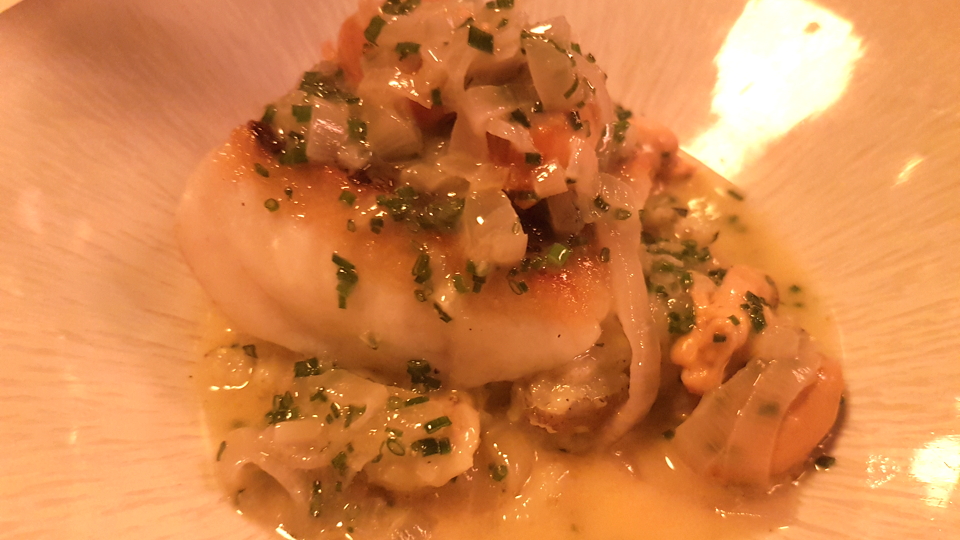 The bottles were an intriguing bunch. We began with a bottle of champagne. The Extra Brut Substance from Selosse was a December 2008 disgorgement so it had a decade’s bottle age. Flame me all you want, but Selosse never rocks my world because like others, most notably Tom Stevenson MW, I just cannot abide their oxidative nature. It just seems wrong. Burnished gold in color, it has a pungent dried honey, hazelnut and rather musty bouquet whose oxidation became increasingly pronounced with aeration, to the point where I refused to stick my nose in the glass. The palate has a potent, almost acrid, nutty entry with a strong cider-like element that put me totally off. I appreciate the weight and length of this champagne and a Selosse fan could find a million excuses why it smells and tastes as it does. But the bottom line is that I would much rather drink a well-made commercial supermarket champagne that has not forgotten the first rule of wine – it must give pleasure.

My own contribution was white Burgundy. Domaine Bachelet-Monnot down in Maranges is one of my go-to producers, though I need more experience of mature vintages and so I poured a 2008 Puligny-Montrachet Les Folatières 1er Cru. Showing just a little ageing in color, it has a knockout bouquet that is surprisingly flinty for a 2008, almost Chablis-like, not far from a Vincent Dauvissat of similar age. The palate is beautifully balanced with finely detailed hazelnut, almond and crushed stone notes. It displays wonderful weight and length, a Folatières that just feels effortless and sophisticated. Bon vin! And unlike the Selosse, it gave so much pleasure.

We then moved back in time. The 1961 Richebourg Grand Cru from Domaine Charles Viénot comes from the Nuits Saint-Georges based négociant that also owned vines, including a parcel in this Grand Cru that was sold in 1984 to Domaines Jean Grivot and Mongeard-Mugneret. Quite deep and slightly turbid in color, it showed little bricking. The bouquet offer blackberry, stewed black tea, bay leaf and clove aromas, a little rustic but attractive all the same. The palate is quite structured and beefy, grippy with a smooth texture, continuing the black fruit theme with a seaweed-tinged finish. It is a broad-shouldered bucolic Richebourg, the kind that does not mind a punch-up in a bar at the weekend, blissfully ignorant of finesse. But I could not help falling for its charms. This was partnered with an ancient Pauillac. The 1928 Pichon-Longueville de Lalande is a vintage that I have tasted once previously, prewar bottles now very difficult to find. This bottle came with good provenance, ex-Nicolas, however it felt a little funky on the nose with a molasses note on the palate. I would have written it off, but when I returned home and unearthed a tasting note from a decade earlier, it seemed eerily similar: leather and slightly bretty on the nose with an odd honeyed tincture. Again, that bottle demonstrated toffee-like notes and molasses that detracted from its breeding, so perhaps that is representative of the wine? If so, that is disappointing because it was a legendary growing season and the 1928s from Latour and Batailley to name but two are superior. 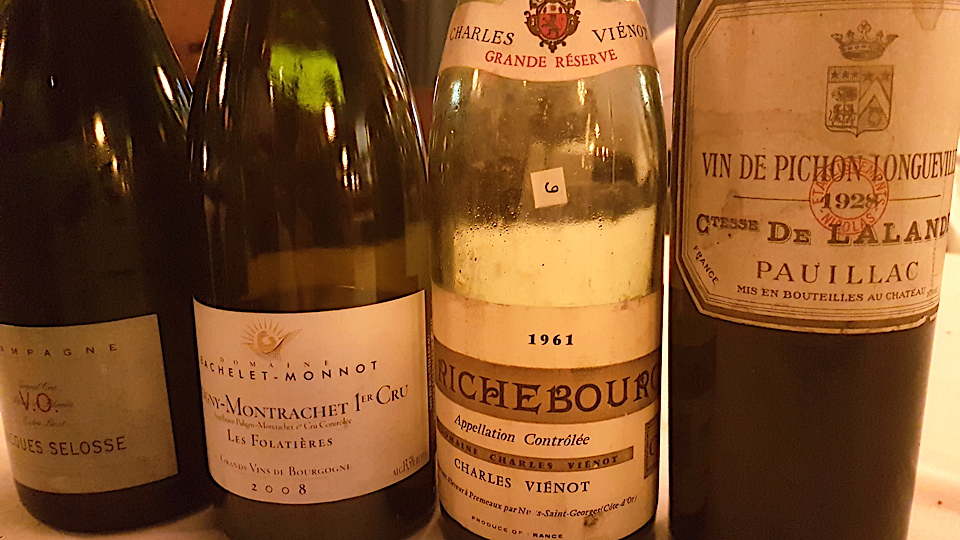 After the dinner I nipped downstairs where the Bordeaux winemakers were as rowdy as expected, many surprised to see me dining upstairs. They seemed to be enjoying the dinner at Noizé as much as I had, and no wonder. There are no airs and graces. It is a refreshingly unpretentious, unglamorous restaurant that has a single purpose: to produce damn delicious food at reasonable prices, dishes that make you want to return as soon as possible. In central London such establishments are difficult to find. Their wine list is pretty broad and well chosen and they are very accommodating for those that wish to BYO as specified on their website (very unusual to find that in London.) If you are looking for a vibrant atmosphere, good French food and a central location, I cannot recommend Noizé enough.