Pizza and The Original Hamburger in New Haven, CT

In America’s pizza world New Haven, Connecticut holds a special place in the hearts of die-hard purists and history buffs. Three of the country’s longest established and most venerated pizzerias thrive here and are universally considered must-stops and on the bucket list for pizza completists – Frank Pepe Pizzeria Napoletana, which opened its doors on Wooster Street in 1925; Sally’s Apizza, founded in 1938 and located just a couple of blocks down the street by Frank Pepe’s sister, Filomena Consiglio and named for her son, Salvatore; and Modern Apizza, also not far away, on State Street, in 1934 by Antonio Tolli when he was only 24 years old.

While all three originally used coal-fired, brick ovens, Modern changed over to oil fuel in 1967, when local coal production ceased, but Sally’s still burns coal in their original oven, as does Pepe’s at both their adjunct carry-out and their “new” location, which opened in a former drug store in 1937. Friendly but often heated arguments ensue when discussing the virtues of each pizzeria but my un-scientific and anecdotal studies have proven that Modern, while the least-known to outsiders, is marginally the preferred choice of locals.

I was recently passing through New Haven, outside the always hectic lunch and dinner hours, so made the not-difficult decision to stop by Modern, followed by a quick swing into Louis’ Lunch, founded in 1895 and home of what many historians believe is the world’s original hamburger. As usual, both snacks were sublime, both for the food and the atmosphere. I cannot recommend an eating tour of New Haven highly enough, especially for anybody working their way up the I-95 and I-91 corridor between New York and Boston. It’s more than worth a detour, as the Michelin people would say. 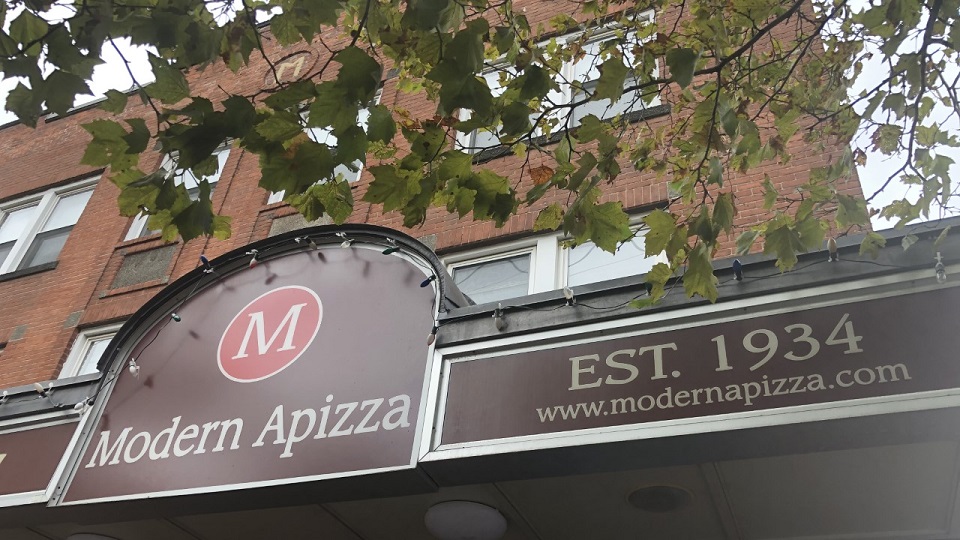 While the two dining rooms here can get packed, with lines out the door, at lunch and dinner, afternoons are quiet. The menu offers only pizza, calzones, a couple of salads and garlic bread; pizza is, obviously, the main event. I opted for my favorite pie here, the White Clams Casino, which is, like it sounds, littleneck clams and bacon, with perhaps, this time, a few too many strips of roasted red and green peppers on a mozzarella base. But I’m not a big bell pepper guy, so others may disagree. The crust was perfect aside from a bit of heavy charring on the outer rim in some spots (again, many people love it that way) while the clams, and, especially, the bacon were abundant. A little over half a 12-inch pie made for a relatively filling late lunch. The rest was, unfortunately for me, enjoyed that evening by the local raccoon family that found its way into my car and devoured my planned next day's breakfast while I was inside, tending to work. I hope they appreciated it as much as I did. Lesson learned – don’t leave the windows even slightly cracked if there’s a fragrant box of pizza, especially with clams, resting in your back seat. 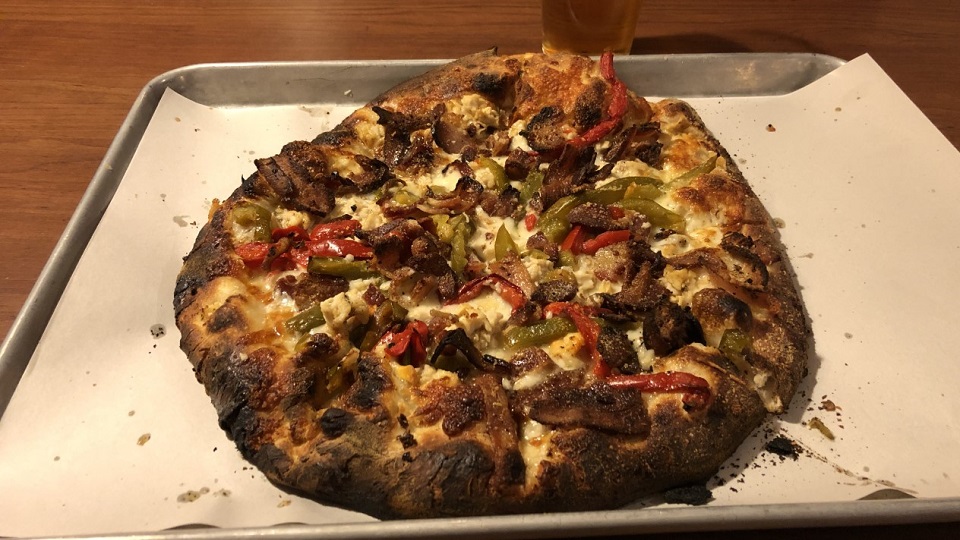 White Clams Casino Pizza with littleneck clams and bacon, strips of roasted red and green peppers on a mozzarella base. 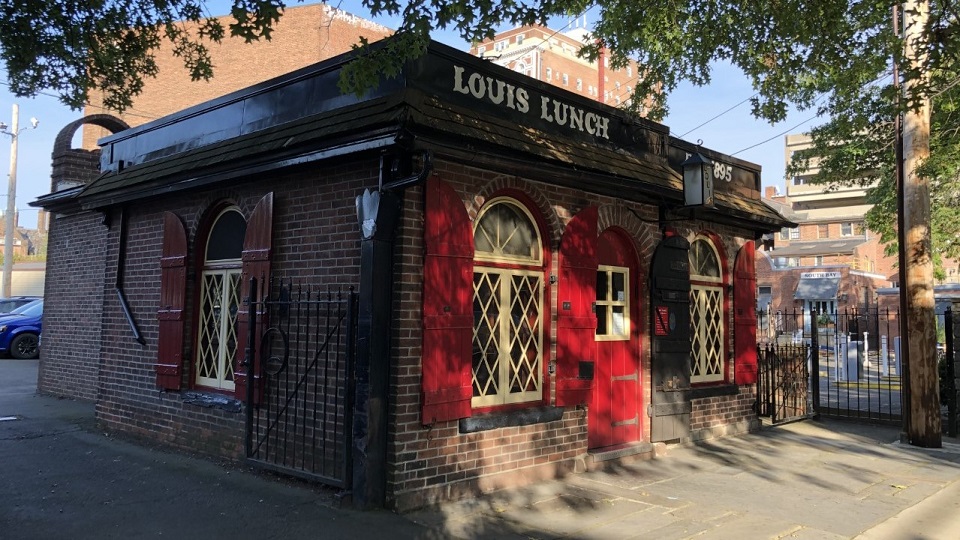 Speaking of arguments, while many aver that Louis’ Lunch was the first hamburger place in the U.S., others demur. The Library of Congress says that it’s the original, and that works for me. First opened as a lunch wagon, in a railroad car in 1895, Louis’ Lunch and owner Louis Lassen served their first hamburger was served here in 1900. Nothing much has changed since then. Today, the restaurant, if you can call it that, is still owned and run by the original family, with Jeff Lassen representing the fourth generation. Ordering is dead simple as only hamburgers are served, with the option of potato salad (quite good) or potato chips on the side and pie of the day for dessert. That’s it. The sodas made by the local and iconic Foxon Park Beverages (founded in 1922) are the obvious choice of beverage as there’s no beer on offer. 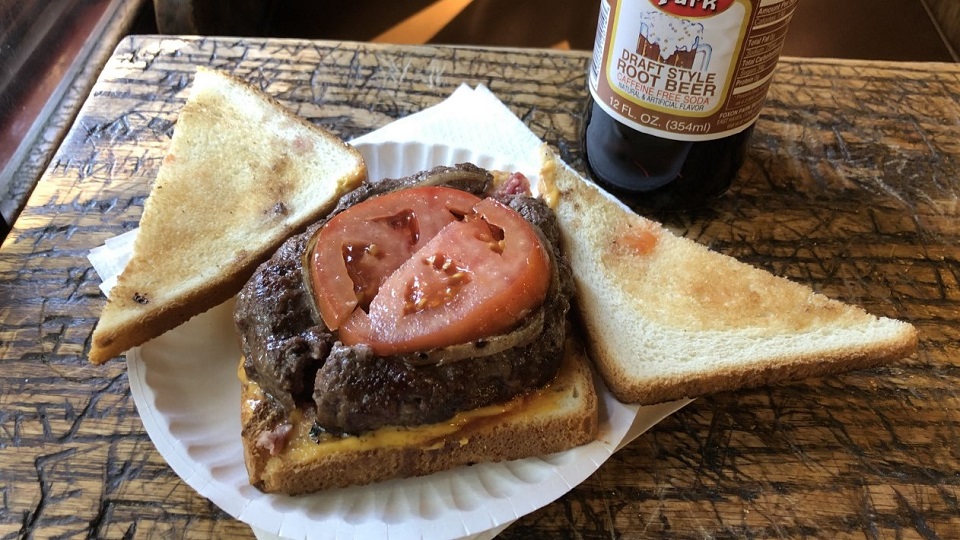 Louis’ is notorious for serving their burgers their way other than “no tomato”, “no onion” or “no cheese”. There’s actually a sign right by the cash register clearly stating “Don’t Ask for Ketchup”, and they mean it. Same goes for mustard, although there’s no warning sign. So, the burger it is. About as simple as it gets, Louis' burger is a little over a third of a pound of freshly ground beef, in a thick, loosely packed, rare to medium-rare patty, with sharp cheese spread (apparently introduced in 1972), tomato and onion on thinly sliced Pepperidge Farm (another Connecticut icon, founded in 1937, just down the road, in Norwalk) white bread. The burgers are made to order and take about ten minutes to prepare, so this isn’t fast food. The Lassens have been using the same three vertical broilers since 1898 while the conveyor toaster made its debut in 1929. This amazingly delicious, messy burger, served in all its minimalist glory on a flimsy paper plate that quickly gets soaked in the burger’s juices, will run you the princely sum of $7.00, cash only. There are literally only four tables here, including the two-person booth that I was fortunate to snag before the ubiquitous line re-formed and the five stools at the counter were out of commission thanks to COVID-19 precautions. To say that I cannot wait to go back would be an understatement.