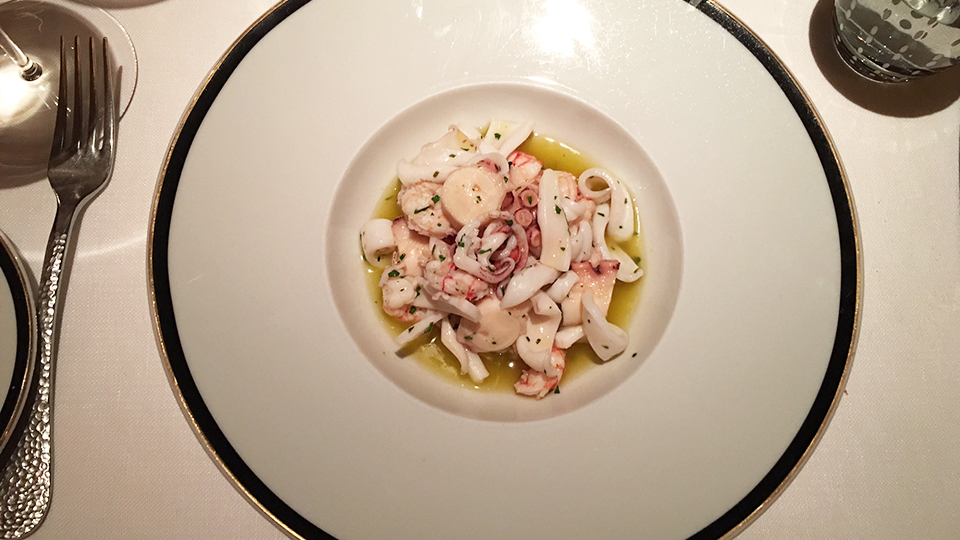 Langosteria is one of the hippest restaurants in Milan that harkens back to Paris brasseries, but with a Milanese fashion attitude, very good food and a truly outstanding wine list.

Not all restaurants that set out to be hipper than hip succeed in their intent. All too often the pretentiousness, glitzy superficial attitude to food and wine, unbearably noisy surroundings and would-be professional service are downright infuriating. Langosteria is that rare, very trendy establishment that caters to a high fashion jet setting crowd (but not only), while managing the neat trick of being à la page, yet without falling into ridicule. Simply put, Langosteria is one of Milan’s most fun and enjoyable eating addresses right now. Its success has been such that the Langosteria “empire” has expanded mightily over the years. Langosteria was founded in 2007. It was followed by Langosteria Bistrot (founded in 2012), Langosteria Café (2016), and now also Langosteria Paraggi (2017), the first Langosteria establishment located not in Milan but near Portofino in Liguria. 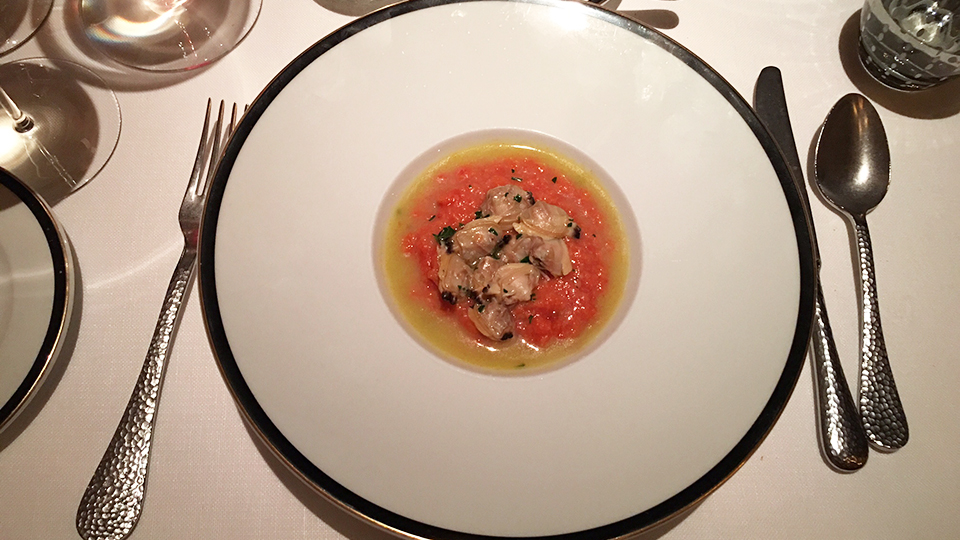 Even if the food and wines weren’t so good, you’d have to at least like Langosteria’s look, which begins with the clubby set up of the tables, chairs and plush red sofas, the long and tight hallways, the many small dining rooms with old photos on the walls and shelves full of different items and decorations[AG1] . The lighting is subdued and candles flicker on the tables, but the decidedly romantic atmosphere that permeates the place allows you to see clearly what it is you are eating, as well as your date. To be sure, Langosteria serves some of the best seafood in Milan these days. Owner-chef Enrico Buonocore’s parents are from Maiori and Cetara, two towns associated with some of the most memorable sites and dishes of Campania’s magically beautiful coastline. Combine that DNA and the environment in which Buonocore grew up, which included numerous trips to France, and you understand the philosophy that is at the core of most of the food served at Langosteria. During my latest dinner, a number of dishes were correctly executed with some that clearly rose above others for sheer intensity of aroma and flavor (for example, the paccheri with blue lobster, spring onions and yellow datterini tomatoes and the black cod, scarola salad, yuzu and ginger sauce). The level of cooking is not especially memorable, nor is it about jaw-dropping technical ability, but no single dish comes close to disappointing. Even better, there is obviously plenty of experience and knowledge in the kitchen to avoid camouflaging the pure aromas and flavors of the seafood, allowing them to shine, as they should. 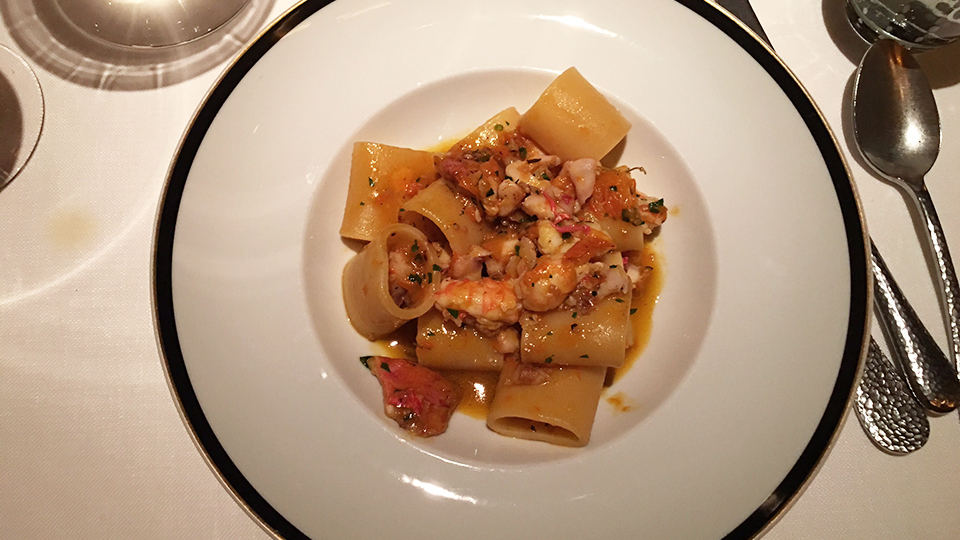 Langosteria’s wine list is monumental, one of the best in Italy, and boasts a veritable who’s who of great Italian and foreign wine estates, with a smattering of older vintages to add even more interest. An evening here allows you to span over the breadth of Italy, and this is exactly what I chose to do on my latest visit. I kicked dinner off with wines produced from two outstanding family-run and fairly small estates that are what make Italian wine so exciting. The 2017 Castel Juval Müller Thurgau is one of the best such wines made in Italy, from a producer in Alto Adige’s Valle Venosta who also makes a stellar Pinot Bianco (they use German language name Weissburgunder: it’s one of Italy’s best) and believe it or not, even a very good Riesling. Unfortunately, Juval make very small volumes of all their wines and export even less; which is a shame, as the lovely pear, lemon and nutmeg nuances of this pretty wine deserve to have a larger audience. Abruzzo’s Tiberio winery has quickly risen to the top of the hierarchy not just in Abruzzo’s but in all of Italy. What the talented Cristiana Tiberio has achieved in the very hot 2017 vintage with Pecorino (a variety that does not like heat) is a testament to her talent. The 2017 Tiberio Pecorino is by no means the best Pecorino she has ever made (and frankly, it would have been very strange if it was otherwise, given the year’s weather), but it offers lovely balance with pure sage and kiwi notes that mingle with ripe orchard fruit nuances complicated by a saline edge. Both these wines made for a wonderful start to my meal, but they would have paired very well with all the other dishes I chose to eat this evening. 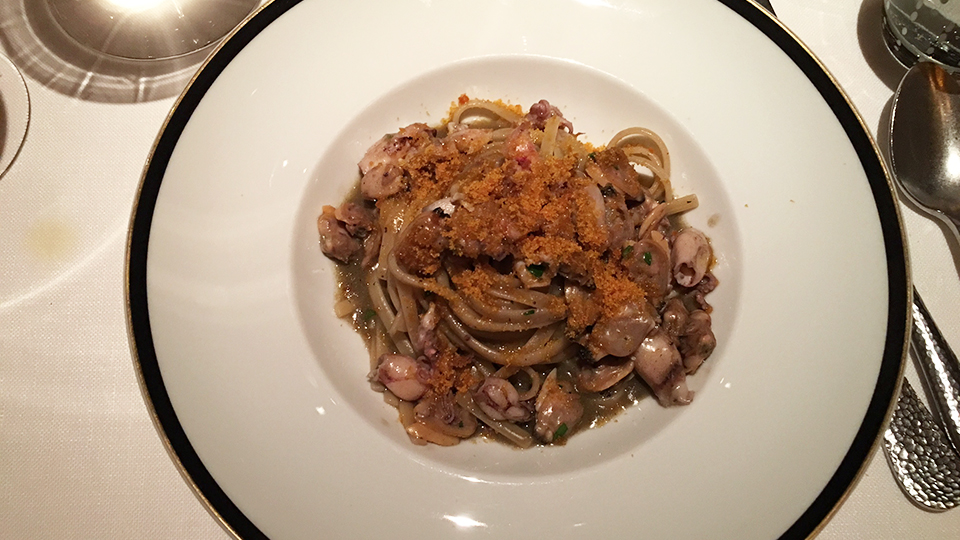 The Marche’s La Monacesca also makes wines that are real Italian classics. Their 2014 La Monacesca Verdicchio di Matelica Riserva Mirum is a good example of what their reserve, oaked, Verdicchio is all about. Almond paste, orange oil, hazelnuts, butter and vanilla all come together on the palate, while the wine’s mouthfeel is suave but fleshy. Happily, the 2014 also strikes me as less oaked than some other vintages of this wine. A rare example of a successful Italian Chardonnay is the deep and layered 2001 Bellavista Chardonnay Curtefranca Convento della Santissima Annunciata, an oaked Chardonnay that is aging gracefully and can stand up not just to complex fish dishes but to white meats as well. The strong notes of oak-derived caramel the 2001 showed in its youth are still present to an extent, but at seventeen years and counting they now go a long way to making the wine an enjoyable, balanced drink. I closed off my evening with what are potentially two of Italy’s best sweet wines, made with Picolit (a white variety characteristic of Friuli-Venezia Giulia) and Moscato di Scanzo (a red cultivar typical of Lombardy). Both the 2013 Maurizio Arzenton Picolit and the 2009 Biava Moscato di Scanzo showcase competent winemaking ability and varietally accurate, if slightly subdued, aromas and flavors (tropical fruit and honey for the Picolit, strawberry syrup and quinine for the Moscato di Scanzo). 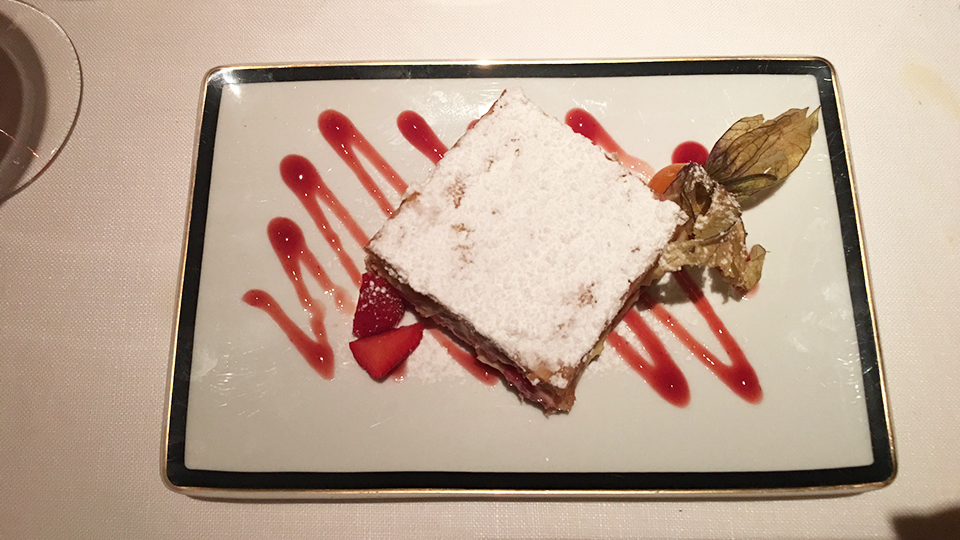 All too often, there is very little substance to many of the ultra cool, super fashionable dining establishments that spring up all over the world, while the din of those yelling into their cell phones or at each other is, at the very least, tiresome. Langosteria’s wait staff and sommeliers are knowledgeable and friendly, the food is quite good and the wine list spectacular. And so, all things considered, a meal at Langosteria is far more satisfying than many you’ll have in numerous of Milan’s media-darling and awarded restaurants that feature much hyped chefs (for no discernible reason, given the level of their cooking). True, prices are high, but the odds are just as high that you’ll come away happier with your meal here than you would from many other of the city’s other well-known dining establishments. 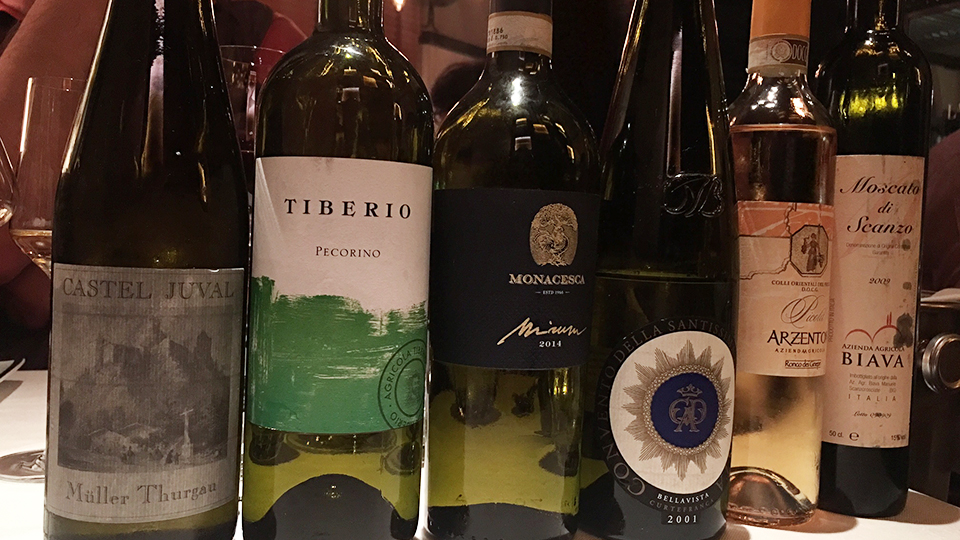