I sometimes think that every wine writer out there must feel like he or she hasn’t come of age until they’ve taken a shot at poor Pinot Grigio. The list of offensive descriptors I have read over the years is nearly endless: Pinot Grigio is a pedestrian grape (it is anything but)…it produces forgettable wines…boring, insipid, pointless, waste of time and industrial…a successful attempt at turning wine into water…wait a minute now, that last one is actually mine, written circa six years ago. It’s hard to blame all those who have turned Pinot Grigio into their favorite whipping boy. Many Italian wines so labeled really are nothing to write home about. However, the mistake lies in considering all Pinot Grigios as cut of the same cloth, or worse, to view Pinot Grigio as a lesser cultivar. 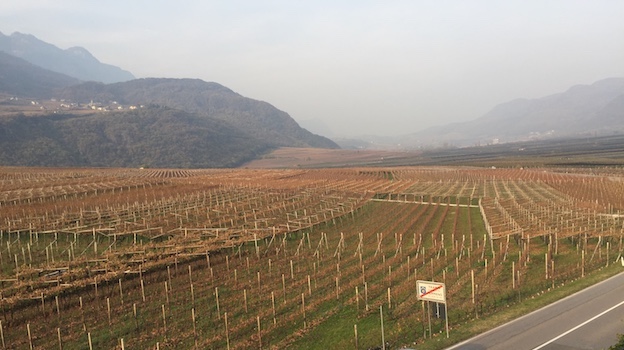 Alto Adige’s Tramin cooperative (which takes its name from the small town of the same name) is one in a long line of outstanding cooperatives this idyllic region northeastern Italian is blessed with. Arguably, it is in Alto Adige that Italy’s best white wines are being made today (although some experts might argue on Friuli Venezia Giulia’s behalf). Tramin is an especially important cellar, as a number of its wines are either Italy’s best, or at a minimum rank in the top three, of their respective categories. And while the coop’s Gewürztraminer Nussbaumer usually grabs most of the spotlight, Tramin’s gently oaked Pinot Grigio Unterebner is one of the world’s better dry Pinot Grigios. Rich, nuanced and ageworthy, it showcases the high level of quality Pinot Grigio can attain.

Pinot Grigio is the Italian name of the grape variety known as Pinot Gris in France or Oregon, In Germany it is called Grauburgunder, while in Austria they might call it Ruländer (but this older name is now increasingly rare). Although the languages are different, the grape variety is one and the same. In fact, Pinot Gris has a long and distinguished history. In Burgundy, Pinot Gris was planted long before Chardonnay (have you ever asked yourself why the variety’s German name is Grauburgunder?), and Burgundy insiders are aware that many of the great white wines Burgundy is now famous for were actually made wholly or with large percentages of Pinot Gris (called Pinot Beurot), not Chardonnay, in the 18th and 19th centuries. In Alsace, Pinot Gris was officially named one of the region’s noble grapes and can be planted in Grand Cru vineyards (only Riesling, Gewürztraminer and the region’s two Muscats, Ottonel and d’Alsace, have been so honored). Today, few would argue that Zind Humbrecht’s Pinot Gris Clos Saint-Urbain Rangen de Thann isn’t one of the world’s twenty or thirty greatest dry white wines, while Domaine Weinbach’s Pinot Gris Altenbourg Séléction de Grains Nobles Quintessence has few if any peers in the sweet wine department. Pinot Gris are some of Oregon’s most delicious whites, and show well in other New World areas as well. In Italy Tramin’s Unterebner is joined by Vie di Romans’ Dessimis, Lis Neris’ Gris, and Marco Martin-Lo Triolet’s Pinot Gris (both the non-oaked and the Elevée in Barrique bottling) are amongst the country’s best white wines. So it would seem to me that Pinot Grigio deserves far more credit than it gets. Unfortunately, Pinot Grigio is a victim of its own success. Because the grape is remarkably capable, given even barely competent winemaking, to give something palatable, everyone seems to want to give it a try. And so the world has gone awash with inexpensive, innocuous Pinot Grigio whose only claim to fame is their early appeal and accessibility, but little else. The flip side to all of this is that it then becomes very hard to sell the best Pinot Grigios, as reserve bottlings are invariably more expensive. Until producers, importers and sommeliers succeed in getting the wine loving public to understand that Pinot Grigio wines can be so much more than just neutral plonk, the best Italian Pinot Grigios will continue to be a tough sell. 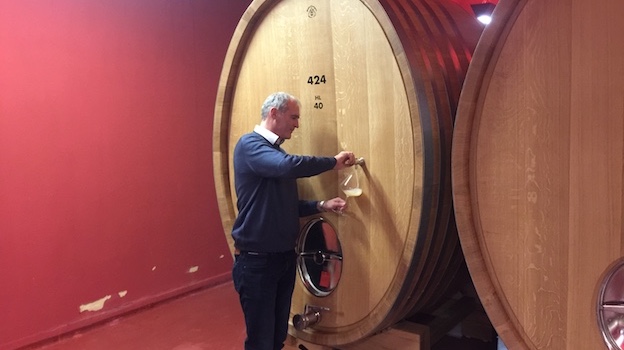 Tasting from the barrels at Tramin with Willi Stürz

Founded in 1889 by Christian Schrott, a member of the Austrian parliament and the rector of Termeno (Tramin, in German), Tramin is one of the oldest cooperatives in Alto Adige. It has 300 members, or roughly 150 families, that together own 260 hectares, which tells you just how small the average land ownership is Alto Adige. Tramin culls two thirds of their grapes from the Termeno area, but about one third of the vineyards are located in the townships of Egna, Ora and Montagna. The coop produces roughly 1,800,000 bottles a year, of which 400-450,000 are wines made with Gewürztraminer and another 250,000 with Pinot Grigio. Clearly, it is the wines made with these two varieties that are the most numerous (as well as the most important) in Tramin’s portfolio. In fact, Pinot Grigio was not always so prized in the Tramin area. Over the last 100 years, Tramin’s viticultural area was most famous for wines made with Schiava or Gewürztraminer. In Medieval times, many other white grape varieties grew there, such as the now rare Lagrein Bianco. Pinot Grigio became very important in the Termeno area only at the beginning of the 20th century, when it was still known Ruländer. Using the latter name back then can hardly surprise, given Alto Adige’s Austrian roots (the region belonged to Austria until 1919) but the name Ruländer was still commonly in use until the ‘70s and even the ‘80s (instead, Grauburgunder was and is rarely used in Italy). Nevertheless, despite its growing commercial success, Tramin didn’t bottle Pinot Grigio as such prior to the 1980s: it was mostly sold as bulk wine (until recently, Pinot Bianco endured a similar fate).

First made in 1981, Unterebner is Tramin’s top Pinot Grigio selection. Unterebner is the name of a specific site with a small stone house sitting in the midst of eight different parcels of vines that have historically been the source of Tramin’s best Pinot Grigio grapes. The vines range from 15-40 years old and are planted with a southeastern exposure at altitudes ranging from 410 to 600 meters above sea level. The soil is mainly calciferous gravel and loam, with a partial porphyry bedrock. The climate is fairly Mediterranean with plenty of sunlight and warm days, but nights are cool thanks to cold northerly night wines that blow downslope. This combination of potentially very hot days and cold nights contributes strongly to the making of very ripe, almost luscious Pinot Grigios that are nonetheless fresh and vibrant. Depending on the vintage characteristics and the quality of the grapes, Unterebner may be made with grapes grown in only six or seven of the parcels, though most often all eight are used. The vineyards are planted with mainly clonal selections, especially those of the Istituto San Michele all’Adige (ISMA) series (though like most wineries, Tramin always plants their vineyards with at least four-five different clones). The ISMA clones have met with success mainly because they are mostly loose-architecture clusters, and therefore less prone to rot. As an aside, Pinot Grigio’s compact bunch and thin skins make it a rotfest in bad vintages. In fact, the compact nature of Alsace’s Pinot Gris clone 53 is the main reason why this clone has been practically phased out by most everyone in Italy. By contrast, Geisenheim Pinot Grigio clones have proven too productive in Alto Adige, and so these are also slowly being phased out in Alto Adige. Ironically, one problem faced by Tramin today with their ISMA clones is that they are almost too loosely packed and yields are miserly (45 hL/ha).

The better Pinot Grigio wines will always speak of pear, yellow apple and even strawberry (remember, Pinot Grigio is really a red grape), with complicating hints of almond paste, caramel or butterscotch (present independently of the use of oak), honey and truffle. Not blessed with the high acidity levels of Riesling, Pinot Grigios tend to be full bodied and creamier. Furthermore, Pinot Grigios from Alto Adige are especially characterized by a degree of salinity that is not always found in Pinot Grigios from other parts of Italy. In particilar, Tramin’s Pinot Grigios are also marked by more calcareous notes than those of the Valle Isarco, where soils tend to be colder, richer in schist and of volcanic origin. 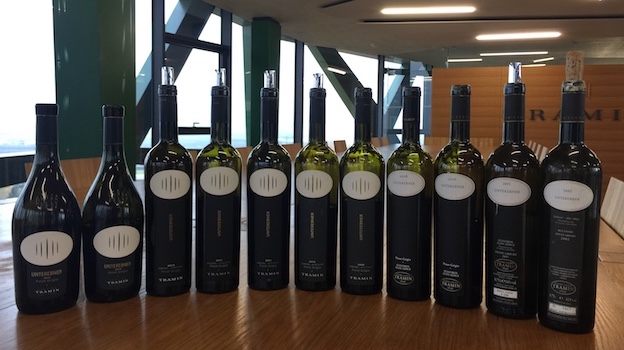 Willi Stürz is one of Italy’s greatest winemakers. It is Tramin’s immensely good fortune that he has been their kellermeister (or chef de cave) since 1991. Stürz likes to pick the grapes quite ripe (he usually has the Pinot Grigio picked around September 20 and the first few days of October). Full bunches are softly and slowly pressed, while skin contact of the must is avoided. Fermentation takes place slowly at controlled temperatures (18-20°C), and the wine is barrel fermented in oak (two thirds in large 30-40HL Austrian and French oak casks, and one third in Austrian and Burgundian oak tonneaux, of which roughly 20% is new oak). Early vintages were fermented and aged in stainless steel. The first Unterebner to see partial oak use was the 1994. By 1998 all of the wine was fermented in large oak barrels and tonneaux as per the approach still being used nowadays. Yeasts are those selected and cultured directly in Tramin’s cellars (roughly eight years ago) and actually carry the Tramin name. Unterebner usually undergoes malolactic transformation save in very warm vintage. Stürz believes that even though Pinot Grigio is a low acid variety, putting the wine through malo gives it much better overall balance. He also finds the wines age much better. Starting with the 2014 vintage, Unterbner is aged for eleven to twelve months in oak, instead of the six to seven months of prior vintages.

Unterebner is a suave, rich, almost voluptuously styled Pinot Grigio that showcases how good judiciously used oak can be with this variety. In some vintages, such as 2010 and 2007, the oak tends to dominate but with startlingly different results. While in 2010 the finished wine is less than successful, in 2007 it is remarkably rich but lively, if strongly marked by vanilla and almond notes. For the most part, the oak stays in the background, but I think its presence also means that Unterbener requires cellaring, and shows best six to eight years, or more, following the vintage, as this vertical seems to suggest.

Production is around  25,000 bottles a year, but it is not nearly enough. Unterebner is always the first wine Tramin sells out. Unfortunately, many knowledgeable wine lovers are left scrambling every year just to find a few bottles of one of their favorite nectars.

Looks like Pinot Grigio may get the last laugh yet. 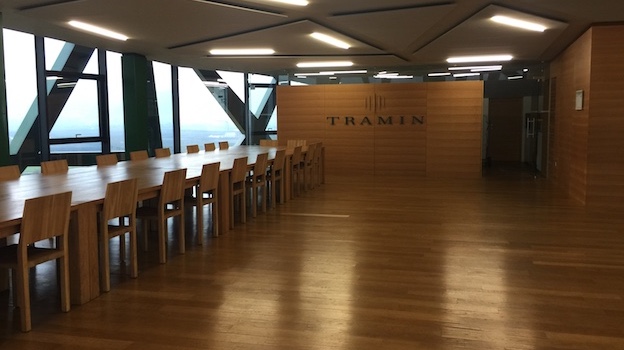 The following wines were sourced directly from the estate (except for the 2007 which I opened from my cellar) and were tasted with winemaker Willi Stürz and commercial/sales director, Wolfgang Klotze, in September 2016.