Many moons ago, around 1999 if I have my dates correct, I was invited to an impromptu lunch at the much-missed Hanover Bar & Grill, a rather dingy basement steakhouse that boasted decent Antipodean wines, a boisterous atmosphere and models from the Vogue head office opposite, picking at their salad. This was back in the day of long liquid lunches, when workers staggered back to their Mayfair offices and snoozed away the afternoon. A Bordeaux merchant introduced me to a young Hélène Garçin-Cathiard, then riding the crest of a wave after her 1998 Clos l’Église received a score that got her telephone ringing 24/7. Not wishing to tar all my friends in Bordeaux with the same brush, but she was different. She brimmed with joie-de-vivre, you felt that you could invite her out clubbing and she’d drink you under the table. She was a breath of fresh air and became one of the first Bordeaux proprietors I got to know well. Since then, she has hardly changed, indefatigable, feisty and funny with enough energy to solve the current fuel crisis, energy that she expends onto her properties, giving them a sense of momentum.

I visited her Saint-Émilion estate, Château Barde-Haut, last June, to conduct a comprehensive tasting of her properties together with her husband Patrice Lévêque. For this tasting we focused upon Barde-Haut, Clos l’Église and Poesia. Readers should note that their fourth property in Castillon, Château d’Arce, is well worth seeking out. Just to spice things up, the vintages were not revealed until after the tasting.

“My first vintage was 1997,” Garçin-Lévêque tells me before broaching the first bottle. “I arrived in Bordeaux the previous year. Before that, I was at school and then I went to work in Canada. I was selling Bols Blue in clubs. I had a lot of fun. My family bought Clos l’Église at the end of 1996 and oversaw the élevage of that vintage, though we had to transfer the barrels to Haut-Bergey as we had to completely overhaul the cellar. So, the 1997 Clos l’Église was the first vintage that we made at the château.” 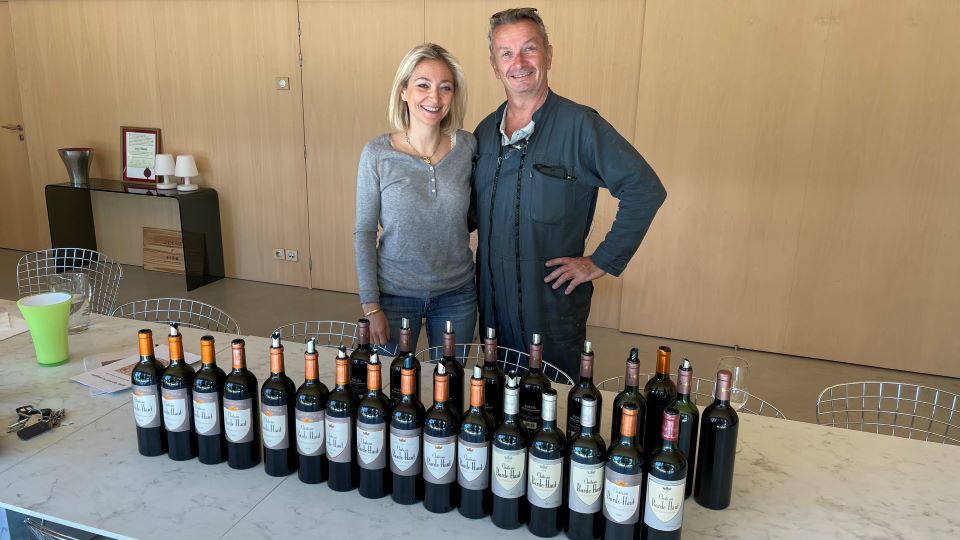 Hélène and Patrice Garçin-Lévêque. Notice the rare sight of a Bordeaux winemaker in work overalls instead of tailored suit.

I asked how she met her husband and became Garçin-Lévêque? Her better half is really a Burgundian at heart, one of the few winemakers you can guarantee will be upon his tractor whatever time you visit. Most Bordeaux proprietors would not know how to turn the tractor ignition on, let alone manoeuvre it through the vines for hours on end. Personality-wise they are yin and yang, her husband more laconic, a pensive winemaker who is constantly questioning his approach. Garçin-Lévêque answered my question in a typically candid fashion: “Patrice came to visit Château Haut-Bergey in 1996, and I told him ‘you need to take me out’ because his mother wanted to buy some land from us next to Chantegrive.”

Over the years, I have had many discussions with the couple about the use of consultants. In the past, they appointed Michel Rolland to assist from 1998 to 2001, Dr. Alain Reynaud until 2014 and then Thomas Duclos. But that has changed. “There are no consultants now, just Patrice,” she tells me. “It was very interesting to work with consultants, giving advice and informing what is going on around us, though they did not make final decisions. Now, we exchange ideas with many different people, but we have a clear vision of what we want to do at all our properties.

Clos l’Église lies directly opposite l’Eglise-Clinet in the heart of Pomerol. The two once comprised a single estate until its division, whereafter Clos l’Église was owned by the Rouchut family and Clos l’Église-Clinet the Mauléons before being renamed. Clos l’Église was owned by Patrice Ducher until its acquisition by Sylvaine Garçin-Cathiard, the sister of Daniel Cathiard of Smith-Haut-Lafitte, in 1997. The family already owned Haut-Bergey in Pessac-Léognan. The transaction for their Pomerol vineyard took place in January that year, and Sylvaine Garçin-Cathiard appointed her daughter to run the estate. The debut 1997 was not an easy one to start with, and to quote verbatim in my Pomerol tome: “We always take over a vineyard in a shitty vintage.”

“For me, Clos l’Église is a jewel.” Garçin-Lévêque tells me. “We are lucky to be where we are on deeper clay as some parts of Pomerol suffer during the heat. A lot has changed in recent years, though not so much in the vineyard, just replacing the Cabernet Franc with massale selection. But we plan to take out around 1.5 hectares of Merlot in the lower sector in 2022, so there will be less production. Our understanding of the terroir has changed in terms of the equilibrium of the vine. We work the soil better by not using any chemicals and ploughing. The cellar has completely changed. Five years ago we changed the tanks from wood to six 55-hectoliter double-skinned stainless steel tanks. We have a new system with automatic pumps on each tank [In fact, these have been installed and used in all their properties]. The vinification is very classic, and we try to be very gentle in terms of extraction.”

This was a fascinating vertical. I had not tasted the 1998 Clos l’Église for several years, the wine that really changed everything for this Pomerol estate. Now at 23 years old, my feeling is that it is not going to improve and arguably comes across just a little monochrome compared to more recent vintages. That said, it remains thoroughly enjoyable with plenty of sappy red fruit and density… it just has a bit too much gloss for my liking. Personally, I prefer the 2000 Clos l’Église, despite a little dryness beginning to creep in towards the finish; the 2001 is even better in tandem with many Pomerol wines. This would be my pick of the older vintages. The 2009 and 2010 Clos l’Église are both maturing very well, although they remain a couple of years away from their drinking plateaus. The wines over the last decade have performed consistently well, the 2016 and 2019 two particular highpoints. The tannins have become much finer in recent years, there is less weight yet more tension and focus. 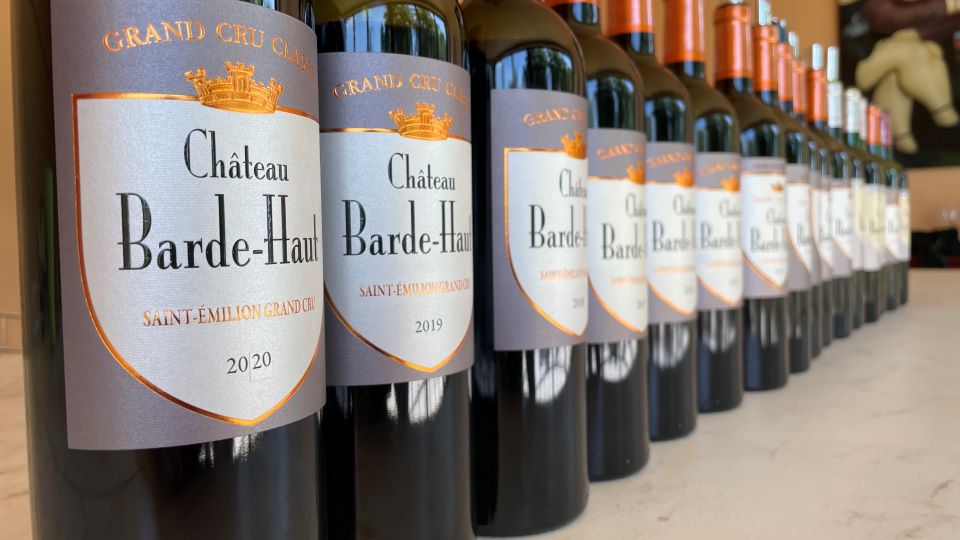 Barde-Haut is a landmark on the Saint-Émilion landscape with its distinctive rusted-iron exterior and wind turbine perched on the winery roof used to generate a small amount of power. The Lévêque family acquired this Saint-Émilion property in 2000, though its history stretches back to the 18th century. The lieu-dit of La Barde makes its appearance in Cassini’s map commissioned by Louis XV in the 1750s and then in Pierre de Belleyme’s map of 1770, located in the southeast of Saint-Émilion. The Lévêques invested heavily in the property to exploit the south-orientated 16.89-hectare amphitheatre of vines, the oldest of which dates from 1955 having survived the following year’s devastating freeze. Neighbours include Troplong-Mondot and Tour St.-Christophe that lies on the opposite. Here, the clay soils lie over limestone bedrock that lends Barde-Haut low pH levels. The grape varieties currently comprise of 80% Merlot and 20% Cabernet Franc, a massal selection courtesy of Clos l’Église, with emphasis on organic viticulture. The winery was completely refurbished in 2010. The wine is fermented in 50hL to 150hL concrete and stainless-steel vats before maturation using 80% new French oak for between 18 and 24 months.

With respect to the wines, I feel that earlier vintages are swayed by consultants’ advice a little more than I would like. These tended to be quite dense and assertive Saint-Émilions determined to make an impression. As such, they can sometimes lack a little grace. The turnaround was clear to see in this vertical, from the most unexpected vintage: 2013. I was astonished just how good this off-vintage Barde-Haut showed, and it seems to put wind in the sails of subsequent vintages. It is as if being born in a maligned growing season, the 2013 is not as preoccupied proving how good it is and consequently it exudes something more refined and natural. Almost immediately, the 2015 and 2016 Barde-Haut show the delineation and poise that was previously missing and that has carried through to more recent vintages, despite the warm summers. Here, the limestone terroir plays a crucial role in imparting the acidic spine in the 2018 and 2019. 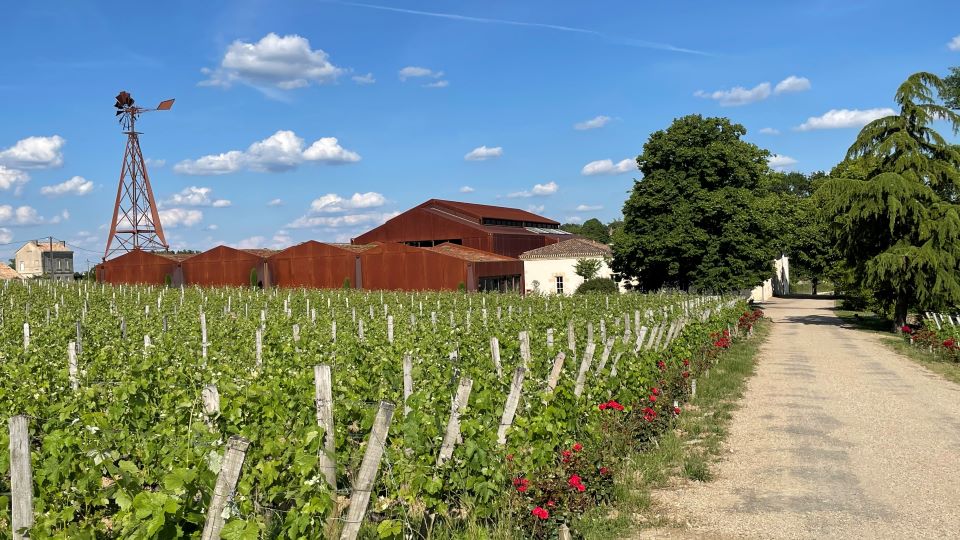 The distinctive winery of Château Barde-Haut.

The most recent acquisition is Poesia, the same name as their Argentinean wine (Bodegas Poesia). The vineyard comprises of 8.87 hectares located on the border with Castillon. Unlike Barde-Haut, this is a very exposed vineyard, one of the highest points within the appellation, around 85m to 89m in altitude, only slightly less than Troplong-Mondot. As we tour the vineyard, Garçin-Lévêque points through a copse of trees where you can spy on the Mitjavile family’s adjacent Château l’Aurage. She tells me how hard she had to fight to secure this vineyard, then known as Château Haut Villet, and it is easy to see why. Firstly, you notice the outcrops of exposed limestone poking through here and there. This is prime terroir with a thin layer of soil, around 40-120cm deep. It feels exposed to the elements.

Whereas Barde-Haut is tucked away in its amphitheatre, Poesia occupies one of the highest points of the appellation. It presently comprises of 70% Merlot and 30% Cabernet Franc, and the vineyard husbandry is the same as Barde-Haut. At the time of my visit, reconstruction work was ongoing, including a new winery. The smell of cement hung in the air, though that would be gone when it received its maiden 2021 vintage. Poesia is matured in 40hL to 120hL concrete and stainless-steel tanks and then matured in around 60% new oak barrel, mainly from the Sylvain cooperage, for between 18 and 24 months. 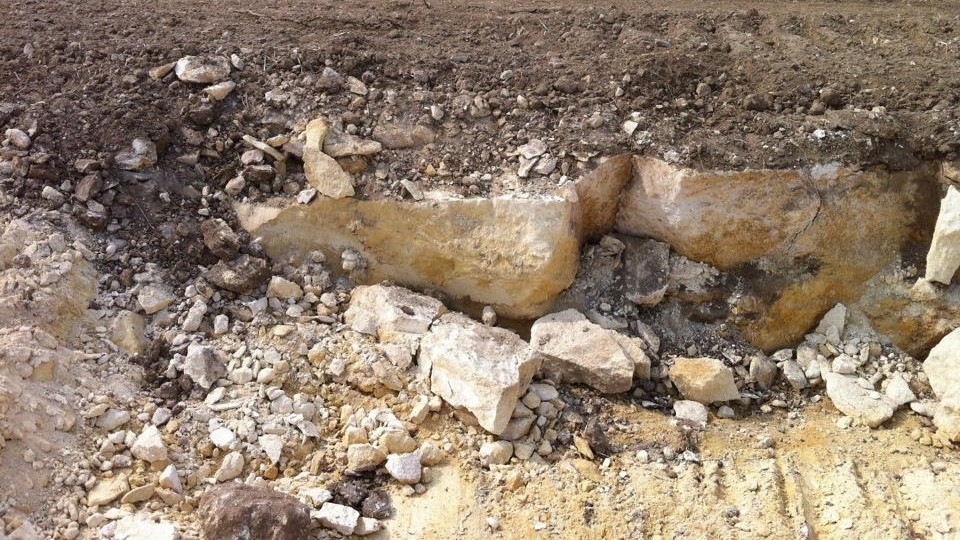 This photograph shows limestone breaking through the surface at Poesia.

This is a Saint-Émilion with huge potential, and, in my opinion, it is Saint-Émilion’s hidden gem. Having toured many vineyards in this area, it is obvious why from the perspective of terroir, securing this prime piece of land when it came up for sale was not straightforward. Let’s just say that some big names were circling and the Cathiards had to fight hard to secure it. This was the first time that I had undertaken a vertical of Poesia and I came away with a higher estimation of what it can achieve. At a time when many winemakers’ main challenge is to capture acidity, vineyards like Poesia that might have once struggled to achieve phenolic ripeness now have an advantage. Of the three wines, this was the revelation. Watch this space!

When this tripartite tasting was complete, we gossiped for a while as customary and recalled our first meeting back at the Hanover Bar & Grill over two decades ago. I do not think either of us have changed much in all that time, though maybe our days of drinking Bols Blue are behind us.