What a treat it is to taste these two Pichon Lalandes straight from the chateau’s cellar. The 1996 Pichon Lalande is stratospheric from the very first taste. The deep, layered bouquet alone is deeply transfixing. Smoke, mocha, dark spices, lavender, crème de cassis, a host of dark-fleshed fruits and a touch of warm, resonant sweetness from the French oak draw me in. All of those sensations follow through to the palate, where the wine is massive, intense and totally enveloping. Time has softened the tannins to the point the 1996 is ready to drink, but there is enough sheer concentration here to support another 20-30 years of exceptional drinking. I am not sure I possess the vocabulary to describe just how captivating the 1996 is, but I do know this: If I had an opportunity to pick up a few well-stored bottles I would take it in a nanosecond. Readers holding the 1996 should be thrilled. The 1996 Pichon Lalande is a magnificent wine with plenty of upside. In word: fabulous. 97+/Drink: 2016-2036+. 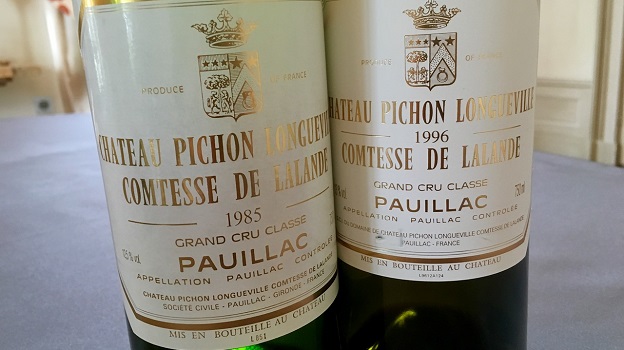 The 1985 Pichon Lalande opens with mature, tertiary aromatics. Still huge and concentrated on the palate, the 1985 still has remarkable depth, but the elements are out of balance, because the aromatics are maturing at a faster pace than the wine’s structural elements. When wines are out of balance, time is an enemy, not a friend. While then 1985 clearly has enough power and overall intensity to keep for many years, I would prefer to drink it sooner rather than later, as the imbalances that are present today will only become more disconcerting as the years go by. 89/ Drink: 2016-2020.