It’s easy to miss the entrance. The street number is virtually completely hidden by scaffolding. Taped white paper notices on the glass door entrance give the impression of a construction site rather than one of New York’s most exclusive dining destinations. A freight elevator brings guests upstairs, and the door opens into David Bouley’s Test Kitchen, a world unto itself in New York City’s Tribeca district. The large loft space functions as both an open kitchen and a small private dining room that is ideal for private events. 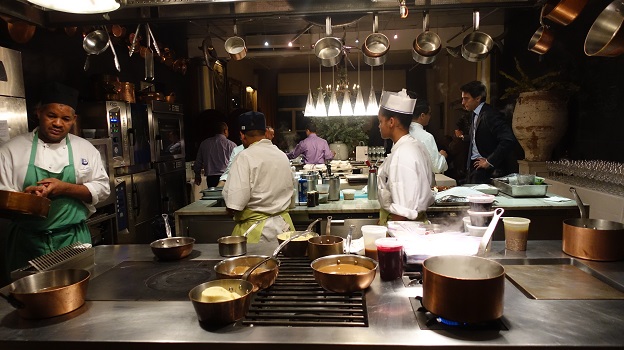 I had had many fabulous meals at the Test Kitchen, but this was our first Vinous event in this space. For the occasion, my colleague Steve Tanzer and I chose a dozen of our favorite 2005 Bordeaux for a retrospective tasting and dinner designed to highlight some of the best wines of this historic harvest at the ten-year mark, with an eye towards showcasing a diversity of styles and terroirs. The wines were loosely grouped in flights of two or three, mostly by theme, but the overall selection was largely about enjoying the best the vintage has to offer. Chef David Bouley created a special menu that highlighted the bounties of early fall. 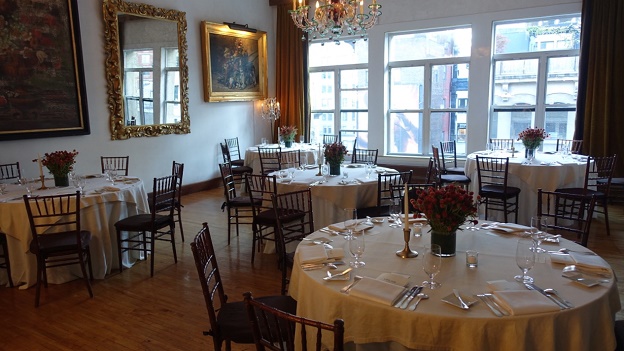 Two thousand five is a magical vintage for Bordeaux. At the time, 2005 was one of the richest and most powerful vintages ever seen. The dry, warm season was tempered by a cool September that allowed the grapes to ripen gradually while retaining considerable freshness. Today, ten years later, the 2005s are just beginning to open up, something that comes as a surprise to a number of people in the room who expected the wines to be much more backward and closed. To be sure, this tasting and others around it make it clear the best 2005s will drink well for decades, but it is also not a crime to start dipping into some of these reds. All of the wines in this tasting were purchased upon release from Morrell’s and stored in a temperature-controlled cellar, which is so important when it comes to older wines. The bottles were opened around 5pm, checked for flaws, and gently double decanted to remove sediment. Wine Director Adrien Falcon and his team did a fabulous job with service, in particular, keeping the wines at the right temperature. 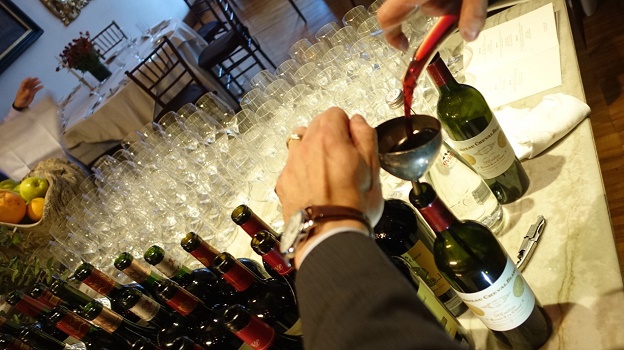 Wines are decanted just prior to service

The 2005 Dom Pérignon is a gorgeous, refreshing Champagne to drink as guests arrive and things get busy behind the burners. The allure and interactivity of the Test Kitchen is simply unmatched in New York City. I always feel like a real participant here, rather than simply a guest or host. What a great space this is.

Both Pomerols are incredibly delicious and open. The Clos L’Eglise is quite racy, but the Conseillante is even more so. The Porcini Flan with Fresh Langoustine, a Bouley signature, is fabulous in the way it marries so many layers of flavor and texture.

For many guests, the Cos d’Estournel is one of the highlights of the night. How could it not be? The 2005 is open, expressive and showing beautifully. The 2005 Léoville Las Cases is harder to enjoy today, as it is clearly built for the future, but both Steve and I have it among our favorites for the night. The Forager’s Treasure of Wild Mushrooms withWild Quail and Wild Guinea Hen and White Truffles signals the arrival of fall, and also is a terrific pairing with these two Left Bank classics. 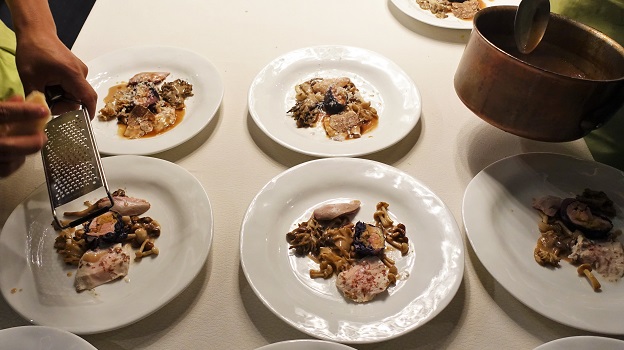 The 2005 Margaux is another wine that is pure magic from the minute it is opened. It is also a wine Steve and I have among our favorites of the evening. The 2005 Mouton is darker and more brooding. Both will age well for decades. Antinori’s 2006, served blind as a mystery wine, shows quite well, even if these aren’t the best bottles I have tasted. Originally I did not want to serve venison, as I thought the meat would be too gamy, but David Bouley convinced me otherwise. What can I say? He was right, I was wrong. 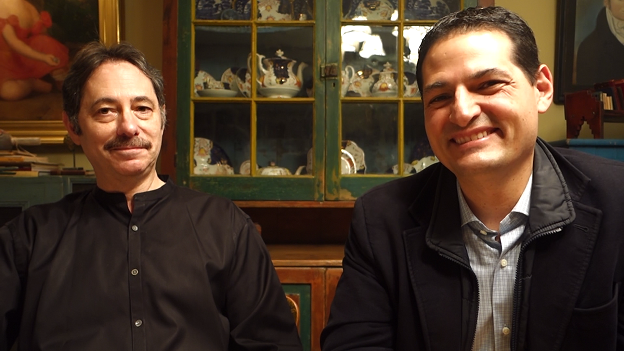 Tasting the 2005 Haut-Brion and Pape Clément side by side is fascinating, as they represent stylistic extremes. The Haut-Brion is classic, while the Pape Clément is unabashedly modern. But there is a certain universality in greatness, and both of these wines are simply stunning. The Pape Clément will mature sooner than the Haut-Brion, but both wines show beautifully on this night. The 2005 Mondotte and Troplong-Mondot, both from the Saint-Emilion’s clay/limestone plateau, are powerhouses. The Mondotte is impossibly closed, while the Troplong-Mondot is ripe, sensual and inviting. David Bouley’s Great Barrington Organic Grass-fed Young Lamb is off the charts. What a dish! 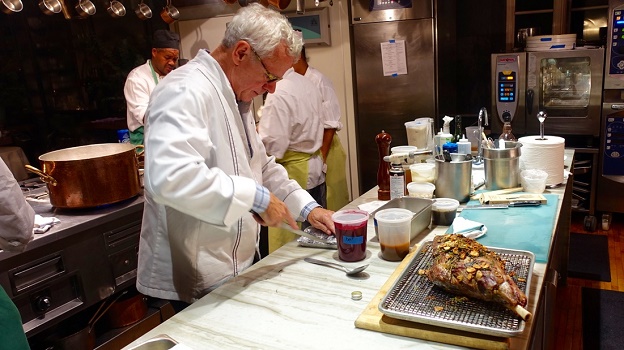 David Bouley getting ready to plate the lamb

In many ways, the best is saved for last. The three wines in the closing flight are all magnificent. I have a weakness for the Cheval Blanc, as it is super-refined, sensual and flat-out stunning. The Pavie and Angélus are of course more powerful wines, but they aren’t too far behind. These are especially fine bottles of the Pavie, which was more forward in a tasting a week prior to this one, while the Angélus is the most tannic of the three, but all of the wines in this flight are superb. 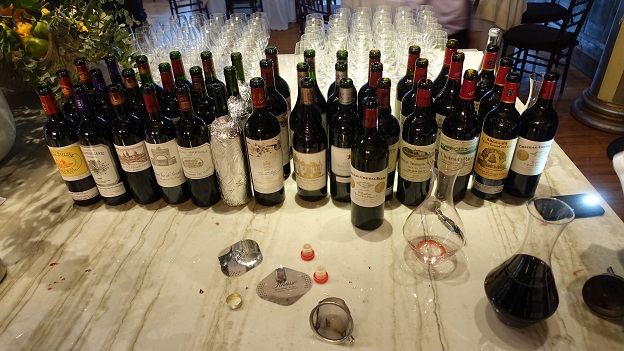 A fabulous lineup of 2005 Bordeaux with a few twists

And now, it’s time to start thinking about tasting the 2006s next year…

View all the wines in the order tasted 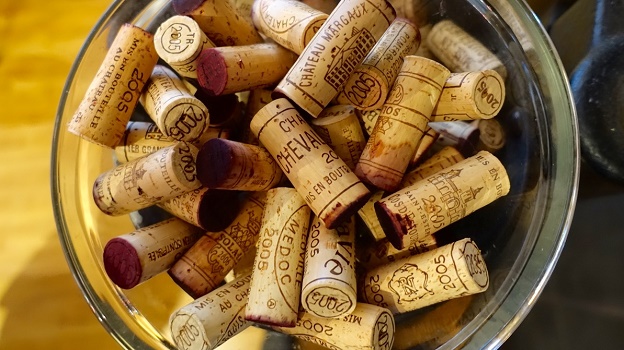