Surprising as it may seem, Italy’s best white wine producer may be a co-operative. Certainly no producer in the country makes longer-lived white wines than the Cantina Terlano. Bottles from the 1950s are still in splendid shape and are pursued by collectors and wine lovers around the world. In fact, Terlano boasts the largest stocks of collectible old whites of any winery in Italy.

While Terlano now routinely sets aside several thousand bottles every year with the aim of putting them on sale four to five years after the harvest, this was not always the case. In fact, it was a practice started in 1954 by kellermeister (chef de cave) Sebastian Stocker in the first year he began working at Terlano. Stocker took it upon himself to squirrel away bottles without telling anyone, for he knew that in those times the co-op’s board would never have agreed to such a move. That’s because in Italy wine had always been looked upon as a source of calories and as a guarantee of a modest income for grape farmers and wineries, and was far removed from its lifestyle or luxury image of today. Clearly, in a country that had long lived through tough economic times and was just beginning to recover from World War II, all wine was made to be sold immediately (for this reason, very few Italian wine producers have any significant stocks of older bottles). And so, thanks to Stocker hiding away hundreds of bottles every year behind a brick wall (some of his original hiding places are still visible today, should you visit the winery), Terlano was blessed with a cache of old bottles that have made its reputation. 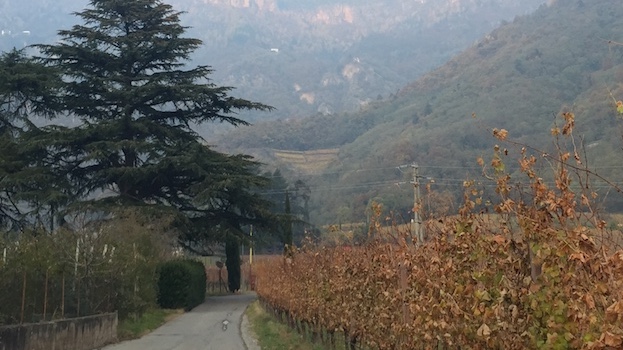 A view from the Terlano winery

Getting to Know Terlano

Located in Italy’s northeast, in the bucolic region of Alto Adige on the border with Austria (Alto Adige belonged to Austria until the end of World War I), Terlano is the name of a town from which the co-operative takes its name. Founded in 1892, the co-op farms 250 hectares, 70 of which used to belong to members of the nearby Andriano social co-op. But when the latter encountered difficulties due to tough economic times, Terlano took over beginning with the 2009 vintage. Thus Terlano now boasts 230 members in all, 70% of whom are Terlano’s own original members.

Like all co-ops, Terlano is not a small operation, which makes its ability to produce extremely high-quality wines all the more impressive. In fairness, there are several other Alto Adige co-ops that make outstanding white wines (Tramin, Nalles-Magré and San Michele Appiano immediately spring to mind), which explains why many wine experts and oenophiles in Italy and abroad consider Alto Adige to be Italy’s best source of high-quality whites. Terlano bottles 1.4 million bottles a year (plus another 500,000 under the Andriano label), sold in several tiers at varying price points. And while Terlano makes brilliant reserve Sauvignon Blanc, Gewürztraminer, Lagrein and Terlaner wines (the latter is an historical local blend, invented by the Terlano co-operative, of roughly 60% to 90% Pinot Bianco, depending on the vintage, plus smaller percentages of Chardonnay and Sauvignon Blanc), and very solid entry-level wines, it is with Pinot Bianco that the co-op reaches a pinnacle of quality that I would argue is not matched by anyone else working with this variety—and not just in Italy, for that matter. 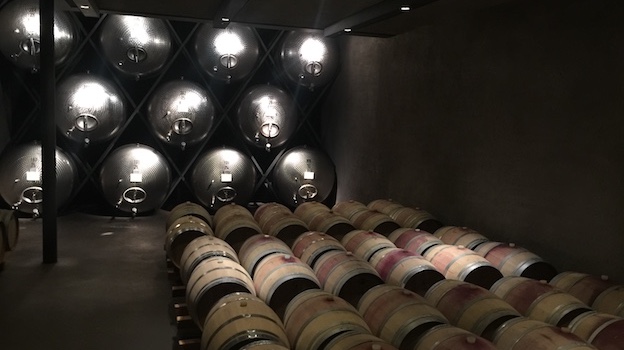 The old and the new in the cellar

Pinot Bianco (or Pinot Blanc in French: different languages but exactly the same grape) is one of the world’s most underrated wine grapes. The variety’s salient viticultural features include potentially copious yields and a compact grape bunch that can turn it into a veritable rot magnet. However, when Pinot Bianco is planted in the right soils and handled by competent people (which in my view immediately excludes anyone subjecting it to new oak, even especially ripe grapes from low-yielding vines), the variety can deliver amazingly refined and long-lived wines that exude delicate aromas and flavors of green or yellow apple and pear, white flowers, chamomile, minerals and beeswax. Quince, almond and a variety of other notes become more apparent as the better wines age. It is precisely due to their subtlety that wines made with Pinot Bianco can easily be overwhelmed by generous use of new oak.

Also very typical of Pinot Bianco wines is an element of mellowness, which translates into an almost sweet quality (even with perfectly dry wines), a tactile and taste sensation to which the variety’s inherent low acidity levels no doubt contribute. A good Pinot Bianco wine will be deep and very long (when made from high yields it will likely be thin and short), with sneaky concentration; in fact, it may resemble a cool-climate Chardonnay, even though Pinot Bianco is always much less endowed with tropical fruit and butter notes.

Pinot Bianco and its wines had fallen on hard times in the ‘80s and ‘90s when fat, buttery, oaky whites were all the rage. But times have changed, and so the variety and its wines are slowly regaining a foothold in vineyards and export markets alike. Look especially for today’s best dry Pinot Bianco wines in Italy’s Alto Adige and Friuli Venezia Giulia, parts of Germany and Austria’s Styria (in Germany and Austria the variety is often referred to by its Germanic name of Weissburgunder). Alsace’s lovely Pinot Blanc wines are in fact not pure Pinot Blanc at all, as most are blends made with 50% or more of Auxerrois, another variety altogether (100% Pinot Blanc bottlings in Alsace are rare). As such, these wines should not be viewed as examples of what Pinot Bianco can deliver. 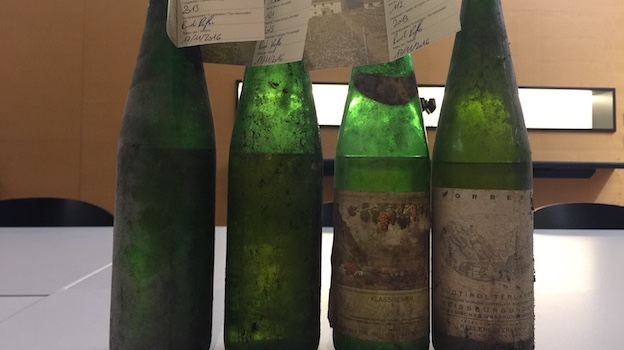 A closeup of some of the older wines in the tasting

Terlano’s soils are mainly composed of porphyry and volcanic elements, with a strong presence of sand and gravel. Pink porphyry rock, in both its quartzite and granitic forms, is especially typical of the Terlano area (but rare elsewhere in Italy), its reddish coloration due to the iron concentration in the soil. Its presence, along with a high content of sand (roughly 60%), means that this is very nutrient-poor soil that diminishes the vines’ inherent vigor, which is obviously a good thing with Pinot Bianco. Clearly, Terlano is an outstanding example of an ideal match of grape variety and environment. The potentially generous Pinot Bianco variety finds itself perfectly at home in Terlano’s poor soils, where it tends to give mineral-rich wines that have uncommon concentration and staying power. In fact, the co-op is now looking into using slightly more vigorous rootstocks (such as 420A) than it has previously, because with the increasing age of the vines, yields are becoming almost too small, and the winery’s goal is to make wines that are not just concentrated and age-worthy, but also refined and easy to drink.

Terlano is also a well-ventilated area, with the Ora del Garda wind blowing north-ward from Lake Garda helping the grapes ripen fully, while night-time winds blowing south from the Alps moderate temperatures and preserve aromatics. This wealth of breezes also helps to greatly decrease disease pressures, which are always a potential problem with Pinot Bianco. Pinot Bianco at Terlano is harvested roughly between September 20 and mid-October, depending on the vintage and on the altitude at which the vines grow. 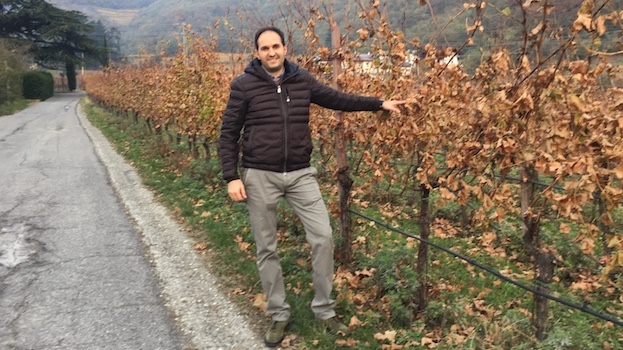 In Italy, nobody does Pinot Bianco better than Terlano. In fact, the variety has always been strongly associated with the Terlano zone, and the co-op makes two different bottlings: the entry-level Weissburgunder and their top-of-the-line Vorberg, a “reserve” that is Italy’s longest-lived dry white wine. Vorberg means “in front of the mountain,” reflecting the fact that the Pinot Bianco vines grow anywhere from 400 to almost 900 meters (1,312 – 2,953 feet) above sea level on the mountainous slopes of the Monzoccolo area of the Terlano DOC (a cool environment is essential for this notoriously low-acid grape).

The vines average 25 years of age (Terlano’s oldest vines are about 40 years old), and most are clonal selections from the famous Laimburg school of viticulture and research center. Clones LB 16 and LB 18 are the most planted at Terlano (LB 16 is a bit too productive and is being slowly phased out); not surprisingly, over the years clonal selection has been directed to obtaining Pinot Bianco clones that are not just lower yielding but characterized by looser bunches as well. In order to reduce yields and get tighter bunches, Terlano also practices two different green harvests: the bunches are cut literally in half around the end of July (with the precise timing depending on the vintage) even before veraison (the grape’s color change), while a second green harvest is performed roughly three weeks before the grapes are to be picked, aiming for yields of roughly 45 to 50 hectoliters per hectare. These two interventions serve to reduce overall yields by at least 30%.

Winemaker Rudi Kofler has been with the co-op since 1999 and has been Terlano’s head winemaker since 2002 (he actually lives in an apartment within the co-op’s main building). Kofler studied at the Istituto Tecnico in Ora, then apprenticed under Hans Terzer, kellermeister at San Michele Appiano and arguably one of Italy’s greatest winemakers of all time. Kofler’s style is one of vertical, high-acid wines. Grapes are manually harvested and selected, put through gentle whole-cluster pressing, and fermented in large, temperature-controlled 30-hectoliter used oak barrels. Kofler avoids skin contact and likes to age the Vorberg in neutral old barrels ranging from 30 to 70 hectoliters in capacity for about a year (barriques at Terlano are used only for the aging of red wines) and then keeps the wine on its fine lees in 2,500-liter steel tanks for anywhere from 4 to 30 years. (Terlano now also periodically releases small quantities of wines that have been kept at least 10 years on the lees as part of their “Rarità,” or rarities, portfolio of library wines.) Depending on the vintage, Vorberg may go through full, partial or no malolactic fermentation at all.

The first vintage to carry the Vorberg name was the 1993 (it was Stocker’s last wine before retiring) but a reserve-style Pinot Bianco wine was in fact already being made decades earlier. Upon taking over from Stocker as Terlano’s winemaker in 1994, Hartman Donà (the winemaker who preceded Kofler), along with Terlano’s marketing and sales director Klaus Gasser, decided it was time to give their top-quality Pinot Bianco a name. And so in 1993 the best lots of Weissburgunder were renamed Vorberg, with the word “Riserva” added in the 21st century to fully emphasize the wine’s age-ability. The addition of “Riserva” was deemed necessary because until recently virtually nobody in Italy wanted to buy white wines that were more than a couple years old; in fact, Gasser told me that anything older would go unsold. By adding “Riserva” to the wine’s name, the folks at Terlano were able to get Italians to try the white wine with a little age on it. In fact, Vorberg almost always shows best about four to five years—at the least—after the vintage date.

The wines in this report were tasted at Cantina Terlano in October 2016, except for the 2004 and 1979, two excellent vintages that I bought on release and pulled from my cellar especially for this tasting. All of the wines were in pristine condition. Remarkably, for a series of older wines, only one bottle showed signs of cork-related taint. The wines improved greatly with aeration, so don’t hesitate to let them develop in your glass.