Cristal in Magnum: It’s Another World

I have had a number of unforgettable and deeply educational tastings at Roederer over the years. This was one of the most fascinating. It is well known that wines show better from magnums. That is especially true with Champagne. But why? Roederer’s long time Chef de Caves Jean-Baptiste Lécaillon pulled out a remarkable selection of Cristal and Cristal Rosés earlier this year to show exactly why.

The obvious reason why Champagne shows so well from magnum is that while glass is a storage vessel for whites and reds, it is also, importantly, a fermentation vessel for Champagne. After the vins clairs have been assembled into blends, they are bottled the spring of the following year, with a touch of yeast, sugar and liqueur de tirage, that creates the secondary fermentation, and the bubbles. That much is pretty simple to understand, but there is more to it.

“In tirage, we add a bit less sugar to the magnums than the bottles to lower the pressure under which the wines undergo the secondary fermentation in magnum,” explains Lécaillon. “We do this because the wines really struggle through the secondary fermentation, which takes two weeks longer than in bottle because there is less oxygen. As a result, we have more residual sugar – 1 to 2 grams per liter, as opposed to virtually dry for the bottles, and that produces a lot more glycerol, giving Champagnes from magnum a richer textural feel.” 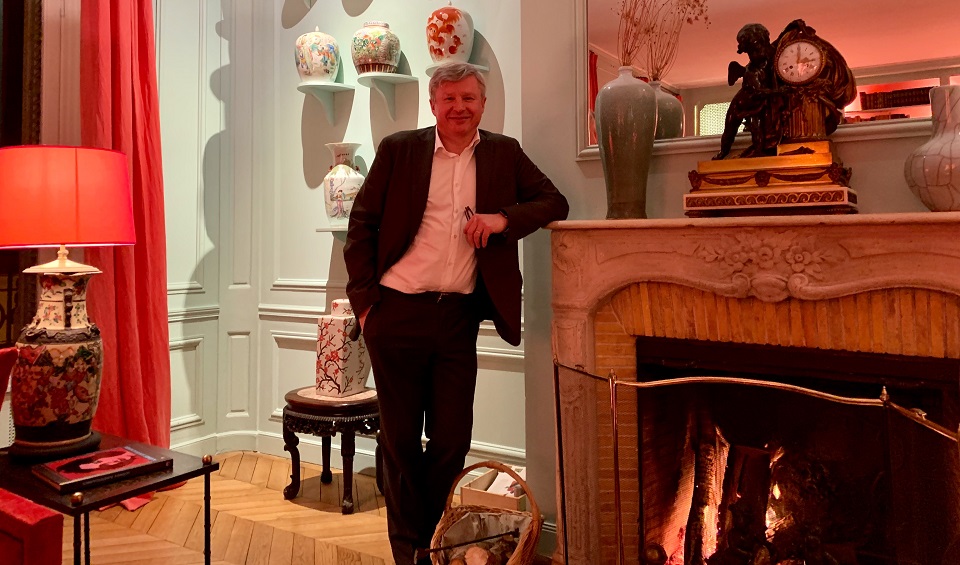 Lécaillon pulled out an extraordinary collection of magnums for this tasting held earlier in the year in Reims. “The best year of each decade,” he said. I imagine 2008 was excluded simply by virtue of being way too young in magnum and Cristal Rosés from the 1970s are painfully rare. (Readers will find plenty of notes on those wines in our database). So, that meant Cristal 2002, 1996, 1988 and 1979, followed by Cristal Rosé 1995, 1989 and 1982.

I was simply blown away by the wines, not just because of their quality but because of how different the magnums show from the regular 750ml bottles. The first two magnums really sum up the main takeaways from this tasting. In the warm vintage (2002) the magnum format seems to confer greater freshness, while in the cooler vintage (1996), the magnum adds weight and body. It’s absolutely fascinating. A number of the wines in this tasting were from late disgorgements, a topic that in and of itself would make for a compelling tasting and article, as the longer time on the lees has a material effect on how Champagnes show. That is especially true with Cristal and Cristal Rosé, which only spend 6-7 years on their lees and are almost always the first of the top tête de cuvées to be released.

Before delving into the wines, let me just say that writing an article on Roederer is always a challenge because there is so much to say on so many topics. I encourage readers to check out my previous articles Cristal – The 1980s…A Decade of Change, Roederer Cristal: That ’70s Show and Roederer Cristal Rosé: A Journey Through Time for more historical background. That said, a little context might be helpful here for readers who aren’t familiar with these wines.

Roederer is one of the most established houses in Champagne. It is also one of the most forward-thinking. Among his many achievements, Lécaillon has spearheaded a total commitment to sustainable farming. Today, all 122 of the estate’s vineyards, the sites used for Cristal, Cristal Rosé, Blanc de Blancs and Brut Nature are farmed either organically or biodynamically. “It was easier when we started out, comparing conventional to organic approaches,” Lécaillon told me recently. “The differences between organic and biodynamic are much smaller.” Lécaillon first implemented new farming practices with Cristal Rosé, Roederer’s smallest production wine. The first Cristal Rosé made fully from organic/biodynamically farmed grapes was the 2007, while for Cristal it is the 2012, which is just being released. All of the wines in this tasting predate the current philosophy with regards to farming. Needless to say, a comparative tasting of Cristals made from conventionally farmed grapes versus organically/biodynamically farmed grapes will make for some pretty interesting conversations in the future. 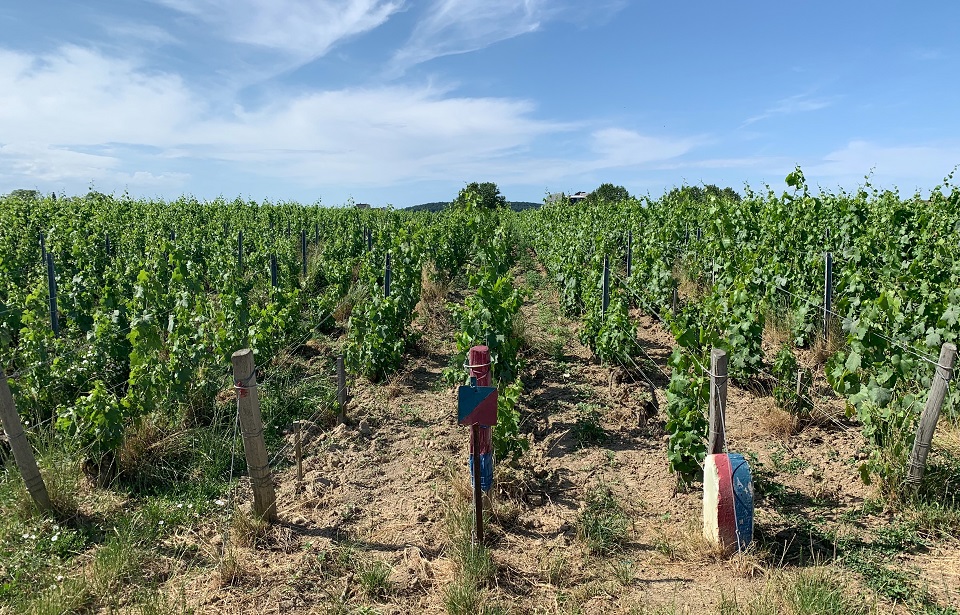 Pierre Vaudon in Avize is a core parcel for both Cristal and Cristal Rosé. Roederer farms half of this parcel organically and the other half biodynamically with the goal of gaining a deeper understanding of both approaches

Cristal is typically 60% Pinot Noir and 40% Chardonnay sourced from a collection of estate vineyards in Verzenay, Verzy, Beaumont-sur-Vesle, Aÿ and Mareuil-sur-Aÿ for the Pinots, and Avize, Mesnil and Cramant for the Chardonnays. In most vintages, Cristal is made from about 45 different plots, although it can be less than that, or in some cases, notably 2018, more. The backbone is comprised of 20-25 plots that make the blend in most years. These include Pierre Vaudon in Avize; Volibarts, Montmartin and Marvillanes in Mesnil-sur-Oger; Voie d’Epernay in Cramant; Champs Romés in Verzy and Basse Coutures, Pisserenarde and Les Rochelles in Verzenay.

Cristal Rosé is a much smaller cuvée with a shorter history than Cristal, but an equally stellar track record. It is approximately 55% Pinot Noir and 45% Chardonnay sourced from just three parcels Bonotte Pierre Robert in Aÿ for the Pinot and Montmartin in Mesnil-sur-Oger and Pierre Vaudon in Avize for Chardonnay. Jean-Claude Rouzaud, the grandson of Camille Olry Roederer, joined his family's winery in 1967 and started experimenting with a Rosé version of Cristal in 1970. His vision was to create a Rosé that was totally unique, with intense fruit and body. For Cristal Rosé, the Pinot is given a cold soak lasting from 5-10 days. As the juice starts to ferment, it is added to the fermenting Chardonnay tanks in a sort of infusion that Rouzaud sought in order to fully integrate the Pinot Noir with the Chardonnay. The first vintage was 1974, still a magnificent Champagne the last time I tasted it a few years ago. 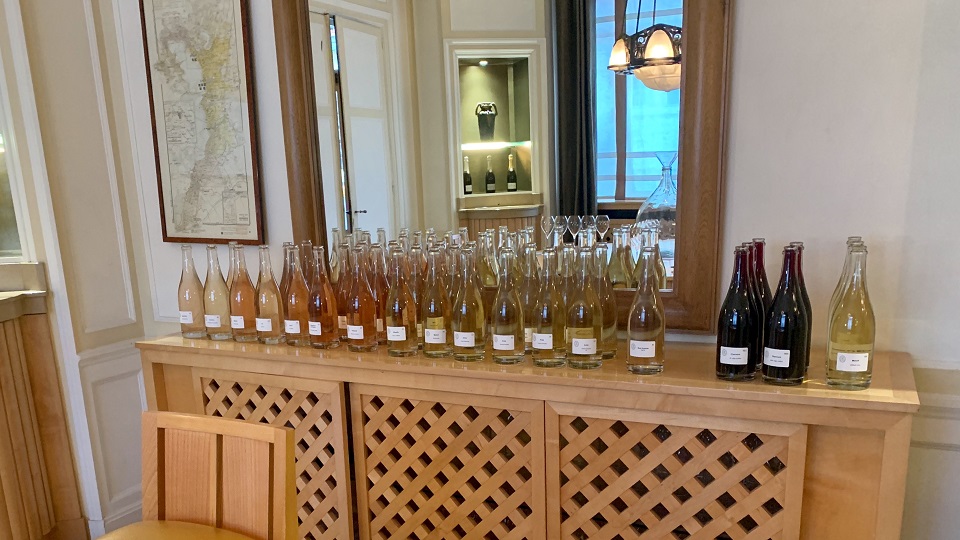 The 2002 Cristal (magnum) is off the charts. In magnum, the 2002 shows a bit less of the opulence and richness it presents in bottle, which is not at all a bad thing for a vintage that has so much natural exuberance. Creamy and exquisitely layered in the glass, the 2002 is wonderfully expressive today, not to mention incredibly inviting. Dried flowers, mint, Mirabelle and wild flowers give the 2002 captivating inner perfume and tons of sheer allure. This is the original 2009 disgorgement. Dosage is 9 grams per liter, lower than was once the norm here, and the result of a combination of factors including climate change, generally riper fruit and a warm growing season. One of the many highlights of the afternoon, the 1996 Cristal Vinothèque (magnum) exudes a level of richness and intensity that is simply breathtaking. That extra kick of richness the 1996 has developed in magnum and over extended time on the lees is pure magic in balancing some of the natural austerity of the year. What comes through is a Champagne of unforgettable profoundness. Smoke, crushed rocks, white flowers, mint and finely sculpted citrus confit/orchard fruit add striking layers of dimensions. The 1996 is so bright and so alive in the glass. A whole range of Chardonnay inflections punctuate the finish. This is a late disgorgement from 2009, with disgorgment of 8 grams per liter.

The 1988 Cristal (magnum) is a wine of exquisite beauty and total refinement. Chardonnay drives the balance in a deep, vertical Champagne endowed with tremendous concentration and pure power. Lemon confit, wild flowers, mint and marzipan are some of the many notes that lift from the glass, but what stands out most about the 1988 is its extraordinary aromatic breadth and the sheer concentration of the flavors. “I really suffered with these wines," Lécaillon told me. “When I joined Roederer in 1989, these were the first vins clairs I tasted. I almost said: ‘I’m leaving. I can’t do this all my life.’ The wines were so hard to taste when they were young. So hard.” This is a late disgorgement from 2007. There is not a whole lot of doubt that nearly 20 years on the lees has transformed Cristal in magnum from a profound wine to something even more extraordinary. The 1988 is a rare Cristal in which Chardonnay drives the blend, composed of 54% Chardonnay and 46% Pinot Noir.

A totally breathtaking Champagne, the 1979 Cristal (magnum) is exotic and stunningly beautiful. Remarkably vivid for a wine of its age, the 1979 is simply emotional. White flowers, orchard fruit, graphite, tangerine oil, spice, dried fruit and citrus confit are some of the many notes that emerge from this spectacular, vibrant Champagne. From magnum, the 1979 is quite a bit fresher than bottle, which is hard to believe, as the bottles are magnificent. The 1979 is just a life-affirming wine. Moreover, it clearly harkens back to another era in Champagne, a time when vineyards were older and before the arrival of new clones and heavy fertilization strategies aimed at increasing production. On paper, 1979 should not have been a great year,” Lécaillon said. “It’s a super complicated vintage. When I went back to the vin clair notes from just after harvest, which I did recently, they all read ‘bitter, bitter, green, bitter.’ And then the wine ends up like this. I can’t explain it. You know, back then we used a lot of taille (second pressing), 10-15%, and it worked. Today, everyone says ‘I just bottle the cuvée, the taille is not interesting. I am using taille more and more. You know, taille is the juice you get closer to the skin, and in some years, it carries a lot of aromatics,” Lécaillon explained. “I think the future of wine is coming back to what is classic. The perfect imperfections," he adds. This is the original disgorgement from 1985, with dosage of 12 grams per liter, typical of the era. 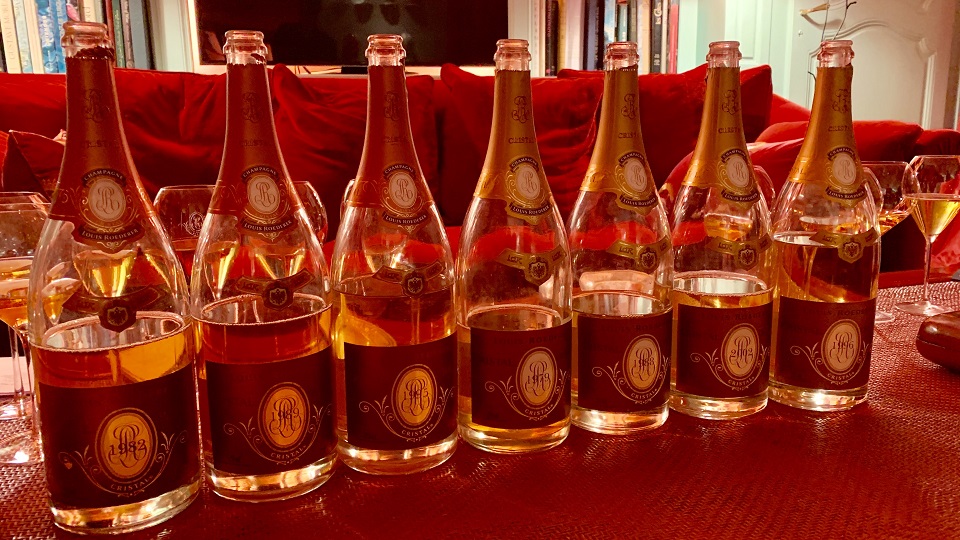 A stunning line-up of Cristal and Cristal Rosé, all from magnum

The 1995 Cristal Rosé Vinothèque (magnum) is soft, silky and very easy to enjoy. A Champagne with striking aromatic presence and no hard edges, the 1995 is all about subtlety, nuance and understatement. The pedigree and structure of the greatest vintages isn’t there, but in exchange the 1995 is wonderfully alluring and simply impossible to resist. This magnum is a late disgorgement from 2007. Longer aging on the lees naturally adds texture, which led Chef de Caves Jean-Baptiste Lécaillon to opt for 7 grams per liter, very low by Roederer standards.

An explosion of aromas, flavors and textures emerges from the 1989 Cristal Rosé (magnum). In this warm vintage the Pinot is especially evident in the wine’s intensity, color and sheer breadth. A Champagne of striking inner perfume and sweetness, the 1989 caresses the palate with stunning depth and seemingly endless resonance. Sweet floral and spice notes lead into the creamy, exquisitely beautiful finish. What a surprise and what a wine! Moreover, the 1989 appears to still be ascending. In this tasting, it is just riveting. It’s as simple as that. This is a 2002 disgorgement. The 1982 Cristal Rosé (magnum) has now settled into a relaxed plateau of maturity. Candied orange peel, mint, spice, crushed flowers and star anise give the 1982 a distinctly exotic, beguiling personality that is impossible to miss. I would prefer to drink the 1982 sooner rather than later, as it is not going to improve from here, although it may very well stay in this spot for a number of years.  This bottle is late disgorgement from 2002.