There are moments in life when you immediately realize you have stumbled upon something or someone special. And so it was for me when I first met Salvatore Fucci back in the spring of 2002. I was introduced to him by Vito Paternoster (of the Paternoster estate) and found the then middle-aged physical education teacher likeable, humble, very sensible in his approach to winemaking, and, most importantly, very proud and knowledgeable about the Vulture volcano and its great variety, Aglianico. Fucci was born into a family that had a long tradition of winemaking but had never estate-bottled before. I was meeting him that day to taste the first vintage bottled under his own label. One taste of his 2000 Aglianico del Vulture made an instant believer out of me. It was already clear back then that this fledgling winery was able to produce wines that were cleaner, deeper and more refined than almost any other wine being made on the Vulture at that time. 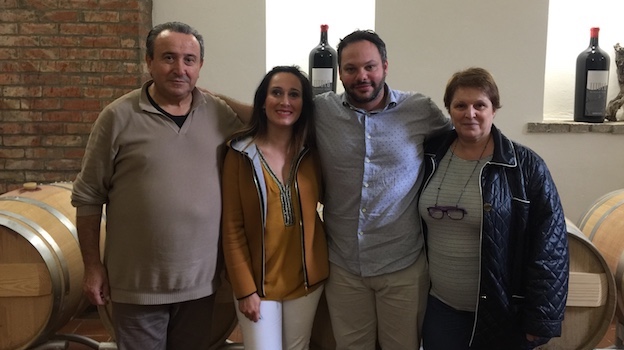 Elena Fucci with her parents and husband Andrea in the cellar

The Estate and its only Wine

The Elena Fucci estate is relatively young by Italian standards, but its wines have met noteworthy critical and commercial success over the years, so much so that the estate now ranks with Italy’s wine nobility. Prior to Salvatore’s decision to set out on his own and estate-bottle his wine, the family had always sold their grapes to Paternoster, one of the Vulture’s most famous and storied estates. In fact, the Fucci and Paternoster families have always been close: Elena’s grandfather Generoso was Paternoster’s chef de culture for the better part of his professional life, and the two estates are literally a stone’s throw from each other. You can gaze at the Elena Fucci vines from the Paternoster estate’s beautiful balcony. The winery is currently run by Salvatore’s daughter Elena, who studied winemaking at Pisa, and her husband Andrea, who oversees sales, with Salvatore pitching in as needed. The estate makes only one wine, about 25,000 bottles annually, of its Aglianico del Vulture Titolo, which is one of only a dozen or so southern Italian reds actively pursued by international wine collectors. 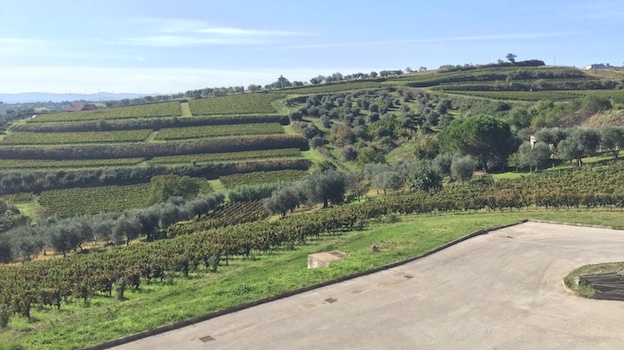 Aglianico del Vulture is potentially one of the world’s—not just Italy’s—greatest wines and no single bottling demonstrates its quality better than the Titolo. It helps that the Titolo vineyard is probably the best vineyard of the Vulture denominazione, a true Grand Cru (if such classification existed in Italy!) uniquely blessed with a fresh microclimate. Fucci owns 6.7 hectares (16.5 acres) of 55-to-65-year-old Aglianico vines (a few are well over 70) in the Titolo vineyard located in the subzone Solagna del Titolo from which the vineyard’s name is derived. Only six hectares are currently planted, but Elena Fucci told me she plans to plant more vines shortly.

As the vineyard is situated close to the volcano’s summit at approximately 600 meters (roughly 2,000 feet) above sea level, an almost continuous cooling breeze blows from the top of the hill down the slope through the vines. This air movement contributes greatly to the relatively cool environment of the Titolo vineyard. The soil here is also slightly different than that found in other parts of the denomination. While it’s essentially volcanic, there are pockets of loam and clay sandwiched between the layers of lava that were formed during eruptions that occurred over eons. Thanks to the soil’s capacity for good water retention when needed, the vines rarely suffer from water stress. 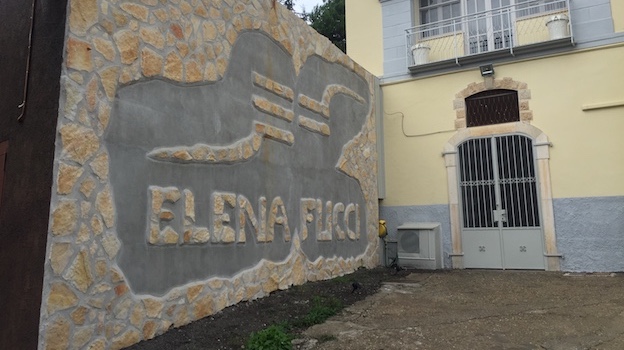 The new entrance at the Elena Fucci estate

Winemaking Technique and the Style of the Wine

Winemaking is fairly traditional but with modernist touches. For example, fermentation temperatures never exceed 24 degrees Celsius (75 degrees Fahrenheit), and this may partly explain the strongly perfumed quality of Fucci’s wines. The wines are aged for about 12 months in small oak barrels, depending on the vintage, but the oak regimen has changed in recent years. The last vintage to feature 100% new oak barriques was 2008, and the estate is now making use of larger oak casks as aging vessels. 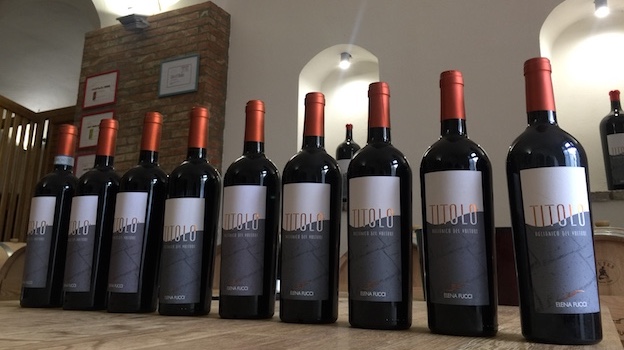 I have followed the Elena Fucci wines from the very beginning, and I find them to be powerful yet remarkably refined, with deep aromas and flavors of red cherry, minerals and botanical herbs obvious in most vintages. The oak is always marvelously integrated. While the wines undoubtedly reflect each vintage’s unique conditions, they also always display a suave mouthfeel that is Titolo’s true signature. The rustic notes that plague many of the Vulture’s other Aglianico bottlings are notably absent. Titolo’s element of refinement may be relatively subtle in some vintages (for example, in 2004), or much more apparent in others (such as 2002), but it is always present and easy to spot. My recent vertical tasting also demonstrated, one more time, the incredible consistency that Fucci is able to achieve vintage after vintage. Even in difficult years such as the rainy 2002 growing season or the hot drought year of 2003 (both of which were less extreme on the Vulture than in the rest of Italy), the wines are a major success. Wine lovers owe it to themselves to hunt down Fucci’s knockout Aglianico del Vulture Titolo, as it ranks with the best that Italy has to offer.

The majority of the wines in this tasting were sourced directly from the estate’s cellar or from my own; the 2000, 2001, 2002 and 2003, which I purchased at the time of their release, were unavailable at the winery and so I pulled the bottles from my own collection. I tasted the wines in September of 2016 during one of my annual forays to Basilicata’s wine country.