Based on my tastings this spring and last, Napa Valley’s 1995 Cabernets don’t quite match the ‘94s for their density, suavity of texture and overall balance. But the up-and-down 1995 growing season was nonetheless an outstanding vintage, having produced many aromatically complex and ageworthy wines.

A Year of Weather Extremes

Nineteen ninety-five began with flooding winter rains, with the nearly 50 inches of precipitation that fell in the first three months of the year coming down in January and March. Clearly, if ever Napa Valley had water reserves to carry it through its normally dry summer, 1995 was the year. Temperatures were cooler than average in March, April, May and much of June, with higher-than-average rainfall in all of these months. Bloom was quite late for Cabernet, taking place in June, with a rare hailstorm on June 15 delaying the flowering and reducing yields in affected vineyards. The first significant heat spike of the season occurred in late June.

July, August and September were then bone-dry and cooler than average on the whole, but with wildly uneven temperatures and several short heat spikes that could be especially intense on the valley floor. The veraison was also very late, extending into early September, and growers worried that fall rains would arrive before they finished their harvest. Happily, early autumn brought very good weather and the Cabernet harvest generally took place through the month of October, under mostly warm conditions. In fact, October was the first month of the growing season with temperatures higher than the preceding ten-year average. Long hang time, assuming that the grapes get ripe in the end, which they did in 1995, goes a long way to ensuring full flavor development, deep colors and ripe tannins, not to mention the balance and structure to support extended aging.

While few growers at the time described the growing season conditions as ideal, 1995 produced firmly structured, aromatically complex wines which many producers and critics ranked in quality in the same league as the 1994s, even if they were generally firmer in the early going and less suited for quick enjoyment. Both growing seasons were cooler and longer than average and stand out for their intensity and depth of fruit. 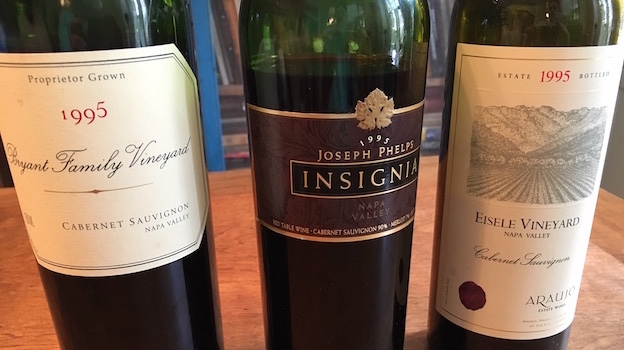 I tasted a group of 1995s at Napa Valley Vintners in St. Helena in March, then followed up in recent weeks by sampling several more wines chez moi, some provided by the wineries and some pulled from my own cellar. (In one case, I inserted a note on a 1995 that I tasted in the spring of 2015.) The cult wines from 1995, as you might expect, are quite hard to come by, and, like the 1994s, have become expensive collectibles. And, of course, many of today’s most exciting Cabernet- based wines did not yet exist in 1995. As I noted last year in my report on the 1994s, in the early to mid-‘90s, no wines had yet been released from producers like Blankiet, Bond, Hundred Acre, Kapcsándy, Scarecrow, Sloan and Verité.