As the 2011 Napa Valley Cabernets reached the ten-year mark, revisionist thinking about the wines started to surface. Had the Cabernets of this much-derided vintage turned out better than expected? Absolutely not! The top 2011s were always gorgeous. Today, with the added benefit of bottle age, the best 2011s are showing especially well.

Let Me Know if You Need Anything, and Good Luck!

It just so happens that 2011 was the first harvest I witnessed firsthand in Napa Valley. At the end of 2010, Bob Parker asked me to take over the coverage of Napa Valley wines for The Wine Advocate. It was the first time Bob had given one of his key regions to another critic. I was fairly terrified at the awesome responsibility of following Bob in Napa Valley.

A few weeks later, a small package arrived. It contained a book on Napa Valley someone had sent to Bob (I don’t remember whose) and his schedule of appointments from the year before, on paper of course, with addresses and phone numbers, but no emails. Typical Bob. A yellow Post-It was affixed to the schedule. It read: “Let Me Know if You Need Anything, and Good Luck! Bob.” That was it. That was my introduction to the job.

Somewhat unexpectedly, Bob invited me to taste the 2001s that May, but I will save that story for my upcoming 20-year retrospective. Back to Fall 2011. Not knowing what to do, I simply replicated Bob’s schedule. Exactly. I stayed in the same place and was even put in the same room, a room that Bob liked because it had a private parking spot. From there, I watched harvest unfold over sixteen days of non-stop tastings. 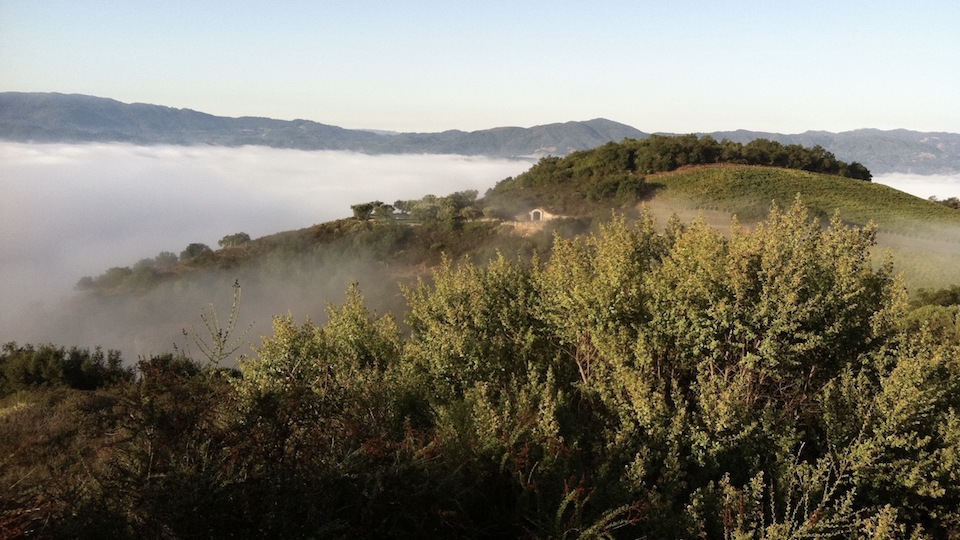 The fog inversion as seen on Pritchard Hill, October 2011.

The growing season got off to a pretty rough start, with incessant rains in June that caused irregular flowering. There was not much heat or sun to speak of, while disease pressure was a constant.

Fall mornings in the valley were heavily fogged in and damp. Not exactly classic Napa Valley harvest weather. Many winemakers were pretty stressed out. With the exception of those who had worked in Europe, no one had ever seen botrytis on red grapes, and the speed with which it could spread. “I have never seen botrytis move so fast,” Tod Mostero told me at Dominus. We picked the 90% of the ranch in less than a week.” French winemakers, on the other hand, were pretty relaxed. The late Denis Malbec and Philippe Bascaules, who just arrived at Inglenoook from Château Margaux, were non-plussed. They had seen conditions like these in Bordeaux. “We will take anything we don’t like out at the sorting table,” Malbec explained at Blankiet.

One day I had appointments on Pritchard Hill. As I drove up Long Ranch Road on my way to Colgin, the fog was all of the sudden replaced by clear, sunny skies and pristine vistas as far as the eye could see. I got out of my car and was shocked to feel how much warmer it was in the hills. This was my introduction to the role of elevation in Napa Valley. It was the first time I started to understand that Napa Valley is better described as a valley flanked by mountain ranges connected by transitional benches on both sides, like a five lane highway. Suddenly, I realized that the wines from this vintage would be very different depending on site, and that vineyards at elevation might turn out to have a significant advantage. That led to my interest in creating a set of narrative vineyard and appellation maps that could tell this story.

In the cellar, winemakers were resourceful and also quite judicious. “I used everything in my toolbox,” Celia Welch opined. Interestingly, winemaking choices were quiet varied. Some felt delicate skins called for short ferments and cool temperatures, while others opted for high temperatures to extract as much as possible. Co-fermentations, tannin additions and lees stirring are some of the techniques winemakers used to give the wines more body. Some opted to bottle earlier than normal. Readers who want to learn more about the growing season find more information in my article 2011 Napa Valley Cabernet Sauvignon: Terroir Matters, first published in November 2013.

A year later I came back and tasted the 2011s from barrel. I found many wines compelling, as readers who want to revisit those notes can see. I am not the biggest fan of points or the 100-point scale because it oversimplifies both a winemaker’s work and the thought a serious critic has put into a review. Nevertheless, the 100-point scale does force critics to take specific views, for which we are then accountable in the future. As it should be. 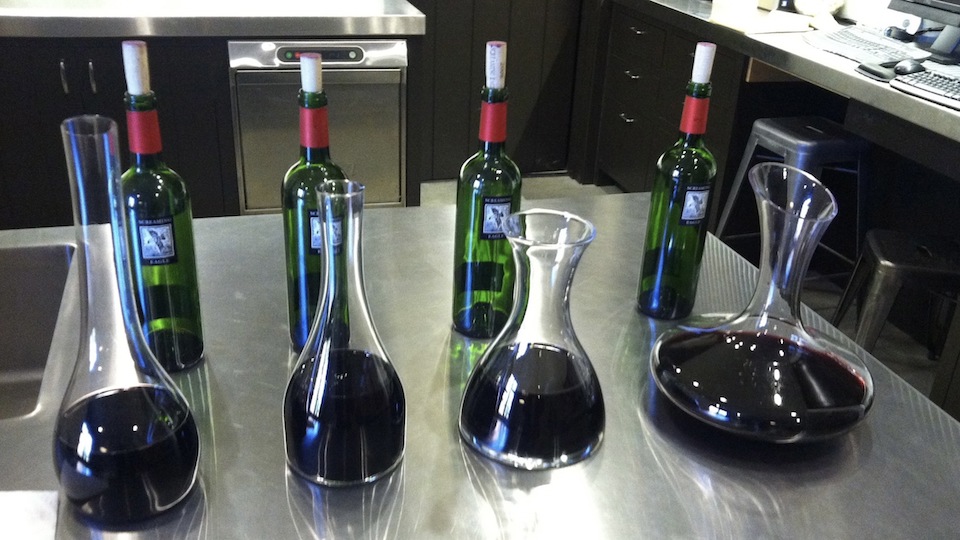 Tasting the 2011s at Screaming Eagle. Evidently, I also tasted a few other vintages, but I don’t remember which.

In my opinion, three things have changed with assessments of the 2011s. First, wines are much easier to evaluate once they have been in bottle for a few years compared to when they are tasted from barrel or when they have just been bottled. Second, the passage of time diminishes the collective memory of how negatively 2011 was perceived at the outset. On this point, I have to say that at times there is very little original thinking in wine. Maybe that’s true in life in general. It was pretty clear to me at the outset that there would be some special wines in 2011, regardless of what anyone else thought, and there are. It was the same thing the year before, in 2010, when some observers wrote off the vintage before tasting the wines. Last, but certainly not least, tastes have changed over the last decade such that Cabernets with mid-weight structure and strong savory qualities are more appreciated today than they were ten years ago. 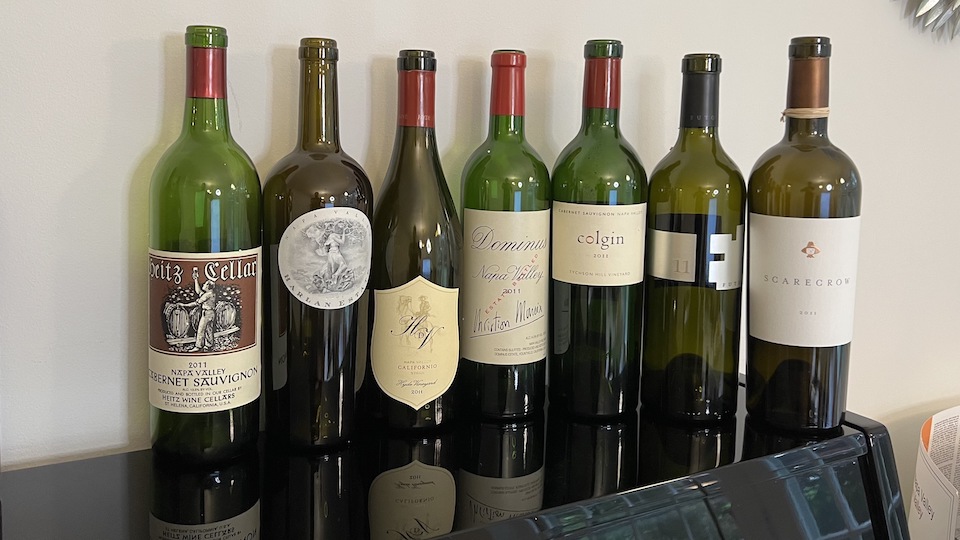 The 2011s have not developed into something they weren’t at the outset. With a few exceptions, these are mid-weight wines, within the context of Napa Valley at the time. The 2011s are intensely aromatic and savory to a degree that was uncommon a decade ago. I only tasted a few wines I would describe as unattractively vegetal. Most wines have aged well and also lived up to my original reviews, but there are some 2011s that need to be drunk now. While it is not the focus of this report, 2011 is a terrific vintage for Syrah and white wines.

I tasted most of the wines in this report during estate visits in September and October 2021, with a handful of follow up tastings in our New York offices in early 2022. Although the focus is Napa Valley Cabernet, I also included a few Sonoma wines I tasted around the same time.

Multimedia: A Conversation with Philip and Lisa Togni, October 2011