I tasted more truly exceptional wines from the Santa Cruz Mountains this year than at any time over the past decade. The 2018 Pinots are utterly breathtaking, while the 2017 and 2016 Bordeaux reds and 2016 Rhônes aren’t too far behind. I have long believed that the Santa Cruz Mountains is one of the world's preeminent regions for fine whites and reds that speak of place. These new releases certainly make a statement.

The Current State of Affairs

That’s the good news. At the same time, I have to tell you this is one of the most difficult articles I have ever written. While this report contains many compelling wines from a number of estates, I am writing these words during one of the most difficult harvests California has ever seen. Dry weather, high winds and lightning proved to be a perfect storm that ignited numerous fires across the state. In the Santa Cruz Mountains the fires have been devastating. Some wineries, such as McHenry, burned to the ground. Many residents lost their homes, including winemaker Bradley Brown and members of his team. Others, like Rhys, were evacuated and miraculously escaped what could have been catastrophic damage. Among these harrowing tales, the words I heard most often were “it could have been worse.”

Over the last few years I have visited a number of properties that have burned, including Signorello and Mayacamas in Napa Valley, and Brown’s home, all places where I once tasted. There is a feeling of loss and sadness in returning to those sites that is beyond my capacity to describe with words, but it is very real. The personal situations people are dealing with right now are, frankly, unfathomable. All of us at Vinous extend our deepest sympathies to everyone who has been affected by the fires.

It seems pretty obvious at least some of the 2020 vintage will be lost to smoke taint. Even here, though, there are challenges. Labs are now so backed up that the amount of time required to receive test results is several weeks, as long as a month in some cases. Obviously, that data will be useless as a decision making tool by then. Winemakers have resorted to extraordinary means, including sending their samples around the world to countries such as Australia for testing. The fires were especially damaging in the areas around Rhys and Big Basin, which is to say the part of the Santa Cruz Mountains that is to the west of the San Andreas fault. Properties to the east, including Ridge and Mount Eden, have mostly had to deal with smoke, but not fire. 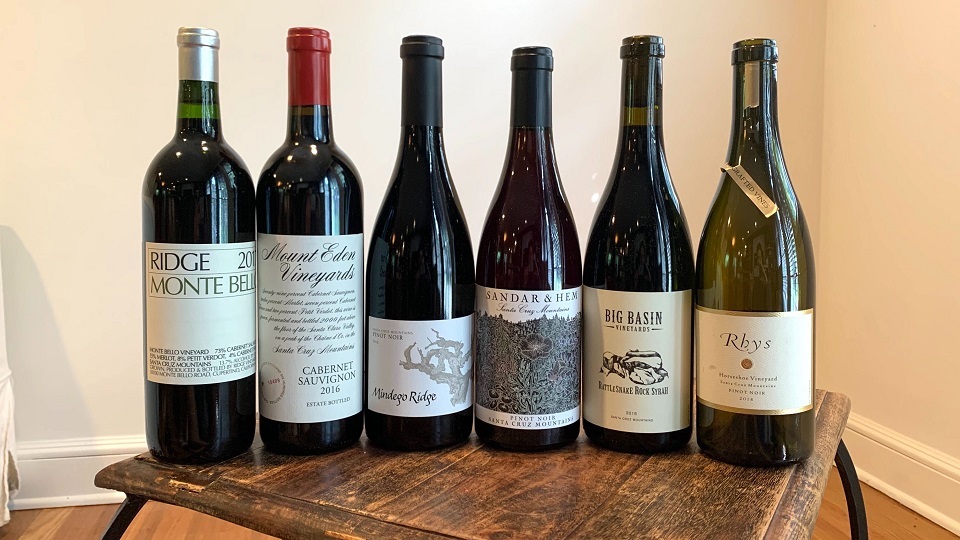 The Santa Cruz Mountains were created by the collision of the Pacific and North American plates many millions of years ago, resulting in a complex latticework of geologies and sites that are just beginning to be understood from viticultural and winemaking perspectives. The San Andreas Fault divides the Pacific plate, which is marine-influenced, cooler and ideal for Burgundian and Rhône varieties, from the North American plate, which is warmer and therefore also suitable to Bordeaux varieties. Elevation is another distinctive aspect that differentiates the Santa Cruz Mountains from other regions around the world. Ridge, for example, which is a collection of four ranches, provides fascinating case studies on the impact of altitude within a relatively small area. I hope we will have a chance to create a Vinous Map for the Santa Cruz Mountains at some point in the future that further explores these topics.

The 2018 growing season gave growers a break from the stresses of 2017. Weather was mild and cool pretty much the entire year, with good rainfall and no shock events to speak of, leading to a long, relaxed harvest. Not surprisingly, that is exactly how the 2018s taste – relaxed. The 2018s are endowed with terrific aromatic complexity, bright acids and superb delineation. It is a vintage that seems to favor Pinot Noir and Chardonnay over Cabernet Sauvignon and Bordeaux varieties, but only by a hair. In particular, the best 2018s Pinots are off the charts wines readers will not want to miss.

Two thousand seventeen was a turning point, as heavy rains during the winter began to erase a heavy water deficit that had accumulated over the preceding years. Consistent downpours created considerable havoc, closing roads and limiting access throughout the region. Cool, wet weather also delayed the start of the vegetative cycle. A massive Labor Day heat spike created issues in many regions in California, but was actually a blessing for the Santa Cruz Mountains, which benefitted from the extra kick of heat to achieve full ripeness. The wines are decidedly extroverted, but also very well balanced. Only a few wines show adverse effects of heat, and those tend to be wines from sites that were very close to being harvested when the heat arrived.

A Conversation with Kevin Harvey and Jeff Brinkman of Rhys, Antonio Galloni, July 2020