With its undulating hills and striking contours, Kamen is one of the most evocative estates in Sonoma. The vineyard is just a short drive from the town square, yet it feels very remote. Screenwriter Robert Mark Kamen bought his property in 1980, mostly for the views, as he tells it. “I had just sold the screenplay for The Karate Kid and I wanted to celebrate,” Kamen told me recently.

At the time there was no road, no electricity and no power. It is hard to imagine how anything at all was developed back then in such rugged terrain. Vineyard manager Phil Coturri planted the first vineyards in 1982, 34 acres of Cabernet and a bit of Sangiovese, on a large, expansive ranch that covered 300 acres. Coturri was an early advocate for organic and biodynamic farming at a time when sustainable approaches to viticulture were considered well outside the mainstream. Today, that expertise has made Coturri one of the most sought-after vineyard managers in the United States. Sadly, a large part of the property was destroyed in 1996 when a downed PG&E power line caused a large fire that devastated a number of estates on Moon Mountain. Kamen rebounded quickly. He replanted damaged blocks and then started his own label in 1999. 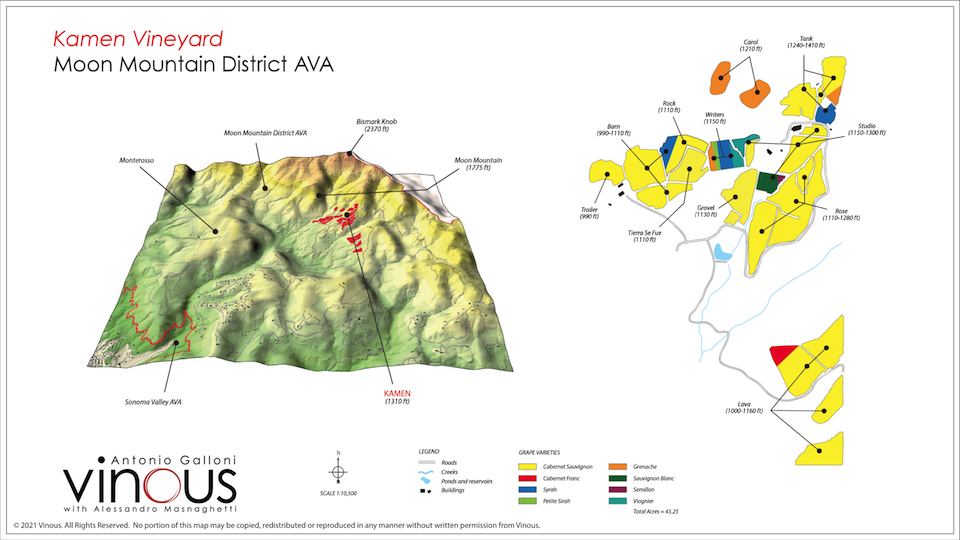 Kamen Vineyard in 3D and broken down by block.

"In 2001 a young winemaker from Napa came to see me,” Kamen told me recently. “He was convinced he could make wines on this side of the mountain that were just as great as those from the other side, in Napa Valley. That was Mark Herold. Mark blended the 2002 and made the 2003. He’s been our winemaker ever since.”

“At the time, Sonoma Valley always trailed Napa Valley,” Herold explained. "I looked at the Mayacamas Mountains and to me it was one mountain. I was curious to see what we could do on the Sonoma side. The first wines were made off of the core of the estate. We planted the Lava Blocks in 2009 and 2010,” he added.

Today, Kamen has 43 acres under vine, including 14 from the original 1982 planting, most of it Cabernet Sauvignon divided among seven clones, including the Kamen Heritage clone (believed to be Martini from Monte Rosso), See, 15 (also known as the Caldwell clone), 191and 169. Bits of Syrah, Cabernet Franc, Petit Verdot, Grenache, Sauvignon Blanc and Viognier round out the holdings.

The terrain is composed of mostly rhyolitic, volcanic soils with diatomaceous earth in a few places. The most extreme, rocky soils are found in the Lava Blocks, which are at the southern end of the property. Elevation ranges from approximately 1,100 to 1,450 feet.

About The California Vineyard Series

Since 2015 we have been working on a large-scale project to map the vineyards of California. To date, we have published seven regional Napa Valley maps and have several more in the works, including a five-map set of Sonoma Valley and a map of the Santa Lucia Highlands, both of which are nearly finished. Although travel restrictions related to COVID-19 have delayed final, on-the-ground checks that are such an essential part of the quality control process, we are eager to share our work and show you a little bit of what we have been up to through this series of excerpts. We will have much more on Vinous Maps in 2021.