Bonbons. Enormous bonbons. Gigantic wrapped sweets in the vivid colors of national flags: Brazil, Germany, Switzerland, Japan and of course, France. Each one is mounted on a pedestal and flank the driveway all the way to Rollan-de-By. Has Willie Wonka been here recently? Has he invented confectionary for sweet-toothed giants? This “eye candy” is making me a bit peckish, but you can’t eat chocolate before noon and in any case, I have to meet Jean Guyon for a complete vertical of his micro-cuvée, Haut-Condissas. 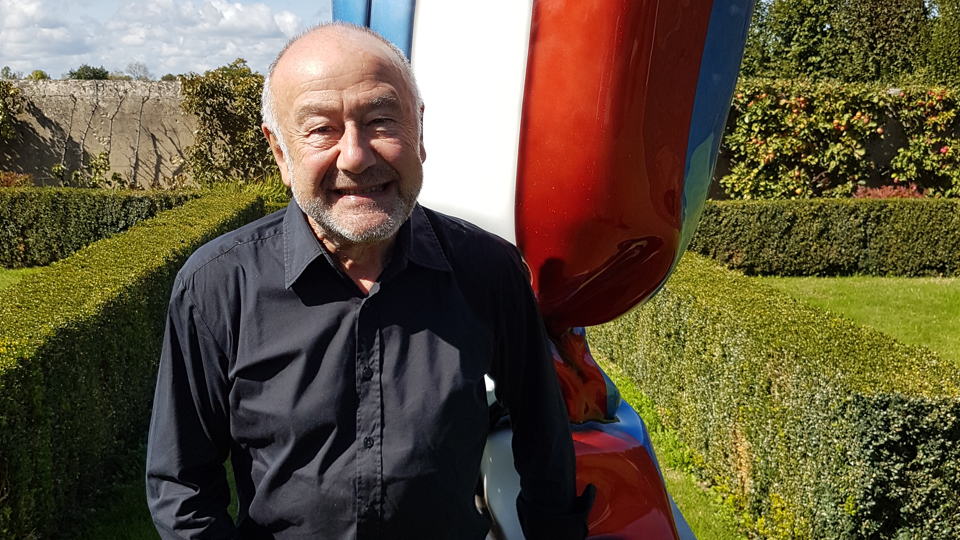 Jean Guyon posing in front of one of his “sweets”

I rarely travel to the far northern reaches of the Médoc. Beyond Calon-Ségur, the Médoc is a mystery...like Narnia...or north Essex. However, Haut-Condissas and its proprietor, Jean Guyon, intrigue me. He is waiting outside, an indefatigable gentleman who exudes energy palpable even before I have even opened the car door. He must be in his fifties or thereabouts, quite athletic for his age, confident and chatty, one of those people you can instantly tell has enjoyed a successful career. “I was an interior decorator,” he informs, revealing his modest beginnings as we enter his house, generously decorated with more modern art. “I attended a design school in Paris and studied carpentry. But my parents always liked wine and food. When I was 20 years old I had no money, but along with three friends we bought lots of bottles...big wines...First Growths when they were cheaper. We tasted them with sandwiches. But I wanted to know if I could make the wines myself. I wanted it to be my wine.”

It is clear that young Jean Guyon was as ambitious as the elder Jean Guyon. Unsurprisingly, that ambition is conferred upon his wines and, in particular, Haut-Condissas. “I bought two hectares in 1990 that formed the basis of Rollan-de-By from an old man who had a five hectare estate. There was just a small cabanne [stone hut]. I bought this property in 1995 when there was nothing here, but I found the same terroir as Saint-Estèphe and so I thought I could make a Grand Vin. Now it is 15 hectares planted at 10,000 vines per hectare.” 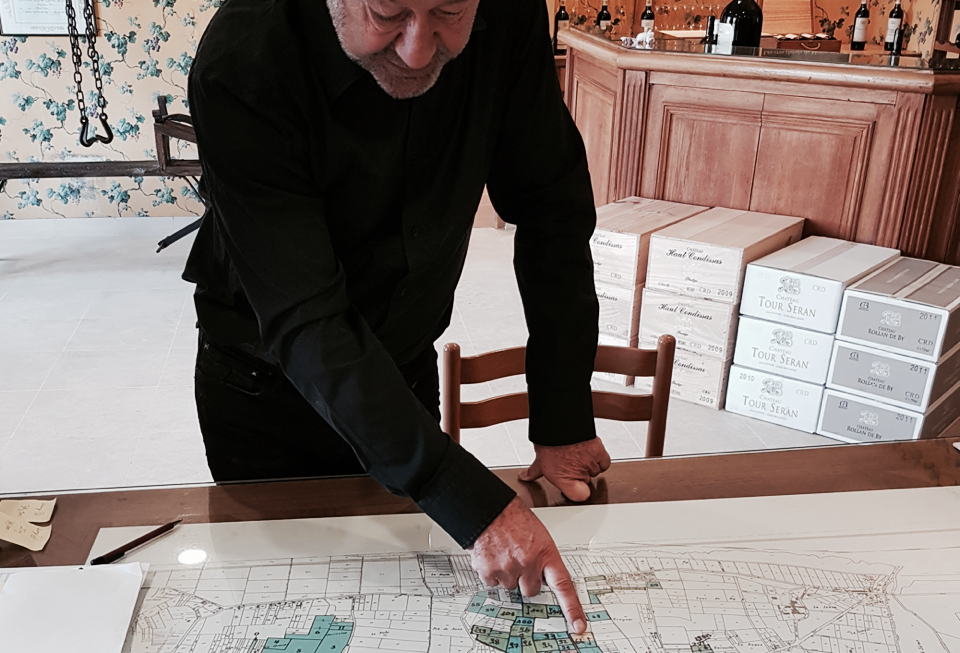 Haut-Condissas comes from a choice cut of stony terroir within Rollan-de-By. “It comes from a selection of the best parcels that total approximately 5 hectares,” he explains. “The vines lie on Quaternary gravel with some blue clay.“ He shows me a map of the local area that highlights an impressive diaspora of holdings scattered in the northern Médoc. I ask Guyon about the relatively high proportion of Petit Verdot, since that forms one of the highest percent of plantings on the Left Bank. “A majority is Merlot, 60%, a little Cabernet Franc and Cabernet Sauvignon, 10% each, and 20% Petit Verdot that I like a lot because it is rich and aromatic. If you cut four or five bunches then you can achieve the ripeness. You need a lot of sun. It takes a lot of work in the vineyard. We treat each of the 12 parcels like gardens.”

Later Guyon insists that we inspect one of his parcels. Nothing unusual there, except he is not driving a mud-splattered rust bucket 4x4, but a silver Bentley. I’ve never actually been in a Bentley before. He flicks a switch that changes the suspension. “This will make it better,” he assures as we speed into the vines and I am soon being tossed up and down like a salad. Conclusion: Rolls Royce did not have rutted vineyards in mind when they designed their luxury vehicle. 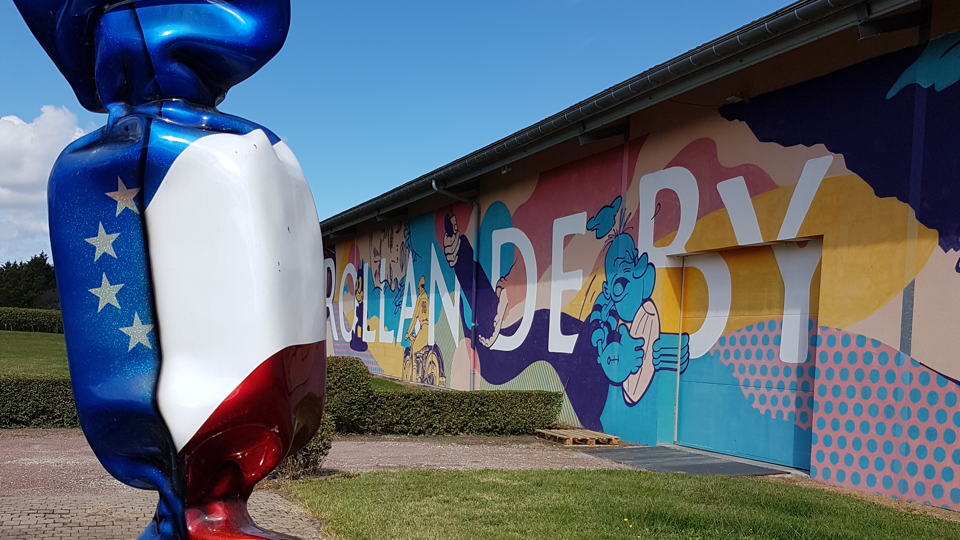 We then take a quick look at the winery. The artwork continues here, a few more wrapped sweets and one facade painted with a huge gaudy, slightly surreal mural of Popeye and Mickey Mouse that must surely be visible from space. Harvesters are gearing up for the imminent harvest, parallel vibrating sorting tables being cleaned and primed. The vinification is fairly straightforward. Alain Raynaud and Riccardo Cotarella have been the “big names” that have consulted here over the years, as well as Olivier Dauga who was the first technical director and continues to consult for the blends. One characteristic of Haut-Condissas is the use of 100% new oak during a 24 months élevage for every vintage, something you might expect on a Grand Cru Classé. Also, in the late 1990s Guyon used some bâtonnage and sourced barrels from Burgundy with a gentler toast than that favored by most Bordeaux coopers. 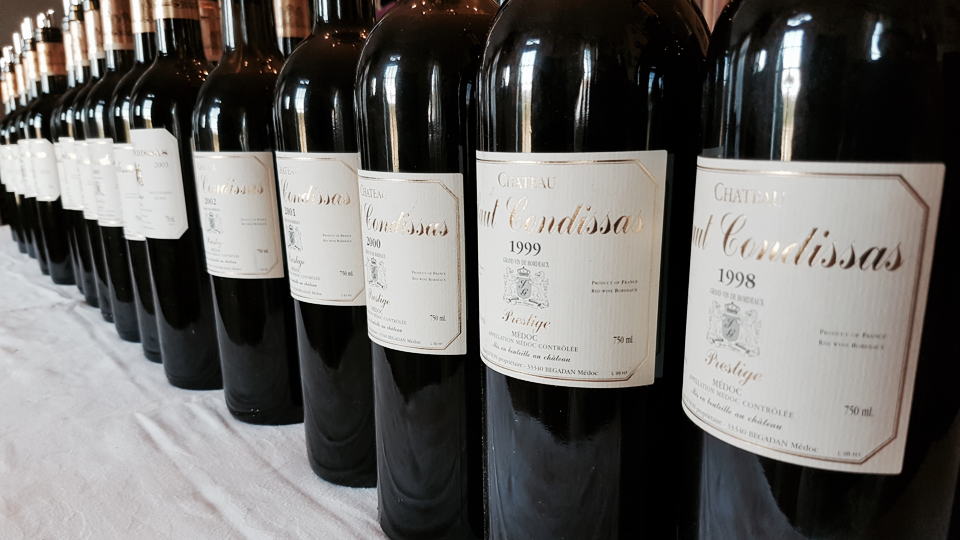 Lined up a ready to go: a complete vertical of Haut-Condissas

Together we undertook a complete vertical of Haut Condissas from the maiden 1997 vintage to the most recently bottled. Certainly, there are elements of a bold, riper styled, modern Médoc, as just a cursory glance at the vinification tells you. The earlier vintages have aged well enough, albeit with a tendency to survive rather than blossom into something extraordinary. The imprimatur of the winemaking is the guiding hand rather than magic translated from terroir – quite bold and dense in style, wines that want to make a statement. Given that wines from the late nineties have lasted two decades, there is proof of longevity from the beginning, again, not unlike the first vintages of Valandraud. There is a change after the 2005 vintage. A subtle re-organization of the parcels that comprise Haut-Condissas reveals a more nuanced and sophisticated wine. In my opinion Haut-Condissas does not require 100% new oak in every vintage. That approach feels a little anachronistic these days: a statement of intent, a badge to pin upon your jacket breast for others to see, rather than raising the wine in the optimal proportion of new wood. In vintages such as 2004 it overwhelms the wine, dictates the message and it is a style that Bordeaux is now less hidebound towards. But certainly, I find the 2010 Haut-Condissas deeply impressive and worthy of a decade’s cellaring before broaching.

You could argue that Haut-Condissas deserves a higher profile, equal to that of the aforementioned Valandraud. The quality is certainly there in the glass. Often consumers become circumspect towards premeditated wines with high ambitions and prefer a more natural elevation, one driven by their demand rather than the desire of its owner. Many such wines follow a recipe, an equation something along the lines of lots of money+terroir+famous consultant+Draconian selection+100% new oak=big score+high price. That is found all around the world, not just in Bordeaux. I would point to some differences at Haut-Condissas, not least the unusual composition of grape varieties for the Médoc, a majority of Merlot plus a healthy dollop of Petit Verdot. Additionally, given the care that goes into Haut-Condissas, it is released at a refreshingly affordable price. Kudos to Jean Guyon for offering a “haut-couture” wine without a prohibitive price tag. Whilst I am sure Guyon would love to see Haut-Condissas uttered in the same breath as a First Growth, in one way that is a moot point if the wine achieves a certain level of quality. In that sense, it might be more appropriate to compare Haut-Condissas with its peers here in the northern Médoc where it is probably the best wine. Tweak that oak a little and I feel it could be even better.

(My thanks to Jean Guyon for organizing this tasting and the bumpy vineyard excursion.)

A Century of Bordeaux: The Eights, Neal Martin, May 2018