One of the most fascinating aspects of Champagne is its ability to transform over time. This remarkable tasting provided a truly once in a lifetime opportunity to compare the three principal releases of Dom Pérignon across a number of iconic vintages of the 1960s and 1970s.

I have had many unforgettable tastings during my annual visits to Dom Pérignon, but I don’t think I have ever had an opportunity to taste so many of the house’s Champagnes in a single sitting. This retrospective was organized and hosted by a collector from the Midwest for the simple pleasure of sharing the wines with a group of close friends. We tasted the Champagnes over dinner at Michael White’s Marea. Wine Director Francesco Grosso did a fabulous job looking after the wines. Every aspect of service was spot on.

Dom Pérignon is Moët & Chandon’s tête de cuvée, although today, it is marketed as a separate brand. One of Champagne’s first luxury cuvées, Dom Pérignon was introduced in 1936 with the 1921 vintage. Today, Dom Pérignon is released at three separate moments in time that correspond to what Chef de Caves Richard Geoffroy calls ‘plenitudes,’ that roughly equate to the three distinct phases of a wine’s evolution. (In decades past, Dom Pérignon was released in many smaller batches.) The original release is aged on crown seal while wines in the P2 and P3 (formerly Oenothèque) program are aged on cork. Extended time on the cork tends to bring out the signature reductive character that is Dom Pérignon the single most distinctive attribute. 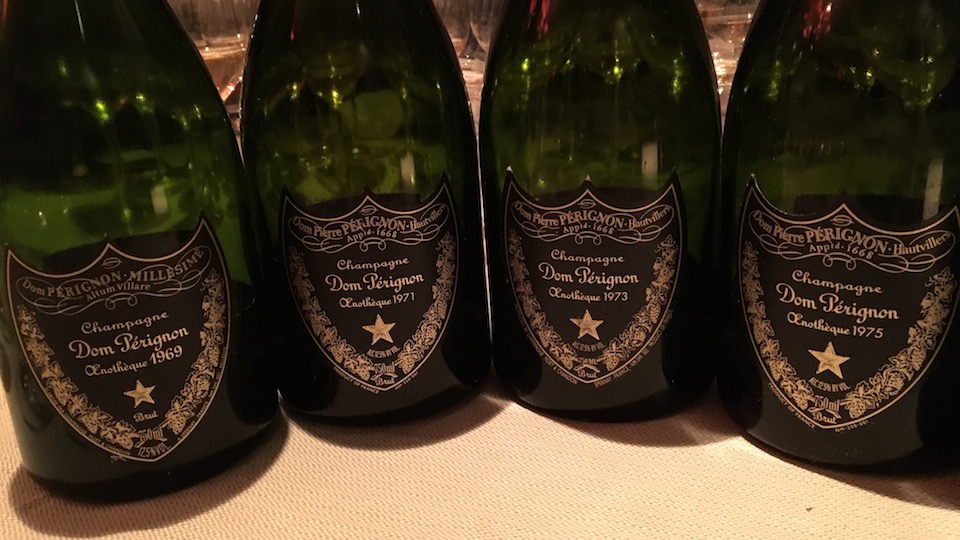 A few years ago, Dom Pérignon changed the name of their late-release program from Oenothèque to P2 and P3. On a positive note, the distinctions between the P2 and P3 release are clearer than in the past. Unfortunately, Dom Pérignon also decided to remove the year of disgorgement from the back labels for these wines, which makes it impossible for consumers to differentiate from the different disgorgement years for P2 and P3 wines. At a time when Champagne has largely embraced a much more open, consumer-friendly approach, Dom Pérignon has intentionally gone in the opposite direction. Given the eye-popping sums these bottles fetch, I do not think a little information is too much to ask for. As a consumer, I personally do not find much allure in the black box approach.

Multiple threads were woven throughout this tasting. Of course, it was fascinating to compare the three main releases across a number of iconic vintages. In the past, I have often preferred the original release, but in this tasting, the most consistent wines where those from the Oenothèque or P2 series. The 1960s and 1970s were also a period of tremendous change in Champagne. Yields were generally lower during this time than they became during the 1980s, when newer clones planted with the express goal of increasing yields came online. At Dom Pérignon fermentations gradually moved from oak to stainless steel from 1959 to 1966. Similarly, crown seal replaced cork for the main release from 1973 to 1976. 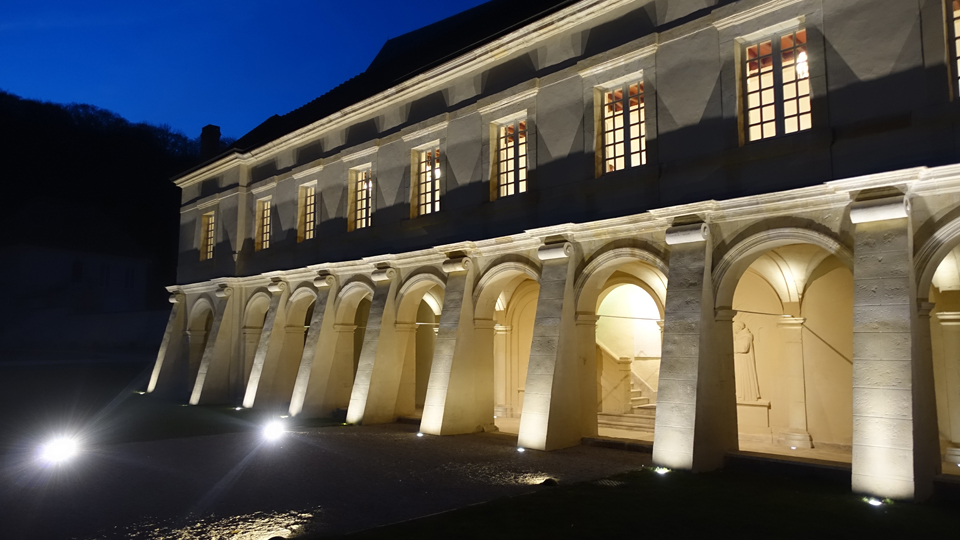 The Abbey at Hauvillers, where Benedictine monk Dom Pérignon is widely credited with a number of innovations in the early history of Champagne during the 17th century

Despite frost and hail, Mother Nature gave producers a healthy crop in 1966, a year that remains a benchmark in Champagne.

The 1966 Dom Pérignon (Original Release) is absolutely gorgeous. Soft, open-knit and sensual, the 1966 is utterly sublime, with plenty of the orange peel, coffee, hazelnut, chamomile and dried flower nuances that are typical of mature Dom Pérignon, especially during this era. Gently mellowed by the passage of time, the 1996 is now at peak. Sadly, the 1966 Dom Pérignon Oenothèque is corked. There is, in my opinion, no reason why an Oenothèque series Dom Pérignon should be flawed in any way.  At disgorgement, all of the bottles are supposedly tasted one by one. Any wines that were corked at their original bottling should be theoretically discarded at this point. The small production of the Oenothèques should make it possible to control each and every cork before the wines are re-corked and finished for shipping. Given the cost of these Champagnes, especially in recent years, corked Oenothèques are simply unacceptable. 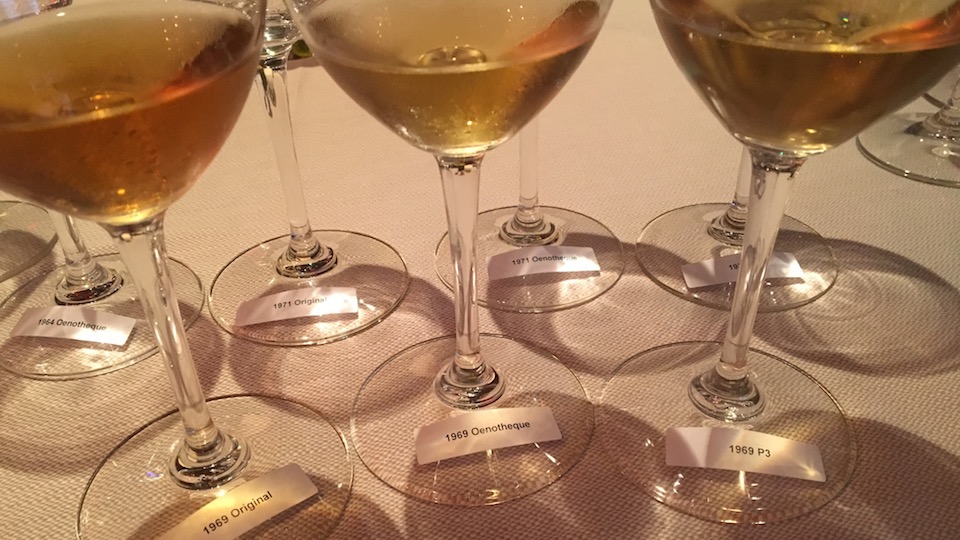 Nineteen-sixty nine is one of my favorite vintages in Champagne. In addition to these wines, Dom Pérignon made a Rosé that is phenomenal. The 1969 Dom Pérignon (Original Release) is fabulous. Aromatically, this bottle is perhaps a touch advanced, but the wine’s inner sweetness and textural depth more than make up for that. In the glass, the 1969 is ample, creamy and incredibly inviting. Hints of orange peel, crème brulée, hazelnut and honey blossom in this super-expressive Champagne. The bubbles have mostly receded, and yet all the elements are impeccably balanced. One of the highlights in this range, the 1969 Dom Pérignon Oenothèque (disgorged 2006) is magnificent A stunning, vibrant Champagne, the 69 Oeno hits all the right notes. Lemon peel, white flowers, crushed rocks, slate and smoke all soar out of the glass. A thin veil of reduction adds character without being overpowering or dominant. Vivid in color and totally crystalline, the 1969 dazzles at every turn. What a gorgeous wine it is. A deeper, richer expression of the vintage vis-à-vis the Oeno comes through in the 1969 Dom Pérignon P3. There is a good bit of aromatic brightness and plenty of freshness as well, but the P3 is distinguished by its textural breath, volume and pure power. The richness of the fruit makes the bubbles barely perceptible in this exquisite Champagne. I prefer the greater precision of the Oeno, but both of the late releases are sublime.

Champagne saw a number of superb vintages during the 1970s. Frost and hail were both issues in a year that gave producers plenty of challenges. The 1971s in this tasting were impressive, especially next to the more celebrated vintages of the decade. Although the 1971s faded a bit with time in the glass, all three wines were terrific.

The 1971 Dom Pérignon (Original Release) is a powerful, structured Champagne. Rosewater, dried flower and spice nuances give the 1971 a distinctive exotic profile.  The 1971 does not have the fruit depth or mid-palate richness of most of the other wines in this tasting. As a result, the 1971 starts to feel a bit dry and austere as the fruit begins to fade. Even so, the 1971 is a highly attractive Champagne. One of the most pleasant surprises of the evening the 1971 Dom Pérignon Oenothèque (disgorged 2006) is superb. Powerful and vibrant on the palate, with tremendous freshness, the 1971 Oeno exudes class. Lemon oil, almond and wild flowers give the wine its bright flavor profile, but it is the wine’s tension, energy and balance that are most remarkable on this evening. Like the 1969 P3 in this tasting, the 1971 Dom Pérignon P3 is dense, powerful and quite vinous in style. A huge, explosive Champagne with fruit that nearly covers the mousse, the 1971 has enough depth to drink well for another decade, maybe more. I have a slight preference for the Oenothèque (P2) in this flight. 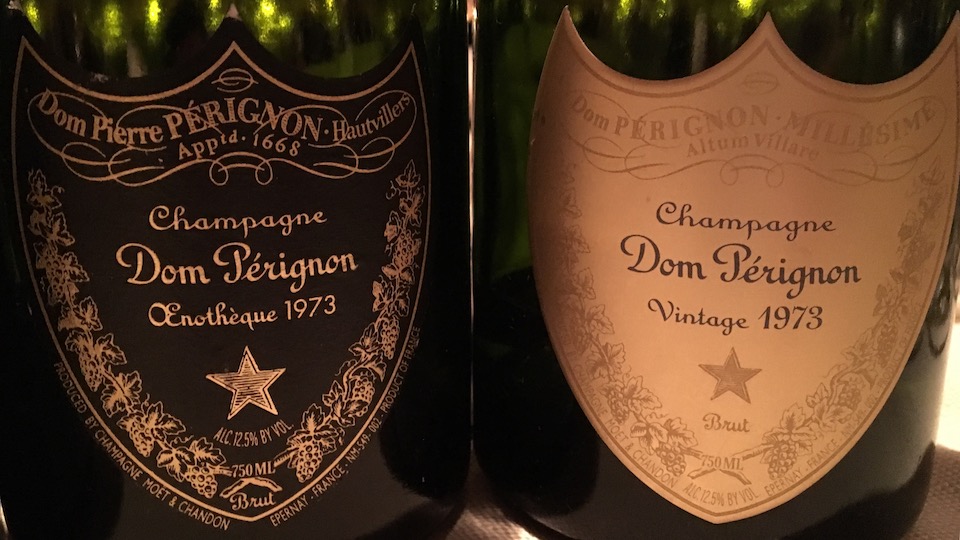 The warm, dry summer of 1973 produced a crop of Champagnes with healthy sugars and low acidities. Despite heat, hail and sunburn, yields were quite healthy for the era. The wines have a certain weight and gravitas that recalls the 1976s, albeit with less overall intensity.

The 1973 Dom Pérignon (Original Release) is a pretty wine, but it is also quite forward. Caramel, burnt sugar and dried flowers add to the mature flavor profile. Even so, the 1973 has enough breadth to hang on for at least a few more years. I have had better bottles. One of the highlights of the evening, the 1973 Dom Pérignon Oenothèque (Disgorged 2010) is vivid and finely sculpted. There is plenty of nuance, depth and freshness in the glass, but it is the wine’s staying power and overall persistence that stand out most, especially as the evening wears on. In this flight, the 1973 Oeno is a Champagne of total finesse. It is another stellar Oenothèque and the best wine in the flight of 1973s. Dom Pérignon’s 1973 P3 offers good up-front appeal, but some of that initial richness tapers off on the mid-palate and into the finish, which makes the wine feel a bit disjointed. Like all of the P3s in this tasting, the 1973 exhibits considerable freshness and energy, if less of the overall finesse of the surrounding vintages. 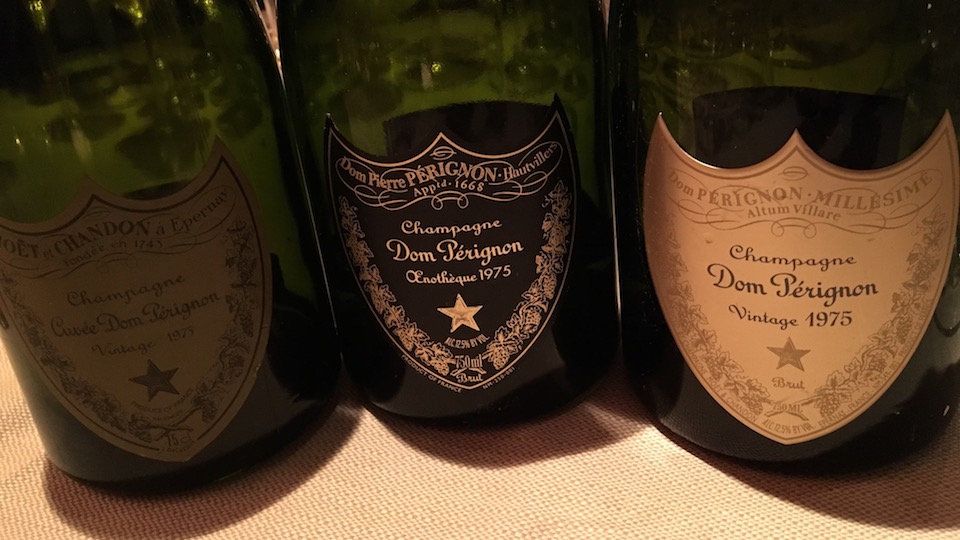 This flight of 1975s is absolutely stellar and also my favorite grouping of the evening, along with the 1969s. One of the great vintages of the 1970s, 1975 is generally regarded as not quite reaching the highs of 1973 or 1976, but Dom Pérignon turned out a set of superb Champagnes.

The 1975 Dom Pérignon (Original Release) is fabulous. Rich, explosive and incredibly inviting, the 1975 possesses magnificent depth and pedigree to burn. The very first hints of aromatic nuance are starting to develop in a wine that comes across as remarkably youthful. Over the course of several hours, the 1975 loses some of its intensity, but it remains superb. This is a tremendous showing. Another stunning Champagne, the 1975 Dom Pérignon Oenothèque (Disgorged 2007) remains one of the greatest wines I have ever tasted from Dom Pérignon. This bottle is truly spectacular from the very first taste. With its expansive, soaring aromatics and bright, finely sculpted fruit, the 1975 simply has it all. Even after several hours of air, the 1975 remains breathtakingly vivid. The 1975 Oenothèque embodies the classic style of late-release Dom Pérignon in its penetrating reductive notes. Following the Oenothèque, the 1975 Dom Pérignon P3 has a pretty tall order. Painfully – almost shockingly austere – the P3 bristles with energy and tension. Readers lucky enough to own it will want to wait at least five years. Even after several hours of air, the 1975 P3 remains wound up and tense, but with a sense of energy that is likely to literally explode with a bit more time in bottle. 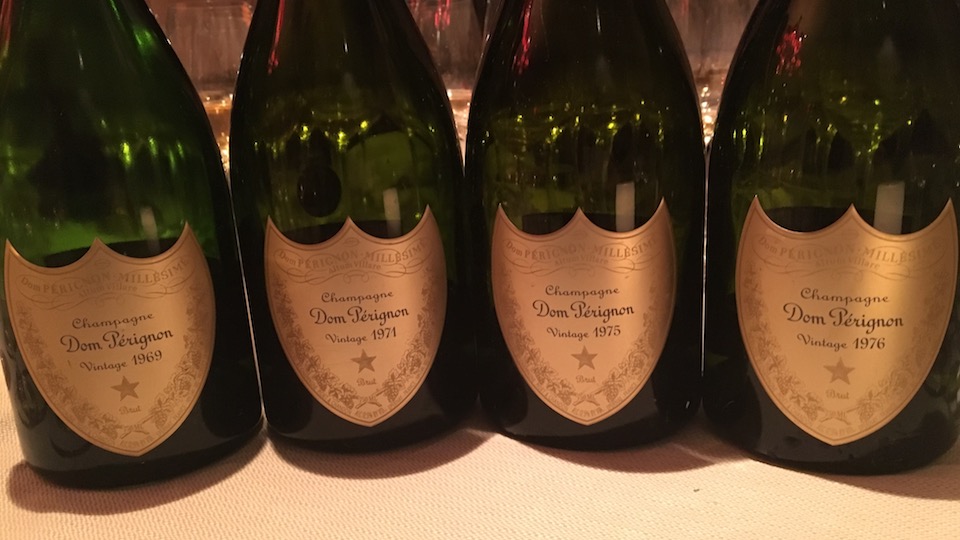 Three 1976s round out this unforgettable evening of wine, food and friendship. All three wines are marked by the natural intensity that is the signature of this famously hot, dry year.

The 1976 Dom Pérignon (Original Release) possesses a very distinctive set of baritone inflections that give the wine its powerful, deep personality. Ripe and full-bodied on the palate, yet very much in the Dom Pérignon style, the 1976 is a wine of textural intensity and raciness. On this night, it is superb. All of the qualities found in the original release are amped up in the 1976 Dom Pérignon Oenothèque (Disgorged 2003). Unctuous and deep the 1976 Oeno is a real powerhouse, but all of that intensity is nicely countered by the wine’s brightness and energy. This is another stellar release in the Oenothèque (P2) series. The 1976 Dom Pérignon P3 is a revelation. Among other things, it is noticeably brighter and more nuanced than the other 1976s in this flight, with a real sense of crystalline precision that is unusual for such a big wine. It is also remarkably polished in every way, not to mention one of my favorite wines of the night.

See All the Wines in the Order Tasted