There are few more iconic Australian wine images than the ochre red soils of Coonawarra. Over thousands of years, rich iron deposits have been weathered away leaving only rust in their wake. These tongues of red soil fan out from Australia’s interior, but there are hardly any places where they reach the cooler, southern coastline. As the harvest approaches, those dark, friable soils starkly contrast against the green leaves and handfuls of intense ruby Cabernet Sauvignon fruit. This is Terra Rossa country. 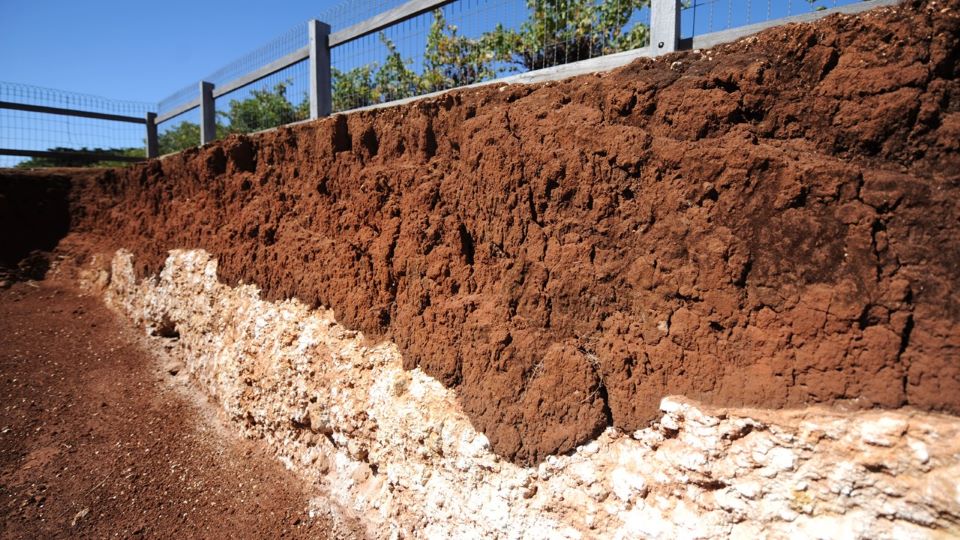 Who Was John Riddoch?

At the end of the 19th century, it was a hardy Scotsman, John Riddoch, who first believed in this far-flung corner of South Australia, not only for wine but as an agricultural center for the country. Riddoch had the Midas touch and a rare eye, seemingly everything he touched turned to gold. Riddoch started out as a gold miner but rose to be a politician and one of South Australia’s largest landholders, with over 100,000 acres of land, much of which was devoted to sheep and wool. The cool and sometimes bitter local climate probably suited him well, a reminder of his roots.

During his early years on the goldfields, Riddoch had also been a wine merchant and the interest never left him. With grand plans to make the southeast a food bowl, he had his property surveyed and was the first to discover the valuable Coonawarra Terra Rossa soils. He was one of the earliest to bring science and knowledge into the establishment of Australian vineyards.

But it is not only the thin line of fertile, iron-laced soils rich in calcium and silica that makes Coonawarra what it is, but also what lies beneath - a layer of limestone from an ancient seabed that averages 50cm deep, but in some places sits close to the surface. Soils are free draining near the top, so the vines do not have ‘wet feet’. Unusually for a prime wine region, Coonawarra is also almost flat as a pancake, slowly rising toward its eastern border with most of the main vineyards only 60m above sea level, making the free draining soil profile absolutely essential to maintain quality. There is a water resource deep down that is accessible by older vines which helps the local wines keep their sleek shape, even in hot years.

Riddoch planted acres of fruit trees and vines including Shiraz, Cabernet Sauvignon, Malbec and Pinot Noir, as well as selling parts of his property to encourage other dreamers to do the same, the Blockers. The first vintage was bottled in 1895, and later years of ‘Coonawarra Claret’ were well received. Riddoch built a winery that was completed in 1897 which is still in use today. Unfortunately, at this time, Riddoch was close to the end of his life; his untimely demise in 1901 saw the region’s wine fortunes dramatically fall as brandy became the only home for local fruit. Riddoch was a man of big ideas and great success, but the timing of his death saw Coonawarra’s first flame extinguished before it had really gained any momentum; its remote location made other regions such as the Barossa and McLaren Vale more favourable for the embryonic industry.

By the end of the 1930s, only 600 acres of grapevines remained in Coonawarra, and the region’s future and John Riddoch’s legacy were far from assured. The state government was paying growers to pull out their vineyards and replace them with dairy farms – thankfully a handful did not take up the offer. However, the 1950s proved to be a golden era for the country and the wine industry thanks to a newfound national confidence. The influx of European immigrants and culture after the Second World War further grew the taste for wine and saw a move away from fortified wines, which had long been the industry’s bread and butter. Many iconic wines and brands launched during this period, including Penfolds Grange, Henschke Mount Edelstone and Hill of Grace, as well as Wynns Coonawarra Estate. 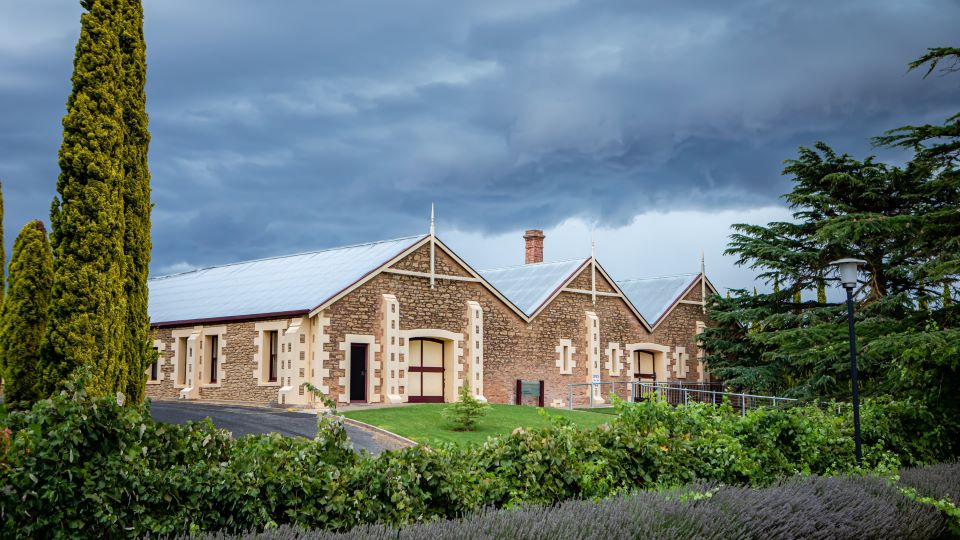 The Wynns name came about in 1951 when Melbourne wine bar owner Samuel Wynn and his son David purchased the old estate property. Wynn was not in fact his real name; Samuel Wynn changed his name from Shlomo Weingraub after landing in Australia from Poland, a common habit at that time. The Wynn family had been buying the estate wines for some years before they purchased it, recognising the potential. Wynns’ first bottling was from a year that was not easy: a 1952 Wynns Claret made with Shiraz. The first Cabernet Sauvignon was made in 1954. This wine began what is an incredible lineage of impressive Estate Cabernet Sauvignon. Some years ago, I attended a full vertical tasting that stretched back to 1954. This vertical showcased a wine that was ahead of its time and remains one of Australia’s great wine bargains, with wines from every decade still drinking remarkably well.

Even more remarkable is the fact that early vintages were made under challenging conditions. There was no electricity, with the winery relying on steam power. Ferments were only four days long due to a chronic lack of tank space. Early morning picking was used to retain fruit integrity with delivery by horse and cart. Coonawarra’s isolation, which played a part in its first downfall, again had a role in the small number of labourers available to work in the vineyard. Supporters of the local football team were drafted into pruning. This was frontier winemaking which slowly evolved and developed over time. Despite these challenges, Coonawarra built a reputation for long-lived claret styles. Unsurprisingly, the success of Wynns brought many others into Coonawarra looking for cooler climate offerings, including Lindemans and Penfolds, who have crafted iconic wines here.

Vineyard quality has always been a vital part of the Wynns story. While starting with a healthy supply from the original property, this was increased in the 1980s. Today, Wynns is the largest landholder in Coonawarra, including ownership of over 50% of the vineyards located on Terra Rossa soils, which provide a wonderful resource for blending. It includes the oldest Coonawarra Cabernet Sauvignon, the Johnson’s Block next to the winery, planted in 1954. The continuing greater refinement in viticulture has notably changed over the years and evolves to this day.

Wynns has a long lineage of high-quality winemakers, but arguably the last 30 years, during the custodianship of Sue Hodder and Sarah Pidgeon, have been its most impressive in the vineyards and winery. The long-term tenure of these talented winemakers, combined with a viticultural team that includes Allen Jenkins, cannot be underestimated.

After the challenges of the 2000 vintage when it became clear that the condition of the vineyards was holding the brand back, Wynns began a massive, and almost unprecedented, program of vineyard regeneration, with 30% of vineyards replanted. According to Hodder “many were irrelevant varieties or had vine trunk ailments or similar. The recent replanting has been done with such care and precision – rootstock and scion selection, soil preparation and row orientation all with climate change in mind.” As such, there was no vintage of Wynns John Riddoch between 2000 and 2002. While some vineyards were pulled out and replanted, others had their architecture and trellising radically changed.

Over the last 30 years, every part of the winemaking and viticulture processes have been prodded and poked. Sarah Pidgeon has led detailed oak trials which have made tangible changes to quality and evenness of the vintages. One of the most important pieces of work has been around yield and quality. The Wynns team have identified the key yield parameters to maximise quality. They use modern sampling techniques to test grapevine fruitfulness early in the season to direct vineyard operations. The key beneficiary of this has been the John Riddoch Cabernet Sauvignon.

The famed Terra Rossa soils of Coonawarra exist in a north to south cigar shape that is 17 miles long and less than two miles wide, almost all of which are planted with grapevines. The Wynns vineyards are generally located down the centre of the cigar, which are the highest vineyards, although the altitude differences are quite small, with soils becoming sandier further to the east. The unique, highly concentrated arrangement of vineyards in the region, much of which is owned by Wynns, has seen a Burgundian-like attention to mapping of soils and bedrock. This is without a doubt highly influential in their vineyard management and in turn wine quality. 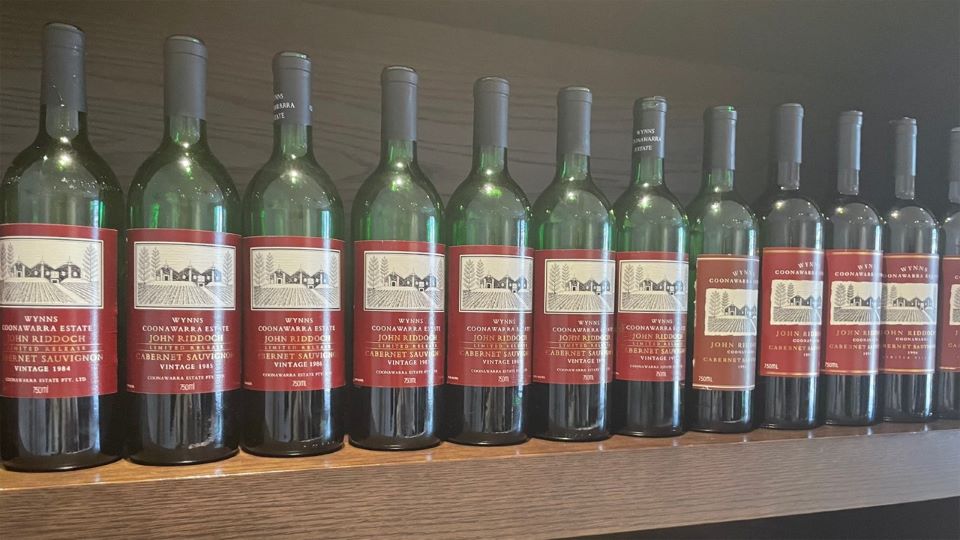 With growing confidence in the quality of the wines from Coonawarra, Wynns took the obvious step to create a reserve label, The Cabernet Sauvignon John Riddoch. The first vintage was in 1982, and the wine has been made in most years since then. According to Sue Hodder “John Riddoch is not meant to be more concentrated than the Black label - it is simply meant to have more complexity and interest.” It is essentially a block selection, which changes every year depending on the vintage conditions, but there are several vineyards that are regulars, including V & A, Alex 84 & 88, O’Deas, Messenger and Childs. Over time, the parcels that have made it into John Riddoch have generally come off vines that are over 20 years old, with the average around 45 years. They are also on their own roots, not clonally selected, in the heart of Coonawarra along the main road and planted in shallow soils with a depth of 40cm to 120cm of red clay over limestone. Overall, the final selection of John Riddoch makes up only the top 1% of Wynns total production.

Winemaking for Wynns John Riddoch in recent years has been fairly straightforward. Grapes are primarily hand-picked and optically sorted before fermentation takes place in open, stainless-steel tanks divided by vineyard block. Fermentation reaches around 28 to 30 degrees Celcius with grapes pressed after 12 to 15 days and then run off into new and used French oak barrels for between 14 and 20 months. For the 2019 vintage, 31% was in new French oak with the remainder in oak between one and four years of age. Historically some vintages were matured in American oak for an extended period of time, but now maturation is in 100% French oak. While some of these older vintages were under criticism at the time, those oak choices now have less effect than expected, with the wood finding its balance over time.

The full vertical tasting of Wynns John Riddoch highlighted that this wine is one of the leading cellaring propositions for Australian Cabernet Sauvignon. Despite reaching back 40 years and almost into another world in terms of winemaking and viticulture, there were relatively few vintages past their best with increasing consistency over time. This impressive lineage is a tribute to the foresight of John Riddoch and the long toil of the Coonawarra community, which to this day still includes descendants of those original Blockers who believed in the Riddoch dream all those years ago.

The Not So Wild West: Margaret River in the Groove, Angus Hughson, September 2022