The Grand Vin of the North: The Past, Present and Future of San Leonardo

We have all heard of the Super Tuscan, the category that transformed the popularity of Italian wine, elevating it from pizza parlors and large glass jugs and placing it on the want lists of consumers and collectors around the globe. Super Tuscans changed Italian wine forever, introducing international varieties to Tuscan soils and proving that Italy could bring its own flair to the Bordeaux blend. This didn’t happen overnight, nor did it happen in a single decade, but today there’s little chance that any wine lover with a finger on the pulse of Italy hasn’t heard of the renowned Sassicaia.

However, what those same collectors often miss is that the Bordeaux blend has excelled and continues to excel in another part of Italy, thanks to a family that’s deeply rooted in their region, its history and the varietals that separate it from all others. It’s a wine that transports you to the place where it’s created, yet somehow also to another time, communicating the aromas, flavors and elegance that are often lost in the Bordeaux blends of the current day. That region is Trentino in the northeast of Italy, and the wine is San Leonardo. 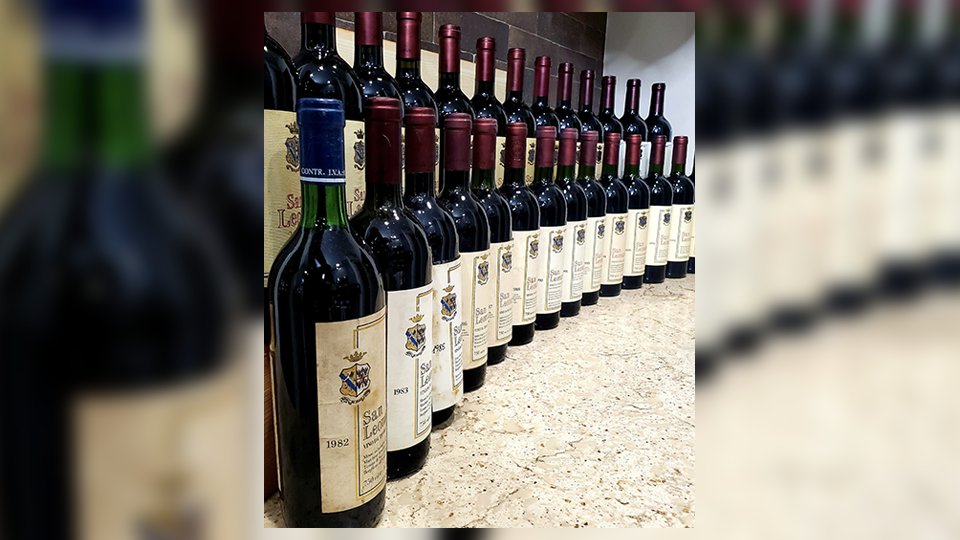 A Story Worth Telling

Tenuta San Leonardo boasts a wine-producing history that goes back over 1,000 years, beginning when the Frati Crociferi (a religious order) practiced winemaking, supplying the Austro-Hungarian court at Vienna. In the 1700s, the Gresti family purchased the estate, and then, over 100 years later, they joined with the Marchesi Guerrieri Gonzaga family through marriage, creating the modern-day Tenuta San Leonardo. For decades afterward, the family continued to produce Trentino-styled wines, with a focus on Cabernet Franc, Merlot and Riesling. However, it wasn’t until Carlo Guerrieri Gonzaga took the reins of the estate in the 1970s that the Bordeaux blend as we know it today came along.

Carlo Guerrieri Gonzaga was driven by a passion for wine, primarily that of Bordeaux, which he developed while studying oenology at the Station Federal Lausanne in Switzerland. However, when the time came to return to his family’s estate, Gonzaga discovered that his father had only recently hired a new winemaker. Unable to apply his skills at San Leonardo, Gonzaga found his way to Tuscany, where he began to work with his longtime friend Mario Incisa della Rocchetta of Tenuta San Guido. This was where the inspiration for San Leonardo truly hit, as he was working his way up through that cellar, learning from the great Giacomo Tachis himself, gaining an understanding of how Bordeaux varietals could excel on the Italian coast, and watching the success of Sassicaia slowly growing.

Then, in 1974, everything changed. With the death of his father, Carlo Guerrieri Gonzaga inherited the Tenuta San Leonardo estate and vineyards, yet he was also faced with succession taxes that ultimately forced him to sell a large portion of the family vineyards. However, the remaining property still gave him the raw materials to make his dream come true. Guerrieri Gonzaga began to look at the vineyards with a set of experienced eyes, planting new sites using Guyot training and cordon spur, while lowering yields throughout the family's double-pergola-trained vines. He knew that he had the perfect location: in the Adige River valley, between the slopes of Monte Baldo and the Lessini Mountains, which provided strong differentials between day and night temperatures throughout the season. Here, cold winds were blocked by the Alps to the north, while the warming currents of the Ora del Garda protected the vines from fungal diseases. 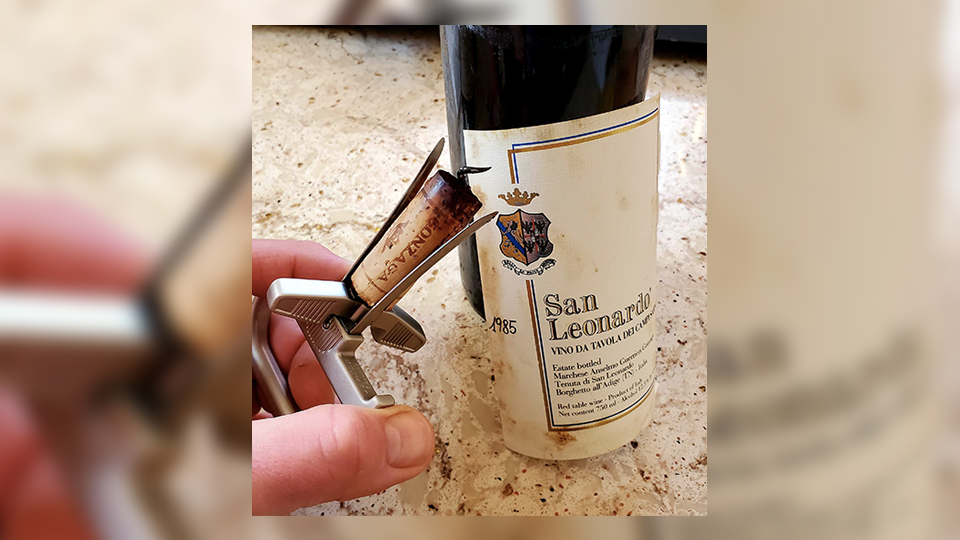 In 1978, Guerrieri Gonzaga planted his first Cabernet Sauvignon vineyard, the beginnings of what would one day form the backbone of San Leonardo. Merlot could also be found throughout the family's holdings, planted in pebble-rich clay soils, as well as old-vine Carmenère in the estate's sandy, higher-elevation parcels. However, at that time, Guerrieri Gonzaga believed this Carmenère was Cabernet Franc, as did all of his family members before him, which is why bottles of San Leonardo prior to 2010 will state that the blend is 60% Cabernet Sauvignon, 30% Cabernet Franc and 10% Merlot. As fate would have it, that same Carmenère ended up being the unintentional secret ingredient that would set San Leonardo apart from all others, even though it wouldn’t have even been permitted within the appellation guidelines of the time.

In 1982, Carlo Guerrieri Gonzaga released his first vintage of San Leonardo, a bottling that is full of life to this day. Then, in 1985, Giacomo Tachis began to consult as his oenologist, and together they created the house style – the same one that has gone on to define the northern Italian Bordeaux blend. According to Carlo Guerrieri Gonzaga’s son, Anselmo (the current head and CEO of San Leonardo), his father became aware as far back as the late 1980s that the vines believed to be Cabernet Franc were actually Carmenère, but he feared that Carmenère would be looked upon as an inferior grape by the public. It wasn’t until the 2010 vintage that Anselmo Guerrieri Gonzaga convinced him to change the varietal statement on the label.

Today, under the watchful eye of Anselmo Guerrieri Gonzaga, Tenuta San Leonardo maintains the traditions set forth by his father in the 1980s. Now with Carlo Ferrini as oenologist, the estate only works to improve upon perfection, without ever changing the Old World style of the wines. The family oversees 300 hectares, of which only 25 hectares are planted to vines and are now all farmed organically. In the cellar, there’s a gentle approach, with spontaneous fermentation taking place in cement tanks for 15-18 days, before individual parcels are moved to a combination of new and used French barriques for up to 24 months. Then comes another two years in bottle prior to release.

Another tremendous benefit to consumers and lovers of San Leonardo is the vast library of vintages back to 1982 that the family keeps secure in their cellar, and that are sometimes chosen to be released to the public or used for retrospective tastings such as this one. I frankly don’t remember the last time I found so much pleasure in tasting for hours on end. Each vintage, no matter if it was considered good or poor, had its own story to tell. Each wine gave pleasure, not only on the nose and palate, but also on a deeply intellectual level. Some vintages have passed their peak, yet all are still full of life.

If you enjoy classic Bordeaux, if you enjoy the energy and verve of Italian wine, and if you crave experiencing history in a bottle, then you should seek out Tenuta San Leonardo.

Lastly, through the 28 vintages I tasted of San Leonardo, despite global warming, the alcohol percentages of each wine started at 12% in 1982, and they have only risen to 13.5% in today's current releases.

All wines were tasted over the course of two days in June 2020 in New York City. 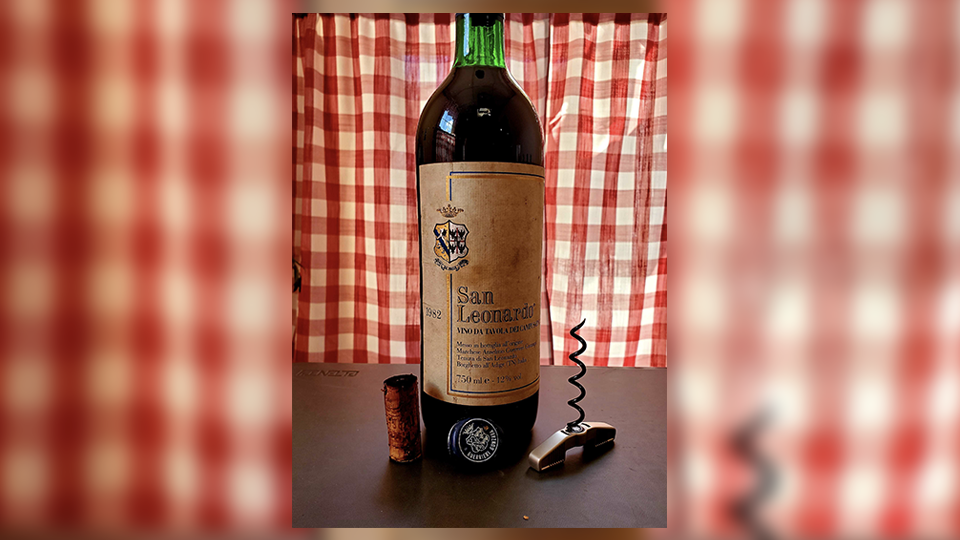 San Leonardo was not produced in the following vintages:

1998 - Carlo Guerrieri Gonzaga decided not to produce the 1998, yet later admitted to his son, Anselmo, that he was a bit disappointed and regretted that choice, stating, “Our wines on some vintages take time to show themselves.”

2002 - not produced due to heavy precipitation during harvest

2015 Brunello di Montalcino: The Vintage We Have Been Waiting For?, Eric Guido, April 2020
Tweet