White Burgundy, Riesling from Germany, Carrricante from Mount Etna, Verdicchio and Trebbiano Abruzzese are among the world’s great wines. The all have the capacity to mature and evolve over the course of many years, and so does Soave. Unfortunately, Soave is the victim of its past success and of the producers who monopolized on that success to fill their pockets, but I’m getting ahead of myself. 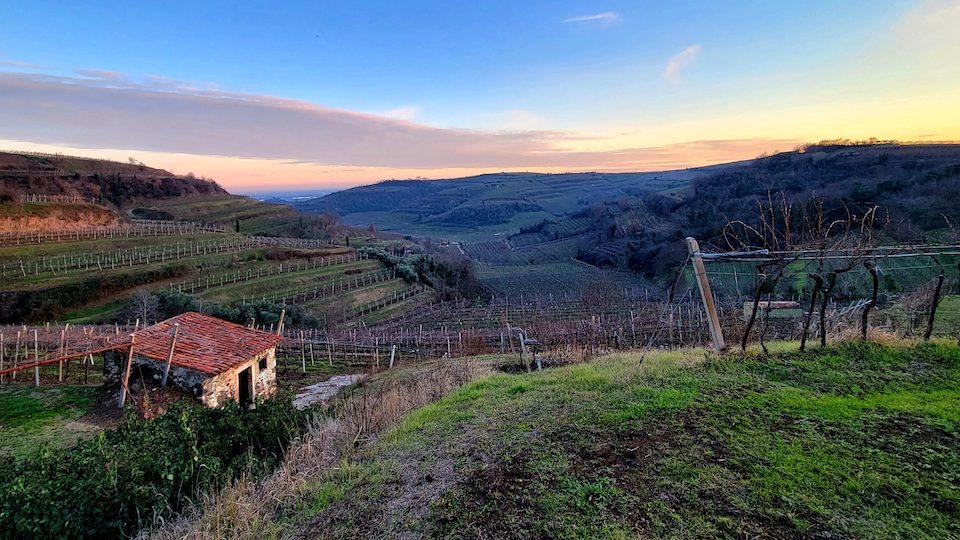 The Soave region is located in Northeast Italy, the Veneto, and more specifically, immediately east of the city of Verona. Soave itself is a picturesque town enclosed by a Medieval castle and walls that surround its historic streets and buildings. The city imbues a sense of being, a gateway as you gaze out toward the vineyards, as if its walls and battlements are protecting the hills and valleys from anyone that may wish them harm. These valleys at the base of the Lessini mountains were formed by massive volcanic activity and the shifting of tectonic plates that took place under an ancient sea that once covered the region. This is what laid the foundation for much of the soils throughout Soave Classico, including volcanic, basaltic rocks but also densely stratified limestone and clay, known as Scaglia Rossa. It’s also the reason for the drastic elevations and steep hilly terrain of the region that quickly rises from 150 to 600 meters, something that must be seen to be believed. In fact, when touring the hillsides of the Classico region, or of Soave Colli Scaligeri, one cannot help but question: how can this region be associated with one of Italy’s most mass-produced and often uninteresting white wines?

It's a complex answer that combines a misguided history with modern-day biases that still exist, but are worth understanding.

As I alluded to earlier, Soave enjoyed quite a bit of popularity through the second half of the last century. This created a number of issues, the first being the drastic increase of vineyards, especially in the plains, that now make up much of the Soave DOC. These vineyards are composed of alluvial soils rich in clay, sand and limestone, the result of glacial movements and streams that ran down from the Lessini mountains. For the most part, it is the vineyards on these flatlands that yield the sweetly scented and flavored Soaves that lack depth. Many of today's producers in the Classico region see this expansion as the catch-all of Soave’s difficult time in the market, but that’s where the complexity of the problem comes into play because also encompassed by the expansion of the Soave DOC are the limestone-rich hills separating Val di Mezzane, Val d’Illasi and Val Tramigna to the east, as well as volcanic hills of Val d'Alpone to the west. These hills, which fall into the classification of Colli Scaligeri, account for 2400 hectares of the entire region's 6900 hectares planted to vine and are capable of producing excellent Soave. In other words, you can’t judge a book by its cover.

The second issue lies in the grape varieties. There are two principal grapes that make up today’s Soave: Garganega and Trebbiano di Soave. Going back over hundreds of years, these were the grapes found in these hillsides. However, over time, the low-yielding, yet more interesting, Trebbiano di Soave was replaced with the likes of Trebbiano Toscano, Pinot Bianco and Chardonnay. It also bears mentioning that Garganega is a much more vigorous variety. As wineries chose to emphasize quantity over quality, the blending of high-yielding grapes along with a move towards lower-quality vineyards resulted in wines that earned Soave its mixed reputation. 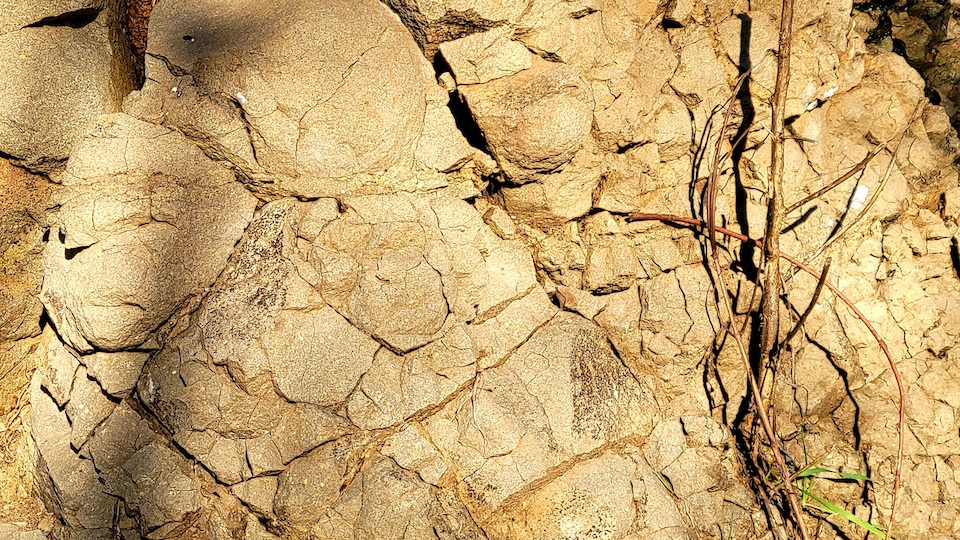 So Where Does This Leave Us?

First and foremost, Soave has been making leaps and bounds towards a very bright future. The first big step was the re-emergence of Trebbiano di Soave, which today is once again seen as one of the most important factors behind making great wines here. Trebbiano di Soave, also known as Verdicchio in other parts of Italy, adds savoriness, spice and elevated acidity to the wines, which nicely balances Garganega’s sweet florals, fruits and almond notes, as well as its more opulent palate presence. Today’s blend for Soave permits 70% Garganega and up to 30% Trebbiano di Soave or Chardonnay, with Soave Superiore permitting only 5% Chardonnay. However, it’s not uncommon to now see 100% varietal Garganega or a blending of Garganega and Trebbiano di Soave without any addition of Chardonnay. Another white wine you’ll see from these hills, yet can’t yet be called Soave, is 100% varietal Trebbiano di Soave, such as Suavia’s Massifitti. So, as you can see, it’s safe to say that the region is fully aware of the recipe for success.

Another significant development is the outlining of thirty-three crus, or UGAs (Unità Geografica Aggiuntiva) throughout the Soave territory, and the allowance for producers to now use these crus when labeling their wines. When I first started exploring Italian wines, many years ago, I learned that within Soave Classico you had the town of Soave and its vineyards to the north with primarily western exposures and a warmer afternoon sun, while the vineyards north of Monteforte d’Alpone (the town further west from Soave) were exposed to the east and produced more lively and finessed wines. However, when you actually see the hills of Soave Classico, you realize very quickly that it goes so much deeper than that, as elevations, exposures and soils change quickly within only meters of each other. The fact is that producers such as Inama, Gini, Anselmi, Pieropan, Suavia and Pra', just to name some of the most well-known, have been taking full advantage of these distinct locations for decades now, whether it be blending them for balance or utilizing a distinct terroir to produce unique wines. That said, this organization of crus is still in its infancy, and it will take time and experience with the wines to fully understand how they will compare to vineyards like Froscà, Foscarino, Castelcerino, Carbonare, Rugate and Monte Grande which we’ve already come to know.

However, this doesn’t address all of the challenges. Like many regions that begin profiling specific crus, there’s bound to be certain areas that are simply too big or not homogeneous. A good example is the Ronca Monte Calvarina UGA on the region's extreme western border, which spans from 90 to 600 meters in elevation. Needles to say, any further definition of a region's terroir and study into what makes one vineyard different from another is a step in the right direction. It's important to note that some of the most historical producers, such as Gini, have been exploring the potential of crus within their crus for decades.

In the end, the biggest muddle remains the lack of definition within the larger Soave DOC. While you can look to the higher-elevations of Soave Colli Scaligeri or to Soave Classico for wines made assured of its volcanic soils and steep vineyards, when looking at the vast amount of Soave that finds its way onto retail shelves, it’s almost impossible for a consumer to know what to expect. Luckily, even the top producers offer an entry-level Soave that will not only provide readers an extremely pleasurable experience, but also do so at extremely reasonable prices.

Which brings me to the point that Soave has something for everyone. Readers will find fresh, stainless-steel or cement-refined entry-level wines to sip anytime, anywhere, along with Soaves that are aged for extended time on the lees. Barrel-fermented and matured versions can still be found, even as they have fallen out of fashion. Also, because of Garganega’s long growing season, some producers will pick as late as the end of October and produce Soave that’s made with late-harvest or botrytis-affected fruit yet fermented to dryness. Lastly, let’s not forget the sweet Recioto di Soave, which is made from air-dried grapes. The notes in this report will provide a good idea of what to expect from bottle to bottle, yet know that if you enjoy a wine from a specific producer, it’s worth looking deeper at their entire portfolio.

Soave has come a long way in a very short amount of time; having spoken and tasted with producers, toured their vineyards and listened to their idea of what the future of the region should and can be, I have total faith that the days ahead will be even brighter.

For lovers and collectors of the world's best white wines, it’s time to welcome Soave back to your cellars. 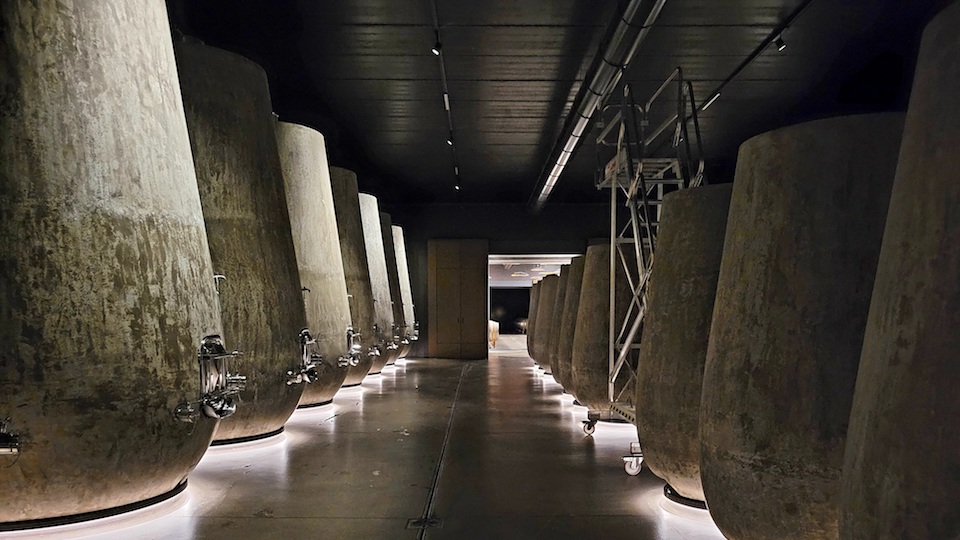 The concrete aging vats within the Pieropan cellars.

It’s important to understand that while on a map the Soave and Valpolicella regions appear to be very close, that they can experience very different climatic conditions from vintage to vintage. A good example being 2014, where the high-elevation and well-draining soils permitted a much more successful vintage. What’s more, Garganega is a late-ripening variety, with harvest starting around mid-September and lasting through the end of October, and so a hot and dry summer can often be balanced by a cool, extended harvest season. As such, I thought it prudent to include some details on the most recent vintage to be landing on retail shelves.

The 2020 Soaves show the sun-kissed fruit of the vintage, yet do so while displaying an energy and depth of character that promises many years of pleasurable drinking. Two thousand-twenty got off to an early start, as a mild and dry winter gave way to a very early bud break. Cool and rainy conditions through April and May slowed the maturity of the vines, resulting in a June flowering. While the summer months were very warm, well-timed precipitation and cooling evening currents provided even ripening, as well as health amongst the vines. Weather became more temperate and dryer going into the fall, with a slightly early start to the harvest on September 20th. While I don’t see 2020s being long-term agers, I do believe they will instead provide a very open and generous drinking window within the medium term of seven to ten years.

I tasted all of the wines for this report during a visit to Soave in January 2022, and then in our offices in New York City in February 2022.

Valpolicella & Soave: The Times, They Are A Changin’, Eric Guido, February 2021