Friuli Venezia Giulia’s Schioppettino is one of the world’s most interesting and potentially great red grape varieties. Schioppettinos are especially characterized by an enticing green peppercorn note that is extremely typical and juicy, bright, mid-weight frames. Ronchi di Cialla’s Schioppettino is an iconic and historic wine in the true sense of those words, and Italy’s finest expression of the grape.

The history of modern-day Schioppettino starts at Cialla, a small hamlet tucked away in the eastern reaches of the Friuli Colli Orientali denominazione. Though the variety has long been grown in the area around the towns of Prepotto and Albana (most likely since the 13th century), over the years it had been reduced to only a few sporadic rows of vines here and there. Nobody was making any mono-variety Schioppettinos until the late 1970s (and certainly none for commercial sale) when the Rapuzzi family of the Ronchi di Cialla estate, spurred on by friends Luigi Veronelli (Italy’s first serious wine journalist) and the Nonino family (distillers of Italy’s most famous grappas), launched the first Schioppettino wine. Success was such that nowadays many other estates have jumped onto the Schioppettino-production bandwagon, with wine critics and wine lovers also singing the variety’s praises loudly. 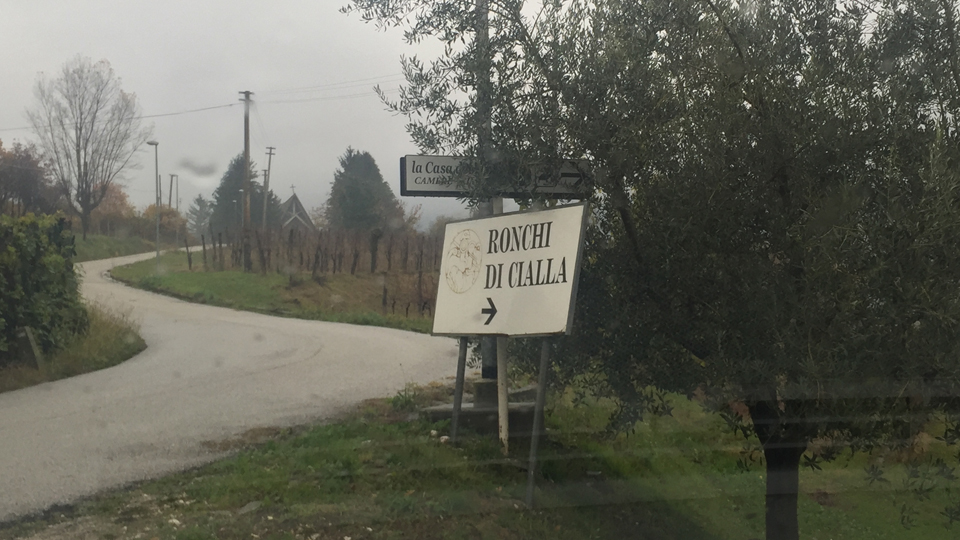 Schioppettino’s Rise From the Ashes

The Ronchi di Cialla estate was founded in 1970 at Cialla (the estate’s name derives from the Italian word ronchi, meaning a well-exposed hill with terraces, and the Slovenian word cela, meaning stream), a small group of houses located near the town of Prepotto in the Friuli Colli Orientali. Proprietos Paolo and Dina Rapuzzi opted for a lifestyle change when Paolo decided to get out of the rat race and his job at Olivetti to relocate on in the countryside.

The rediscovery of Schioppettino and the fact that today the wine is both sought after and produced by numerous estates in Friuli Venezia Giulia is a feel good story that shows what human passion, hard work, vision and friendship can bring. Rapuzzi, who was fond of old books and had built up quite the library of old texts, was aware that Friuli had always been the home of many grape varieties that by the 1970s had all but disappeared from the countryside he so enjoyed strolling about. However, he also realized that some of those rare varities he had heard or read about were still hanging on for dear life in gnarly old vineyards, and he longed to do something on their behalf. He began speaking about what could be done with the Mayor of Prepotto, Bernardo Bruno, who, in Rapuzzi’s estimation, owned about thirty of the only seventy or so Schioppettino vines he believed were still alive in the area. Things improved mightily, and Schioppettino’s future became suddenly a whole lot brighter in 1974, thanks to Benito and Giannola Nonino. While searching for pomace of the Schiopettino and Ribolla Gialla varieties (the husband and wife team wished to begin making mono-variety Schioppettino and Ribolla Gialla grappas much as they had first done with Picolit the year before), they became aware that while many producers in Albana, Prepotto and a few other areas within the Colli Orientali (including the likes of Rieppi, Marinig, Bernardo Bruno, and over in the area of Dolegnano, Count Trento) were still growing scattered rows of Schioppettino out of habit and tradition, the variety was effectively an outlaw, as it was not officially authorized for cultivation. This because it hadn’t been inserted into the list of Italy’s official wine grapes by the Ministry of Agriculture (in fact, when Rapuzzi had broached local authorities about making and bottling a Schioppettino wine for commercial sale, he was told in no uncertain terms that to do so would mean the risk of jail!). And so, in 1975, with what now clearly appears to be uncommon and admirable entrepreneurial spirit and foresight, the two Noninos decided to launch their own, brand new, awards ceremony, called “Premio Nonino Risit D’Aur”, meant to celebrate and promote the work of Friuli’s people, as well as the magic and uniqueness of their beautiful region. In this respect, the objective of “stimulating, rewarding and recognizing officially the ancient Friuli varieties, including Schioppettino” was of paramount importance. Giannola Nonino tells me that it was more or less at the same time that she also moved to have Schioppettino officially recognized as a wine grape, and initiated the bureaucratic proceedings to have it recognized as such. The first edition of the Risit d’Aur saw a number of awardees: amongst them, none other than the Rapuzzi family, who were selected for their courage in planting a grapevine with no guarantee they would ever be able to make and sell wine from (this because of Schioppettino’s status of “non-officially recognized variety” at the time of planting; in fact, Rapuzzi’s first official vintage of Schioppettino was only the 1977). Other awardees that year included Luigi Bolzicco of the Count Trento di Dolegnano estate, where Schioppettino had been cultivated and preserved since the 1800s, and Prof. Guido Poggi, the author of an erudite, then state of the art, historical, ampelographic, and technical treatise on Schioppettino. 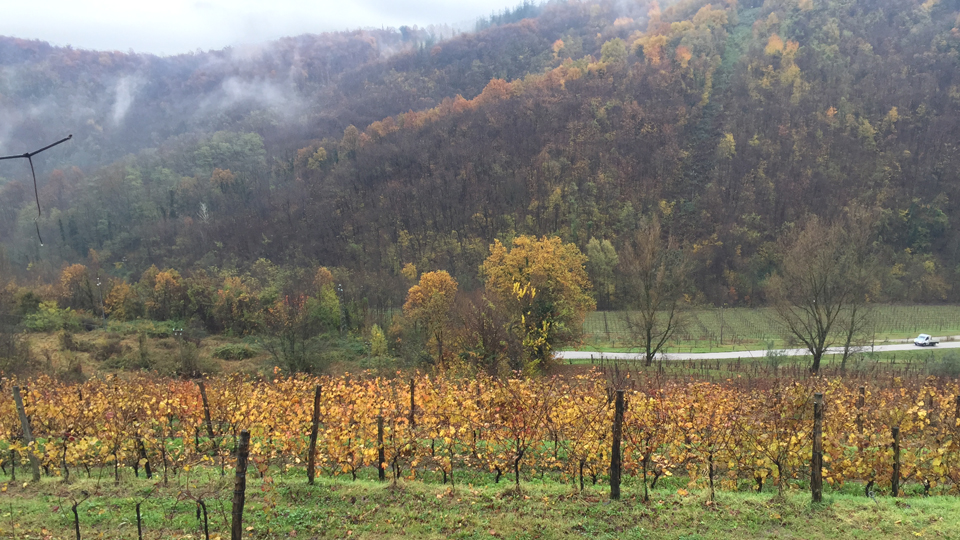 The view from Ronchi di Cialla

Paolo Rapuzzi began selecting old Schioppettino vines in Bernardo Bruno’s vineyards and elsewhere too (I distinctly remember Rapuzzi telling me years ago that he had also gone looking for Schioppettino as far as Slovenia, where the cultivar is called pocàlza; apparently, he didn’t find any Schioppettino vines he liked there). In any case, by 1975, Rapuzzi had planted about 3500 Schioppetino vines at Cialla (again, this was a completely illegal vineyard at the time); still, the wheels had been set in motion for Schioppettino’s rehabilitation and it was soon recognized as a variety that could produce high quality wines. In one of life’s little ironies, Orfeo Salvador, the government official who had first warned everybody that to proceed with Schioppettino planting and wine production might result in jail time was amongst the first to grasp the silliness of the existing situation and, to his credit, moved quickly to have Schioppettino admitted into the national registry as an officially recognized wine grape. The rest is history. Over the next twenty years, Italy’s main nursery at Rauscedo obtained cuttings from Ronchi di Cialla and propagated them, so much so that a good majority of the Schioppettino planted today in Friuli Venezia Giulia derives from the old vines first selected by Rapuzzi. Furthermore, the University of Udine has studied the variety in depth, identifying roughly thirty different biotypes of Schioppettino, all of which have been grown and studied at Cialla.

Sadly, Paolo Rapuzzi passed away a few years ago, but I will be forever grateful for all I learned from him about the Colli Orientali, its varities and the wines made there on the occasions I visited him and his family at their beautiful hilltop home in Cialla. Today, Rapuzzi’s sons Ivan and Pierpaolo, along with his wife Dina, are strong advocates for Paolo’s work and legacy. They continue to produce distinctive wines from native Friuli varieties such as Schioppettino, Picolit and Verduzzo (the latter was a real favorite of Paolo’s). Ivan and Pierpaolo are taking this passion for native grapes a step further and have begun producing an outstanding, delicious mono-variety wine from Ribolla Gialla as well, a variety Paolo was slightly less enamored of. 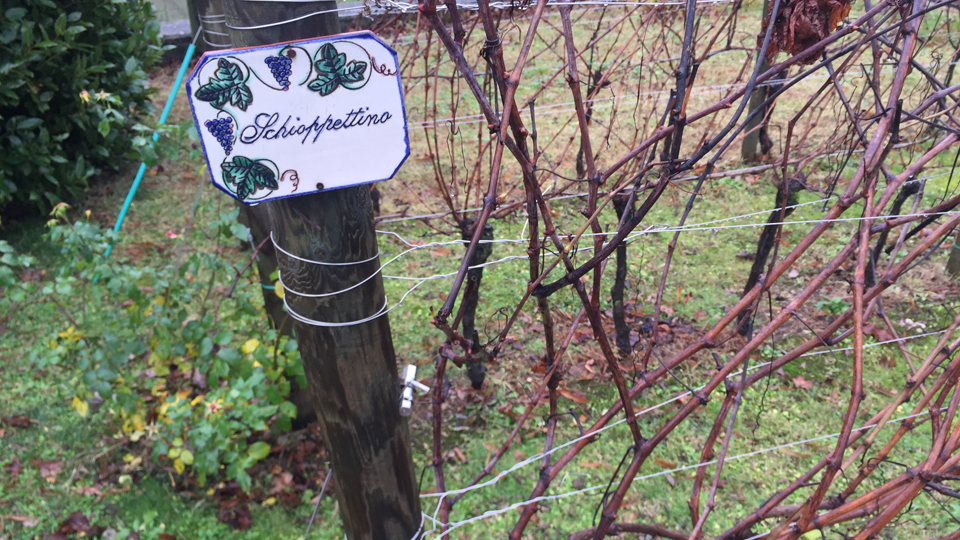 Ronchi di Cialla’s first vintage was 1977. Prior to that, things had gotten very difficult, as the tragic earthquake that hit Friuli hard in 1976 destroyed the cellar, which forced the family to start over again. Today, the estate owns 28 hectares (69 acres) of which eight hectares (19.7 acres) are planted to Schioppettino. Ronchi di Cialla currently cultivates six different biotypes of Schioppettino for commercial production, but others are being evaluated. The estate’s annual production is of roughly 100,000 bottles, of which less than one quarter are Schioppettino. Ronchi di Cialla produces two different wines from Schioppettino: 8-12,000 bottles of the Schioppettino di Cialla, the estate’s most famous and age-worthy red wine (and the subject of this vertical); and another 10-12,000 bottles a year that are labeled “Ribolla Nera” and made from the estate’s youngest Schioppettino vines (Ribolla Nera is a synonym for Schioppettino that was historically used more commonly outside of the immediate Prepotto-Albana-Cialla area). It is especially noteworthy that from the start, Rapuzzi set aside anywhere from 500-1000 bottles of Schioppettino di Cialla each vintage in order to release wines for sale years later. Consequently, and a real rarity in Italian wine circles, the estate now has over 60,000 bottles of older vintages resting in their cellar. 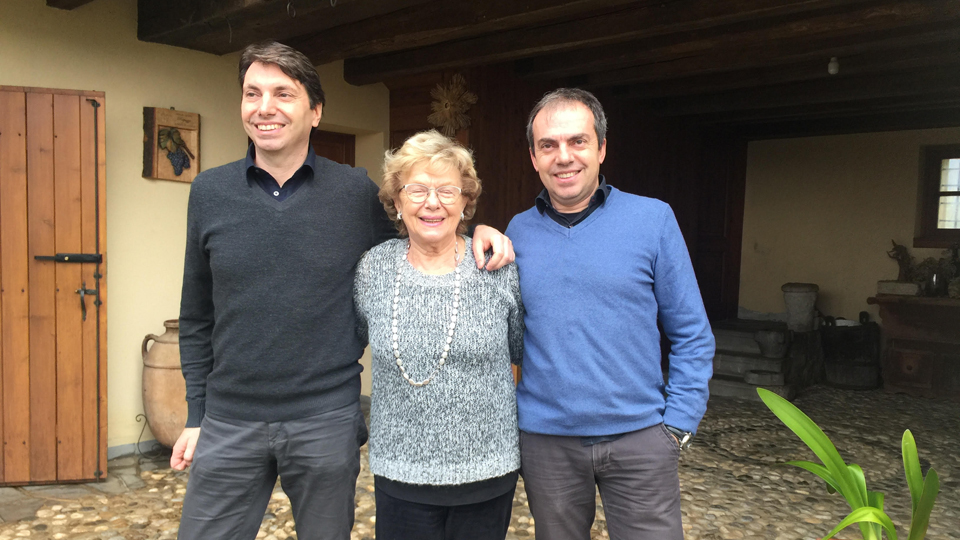 One look at the Schioppettino grape and you couldn’t be blamed for wondering what all the fuss is about. Large bunches and round, big berries make for something that could double effectively as a table grape. Schioppettino’s plethoric looks are not those one typically associates with the world’s best wine grapes. A red grape, it behaves like a white grape: “… and we found out the hard way, because it does less well in extremely hot vintages when most other red grapes perform best” laughs Pierpaolo Rapuzzi. Schioppettino needs to grow in cooler microclimates because its relatively thin skins suffer from sunburn easily. Even worse, hot daily temperatures blunt the crisp, fresh blue and red fruit aromas and flavors and impede the formation of the spicy green peppercorn aromas and flavors this variety and its wines are so famous for. Naturally very rich in rotundone, a molecule also associated with Grüner Veltliner and Vespolina that characterizes wines with a strong spicy, peppery note, a well-made Schioppettino is a thing of beauty. Despite its looks, in the right hands Schiopettino is able to weave an uncanny amount of liquid magic. 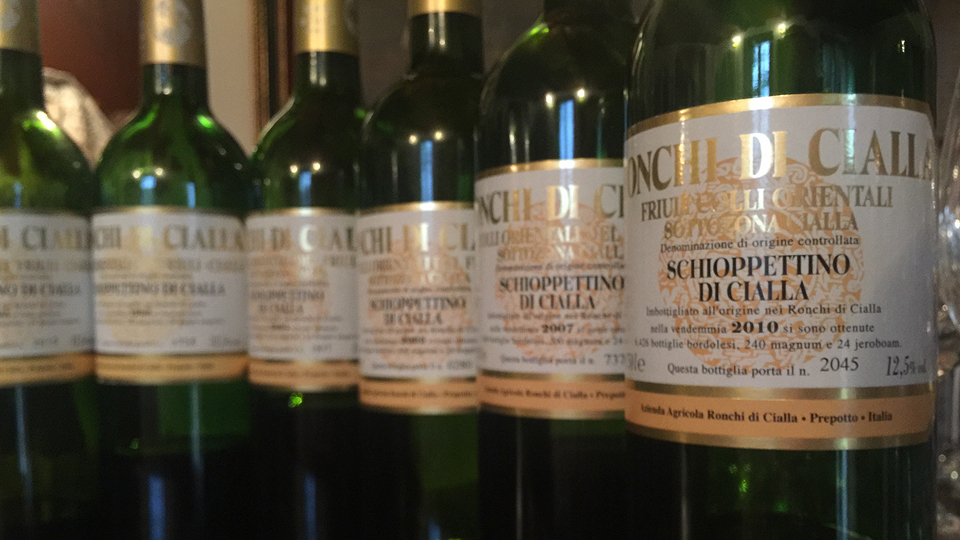 Not much has changed at Ronchi di Cialla since the days Paolo Rapuzzi was in charge. Winemaking is relatively straightforward. Forty-something Ivan and Pierpaolo both studied at the alimentary sciences department of the University of Udine, which has since renamed the enology faculty. The Schioppettino di Cialla grapes macerate about 20/25 days, while the maximum temperature never exceeds 26/28°C. Because Schioppettino is a late ripening variety, grapes are picked around mid-October in most years. Not surprisingly, macerations of the simpler, earlier maturing Ribolla Nera wine are much shorter (12-14 days) and maximum temperatures climb higher, to roughly 28/30°C, to make a fruity, easygoing wine that is accessible early. Initially, the Schioppettino di Cialla was aged in Slavonian oak barriques, but the estate changed over to mainly French oak at the end of the 1970s. Today, the wine ages 16-18 months in small, mainly French oak barriques depending on the vintage (about 10% Slavonian oak is still used). New oak is held to a minimum (roughly 10% new oak every year).

The following wines were tasted at the Ronchi di Cialla estate in November 2016. All bottles were sourced from the estate cellar except for the 1982, 1990, 1994, 2008 and 2009 which came from my own cellar, from where they had not moved since the day I bought them upon release. In what amounts to another Vinous first, the following report is the most complete vertical tasting of Schioppettino Ronchi di Cialla presented in a major English language wine publication.

View All the Wines Tasted from Youngest to Oldest