There are few wine producers who are more important in Italy than Costantino Charrère, owner of Les Crêtes, which translates into “the crests” or “the peaks” in recognition of the mountainous terrain that is one of the many defining attributes of the Valle d’Aosta, a tiny region sandwiched between northwest Italy, Switzerland and France. In addition to his innate ability to make great wines, Charrère must be commended for his unique dedication to his beautiful region’s local native grapes, many of which would have been lost forever had it not been for the work he has done in conjunction with the Institut Agricole Régional, or IAR, a research, teaching, viticultural and wine-producing center in the Valle d’Aosta.

My own interest in native grapes was in no small measure a result of tasting Charrère’s wines and getting to know him at the beginning of the 1980s. At the time, I was just starting out in the world of wine and yet he always had time for me, and also spoke well of his colleagues and encouraged me to visit them. Charrère, whose family is of French origin and moved to the Valle d’Aosta in the 1700s, was always fascinating to listen to. It was thanks to him that I was able to taste my first mono-variety Prëmetta wine (then bottled with a white Costantino Charrère label, as he did not establish Les Crêtes until 1989), and Fumin too – a light-on-its-feet, yet deep and ageworthy red variety that grows only in the Valle d’Aosta. I was also able to learn about and taste wines made from other previously unknown grapes such as Petite Arvine and Mayolet – the former a native of Switzerland’s Valais region that has taken extremely well to the Valle d’Aosta’s soils, the latter an exceptionally interesting red variety that is a nightmare to farm because of its very compact bunches that yield delightful medium-bodied, pungently aromatic red wines. 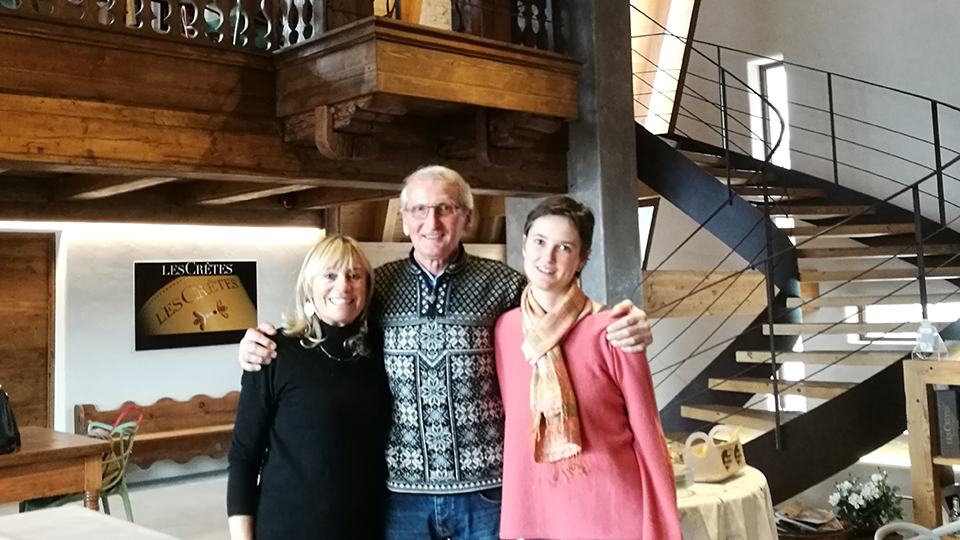 From the beginning, I recall Charrère being especially sold on Fumin, a variety that many old documents mentioned as being the Valle d’Aosta’s potentially best red wine grape. In truth, Fumin’s lofty reputation was in no small measure due to the fact that it tolerates chilly weather well and could be planted in very cold north-facing sites at a time when climate change had not yet arrived. A very late-ripening variety characterized by tough skin, Fumin was regularly harvested under the snow in November. But the variety’s potential for producing serious, cellar-worthy wines had never been fully realized because of the winemaking difficulties Fumin poses. It’s a very reductive variety, and unless care is taken in the cellar, extremely stubborn off odors reminiscent of wet animal fur – what the valdostani refer to as ventre de lièvre, or “hare’s belly” – develop almost inexorably.

In fact, it was the region’s winemaking in the 1970s and early 1980s that needed a retooling. For example, I distinctly remember that many of the region’s Torrette wines (Torrette is made mostly from Petit Rouge but usually includes a percentage of Fumin) were also marred by off odors. Clearly, because little academic study had been done on the region’s grapes through most of the 20th century, such difficulties can hardly be surprising. Fortunately, the IAR’s establishment of a regional nursery and its clonal selection program were a huge boost for the region, and better genetic material became available by the mid-1990s, which also helped reduce the amount of funkiness in Fumin wines.

The rest, as they say, is history. Over the years, a younger generation of winemakers began to take over direction of their families’ wineries. They looked to Charrère’s work and sought to emulate his success. As a result, a number of gorgeous, age-worthy Fumin wines began to appear in the market. Although I strongly believe that there are other as-yet little-known grape varieties native to the Valle d’Aosta that have as much quality potential as Fumin (Vuillermin immediately springs to mind, as do Cornalin and Mayolet, and production guidelines allow up to 15% of other Valle d’Aosta grape varieties in Fumin wines), there is no doubt that Fumin is the soul of most of the region’s best reds today. 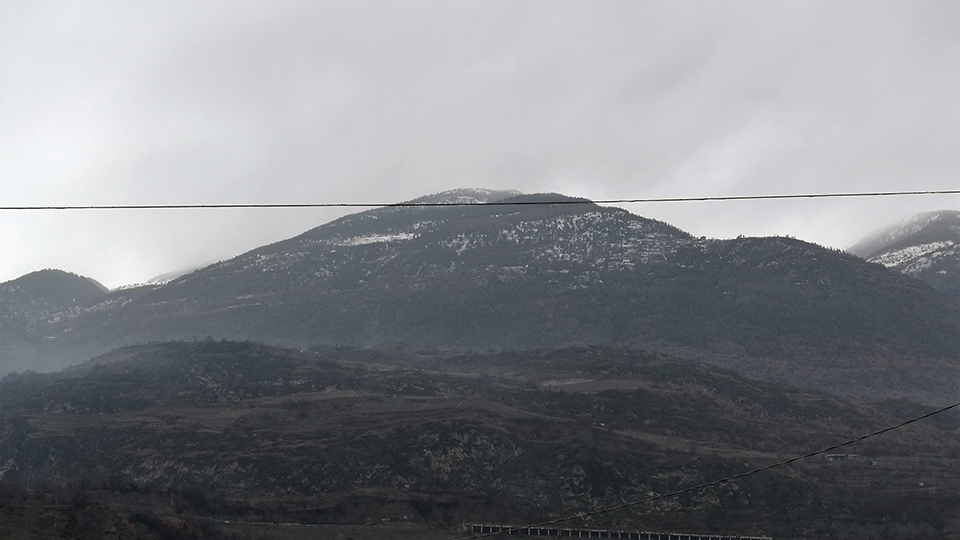 The evocative landscapes of the Valle d’Aosta

The first official vintage of the Les Crêtes Fumin was 1993, but Charrère had been growing Fumin and experimenting with different bottlings from the early 1980s. His father, Antoine, had long produced a mono-variety Fumin for home use and he pushed Costantino to try to make one in commercially viable quantity. Because of its thick skin, Fumin can give very tannic wines, and Charrère’s father rightly believed that the wine was in need of long bottle aging prior to being sold. Always the pragmatic sort, Costantino focused on making a wine that would be ready to drink sooner, and so he began experimenting with harvesting Fumin later – in fact, picking super-ripe grapes – by letting the fruit hang in his vineyards as long as the weather allowed. In vintages in which the weather did not cooperate, partly or completely air-drying the grapes was the obvious solution. This latter approach is still practiced nowadays in the region, including by Les Crêtes, although in my view using air-dried Fumin grapes makes for less interesting and less refined wines.

Today, Fumin is generally recognized as the Valle d’Aosta’s most important red variety, but Charrère is convinced that Fumin and its wines will become better known outside of the region’s boundaries too. “It is absolutely a noble grape and its wines are some of the most interesting I have ever tasted,” Charrère told me during my visit to the winery in February of this year. For the moment, the single most important impediment to wine lovers becoming more aware of Fumin’s quality and sundry charms is that too little is available. For example, Charrère only made about 2,800 bottles of the 1994 vintage, and annual production even today is still a paltry 6,500 bottles or so. In the 1980s and 1990s, Charrère grew Fumin in several vineyards, and so the first few vintages were made via a selection of the oldest vines in multiple vineyards. Then, for several years Charrère made his wine from a single vineyard, the Vigne la Tour. More recently Charrère has gone back to sourcing fruit across several sites...

As a general rule, Charrère picks the grapes in late October, keeps them on their skins for about 12 days and performs frequent pumpovers. He keeps the maximum fermentation temperature fairly low (around 70 degrees Fahrenheit) and puts the wine through malolactic fermentation directly in 30-hectoliter barrels. From the start, Charrère chose to age his Fumin wine in used barriques only, but with the 2015 vintage he adopted a new aging regimen: 9 to 12 months in oak, depending on the vintage, of which 60% is large barrels and 40% used barriques. 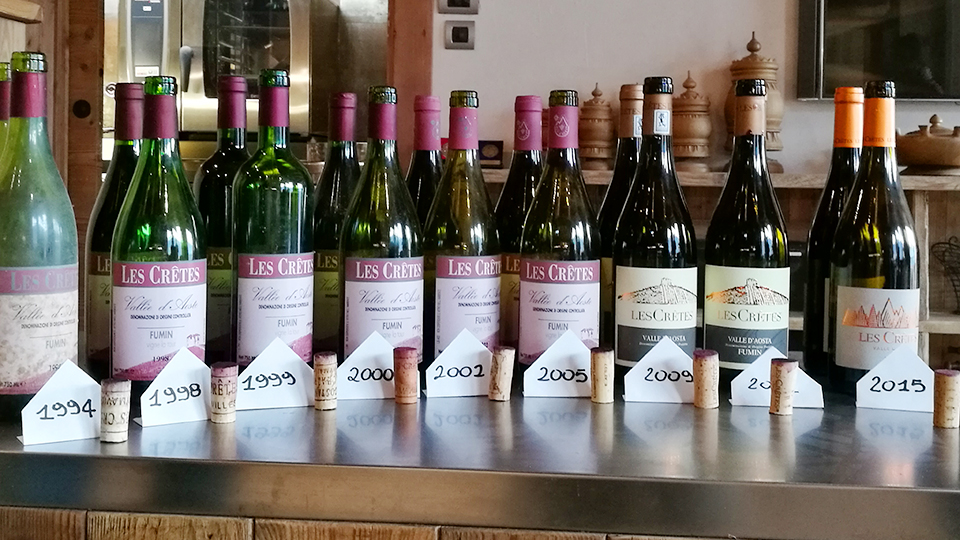 Tasting Les Crêtes’ Fumin back to 1994

A good Fumin is characterized by a deep ruby-purple color (much darker than wines made with Nebbiolo or Sangiovese) and smells and tastes of strawberry, blackcurrant, violet and rose, with characteristic peppery and delicate smoky accents. In fact, the variety’s defining feature is a strong black pepper and spice element, along with medium body and high acidity. Be aware that while modern vintages of the Les Crêtes Fumin are 100% Fumin, older vintages could include up to 10% to 15% of other grapes in the blend, such as Mayolet or Syrah, depending on the vintage and on Charrère’s intuition as to what blend would make the best possible wine. I find that the Les Crêtes Fumin pairs remarkably well with stews and grilled meats, especially when there is a slightly smoky, sweet element to the stew, or a similar tasting glaze or sauce accompanying the meat. In my experience, Fumin wines age well for up to 15 years but are generally at their best between 5 and 8 years after the vintage.

I tasted the following wines at the winery with Charrère in February of this year, except for the 2006, which I subsequently pulled from my own cellar in Rome.

See all the wines from oldest to youngest