Oslavia is one of the most soulful, evocative places in Italy. The road from Gorizia winds up slowly into the hillsides. The signs are in both Italian and Slovenian, as they are in many places along the border that was once dotted with checkpoints. Pretty soon, the huge war memorial comes into view on the left, a poignant reminder of the blood that was shed here during World War I, when these hillsides, lined with trenches, saw bitter fighting and devastating losses. A bit further up the vista opens up and the scenery becomes more bucolic as vineyards come into view. To the right, Slovenia looks like it is a stone’s throw away. In fact, most cell phones pick up the Slovenian carriers from here. A few more twists and turns lead to the Radikon estate. It was there that I met Stanko Radikon many times over the years. 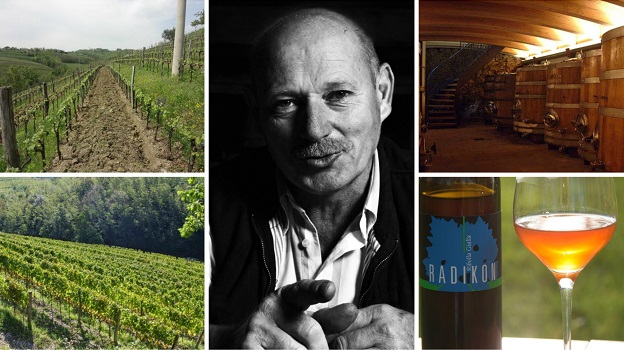 Stanko Radikon was a man of purpose and deeply held beliefs. Like many of the producers in this part of Italy, Radikon also carried a sense of gravitas acquired over many years of fighting against convention and dealing with the scorn his wines received in some circles. Reminders of the struggles this land had seen in the past were never too far away. Radikon’s whites, macerated on the skins and aged for several years in cask, were much more like red wines than whites. Occasionally Radikon released his Merlot, but only after many years in the cellar. Time marched to a different rhythm here.

Radikon was always extremely generous with his time. I remember tasting through every cask in the cellar with him on many occasions. One very cold, November day, our tasting wrapped up around lunchtime. Radikon invited me to share a meal with his workers. It was a simple lunch served in the kitchen of his home. Radikon opened up a few vintages to go along with a rustic meal of braised pork and mashed potatoes. It was a key moment in my understanding of the symbiotic relationship between food and wine both grown in the same place. More recently, I felt like quality had dropped, perhaps a reflection of the health issues that had afflicted Radikon for some years.

In the meantime, Radikon’s son, Saša, has grown into a young man and is now running the family estate with his own slightly different take on the style of wine that brought his father so much attention. I would like to extend my deepest condolences to the entire Radikon family.