Manni Nössing is one of Italy’s most talented winemakers. In fact, all his wines are so good that it’s virtually impossible to pick the best of the lot, or even a favorite (although individual taste preferences will undoubtedly help guide that decision). Nössing’s most famous wine is his Kerner. In my view, the Müller-Thurgau Sass Rigais is just as good, while the Sylvaner his most underrated wine (sometimes I think by Nössing too). Au contraire: The Sylvaner deserves much better, as it’s absolutely gorgeous, age-worthy, and remarkably pure, easily ranking with the best Italy has to offer in white wine. In fact, as great as all his wines are, it’s Nössing’s Sylvaner that leaves me mouth-opened and speechless almost every vintage. 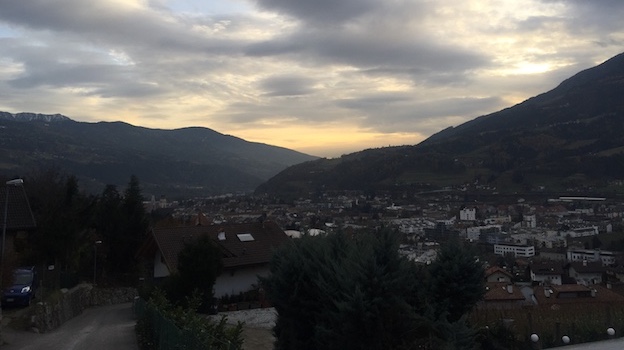 A view of the Valle Isarco from Nössing's estate

The Valle Isarco is a narrow alpine wind swept valley running diagonally from Bolzano towards the northeast; by the time you reach Bressanone, Austria is only about twenty miles away. Although mountain areas are usually associated with cold weather, it can get extremely hot in Alto Adige, especially during the dog days of summer. Even though the Valle Isarco doesn’t quite reach the high temperatures that Bolzano does (usually one of Italy’s three hottest cities in August and only about a forty-five minute car drive away from the Valle), global warming, which was a big help in getting grapes to ripen only ten years ago, is now becoming a big problem in the Valle too.

Nössing is the acting president of Eisackthal (Valle Isarco in German) Wein association which aims to spread the wine and food culture of the Valle Isarco. There are forty to fifty members including producers, restaurateurs, and the local tourism office, all working together to promote this beautiful part of Italy. And promote it they should, since the area and its wines are nothing short of breathtaking.

The full name of the winery is Hoandlhof-Manni Nössing, but as that is fairly unpronounceable for anyone but native or enthusiastic German speakers, most people refer to the estate simply by Nössing’s name. The winery is perched (literally) atop a steep hill in the pretty town of Bressanone (or Brixen, in this rather Germanic neck of the Italian woods) and doubles as the Nössing family home. Getting there is best attempted with a smallish car, as you’ll find yourself driving through very tight, steep, hairpin curve-infested pretty little streets (over the years, I have always wondered about what sort of automotive gymnastics might be required if a bus or large truck ever happened to come down the hill while I was driving in the other direction; rather thankfully, I haven’t had to find out yet). However, the drive is worth it, for once you reach the journey’s final destination you are met not just by Pablo (Nössing’s very likable, friendly dog, a Labrador now getting long in the tooth but that has been a cute fixture of the estate ever since I can remember) but also with a beautiful view of the Valle Isarco, which sprawls out below. Surrounded by the steep and absolutely beautiful slopes of the Dolomites, a cool breeze always present especially when evening comes, you realize right away why making fresh aromatic whites should be de rigeur here. 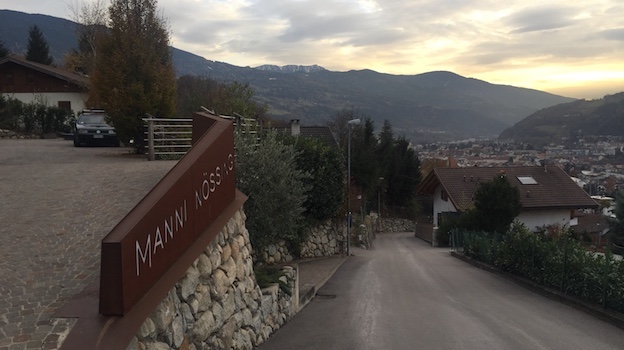 Although Nössing’s estate is Brobdingnagian in terms of wine quality, it’s pure Lilliput size-wise. Nössing owns only 5.5 hectares (13.6 acres) and rents two more, a situation common to the majority of Alto Adige wine estates, a region where individual vineyard holdings are on average so small that cooperatives rule. Nössing has been estate-bottling only since 2000, when he made the decision to do things his way, prior to which his the family sold grapes to the nearby Abbazia di Novacella. You might say Nössing has never had to look back. Over the years his outstanding wines have reaped, quite rightly, countless awards and high scores everywhere.

Today, the estate’s average annual production hovers at about 50,000 bottles a year (40,000 in 2015 because of difficult flowering and an extremely rare hail episode that wreaked havoc in July). Only 4,000 bottles a year are of Sylvaner, a sadly unfashionable grape which lately has started running the risk (perish the thought) of being replaced in the area by Riesling and even Sauvignon Blanc, neither of which is traditional to the Valle Isarco nor yield especially memorable wines here. So my hope is, given just how good Valle Isarco’s Sylvaner wines can be, that Nössing (and all his Valle Isarco colleagues, for that matter) will increase, rather than decrease, planting of Sylvaner vines and wine production in the years to come. After all, Sylvaner has been traditionally grown in the Valle Isarco for centuries, and has adapted perfectly to the area (as showcased by the many outstanding Sylvaner wines being made there), a fact that escapes most short-sighted advocates of always planting the latest “flavor grape of the month” irrespective of the quality that ends up in your glass. Just because the label on the bottle says Riesling, for example, doesn’t necessarily mean it’s going to be a memorable wine, or even a good one. Plus you can get great Riesling in many other parts of the world, while a great Sylvaner is a much harder find. 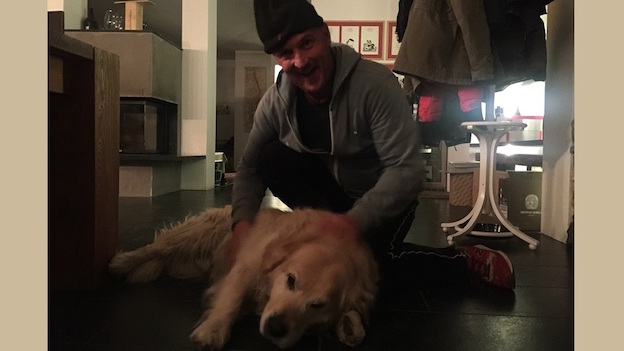 Manni Nössing and his dog, Pablo

Nössing has no formal training in either viticulture or oenology, but has a remarkable knack for making clean crisp wines. Hence, it’s not surprising to learn that he no longer de-leafs his vineyards, all of which are Guyot-trained and have mostly southern exposures (interestingly, most other growers in the area still do de-leaf, especially those who bring in their grapes to the coops). As Nössing doesn’t like white wines with high alcohol levels, he also tends to pick somewhat earlier than everyone else (already by September’s end and in October’s first days), including other local ultra-bright Sylvaner talents like Günther Kershbaumer of the nearby Köfererhof estate.

Clearly, the fact Nössing’s Sylvaner grapes are planted at roughly 660-700 meters (2,165-2,296 feet) above sea level is a big help and one of the keys in understanding why he manages to make extremely fragrant, high acid, refreshing wines. Actually, he doesn’t just harvest a little earlier, but does so quickly as well, with the hand-harvested grapes brought to the winery within 30 minutes or so and immediately de-stemms and gently presses. The must is allowed to settle for 24-48 hours, then undergoes controlled-temperature fermentation in stainless steel vats, a process lasting roughly ten to twelve days. After fermentation, the Sylvaner ages on the fine lees for eight months or more, a time period that Nössing has been gradually increasing over the years. Malolactic fermentation is avoided.

The Sylvaner vines were originally sourced from a nursery in Cornaiano and planted on about half a hectare. At two to ten years of age in average, vieilles vignes Sylvaner is not exactly what Nössing is working with currently (he had to replant a third of the vineyard because some of the vines weren’t growing properly, for reasons that aren’t entirely clear but probably had to do with uneven nursery material). Yet, in spite of these very young vines, Nössing’s Sylvaner wine is characterized by excellent and out standing precision, freshness, and breed, with a dainty mineral tang and piercing lemony-herbal aromas and flavors of noteworthy complexity and sneaky concentration. One sip of this wine’s best vintages, “pretty” and “class’” are the first words that come to mind. I can’t help but wonder the heights this wine will reach once the vines achieve old age. Nössing’s Sylvaner wines also tend to share a common thread throughout the years, with different vintages showing at least partly similar aromas and flavors (by contrast, Nössing’s Müller-Thurgau Sass Rigais, for example, appears to be more vintage-sensitive). 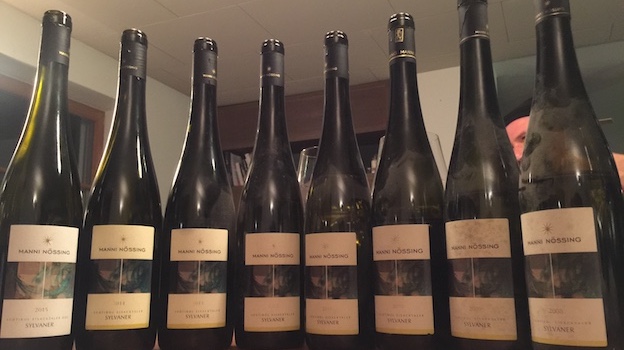 Clearly, Sylvaner is not the second coming of Riesling, but neither is it the second-rate grape variety that so many people often make it out to be. Sylvaner’s easygoing, charming qualities make it an ideal food wine that matches well with many fish, shellfish and vegetable dishes. It actually pairs remarkably well with difficult foodstuffs such as asparagus and artichokes, and blossoms with anything involving cilantro (the dish does too) with which the wine seems to have an uncommon synergy, each feeding off the other. So despite Sylvaner’s currently less than prestigious reputation, my hope is that people will give Nössing’s delightful and at times magnificent wine a try (as those of other producers), rather than lazily reaching for yet another wine made with a currently more fashionable variety. I guarantee the earth’s grape biodiversity, your taste buds, and the fortunate friends you’ll want to share this wine with will all be thankful you did.