Burgundy likes to make things as complicated as possible. It’s the Rubik’s cube of wine regions. For this reason, most Burgundy experts take a trip to the tattoo parlour to have a jigsaw of vineyards inked down their arms. I have the Côte de Beaune on the left arm and Côte de Nuits on the right. (Don’t ask me where Irancy is inked.) As my tattooist was drawing Mazi-Chambertin, he asked whether it was spelled “Mazy” or “Mazi”? So confusing. The answer is both, of course. We had the same quandary broaching Lavaux Saint-Jacques…or is that the more unorthodox Lavaut Saint-Jacques? Both identical, but in the end, it is a moot point when the wines are the calibre of those of Pierre Duroché. 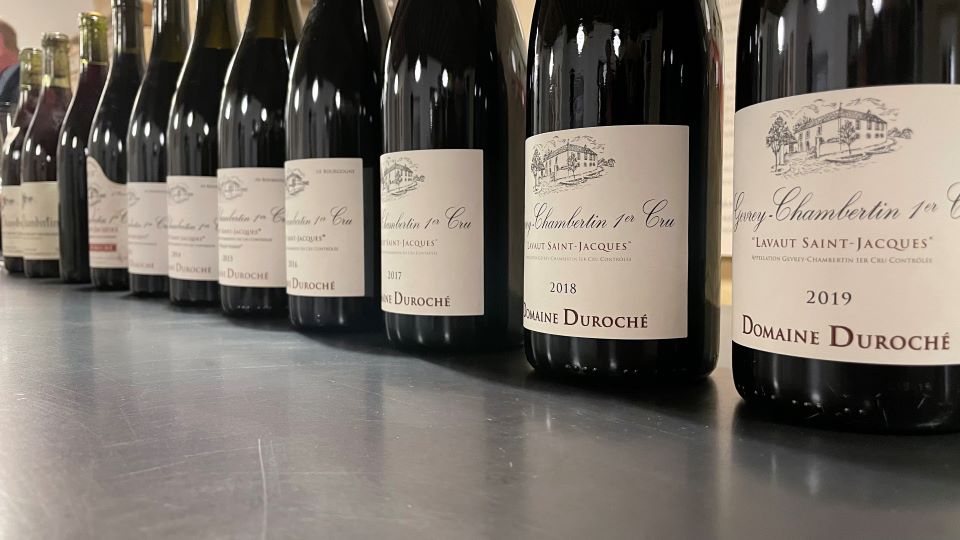 Last November, Duroché invited me to his winery/home in Gevrey-Chambertin for a fascinating vertical of Lavaut Saint-Jacques. I have played my own small part in Duroché’s ascent, waxing lyrical about his wines since I first encountered them at a blind tasting in Holland and visiting him soon after. So impressed by the wines, I began writing them up in my car before the following appointment.

The history of the estate stretches back to the beginning of the 20th century. Its timeline commences in 1906 when Louis Duroché became the first generation to cultivate a smattering of parcels. He was succeeded by Émile, who successfully and presciently bottled the first wines in 1933, then Philippe Duroché, together with his wife Odile, expanded their holdings to five-hectares. It was, in fact, Philippe who decided to use the “Lavaut Saint-Jacques” variation. Gilles became the fourth generation to farm the vines in 1973, bringing the family’s holdings up to a modest 8.5-hectares.

Gilles’s son, Pierre, spent a great deal of time in the vineyard when growing up and was awarded a scientifique baccalauréat when he was 18, followed by a BTS in oenology and viticulture in Beaune. Having spent months at Château La Gardine in Châteauneuf-du-Pape, he worked stages in Australia, California and Spain, though it was always his priority to learn about the terroir in Burgundy. He commenced working at the estate in 2003 at the age of 21, working alongside his father and taking full responsibility for the wines from the 2005 vintage. Together with his better half Marianne, who he met at the Rock Climbing Gym in Beaune, he set Duroché on an upward trajectory.

Pierre Duroché split his time between his two great passions: rock climbing and winemaking. Indeed, Duroché represented his country in rock-climbing competitions, but eventually he dedicated his entire time to turning grapes into wine, which given recent travails, is arguably riskier than dangling off a cliff edge miles above the ground. 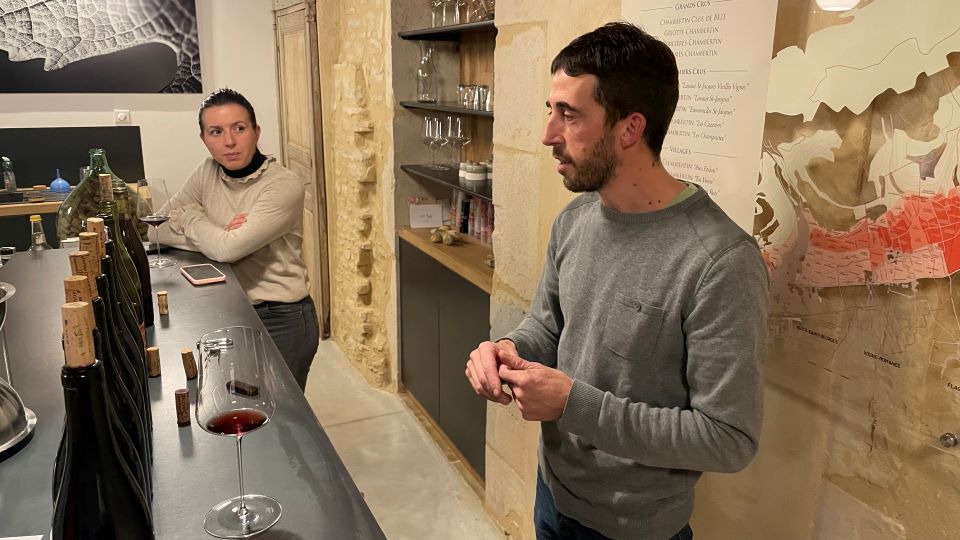 Pierre Duroché with his wife Marianne looking on and keeping him in order.

Duroché practices meticulous viticulture out in the diaspora of holdings that centre around his base in Gevrey-Chambertin, his Griottes-Chambertin probably the tiniest cuvée in the entirety of Burgundy, just a few dozen liters (he usually sends me a picture of the tiny vat each harvest to confirm that it does actually exist). Fruit is fully destemmed and undergoes moderate extraction using no sulphur or enzymes during vinification and little new oak during their relatively short élevage of 12 months without racking. Around 10% to 20% new oak is used for his Premier Crus, wood sourced mainly from the Cadus cooperage. “We buy around 10 to 15 barrels per year, so less than 10% [or our total stock],” Duroché tells me. “We use the new ones for our Bourgogne Rouge and Gevrey-Chambertin Village where many barrels are used, so the impact is minimal. For the Crus and lieux-dits with smaller quantities, we just use neutral barrels.” Wines are bottled without fining or filtration.

This vertical focuses on a single vineyard. Duroché’s holding in Lavaut Saint-Jacques comprises of six parcels that total 1.2025 hectares. Best to be precise as the holdings are so small. There are actually two cuvées. Duroché separates the oldest plot planted in 1923 adjacent to Clos Saint-Jacques to make a Vieilles Vignes cuvée. This is tended by horse and between one and three barrels are made. I asked Duroché the reason for splitting the vineyard. “We decide to separate Lavaut Vieille Vignes for the 2014 vintage. We just wanted to try to vinify it separately, just to see how it would turn out. It was a good success, so we decided to continue every year.”

The remaining parcels planted up until 1980 are blended to create the regular cuvée. It tends to be a late-ripening plot due to the cooling effects of the wind barrelling down the Combe de Lavaux. Lavaut Saint-Jacques is one of the appellation’s most prized Premier Crus, though that does not shield it from malevolent weather conditions. At time of writing, Pierre Duroché told me that he had just lost 40% of the crop this year to hail after a deluge of 200mm of rain the previous week that flooded several cellars. Like I said, winemaking or mountaineering, it’s contentious which is the riskier pursuit. 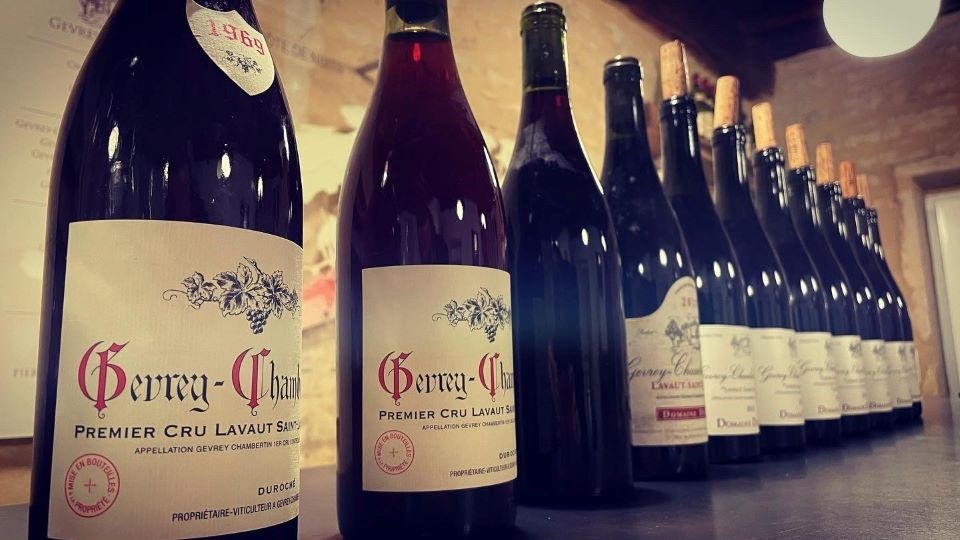 This tasting focused on recent vintages that demonstrate the heights that Pierre Duroché has taken his wines. They are more elegant and ethereal than powerful, but I find that people often make the mistake of pouring them straight from bottle, whereas decanting often allows them time to gain weight and depth. It’s inexplicable and quite miraculous – his wines’ innate ability to pluck mass from the ether. Duroché also kindly served some older vintages, and to be frank, I thought they highlighted the progress that has been made over the last decade. That said, I adored the 1969 Gevrey-Chambertin Lavaut Saint-Jacques that had the audacity to surpass my birth-vintage, 1971.

Before leaving, I cannot complain too much about multiple spellings. How many times am I referred to as “Neil” and not “Neal”? I supposed the only difference is that it is written Lavaut because Pierre Duroché’s grandfather decided upon that spelling whereas my father simply misspelled it on my birth certificate.