After a taxing day’s tasting and heated discussion about the 2017s at Burgfest, I should have retired to my hotel room to reflect on the wines. That’s not really my style. Instead, I jumped in my car and visited two or three producers that I was unable to visit last year after my autumn trip was curtailed by the lockdown.

One of my first ports of call was in Santenay to visit Domaine Jean-Marc Vincent. I have enjoyed his wines for several years but never managed to visit. Time to put that right! Together with his wife Anne-Marie, he greeted me outside their winery on a rather drizzly Tuesday afternoon. We immediately set about an instructive tasting of his latest bottled releases and one or two mature examples that were cleaved away for my Mature Burgundy article. 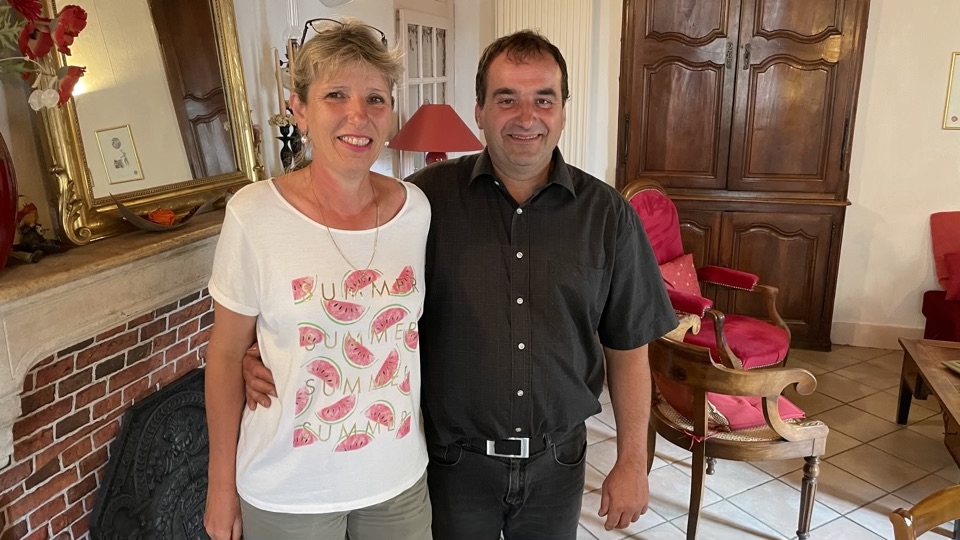 Anne-Marie and Jean-March Vincent at their home in Santenay.

I had been forewarned that Jean-Marc Vincent is the garrulous type. That was dead right. After five minutes, he apologised in advance for talking too much, but personally I welcome that when he has so many interesting things to say. “It is a family estate,” he explained. “My grandfather [André Bardollet-Bravard] had no successor, and so it was rented for 30 years when my father worked as a chemist. I felt that I had to take back the Domaine. I started with my wife in 1998 after my grandfather passed away the previous year. I knew nothing about this job so I taught myself, plus I was lucky to meet winemakers such as Olivier Lamy."

Like many, Vincent did not immediately convert his vineyards to organic and initially continued using chemicals, converting them towards organic viticulture incrementally. “I am close to organic, even though I do not have certification,” he told me. “From time-to-time I use one harmless spray.” One innovation that he used was a small caterpillar tractor rather than an overhead tractor to reduce soil compaction and introduced higher trellising. Also, inspired by Olivier Lamy, he has adopted high density plantings so that inter-vine competition can encourage growth of smaller berries and clusters. His self-explanatory Santenay “Les Vignes Denses” is planted at 14,000 vines per hectare. There have also been changes in the winery. “I use native yeasts with no SO2, which is added after 10 to 12 months for both white and red. I have managed to halve the amount of SO2.” He partially destems his reds, between 30 and 60%, eschews racking with modest new oak, around 20-25%. Vincent also told me that he is gradually moving towards greater use of demi-muids.

Jean-Marc Vincent said that he aims to “produce higher-quality fruit with less quantity”. Tasting through his range of whites and reds, it is clear that he is achieving that goal. Some argue that he excels with his whites, though I was impressed by both colours. The whites are taut and crisp with ample substance. Personally, I was seeking just a little more persistence with respect to his Santenay Les Gravières Blanc 1er Cru. His Santenay “Les Vignes Denses” is complex and surfeit with primal energy, whilst his Puligny-Montrachet Corvée des Vignes touches Premier Cru quality. With regard to the reds, do not overlook his outstanding 2019 Auxey-Duresses Les Betterins 1er Cru that Vincent tends to pick last each year. The Santenay Les Gravières Rouge 1er Cru was one of my picks from his range, cultivated on three types of limestone with crunchy red fruit and impressive structure, the kind of Santenay that deserves time in a cellar. The bottom line is that his wines are just delicious, and given the inflated prices you find elsewhere for less quality, I cannot recommend these high enough. I look forward to returning. 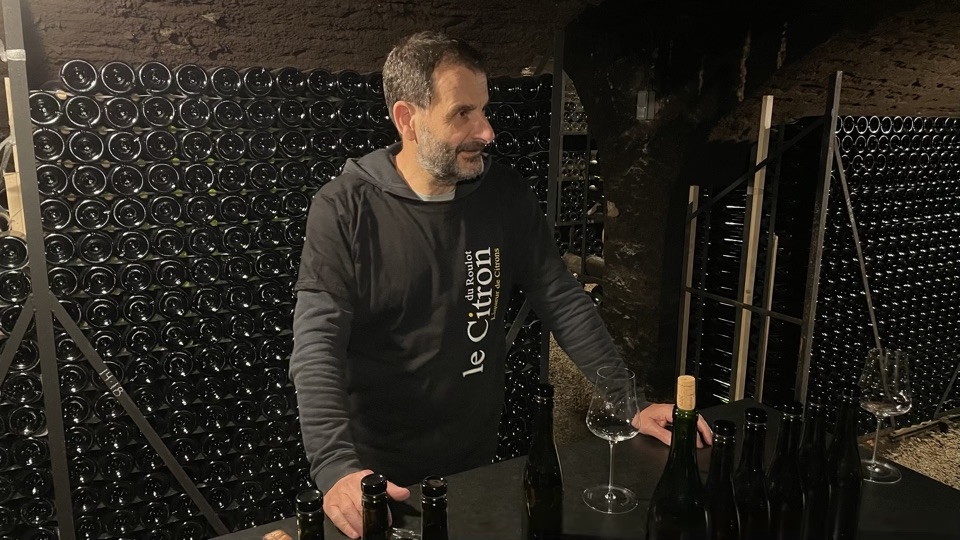 In the cellar with Jean-Marc Roulot explaining his 2019s.

My next port of call was to see Jean-Marc Roulot in Meursault. It was a pleasure to finally return and see the man in the flesh rather than in an episode of Call My Agent. “The 2019 vintage reminds me of 1990,” he told me. “The 2019s were aged in oak for 11 months with around 15% new wood for the Village Crus. I was a little worried in the beginning because I found little taste of the terroir, although this emerged towards the end of the élevage.” Roulot also told me that he employed more lees ageing this vintage. This was a good set of wines, especially at the top end courtesy of his Les Perrières and Les Charmes, also a superb Meursault Porusot. Perhaps on the entry-level side of his range, some of the cuvées missed some delineation, especially the Les Vireuils, due to the growing season, though Roulot’s wines always benefit from bottle age in order to reveal their individualities. So, find a cool damp cellar for four to five years before broaching most of these. 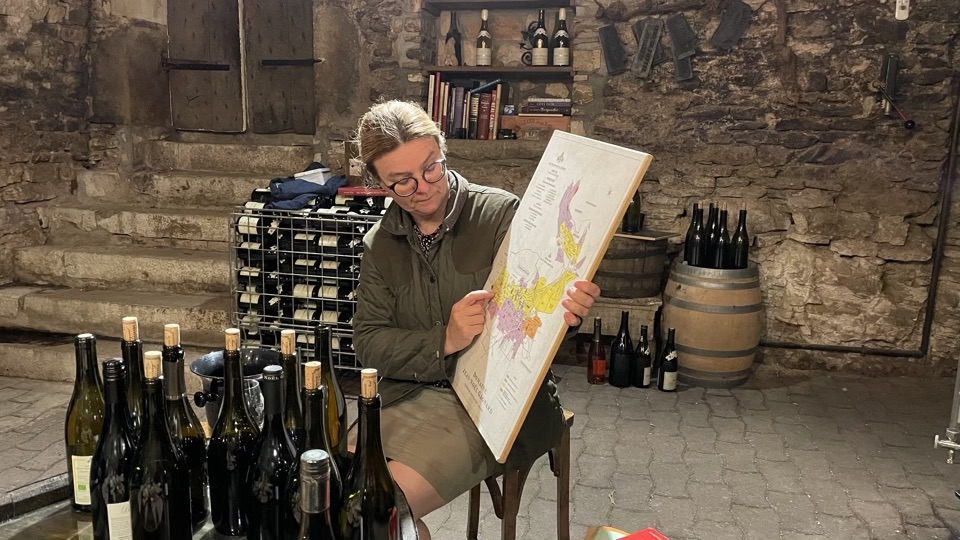 Winemaker Caroline L’Estimée indicating where her vineyards are located.

I also called in to see Caroline L’Estimée in Chassagne-Montrachet where she helms Domaine Jean-Noël Gagnard. This was another fine array of 2019s that had been bottled. Here, I was particularly taken by her Chassagne Les Caillerets, Clos de la Maltroye and Les Petits Clos. They will be difficult to resist in their youth. Also, don’t overlook her 2019 Hautes-Côtes de Beaune Blanc Sous Eguisons that she releases under her own name.

My final visit of the week was in Gevrey-Chambertin to visit Domaine Henri Rebourseau. This producer hit the headlines in December 2018 when Martin and Olivier Bouygues became majority shareholders, adding it to their vinous portfolio that includes Château Montrose in Saint Estèphe and Clos Rougeard in the Loire. Rebourseau had been run by Jean de Surrel since 1980 and despite an envious array of holdings, I must admit that I found some of the wines lacking, despite finally quitting machine harvesting in 2009. This was my maiden visit to the winery that was a hive of activity, a dozen roofers hammering away as they reconstruct the winery’s roof. The house is named La Brunelle, the same as the vineyard. Bénigne de Surrel, Jean de Surrel’s son, who now runs the estate with his brother Louis, told me that his grandfather was so proud of this vineyard that he would serve it to visitors in lieu of Grand Crus and used this cuvée to celebrate the end of the war. De Surrel was accompanied by a familiar face from Bordeaux, Hervé Berland. Tasting through their 2019s, incontrovertibly the wines are in a different league to those that I had tasted previously: cleaner, fresher, more chiselled with silkier textures. “I am looking for a smooth extraction, seeking the balance between dark and red fruit,” de Surrel told me. “The time of harvesting is crucial. In 2019 we picked from 10 September and then over the following ten days. But there is no standardisation of our wine. There is no recipe. We have changed cooperages to François Frères and Taransaud. All the alcohol levels are below 14.2°.” 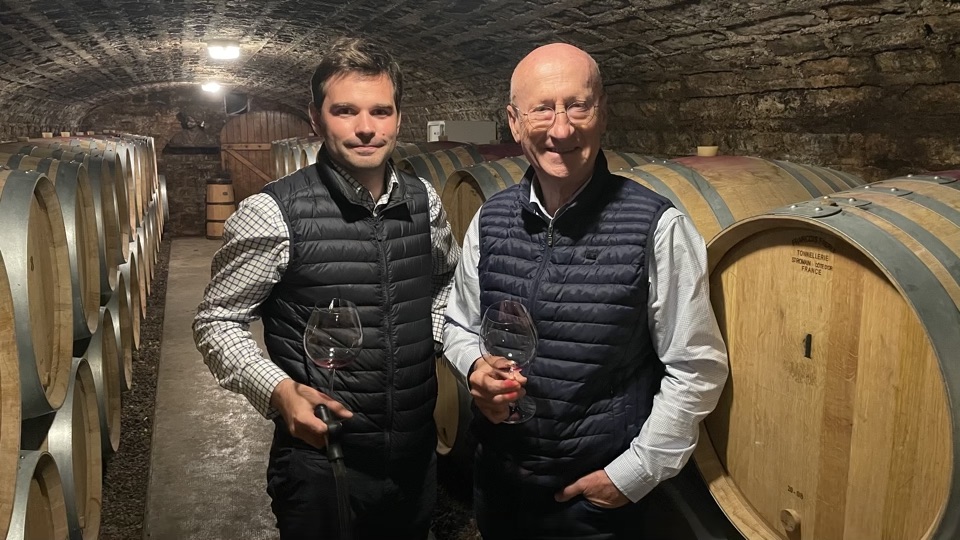 Bénigne de Surrel with Hervé Berland in their barrel cellar located under the main house in Gevrey-Chambertin.

There is no doubt that there is already a vast improvement in the quality of wines, as one would expect given their range of Premier and Grand Crus, plus the money that is being invested into the estate. I found judicious use of whole bunch throughout their range. Like Château de la Tour, they divide their Clos de Vougeot, parsing out their plots of old vine to make a Vieilles Vignes, and on this occasion, I found a noticeable difference, even if personally I would have used more whole bunch. Tasting the 2020 Clos de Vougeot from barrel later on, with and without stems, I certainly preferred them with stems. Certainly, this is a Domaine to watch in the future. There will be Burgundy purists who might shun this wine because they fear outside investment is diluting the spirit of the region. On the other hand, are they the same people that bought Domaine Rebourseau when standards were lower? Though I did taste several cuvées from 2020, I promised to return later in the year to make a more thorough assessment.