Next month, readers can expect my annual roundup of mature Burgundy bottles that have accumulated over the last year. Among them were a dozen notes relating to Mazoyères-Chambertin from Domaine Taupenot-Merme. Verticals of individual Burgundy cuvées are a precious currency, not only because of the scarcity of the wines, but because they present the opportunity to see how fluctuations in growing season, ceteris paribus, alter the resulting wine, since land, grape variety and, to a lesser extent, vinification technique are constant. This private tasting, hosted by UK merchants Stannary St. Wine Co., took place last October amid the flurry of barrel tastings in Burgundy, at La Cabotte restaurant in London. I will come clean: I mislaid my notes and thankfully discovered them recently. (Nothing irks more than a lost tasting note, which is why this absent-minded fool always frets about misplacing them.) The bottles were all bought on release by one of Stannary’s customers, a Burgundy-lover who generously shared them with likeminded oenophiles with all the accompanying exchange of views. 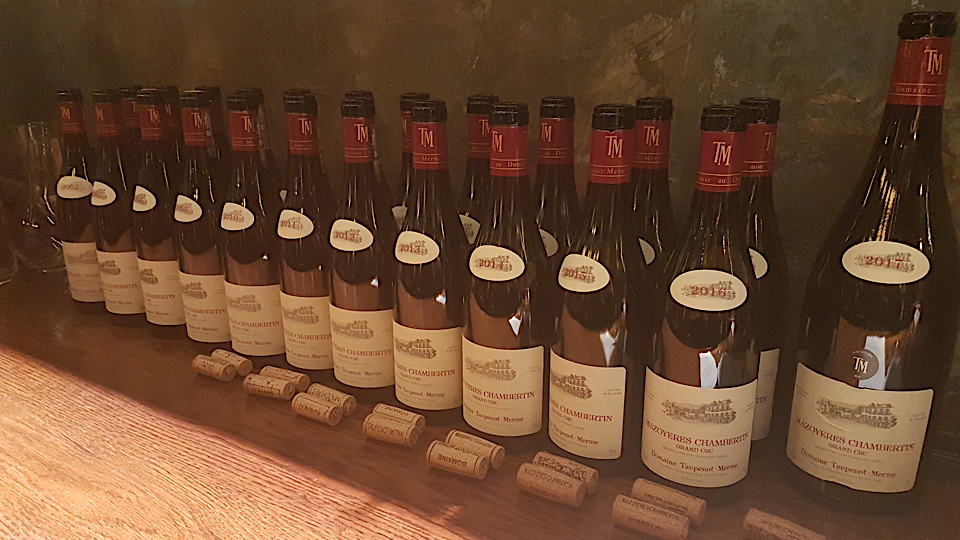 A bit of background first. Mazoyères-Chambertin occupies 18.59 hectares, just downslope from Latricières-Chambertin and adjacent to Charmes-Chambertin, whose familiarity has meant that for decades, producers have legitimately labeled their Mazoyères as Charmes-Chambertin. Are the two distinguishable? Well, it depends on the domaine, but generally I find Charmes-Chambertin more outgoing and perhaps “Chambolle-like” in style, whereas Mazoyères tends to have a touch more backbone and austerity, and occasionally more gaminess. The etymology of Mazoyères is obscure. It might derive from maisons, since there were settlements in that location many centuries ago. Winemaker and proprietor Romain Taupenot, who runs the domaine with his sister Virginie, told me that it does indeed come from old French dialect for masures, which means “huts” or “small houses.” 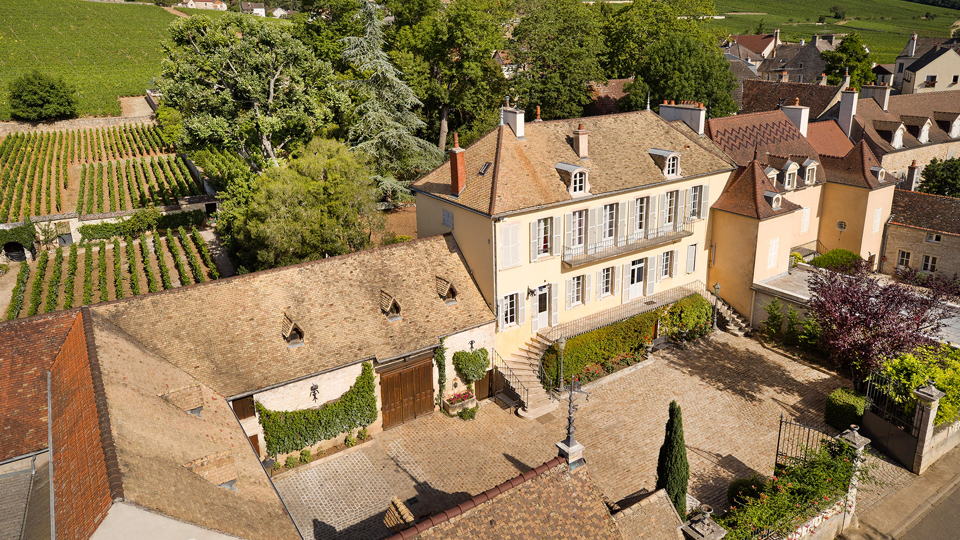 The courtyard housing the winery and family home in Morey-Saint-Denis.

One often-overlooked aspect of Taupenot-Merme is that its origins are tied with the domaine that lies directly opposite in Morey-Saint-Denis: Perrot-Minot. Christophe Perrot-Minot is Romain Taupenot’s cousin, and this explains the similarities in their respective holdings. However, I have found their styles quite distinctive: Perrot-Minot tending to be a little more upfront and bolder in style, Taupenot-Merme leaning slightly toward more red fruit and often a little earthier. What they have in common, apart from my admiration, is the unusual practice of vinifying their Charmes-Chambertin and Mazoyères-Chambertin separately, whereas most growers opt to blend their parcels together. Romain Taupenot told me that he began to vinify them separately from 2000. “Mazoyères is certainly more driven by the profile of Morey-St.-Denis,” he explained, “with multiple layers of black fruits, a floral touch and some spices."

He continued by explaining the geology of the terroir.

“This AOC, exposed to the east, is located at an altitude of 240 to 280 meters on a long slope placed on the hard rock with a few decimeters of brown earth resulting from silts and gravelly scree near the summit and limestone with variable clay content on the slope. On the part close to the Route des Grands Crus, there is thin soil resulting from the alteration of bioclastic limestones (calcaire à entroque), while toward the southeast the soil is more silt/clay, weak limestone. Here, the substrate remains to be determined. From a geological point of view, we find the Bathonian age near the summit, then the marls and limestone with crinoidal limestone (entroques) of the Bajocian age on the slope. Many marine fossils outcrop there, and stones on the surface come from the erosion of the Combe Grisard.” 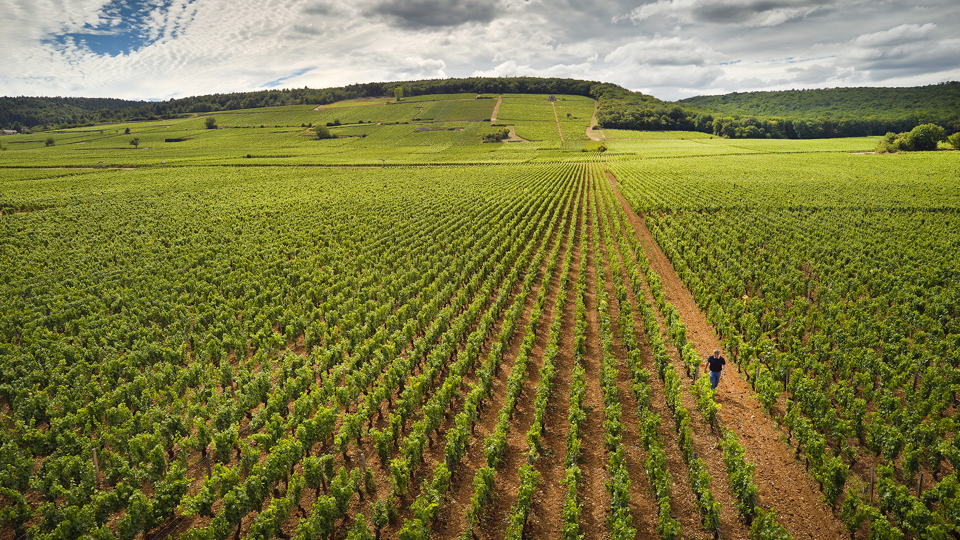 I wanted to find out a little more about the domaine’s particular parcel.

“The 0.86 hectares of vines were planted by my grandfather, Armand Merme, in 1958 and 1959,” he told me. (Merme was not alone in this; many winemakers planted after the spring frosts of 1956.) As you might expect given the family heritage, the parcel lies adjacent to that of Perrot-Minot. “Twenty years ago we made our own grafts through our own massal selection, and since last year, we have restarted to build our own library for massal selection, notably from the vineyards of Mazoyères. In between, I used the selection of very fine Pinots from ATVB. As for rootstocks, we have used SO4, 420A, a bit of 161.49 when removing a dead plant. We have been using 5BB for Mazoyères for five years.”

He continued by explaining his approach to vinification.

“The harvest date is generally determined by tasting the seeds of the grapes, a good indicator of phenolic ripeness. Harvesting is manual and after a severe sorting, the clusters are completely destemmed before undergoing a cold soak for about 10 days to extract flavors and color. All the stainless steel tanks are temperature-controlled. In the winery, my philosophy is non-interventionist. No inoculation, no enzymes and no additives, and fermentation is only conducted by wild indigenous yeasts. Pigeage and remontage are carefully led to fulfill gentle extraction of the polyphenols and especially the tannins throughout the fermentation period. Malolactic fermentation is allowed to occur naturally in barrels. The wines are aged between 12 and 15 months in barrels, and the proportion of new French oak remains reasonable, up to 40% for the Grand Crus.”

“We mainly work with Tonnellerie de Mercurey and Damy, and to a lesser extent with Eric Millard and François Frères. In an average crop there are around 13 barrels. Strict selection is made on quality of the wood through our suppliers to keep the authenticity of the wines, and a blind tasting is organized to refine the selection of the wood and the light toasting. The wine is racked and placed in tanks for the last three months so that the fine lees can settle down, then bottled unfined and generally unfiltered by our own means. I have used Diam cork for our whole range since the 2013 vintage.” 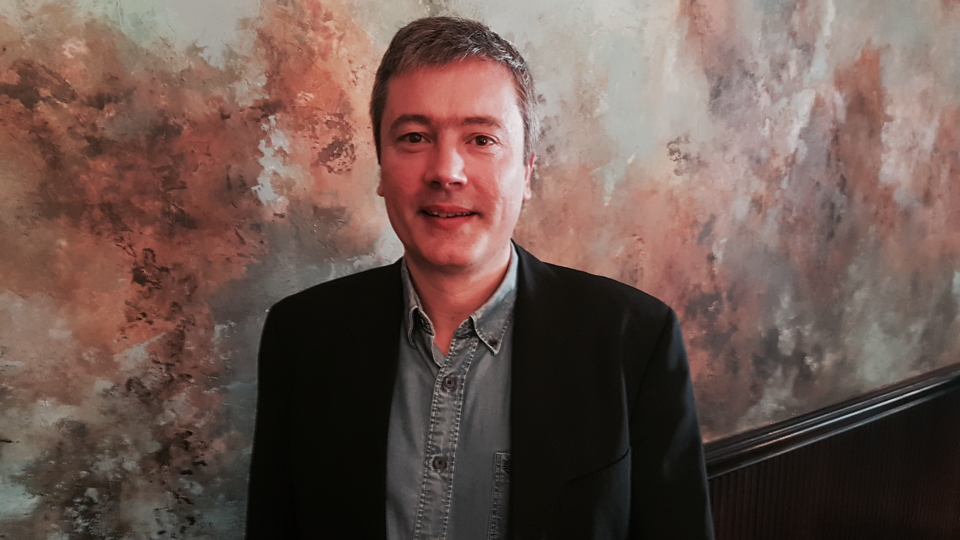 Romain Taupenot, pictured in 2018 at the same restaurant, La Cabotte.

The tasting covered a range of vintages from 2002 to 2017. The highlights were, predictably, a quite brilliant 2010 Mazoyères-Chambertin so crystalline and pure that it took my breath away, and a sublime 2016 that kept reeling you in for “just one more sip.” I found an attractive underlying tertiary note that is certainly revealed by bottle age, and also the floral element that Taupenot mentioned – not the more obvious violet scents one associates with Vosne-Romanée, but more discreet. Overall, the wines are more consistent in the “tens” than the “noughties.” Both the 2007 and the 2008 lacked the sophistication of subsequent releases.

It was an extremely useful tasting, highlighting not only a domaine that, for this writer, is one of the finest in Morey-Saint-Denis, but also the frequently overlooked vineyard itself, so often subsumed into its “charming” neighbor. At least in recent years I have noticed more growers willing to give Mazoyères its fair share of the spotlight. It might not command the reverence of Gevrey’s noblest Grand Crus, but it often reveals a more elegant, understated side of the appellation, and in my experience it can be deceptively long-lived.

I just need to make sure that on the rare occasions when I am able to taste a vertical of Mazoyères-Chambertin, I don’t mislay my notes.